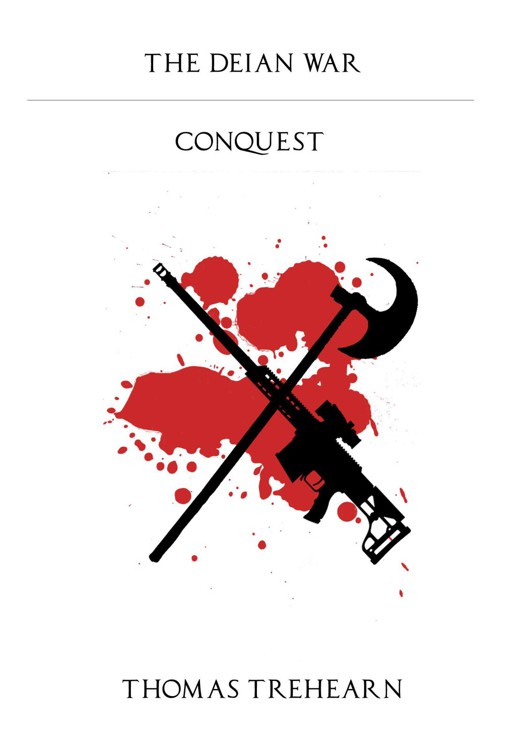 The Deian War: The Vermillion Apostles

THE BLACKSTAR NIMERIAN was not a stealth ship in the conventional
sense. It used no advanced countermeasure systems to shield their presence from any unwanted attention, nor did it have a cloak to conceal them - at least, not in the way the humans would imagine it. Instead, the psychic aura surrounding the vast vessel was what kept it hidden, secure from the ever-wary gaze of the orbital platforms surrounding Gothica like a protective net.

The capital planet of the now-stagnant human Empire had been
heavily guarded since the beginning of the Colonisation Wars, almost half a century before. At the end of that conflict, with a hundred worlds conquered, Gothica had not been in realistic need of such protection at its core. Yet, the Senate was far from satisfied to move the Sentinels to less protected locations. The outer worlds and the Frontier were enough of a barrier to stem any potential invasion, but Gothica was key; its safety could never be compromised, even if it seemed no enemy could even reach it.

However, now the threat of war from multiple angles was rising again. From the north
-west the Phantoms moved ever inwards to the Empire’s core system, the Meridian Sector. To the east of the Empire, the Titan Sector and The Shield stood vigilant against the ever-present danger of an assault from the inter-galactic Vorlan Conglomerate.

No one was quite sure of the
jeopardy the Vorlans presented, however one thing was for certain; they did not come from a neighbouring star system, but rather a neighbouring galaxy. Whether this meant they had conquered the worlds of their own home, or were fleeing into the Gothican Empire from their own conquerors, was something that had been debated by every human alive since the Vorlans first appeared as a small scouting party. They had given the Empire only one message, translated to the human language by unknown means; the Empire was in their way.

To Raina, the Third Apostle
who was known as Valkyrie to the humans and Black Guardian legions alike, such debate over the intentions of the Vorlans was below her. It was not that the truth did not bother her, but she had more pressing matters to deal with. She had been in the Meridian Sector for almost two years now, arriving just three months after the fall of Pheia. Her task was to monitor the Gothican Senate, to determine their motives and desires, not those of an enemy she hadn’t even witnessed herself.

Sitting on the command throne of her flagship
Nimerian
, the only Black Guardian ship that now remained in the humans’ home star system unbeknownst to them, she remembered with enmity and regret the day they had failed the Empire. It had been a trap, there was no mistaking that, but she could not help feeling it was a trap the Lion should have seen.

That name again…the Lion. It spoke of strength, of
valour, of noble intellect…yet where had those factors been when that world fell to the enemy? Where had those characteristics been when the First Apostle marshalled the legions to liberate Pheia and secure an early victory against the Phantoms? It was him that was outsmarted, not them.

The irony almost made her laugh. Almost. The memory of watching the world being swallowed into a black hole was too painful to bear, even to allow the morbid humour of Waterfox.
Remarkably out of character, he had not managed to bring some levity to the catastrophe.

Yet
all was not lost. From the ashes of their shameful defeat, the Apostles had risen stronger and more determined. They would win the war, whatever it took, and they would save the human race from destruction. They would defeat the Great Enemy, cast his carcass into the heart of a sun and be done with it.

That eventuality was a long way of
f though and they all knew it. With the Phantoms spread far and wide, millions to the west against the Ghoul Hosts and millions more to the east to consume more human worlds, the Apostles had little choice but to divide their forces. It was as the youthful, deceptively gentle Solitaire had predicted; the Great Enemy wanted to toy with them, give them the false hope that they could win this fight.

The Phantoms relied on sheer numbers and horror to sway the tide of battle, but the Black Guardians were the armies created by the
deities; the real, but long-dead ones. With precision and strategy, they stood a chance of holding the foe at bay, divided as they were.

Raina allowed herself to smile as she thought of the nature of her little sister Solitaire. The woman - a fact that the Apostles had
an unintended habit of forgetting due to her childish ways - was as militarily brilliant as she was beautiful, which was beyond measure. Stationed in the Orpheus Sector alongside Phoenix and Waterfox, the Ninth Apostle had already claimed the kills for several of the Great Enemy’s fiercest lieutenants.

A fierce Admiral, Solitaire was proving to be the most capable of them all, taking her fleet to intercept, engage and destroy the enemy forces trying to break through to the southern Empire. The Phantoms would never get through while she defended the line, Raina
believed.

Thoughts of her naturally reminded
Raina of the other Apostles. In the north-east, Nightingale and Cerberus were fighting side-by-side in the Tempest Sector. With their kin in the Orpheus Sector, they helped to protect both the Empire’s territories and those of the Independent Worlds. The fighting was fiercest there, with major conflicts already claiming the outlying worlds of Perth and Volantia. It seemed inevitable that eventually the Phantoms could threaten two Apostle homeworlds; the jungle world of Eve, which belonged to Gaia and Noiran, the shadow planet of Solitaire and Phoenix. It had only been through the combined and relentless efforts of the Fifth and Sixth Apostles and their assembled might of 43 legions that the enemy was kept from reaching those worlds.

Muletrain to Maggody by Joan Hess
Sorcery Rising by Jude Fisher
Keeper of my Heart by Laura Landon
After Midnight by Kathy Clark
The Atonement by Beverly Lewis
HT02 - Sing: A Novel of Colorado by Lisa T. Bergren
The Mysterious Island by Tony Abbott
One Hundred & Thirty-Six Scars (The Devil's Own, #1) by Jones, Amo
Duck & Goose, How Are You Feeling? by Tad Hills
Timetable of Death by Edward Marston
Our partner