Read The Dream: How I Learned the Risks and Rewards of Entrepreneurship and Made Millions Online

The Dream: How I Learned the Risks and Rewards of Entrepreneurship and Made Millions

BOOK: The Dream: How I Learned the Risks and Rewards of Entrepreneurship and Made Millions
5.91Mb size Format: txt, pdf, ePub
Read Book Download Book
ads 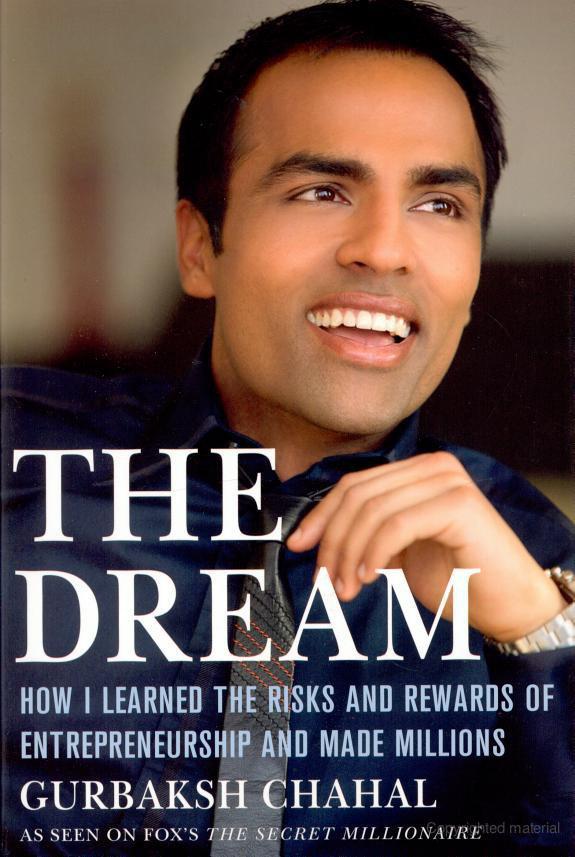 Where this book is distributed in the UK, Europe and the rest of the world, this is by Palgrave Macmillan, a division of Macmillan Publishers Limited, registered in England, company number 785998, of Houndmills, Basingstoke, Hampshire RG21 6XS.

Palgrave Macmillan is the global academic imprint of the above companies and has companies and representatives throughout the world.

Palgrave® and Macmillan® are registered trademarks in the United States, the United Kingdom, Europe and other countries.

The dream : how I learned the risks and rewards of entrepreneurship and made millions / Gurbaksh Chahal.

A catalogue record of the book is available from the British Library.

This book is for my father,
who taught me the importance of perseverance;

for my mother and grandmother,
who showed me the true meaning of love;

and for my three siblings,
who have been there for me every step of the way
.

4.   From Bollywood to BlueLithium

7.   The Lessons of Entrepreneurship

I
would like to thank, first and foremost, my brother Taj, who was there when it all began; my sisters, Nirmal and Kamal, whose love and support have always meant the world to me; my agent, Mel Berger, my publisher, Airié Stuart, and my cowriter, Pablo Fenjves, who subjected me to the most humbling and best therapy session of my life; and of course God, for giving me the willpower to reach my dreams so early in life.

W
hen I was sixteen years old I started a company in my bedroom, and within a few months I knew exactly what I wanted to do with my life: I would become an entrepreneur. There was one thing standing in my way, however: school. If I was going to pursue my goal, I would have to do it full time, and I needed my father’s permission to drop out. This
wasn’t going to be easy. More than a decade earlier, my family had come to America from India, settling in a one-bedroom apartment in a marginal section of San Jose, California. My father had arrived with $25 in his pocket, but his heart was full of dreams. “Education, education, education!” he would say, repeating it as if it were a mantra. “Education is the key that opens all the locks to all the doors in the world. My four children will become doctors and engineers. Maybe even both!”

I realized I couldn’t bear another day of school, and I was ready to take the biggest risk of my life. It was the defining moment that every entrepreneur eventually faces in one form or another. I had to have
The Talk
with my father. I was terrified about approaching him. He was a man who valued education above almost everything else. How could I tell him I wanted to drop out of high school? Then again, if I was to pursue my dreams, how could I not?

Finally, one night after dinner, I braced myself and plunged in. “Dad, there’s something we need to talk about,” I said. I had a hard time meeting his eyes, so I focused on his turban
.

“You know that stuff I’ve been doing in my room?”

“As long as it’s not interfering with school,” he said
.

Man, was I in trouble. But I felt compelled to press on
.

Hesitantly I showed him my bank statement—the balance had edged north of $100,000. My father’s hand flew to his chest, like a man on the verge of a heart attack. “W-what is this? W-where did you get all this money?” He turned toward the kitchen and hollered for my mother. “Gurbaksh is going to jail!”

My mother came running from the kitchen, eyes wide with alarm. “What did you say? To jail? Who is going to jail?”

When they were somewhat calmer, I proceeded to explain how I’d spent the past six months studying the dot-com market, watching young companies grow very rich, very quickly, and trying to figure out how they did it. One of them, DoubleClick, had piqued my interest, primarily because it was among the first companies to put advertising on the World Wide Web. People were spending more and more time on the Internet and less time reading newspapers and magazines or parked in front of their television sets, and traditional advertising was rapidly losing ground. The Web was fast becoming the next big sales tool
.

But my parents weren’t really listening. “I had hoped you would become a doctor,” my father said, looking at me balefully
.

Two days later, my father agreed to drive me to school to talk to the principal, and I was so grateful that I was near tears, but we
Chahals are not emotional men, so I simply thanked him for believing in me
.

“You better not,” he said. “Because I’m giving you exactly one year to prove yourself.”

“Yes. One year. If this Internet business doesn’t work out, you’re going right back to school.”

When we reached the campus, we parked and I led my father to the principal’s office. He got to the point without wasting any time. “My son is dropping out,” he said
.

“He has never liked school. He is going to do bigger things.”

By midsummer, after barely six months in business, I was posting revenues of $300,000 per month. And two years later, shortly after my eighteenth birthday—in what turned out to be one of the very first things I did as an adult—I sold my company for $40 million
.

That was only the beginning
.

I
was born in Tarn Taran, near Amritsar, in Punjab, India, on July 17, 1982, the youngest of four children, into a traditional Sikh family. My father studied hard and went to college, hoping to become an engineer, but when he graduated he couldn’t find a satisfying job and joined the police academy. He and my mother met in 1971, a match arranged
by their families, and were married that same year. She was a nurse and enjoyed a modicum of independence, but in most ways she was a traditional Indian woman. She had been taught that life revolves around the head of the household, the man, and she believed this to her core. When my father made a decision, she followed it without question. I would later find myself struck by this because her own family had actually pushed her to become independent, which in India—for people of a certain class—can only mean one of two careers: medicine or engineering. My mother wasn’t interested in engineering, and she didn’t think she had the patience or the stamina to become a doctor, so she settled for nursing, and she continued to work after she was married. In reality, though, after marriage her life was no longer her own. From that day forth, she did as she was told.

“It is the way it is,” my mother often said.

In 1973, a year after they were married, my parents had their first child, a daughter, Kamal. Two years later, they had another daughter, Nirmal. This was a blow. In India, families want sons. A son is a potential breadwinner. And a son carries the family name and legacy into the future.

At this point, my parents decided to put their future in God’s hands, and they both became exceedingly spiritual. They made frequent trips to the
gurdwara
, a Sikh temple, asking for a son, and they even prayed together at home.

Gurbaksh (left) in India with his grandmother and brother Taj
.

Finally, late in 1978, my mother became pregnant again, and the following year they had a son, my brother, Taj. This was one of the greatest moments of their lives. God had listened to their prayers. They had a son! They were ecstatic.

Then they decided to try again. They thought the family would feel more balanced with two girls and two boys. They knew that perhaps they were being a little greedy, but the heart wants what it wants.

Again they went off to various
gurdwaras
to pray, and again they prayed at home. Again they gave God time to
consider their request, and again their prayers were answered. When I came along in 1982, they named me Gurbaksh, which in Punjabi means “a gift from God.”

Gift or not, those were unstable times in India. On June 3, 1984, two years after I came along, a group of separatists, looking to create an autonomous Sikh state within India’s borders, demonstrated at the Golden Temple, the holiest of Sikh shrines. Indira Gandhi, the prime minister, ordered the army to clear the site, and there were many casualties—most of them Sikhs. To this day, the action is considered an unprecendented political disaster in modern Indian history.

BOOK: The Dream: How I Learned the Risks and Rewards of Entrepreneurship and Made Millions
5.91Mb size Format: txt, pdf, ePub
Read Book Download Book
ads

Separate Kingdoms (P.S.) by Laken, Valerie
Confessions of a Call Center Gal: a novel by Lim, Lisa
Wishes on the Wind by Elaine Barbieri
Rescuing the Captive: The Ingenairii Series by Jeffrey Quyle
Never Let Go by Sherryl Woods
Ten Girls to Watch by Charity Shumway
Valley of Dry Bones by Priscilla Royal
The Secret Friend by Chris Mooney
Choke: A Thriller by Amore, Dani
Shirley by Charlotte Brontë
Our partner