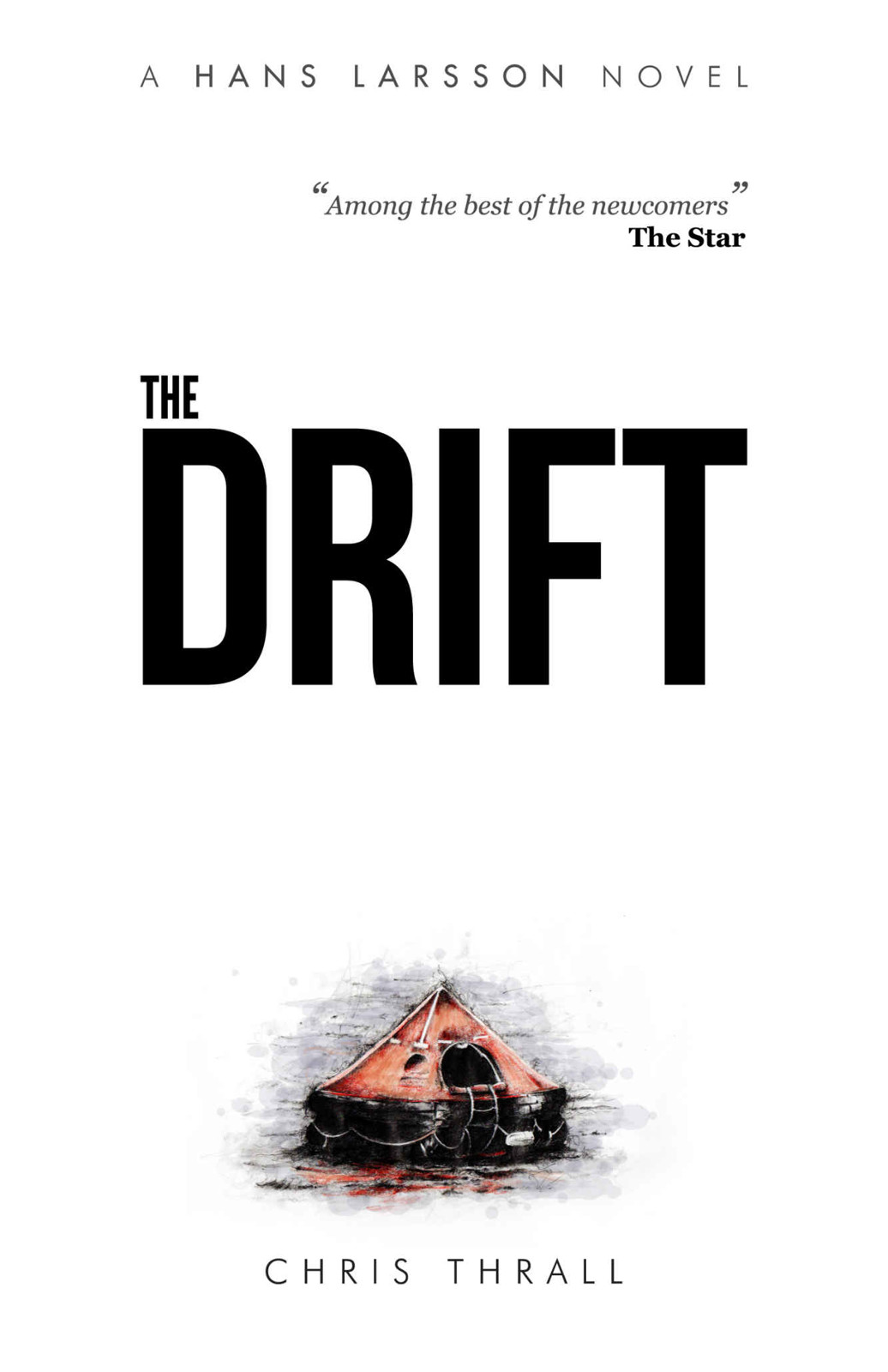 The characters in this
book are fictitious, and any resemblance to actual persons, living or dead, is purely
coincidental.

T
he
man stirred, believing he was aboard the yacht. As he opened his eyes, orange
gloom brought reality crashing home.

What happened to his little girl? He lifted his head.

She lay at rest, an arm outside the sleeping bag, a damp
lock stuck to her brow.

The trip had seemed a good idea after what happened, a
chance to bond and rebuild life after loss. Now, seeing her infant face,
acquiescent and trusting, he felt guilty they ever set sail.

The raft was awash, but it did not matter. The yacht sat
on
the bottom of the Atlantic, but he did not care so long as he had her.

He fumbled with the zipper in the canopy’s thin fabric,
needing light to check the ditch kit for the emergency radio and beacon. He’d searched
for them last night, until shock and exhaustion overcame him.

The seascape should have been something to behold. Ruffled
by the breeze, the aqua-green plane spilled lazily to the horizon under a deep-blue
sky touched with delicate sprays of white. A lone gull circled in the salt air,
mewing in anticipation of any bounty this orange dot might bequeath. Something
to behold from the safety of a yacht perhaps, but from the flimsy cocoon, not a
sight any sailor wished to see.

“Can we go back now?” she asked, rubbing sleep from her
eyes.

The man pulled the ditch kit toward him, an unwelcome wave
of salt water accompanying it across the rippling rubber floor. He’d packed it
himself, putting in all that is necessary to survive lost at sea. Most
importantly, it contained a handheld radio and emergency beacon.

He unzipped the bag and rummaging through its contents but found
neither. He gave the girl a look. “Have you been playing with this?”

She gave him a look back. It said everything but nothing.

The man stared out across nature’s glassy face. They truly
were adrift.

Leaning out, he half expected to see the upturned hull of
Future
floating nearby. Perhaps he could lash the life raft to it, making a bigger
target for search and rescue. Maybe he could dive below, holding his breath
long enough to swim into the cabin and locate the lost equipment and other vital
survival stores.

Then
there
she was! Their beautiful yacht!

Bursting to the surface like a submarine, looking as
splendid as the day he bought her, sleek lines and powerful rigging, buoyant as
a cork atop the shimmering ocean.

Then she vanished, a wet wilderness replacing her.

A
s
the 747 climbed out of LaGuardia, the North Atlantic edged into view. Hans Larsson
couldn’t quite believe that in a few days’ time he would begin sailing back
across this vast gray tract. Stranger still, it would be in a boat he did not
yet own and with seven-year-old Jessica by his side.

The original plan had been to make a double crossing of the
Pond, stopping at the Azores en route to England and returning via Cape Verde, the
Caribbean and then north on to Maine. Jessica’s brother, JJ, would have been
great company for her as they explored the open ocean as a family, and Mom
could have taken turns at the helm and shared the schooling.

Only now it was just two of them, Hans felt it inappropriate
for Jessica to spend such a long time at sea. He was determined, though, to see
at least a part of the Larsson dream through, opting to fly to England with his
daughter, purchase a yacht and sail the southerly passage home. It would be
their special time. One he would treasure forever.

“Would you like a drink, sir?” whispered the female flight
attendant, smiling at Jessica curled up asleep hugging her teddy. Since the
incident, she and Bear had been inseparable, something which brought tears to
Hans’ eyes if he dwelt too long on it.

“A Budweiser please.” He smiled, settling into his seat to
take in the great ocean below.

Hans had not had the easiest of upbringings, which resulted in
him being unable to concentrate in class. The one escape he had as a youth was
the sea, his grandfather treating him to an aging wooden daysailer for his
twelfth birthday. In the final year of high school, Hans would give his name
for the morning register and then disappear to spend the day exploring the
inlets around Misty Port.

Local fishermen befriended him, giving advice on bait and
tackle and the best locations to drop his line. He would reel in cod, bluefish
and striped bass, selling them to fishmongers in the market and putting the
money toward repairs to his boat. When fishing proved futile, he would anchor
in a cove and get lost in books – anything to do with the sea or stories of
adventure.

Other times he would don a mask and snorkel and dive down holding
his breath for minutes at a time, like the pearl divers in the South Pacific
islands he read about, to hook lobster and crab from rocky hidey-holes with a
homemade gaff. Grilling them on an oilcan barbeque was a real treat,
particularly in the winter, when he would huddle close to the embers and rewarm
his shivering self after a dip in the bitter Atlantic.

One afternoon, as Hans cruised a mile offshore he saw a
Cessna returning to the local airport with its wings rolling from side to side
and its engine sputtering. Forced to accept fate, the pilot eased back the
stick, flaring the aircraft into an attitude best suited for impact. Its
undercarriage raked through the wave crests at speed before shunting into a
roller.
For a moment it looked as if the plane would flip forwards, like
an ungainly seabird, before settling back onto its fuselage.

Hans brought
Bella
sharp about and, tacking into a
stiff headwind, fought to reach the downed plane’s occupants before it was too
late. By the time he got there, the pilot and his wife were in shock, both with
deep gashes to the head pumping out rivers of blood as they clung to the
sinking airframe.

Although hailed a hero by many in the community, Hans
received a thrashing from his stepfather and a six-month grounding. The
after-school detentions he could have dealt with. Foregoing his beloved sailing
he could not. It came as no surprise when he joined the US Navy at seventeen,
serving as a radar operator aboard USS
Nimitz
before a thirst for
adventure saw him volunteer for “other” operations.

From London Heathrow they took a black cab across town to
Paddington Station. Hans pointed out the capital’s landmark edifices to Jessica
– the short, squat Gherkin building, clad in iconic green-and-black-mirrored
whorls; Canary Wharf’s metallic towers of commerce; and a gigantic space-age
Ferris wheel, the London Eye. They boarded a southbound train to Plymouth, the English
countryside prevailing as quaint red phone booths, roads not wide enough for
golf karts, and aging stone farmhouses whizzed by. Hans felt he was doing a
great job of keeping his little girl occupied, although in truth the Old
Country fascinated him a lot more.

In three short hours the carriages hugged the Devon
coastline, carving around towering sandstone cliffs, the sea pounding against
rocks just feet below the tracks. Further south the scenery morphed into a rich
tapestry of agriculture, fringed by deciduous trees, before becoming slowly grayer
as Plymouth’s urban spread took hold.

“I have
not
gotta funny face, Papa!”

Hans chuckled and tickled Jessica’s tummy. He loved the fact
his daughter could take a joke and her cute attempts at defense.

The Trapthorn Plaza did not look as inviting up close as it did
on its website – “Eastern Bloc” might better describe the weathered-concrete
beast – but as Hans booked in at the front desk, he wasn’t bothered. Crossing the
Atlantic occupied his mind.

“So, Jessie. Now we’re unpacked, we need to have a crew
briefing.”

“It’s where the people who are gonna be on this boat – that’s
me and you – get told what they need to do. I think we should have a crew
briefing over a Coca-Cola in the bar. What do you think?”

The plan was simple. Hans had arranged to view some of the
boats for sale in a local marina. Having bought one, he would sort out any
repairs and upgrades and recruit an additional crew member to help with the sailing.
He hoped that together with provisioning the yacht, this would take no more
than a week, allowing them time to explore the historic port of Plymouth before
departure.

“So, do you think you can help me choose a boat, First Mate?”

The Unseen by Nanni Balestrini
Exile by Denise Mina
The Cannibal by John Hawkes
House Arrest by K.A. Holt
Seeds of Rebellion by Brandon Mull
Centuries of June by Keith Donohue
Desperate Acts by Don Gutteridge
Scorch by Dani Collins
Trouble by Jamie Campbell
In the Last Analysis by Amanda Cross
Our partner