The Enraged (A Jonathan Quinn Novel) 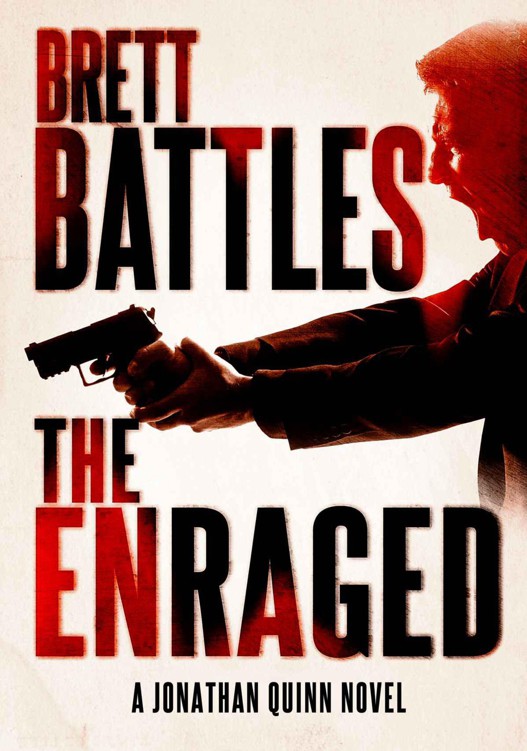 The rescue on Duran Island did not go as planned.

Jonathan Quinn knows that someone is responsible. That someone decided throwing people he cares about into the line of fire in a cold-hearted act of self-preservation was a good idea. He also knows this someone has made a serious mistake.

Because when Quinn gets mad, the last place anyone should ever be is in his crosshairs. He will not stop until the guilty pay.

PRAISE FOR THE JONATHAN QUINN SERIES

“
Off the Clock”—A Jonathan Quinn Story

THE PULL OF GRAVITY

THE ENRAGED Copyright © 2013 by Brett Battles

THE ENRAGED is a work of fiction. Names, characters, businesses, organizations, places, events, and incidents either are the product of the author’s imagination or are used fictitiously. Any resemblance to actual persons, living or dead, events, or locales is entirely coincidental.

For more information about the author, please visit
www.brettbattles.com
.

This one’s dedicated to my amazing fans,

for all the support you’ve given me over the years.

I can’t thank you enough,

but I’ll say it anyway:

“H
OW MANY OTHERS
know?”

Jonathan Quinn made no response, his eyes focused across the room as if he were the only one there.

Not a blink. Not a flinch.

“Your silence won’t save anyone. I’ll find them like I found you.”

The corner of Quinn’s mouth drifted up as he finally looked back at the man.

“What makes you think
you
found
me
?”

The man’s stare turned into a sneer, and his mouth opened to reply.

In an instant, darkness filled the room.

It wasn’t that she was in a meeting or otherwise occupied and hadn’t seen it. She had been sitting at her desk when her computer softly dinged, announcing the e-mail’s arrival.

There were times when she would ignore incoming messages for hours or even days. But this wasn’t one of those. This one she’d been expecting, had even called to make sure she would receive it as scheduled.

She knew much of what was written in the attached report, and had already seen most of the accompanying photos. So why was it so hard to open?

There was only one answer, of course. Acceptance, for reading the report meant she would finally have to acknowledge Peter was dead.

Ironic, she knew. It wasn’t like death was something she never had to deal with. In her line of work, it was a common occurrence. As head of a growing network of government security and intelligence agencies, she had long ago hardened herself to the reality that people in the business died. Information gathering, targeted terminations, asset acquisitions—these were some of the elements that made up her day. So another death should have been just that.

No emotional attachment. Accept and move on.

And yet here she was, her personal feelings affecting her job.

When the e-mail first arrived, she told herself she had more important things to attend to. Which was true, but they were dealt with in a matter of minutes. Everything after that was just busywork.

Except the unopened e-mail.

She stared at her monitor, the cursor positioned over the message. “Damn you, Peter,” she said, and clicked.

She downloaded the report, ran it through her decryption software, and opened the resulting file. The report concerned events that had taken place on Duran Island in the Caribbean Sea, forty-eight hours earlier. Most of the information had come from sources within the Isla de Cervantes government. Their security forces had responded to the call that something had happened on the smaller island. When they arrived, they had found over a dozen bodies laid out side by side in the old fort that dominated the strip of land. The only people found alive were locked together in a different room upstairs, all of them uninjured.

Among the dead was Duran Island’s owner, the former Isla de Cervantes presidential candidate Javier Romero. According to preliminary interviews with the survivors—all of whom appeared to have been in service positions for Romero, such as nurses, maids, and cooks—Romero had built up a small army, and then forcibly brought in several men, all hooded and bound, and locked them in cells inside the fort. There was some discrepancy about how many men had been held captive—some said five, others said as many as ten—but all agreed that the detainees had been tortured multiple times.

Apparently these same men had somehow escaped, and turned the tables on Romero and his forces, killing most of them before leaving the island. Isla de Cervantes officials also believed that it was someone connected to the escapees who had called in the tip about Duran, and provided information about a boatload of Romero’s men who’d fled the fight and were sailing for Isla de Cervantes.

In addition to the dead at the fort, the security forces had discovered two more bodies along an empty runway on the other side of the island. Though officials had no idea who they were, Helen’s people had been able to identify them after running photographs of the dead men through a facial recognition system.

The big man was named Janus. According to the file in the archives, he worked mainly as hired muscle for whoever was willing to pay.

The older man, though, was Peter, former head of a defunct agency known as the Office.

The Office was the organization Helen’s own core agency had been created to replace. She had been apprehensive about taking the job at the time. Peter had always been a friend, and, in many ways, a mentor. Though she knew it was an excellent opportunity, without Peter’s blessing she would have declined the assignment. He had given it without hesitation.

The two of them hadn’t always seen eye to eye, but Peter had never refused to take her calls, and had often been the only person she could turn to for advice.

The few additional details contained within the report that weren’t part of her original briefing were minor at best, and unimportant. She ignored the photos of the dead, and clicked through to the back of the report to read a short analysis prepared by her people.

It was her team’s belief that the deaths had been a result of an act of revenge gone wrong, its roots stretching back several years to when Javier Romero had made his run for president of Isla de Cervantes.

At the time, it was the opinion of nearly every nation in the western hemisphere that a Romero presidency would have been a catastrophe that could have created a ripple effect, not just through the Caribbean, but also through Latin America.

A plan was put in place, and a termination team was dispatched to remove any chance of Romero winning the election. While the mission failed in its surface goal of eliminating Romero, the long-term goal of keeping him out of office was achieved, due to the severe injuries he incurred during the attempt on his life.

The Office supervised the project. Given the presence of that organization’s former director, and the obvious abilities of the men who had been held with him and subsequently escaped, it is believed that Romero had rounded up the team sent to kill him years before so he could avenge what they had done.

Rise From Darkness by Ciara Knight
A Very Merry Christmas: WITH "Do You Hear What I Hear" AND "Bah Humbug, Ba by Lori Foster, Janice Maynard, Gemma Bruce
The Promised World by Lisa Tucker
House Party by Patrick Dennis
Ice and Peace by Clare Dargin
Death Will Extend Your Vacation by Elizabeth Zelvin
Side Effects by Michael Palmer
Safeword Quinacridone by Candace Blevins
Fire: Tales of Elemental Spirits by Robin McKinley, Peter Dickinson
080072089X (R) by Ruth Axtell
Our partner