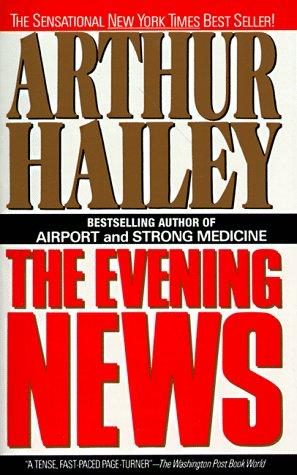 INDIVIDUAL SALES Are there any Dell books you want but cannot find in your local stores? If so, you can order them directly from us. You can get any Dell book in print. Simply include the book's title, author, and ISBN number if you have it, along with a check or money order (no cash can be accepted) for the full retail price plus $2-00 to cover shipping and handling. Mail to: Dell Readers Service, P.O. Box 5057, Des Plaines, IL 60017. ARTHUR HAILEY
THE EVENING NEWS A Dell Book

The characters in this book are fictitious and any resemblance to actual
persons, living
or dead, is purely coincidental
Excerpt from "Dane-geld
”
copyright 1911 by Rudyard Kipling. From
Rudyard Kipling's Verse.- Definitive Edition. Reprinted by permission ofDoubleday, a division of Bantam Doubleday Dell Publishing Group, Inc
.”

I'll Be Seeing You
”
copyright @ 1939 by Williamson Music Co.,copyright renewed. Used by permission. All rights reserved
.”

A
ll rights reserved. No part of this book may be reproduced or transmitted in any form or by any means, electronic or mechanical, including photocopying, recording, or by any information storage and retrieval system, without the written permission of the Publisher, except where permitted by law.

T
he trademark [email protected] is registered in the U.S. Patent and TrademarkOffice.

Reprinted by arrangement with Doubleday

To Sheila and Diane
with special gratitude
and to
my many friends in the media
who trusted me
with
off-the-record information
.

Author's Note: In Frederick Forsy
th's novel The Day of the Jackal
published 1971, an assassin obtains a fraudulent British passport. In The Evening News, a terrorist obtains such a passport-in a differing way, the description the result of my own research
.
However, I acknowledge that in this matter, Mr. Forsyth's footprints were
there first. -A.H
.

At CBA Television News headquarters in New York, the initial report of a stricken Airbus A300, on fire and approaching Dallas-Fort Worth Airport, came only minutes before the network's first feed of the National Evening News
.
It was 6:21 P.m. eastern daylight time when CBA's bureau chief at Dallas
told a producer on the New York Horseshoe through a speakerphone, "We're
expecting a big aircraft crash at DFW any moment. There's been a midair
collision-a small plane and an Airbus with a full passenger load. The small
plane went down. The Airbus is on fire and trying to make it in. The police
and ambulance radios are going wild
.”

another Horseshoe producer said
.”
What's our chance of getting
pictures
?
”

The Horseshoe, an outsize desk with seating for twelve people, was where
the network's flagship news broadcast was planned and nurtured from early
each weekday morning until the last second of air time every night. Over
at rival CBS they called it the Fishbowl, at ABC the Rim, at NBC the Desk
.
But whichever name was used, the meaning was the same
.
Here, reputedly, were the network's best brains when it came to making
judgments and decisions about news: executive producer, anchorman, senior
producers, director, editors, writers, graphics chief and their ranking
aides. There were also, like the instruments of an orchestra, a half-dozen
computer terminals, wire news service printers, a phalanx of
state-of-the-art telephones, and TV monitors on which could be called up
instantly anything from unedited tape, through a prepared news segment ready for broadcast, to competitors' transmissions
.
The Horseshoe was on the fourth floor of the CBA News Building, in a
central open area with offices on one side-those of the National Evening
News senior staff members who, at various times of day, would retreat from
the often frenzied Horseshoe to their more private work quarters
.
Today, as on most days, presiding at the Horseshoe's head was Chuck Insen
,
executive producer. Lean and peppery, he was a veteran newsman with a print
press background in his early years and, even now, a parochial preference
for domestic news over international. At age fifty-two Insen was elderly by
TV standards, though he showed no sign of diminished energy, even after
four years in a job that often burned people out in two. Chuck Insen could
be curt and often was; he never suffered fools or small talk. One reason:
under the pressures of his job there wasn't time
.
At this moment-it was a Wednesday in mid-September
the pressures were at
m
aximum intensity. Through the en
tire day, since early morning, the lineup
of the National Evening News, the selection of subjects and their emphasis
,
had been reviewed, debated, amended and decided. Correspondents and
producers around the world had contributed ideas, received instructions and
responded. In the whole process the day's news had been whittled down to
eight correspondent reports averaging a minute and a half to two minutes
each, plus two voice-overs and four "tell stories
.”

A voice-over was the
anchorman speaking over pictures, a "tell story
,”
the anchorman without
pictures; for both the average was twenty seconds
.
Now, suddenly, because of the breaking story from Dallas and with less than
eight minutes remaining before broadcast air time, it had become necessary
to reshape the entire news lineup. Though no one knew how much more
information would come in or whether pic
tures would be available, to in
clude the Dallas story at least one intended item had to be dropped, others
shortened. Because of balance and timing the sequence of stories would be
changed. The broadcast would
start while rearrangement was continuing. It often happened that way
.”
A fresh lineup, everybody
.”

The crisp order came from Insen
.”
We'll go
with Dallas at the top. Crawf will do a tell story. Do we have wire copy
yet
?
”

The answer was from Crawford Sloane, the
anchorman. He was reading an Associated Press bulletin printout handed
to him moments earlier
.
Sloane, whose familiar craggy features, gray-flecked hair, jutting jaw
and authoritative yet reassuring manner were watched by some seventeen
million people almost every weeknight, was at the Horseshoe in his usual
privileged seat on the executive producer's right. Crawf Sloane, too, was
a news veteran and had climbed the promotion ladder steadily, especially
after exposure as a CBA correspondent in Vietnam. Now, after a stint of
reporting from the White House followed by three years in the nightly
anchor slot, he was a national institution, one of the media elite
.
In a few minutes Sloane would leave for the broadcast studio. Meanwhile
,
for his tell story he would draw on what had already come from Dallas
over the speakerphone, plus some additional facts in the AP report. He
would compose the story himself. Not every anchor wrote his own material
but Sloane, when possible, liked to write most of what he spoke. But
he
had to do it fast
.
Insen's raised voice could be heard again. The executive producer
,
consulting the original broadcast lineup, told one of his three senior
producers, "Kill Saudi Arabia. Take fifteen seconds out of Nicaragua
.
.
.”

Mentally, Sloane winced on hearing the decision to remove the Saudi
story. It was important news and a well-crafted two and a half minutes
by CBA's Middle East correspondent about the Saudis' future marketing
plans for oil. But by tomorrow the story would be dead because they knew
that other networks had it and would go with it tonight
.
Sloane didn't question the decision to put the Dallas story first, but
his own choice for a deletion would have been a Capitol Hill piece about
a U.S. senator's malfeasance. The legislator
had quietly slipped eight million dollars into a gargantuan appropriations bill, the money to oblige a campaign contributor and personal friend. Only through a reporter's diligent scrutiny had the matter come to light
.
While more colorful, the Washington item was less important, a corrupt
member of Congress being nothing out of the ordinary. But the decision, the
anchorman thought sourly, was typical of Chuck Insen: once more an item of
foreign news, whose emphasis Sloane favored, had gone into the discard
.
The relationship between the two--executive producer and anchorman-had
never been good, and had worsened recently because of disagreements of that
kind. Increasingly, it seemed, their basic ideas were growing further
apart, not only about the kind of news that should have priority each
evening, but also how it should be dealt with. Sloane, for example, favored
in
depth treatment of a few major subjects, while Insen wanted as much of
that day's news as could be crammed in, even if-as he was apt to express
it-"we deal with some of the news in shorthand
.”

In other circumstances Sloane would have argued against dropping the Saudi
piece, perhaps with positive effect because the anchorman was also
executive editor and entitled to some input--except right now there wasn't
time
.
Hurriedly, Sloane braced his heels against the floor, maneuvering his
swivel chair backward and sideways with practiced skill so that he
confronted a computer keyboard. Concentrating, mentally shutting out the
commotion around him, he tapped out what would be the opening sentences of
tonight's broadcast.

From Dallas-Fort Worth, this word
just in on what may be a tragedy in
the making. We know that minutes ago there was a midair collision
between two passenger planes, one a heavily loaded Airbus of Muskegon
Airlines. It happened over the town of Gainesville, Texas, north of
Dallas, and Associated Press reports the other plane--a small one, it's
believed-went down. There is no word at this moment on its
fate or of
casualties on the ground The Airbus is still
in the air, but on fire as its pilots attempt to reach Dallas
Fort Worth Airport for a landing. On the ground, fire fighters and ambulance crews are standing by . . .