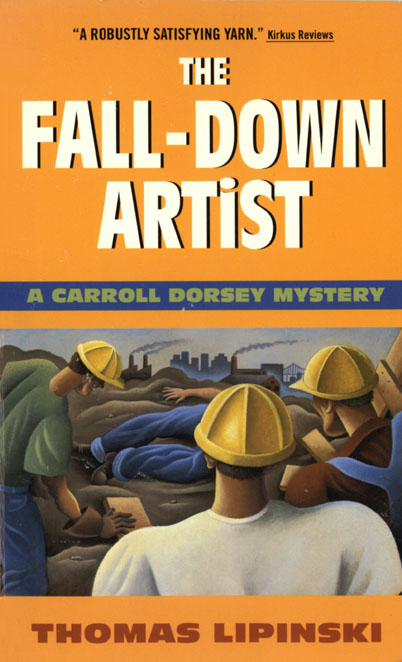 Instinctively, Dorsey dropped to the sidewalk on all fours and began scurrying along toward the Buick, using parked cars as cover. He could hear the sound of running from the far sidewalk and from behind the trunk of the Buick, raised his head for a look, and the footfalls went silent. The muzzle flash illuminated the big man behind the gun, and a bullet cut a gash in the Buick's bumper. Another bullet went a little high, and the flash allowed Dorsey to confirm that it was Damjani. Dorsey took off in a low crouch and heard the ringing of the spent shell dancing along the cement. Jesus Christ, Dorsey thought, looking for a walkway between row houses and finding none. He has an automatic. Pray for a jam.

Avon Books are available at special quantity discounts for bulk purchases for sales promotions, premiums, fund raising or educational use. Special books, or book excerpts, can also be created to fit specific needs.

All rights reserved, which includes the right to reproduce this book or portions thereof in any form whatsoever except as provided by the U.S. Copyright Law. For information addresss Sanford J. Greenburger Associates, 55 Fifth Avenue, 15th Floor, New York, New York 10003.

This book is dedicated to Margaret Regina Hammill Lipinski of Pittsburgh, Greensburg, and points in between.

As he
expected, by the middle of the third page, the fingers of his right hand began to ache. The arthritis, a result of three greenstick fractures, was a variant that caused pain but only minor restriction of movement. Yeah, Dorsey thought as he worked at his fingers, shaking and loosening them, just enough restriction to reduce a classic hook-shot artist to a brawling rebounder.

Carroll Dorsey was pleased with what he had typed thus far; the final report, he felt, was going well. And why not? You're still describing the beginning of the case, he reminded himself, when things were going so nicely. Before the bottom fell out. Before you took the witness stand. “Should've known,” he said aloud. “Damned lawyer; they should've known. They took Stockman too lightly. Never take that son of a bitch light.”

From the far corner of the desktop, Dorsey took a can of beer in his right hand, holding it gently by the thumb and first finger, keeping the cold from the other aching knuckles. He leaned back in the swivel chair and turned toward a four-tiered bookshelf crammed with paperbacks and a small stereo tape player, from which the Basie band was now playing “Back to the Apple.” On the top shelf were three photos of the same tall, heavy-shouldered boy in three different basketball uniforms. The first two were black-and-white shots, one of the boy with a crew cut in
his Sacred Heart grade school uniform, the other of the boy with a bit more hair wearing a jersey with
CENTRAL CATHOLIC
printed across it. The third photo was a publicity glossy from Duquesne University.

“B. F.” Dorsey saluted the photos with his beer. “Before fractures.” He turned back to the Olivetti portable and drew himself to the desk.

Benito DeMarco was forty-seven years old, built like a brick shithouse, a pipe fitter, and a fraud. It had been over a year since his pickup had been struck from behind as he waited at a stop sign, and still, he claimed, the phantom pains rendered him totally disabled. The report's first three pages covered Dorsey's investigation. It documented the times and routes of DeMarco's numerous trips to hardware stores and building supply centers, Dorsey following close behind in a borrowed van. Attached to the report were copies of receipts Dorsey had obtained from sales clerks, proving that DeMarco had lines of credit and was buying supplies in contractor's quantities. Also accompanying the report was a tape shot from the van's rear window as DeMarco tore into a cement sidewalk with a pickax.

The good stuff, Dorsey thought, gazing at the typewriter keys, the stuff that speaks for itself. Now for the rest, which isn't such good stuff. Put it on paper and run. Just document your time for the bill.

Without further deliberation, he began a new paragraph, the pain in his fingers increasing, and documented that on October 26, 1984, he had appeared in the Court of Common Pleas of Allegheny County, at Pittsburgh, to provide expert testimony in the case of
DeMarco v. Fidelity Casualty
. After which his involvement in the case ended. And that, Dorsey reminded himself, coincided with the end of Fidelity Casualty's defense.

Dorsey sipped at his beer. Fidelity Casualty's attorney: so young, the product of a large law firm, so well dressed and groomed he seemed to Dorsey the result of reading
Esquire
too thoroughly. The guy was overconfident, figuring he had DeMarco's lawyer, Stockman, by the ass. As if
Jack “Personal Injury” Stockman ever stood still long enough to be taken hold of.

“You'll be a surprise witness,” the defense attorney had said at their first meeting. “I'mâthe law firm, I meanâwe're the ones who will hire you, not the insurance company. That way you're protected from discovery in pretrial, as part of attorney's privilege. You'll be called and sworn in, and we'll watch Stockman's face drop when you show the tape. Oh, Stockman will object when you're called, but he'll be overruled. And you'll put on your show. And we'll have kicked his ass.”

Dorsey rose from the swivel and crossed the office to seat himself on the edge of a black leather chaise beneath the two front windows. The office was the converted living room of Dorsey's row house; outside was working-class Wharton Street, the late-afternoon foot traffic increasing as the workday ended. Dorsey leaned his heavy frame toward the window, resting his elbows on the sill. For a few moments he watched a woodpecker, lost in the city, pecking away at a telephone pole it had mistaken for a tree. As he watched, Dorsey rehashed his day in court.

The jury box had been empty. It was the first thing Dorsey had noticed on entering the courtroom, and he immediately asked the defense attorney what had happened. “Funny thing,” the defense attorney said. “Soon as we got started, Stockman tells the judge his client wishes to waive his right to a jury trial. Wants to plead the whole thing before the judge.” When Dorsey went on to ask the defense attorney for his thoughts on the matter, he was told to take a seat and wait to be called.

The judge entered and took his seat at the bench and the young attorney stood, patting his hair into place at his temple and self-consciously flattening the lapels of his suit jacket. He announced, a bit too quickly, that he had a surprise witness, and Dorsey came to the witness stand. Stockman, seated at the plaintiff's table next to his client, remained silent.

Led by the defense attorney's questions, Dorsey recounted his surveillance of DeMarco's activities. The sales slips were entered into evidence and examined by the judge. At that point, the defense attorney asked Dorsey if he would bring in the videotape player and monitor being attended to by a sheriff's deputy in the corridor.

Stockman objected. Not vigorously, with none of the pseudo-outrage Dorsey had come to view as standard courtroom procedure; he merely announced his objection, but for a moment further he continued to scan a file folder that lay open on the plaintiff's table. Then Stockman, a man in his mid-fifties, tall and gray-haired, rose and walked halfway to the bench, assuming center stage. Once there, he informed the judge that pretrial discovery procedures had failed to disclose this investigation.

Nola by Carolyn Faulkner
A White Room by Stephanie Carroll
Misfits, Inc. by Holly Copella
The Planets by Sergio Chejfec
Emily Franklin - Principles Of Love 06 - Labor Of Love by Emily Franklin
The Holloways (Made for Love Book 3.5) by Martin, R.C.
A Governess for the faithless Duke (Regency Romance) (Regency Tales Book 3) by Regina Darcy
After the Dark by Max Allan Collins
An Immoral Code by Caro Fraser
Save for Shardae by Raelynn Blue
Our partner