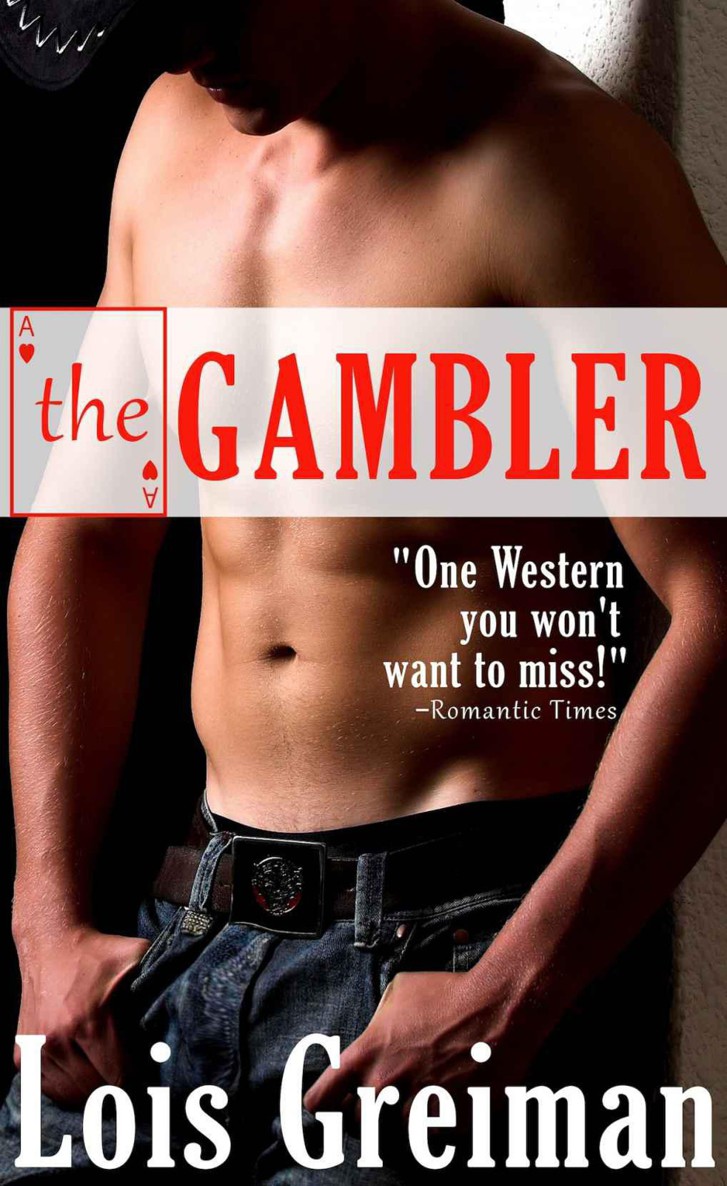 To Laurette Nelson, who believed in my talent long before I had any.

Thanks Mom—for all the times you rocked me to sleep with countless verses of
Stand Up Stand Up For Jesus
—for the frigid nights we linked arms and wandered out to the pastures in search of newborn calves—for the times you told me I was beautiful when I was not. Thanks, Mom, for encouraging me to be different. If I could do it all over and choose any mother in the world, I would choose you.

“Fast and fun with twists and turns that will keep you guessing. Enjoy the ride!”
Suzanne Enoch, USA Today bestselling author of Flirting with Danger

“Magical and sensual! A delicious love story from the gifted pen of Lois Greiman! Just the thing to keep you warm this winter! The Lady and the Knight is a delight! Lois Greiman is a charming storyteller!”
The Literary Times

“Excitement, colored with sensitivity and humor, makes this an unusual story that will have readers anxiously awaiting the next books in the series.”
Rendezvous

He had a pair of queens, but
she
had cleavage.

Not that Raven Scott had noticed.

"You ready to play, boy?" asked his opponent. Jude Fergusson was a wilted frame of a man, well past his prime, and impatient. Behind him, the woman called Charm leaned over his shoulder, deliberately exposing a good deal of smooth-skinned distraction.

She was, without a doubt, a rare beauty, but it had taken little time for Raven to realize she was not the woman for whom he searched. Not Eloise Medina's niece. And that was regrettable, for she could have made the journey to St. Louis enjoyable indeed. But luck was a fickle lady. One could not expect to have both an exquisite traveling companion
and
a fortune at journey's end. Thus, Raven would restrain himself from the luxury of greed—and take the fortune.

"Then you've never heard of a Chantilly Grady?" he inquired now. It was basically the same question he'd asked twice before. He only mixed the words a bit. In his line of work it paid to be thorough. And in any case, he wanted to delay the game. He wanted to build up the old man's edginess and give himself an opportunity to glance now and then at the bounty Charm so generously displayed above her bodice.

"I told you I ain't never heard of no Chantilly," said Jude, making no attempt at civility. "Now, you playin' or throwin' in yer cards?"

A less experienced gambler might easily be distracted by the girl's presence, thereby causing him to do something foolish, Raven knew. But he was not such a man.

"You ready to play, boy?" Jude repeated, his voice cracking.

All right. So he was a
little
distracted. Lowering his gaze to his cards, Raven checked his composure, making certain he offered his opponent no clue to his thoughts. But no, years of gambling assured a bland countenance. Despite Clancy's irritating and sundry shortcomings, his former partner had taught Raven that much. Damn his hide.

"How many cards?" Without looking, Raven knew Jude's right hand shook slightly as he held the deck, a tremor discernible only to the sharpest eye. A tremor that might be subdued completely if old Burle Dorsey, the inn's proprietor, would bring the man a drink. But Burle was kept busy with other patrons, so exposing Jude's debility to Raven's predatory gaze.

Pity might be appropriate here, but pity was not one of Raven Scott's weaknesses. Cleavage, on the other hand...

"How many?" Jude's tone was even harsher now, which meant he held a decent hand and was becoming impatient to win, an idea supported by the fact that he had taken only two fresh cards.

As for himself, Raven was bored with the game. He'd won enough to call it a profitable night. In fact, he'd won enough to have mercy on his rival, for if Raven had made the attempt, he could have imagined himself in the other's chair in thirty or forty years. Yet mercy was as useless as pity to a gambler's way of thinking.

Although Raven didn't actually consider himself to be a professional cardplayer. No. He played for reasons other than money, which made him what? A detective with a weakness for sport? No, gambling was not a weakness for him, either. It was merely a means to obtain an end, as was everything in his life. He'd learned, if nothing else, to be pragmatic, even if it galled him, or perhaps more specifically,
especially
if it galled him.

"You keepin' them cards?"

Raven raised his gaze slowly, knowing nothing but boredom would show in his eyes. It seemed his intentional delay had disconcerted the old man and caused the woman's brow to wrinkle somewhat, as if she, too, were displeased, but too careful to show it more clearly. Who was she? That was the question that had first prompted Raven to enter this game. Even now curiosity held his interest.

Was she Jude's wife? It was possible. Maybe the old gambler wasn't as elderly as he appeared. Though he was dissipated and worn, he was certainly not past the age of needing a woman, if such an age ever came.

Still, the thought of the old piker bedding the charming Charm made Raven's gut clench. Which meant, perhaps, that he wasn't as jaded as he had thought.

What a disconcerting idea!

"Damn it, boy!" growled Jude, rising jerkily to his feet. But already Charm's hand was on his shoulder and her whisper in his ear.

The ruddy color of the old man's face lightened somewhat, and as Jude's attention was diverted by the girl's words, Raven allowed his gaze to settle, just for a moment, on the high, softly mounded tops of her breasts.

It was a mistake, for despite Raven's pride in his single-mindedness, clearheaded thought and womanly charms did poor bedfellows make. Raven mentally grinned, almost allowing the humor to touch his lips as testimony to his clever wit. Or was it for the girl's magnificent bosom, so perfectly displayed above the bright tangerine hue of her gown?

Charm's attention lifted in unison with his eyes, and for just an instant their gazes met. From across the table, Raven could hear her faint intake of breath, as if she were shocked by the boldness of his stare. But she didn't straighten immediately, he noticed, and now Raven allowed a brief escape of his well-confined smile.

"I'll take two," he said, his gaze still locked on her face. Her cleavage wasn't her only spectacular feature, it seemed, for her eyes, too, were riveting. Dark, heavily lashed, and decidedly sultry.

"Did I say two?" Raven shifted his gaze smoothly back to the girl's bosom before lifting it to his opponent's reddened face. "I meant three."

The trio of cards was rapidly, if grumpily, delivered. They fit neatly into Raven's hand. Better than neatly, but he kept his gaze casual as he perused the queens.

"I bet fifty." Again the old man's tone was taut.

"And I'll..." Raven let his concentration stray to the game. He was lucky in cards. Lucky and adept. Always had been. Maybe it was hereditary. Maybe not. He paused in his betting, his voice dwindling, as if uncertainty had finally set in. "I'll see your fifty and... raise you."

It was no surprise that Jude raised, nor that he raised again after that, but Raven doubted his ability to do so a third time, for already he had lost a good deal of money. Though he was a fair gambler, he didn't appear to be exceptionally flush. Raven prided himself on being a first-rate judge of people. A mercenary bastard himself, but a damn fine judge of others.

"Is Charm your real name?" he asked now, knowing he was not above taking whatever the girl was willing to offer him. And according to her eyes and languid movements, that was a fair amount.

Old man Fergusson turned his head to the right, as if not trusting his hearing to his opposite ear. "What's that?"

Raven tightened his grip on his cards, knowing his rivals would notice and think him nervous. "I asked if Charm was her real name."

"What the hell's that got to do with poker?"

It was surprising, even to Raven, how quickly the man became angry, but again the girl's hand appeared on Jude's shoulder, soothing.

"Yes," she said, looking no less stunning when she straightened to gaze down at him from her full height. "My name's Charm."

“The name suits you." He allowed himself one more glance into her eyes, wondering if he'd been wrong about their color. Perhaps he'd been hasty in assuming they were brown. But her hair was as dark as the hide of a blood bay mare, and just as shiny in the wavering light cast by the oil lamps. Her skin was the creamy hue of winter goldenrod and looked flawless. But the fact that he thought so could probably be attributed to his own deprivation of female companionship. Deadwood Gulch was notably short of women. Although it hosted a sort of second-rate gold rush, the gentler sex was mostly absent, including one Chantilly Grady.

Tomorrow Raven would search again for the girl. But tonight he would gamble on games of chance and love, or as close to love as he was willing to let himself get.

"I'll raise you fifty," Raven said distractedly, then waited for the agitated sounds of Jude's agony.

They came just as suspected, beginning with a scratchy clearing of the old man's throat. "I ain't got that much left," he admitted finally.

Raven delayed only a moment before making his offer. "Then I'll accept a night with the girl."

For an aging man with a drinking problem, it was amazing how fast Jude could reach across the table. But Raven was younger and faster. He tilted his chair out of reach, watching the old man's face contort with rage.

"I killed better men than you for my daughter!" he choked.

His
daughter
! Now there was an interesting twist. Who would have thought the old man could have sired a beauty like her? And what kind of father would allow his own child, well grown and proportioned though she was, to participate in the deprecated practice of gambling? Especially with that scandalous tangerine gown exposing her tantalizing... eyes!

"My apologies," Raven said, realizing Jude was
just
such a man. Not bothering to rise to his feet or change his expression, Raven kept himself casually out of the other's grip as the girl called Charm attempted to reel her father back. "I misspoke, of course," he said, using that irritatingly gallant tone he had learned from the other boys at school. "I meant to say I would appreciate her company this evening. For
dinner.
Nothing more."

The older man straightened, his face brick red. "You can go to hell!"

"A distinct possibility," Raven said flatly. "But you've bet your last dollar, or nearly so."

Jude's hand curled to a fist on the table's rough-grained surface, but he didn't lunge again, seeming immobilized by rage.

Charm straightened. Her eyes were slightly narrowed now and her fine body very still as she watched him. Raven returned her gaze. Despite it all, his muscles tightened with anticipation when he allowed himself to look directly at her. She, on the other hand, seemed perfectly focused on whatever it was she wished to determine with her point-blank stare.

Carnal Acts by Sam Alexander
Her Secrets by Wilde, Breena, 12 NAs of Christmas
Extreme Close-Up (Perspectives Book 1) by Julie Jaret
Midsummer at Eyre Hall: Book Three Eyre Hall Trilogy by Luccia Gray
Rough Justice by Stephen Leather
Lassiter 01 - To Speak for the Dead by Levine, Paul
Inked Ever After by Elle Aycart
Dragon Ultimate by Christopher Rowley
Murder Under the Palms by Stefanie Matteson
Edge of Honor by Richard Herman
Our partner