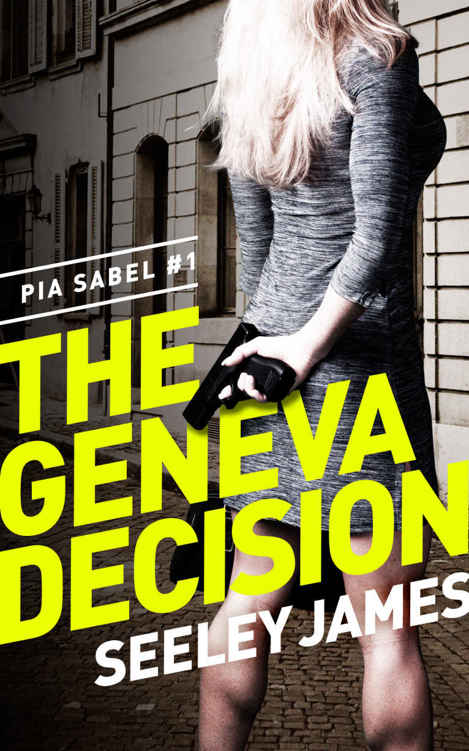 Visit my website to find other Sabel Security books including
Bring It
(2014),
Element 42
(2015),
Death and Dark Money
(late 2015), and future releases. Join my newsletter for updates about works in progress and the occasional trivia game for prizes and freebies:
SeeleyJames.com

Praise for Seeley James and the Sabel Security Thrillers:

“This book really got into its stride and kept going strong. I loved the character of Pia Sabel—there’s a girl Charlie Fox would team up with any day!”

“Seeley James has created a protagonist that is strong and yet conflicted. This compelling heroine presents a multi-faceted character that readers will enjoy getting to know in this first project and probably for many more to come.”

“If you're an adrenalin junkie who enjoys breakneck pacing and action on every page, then
The Geneva Decision
is the book for you… A great debut for a new series.”

“I always hear people say ‘gripping story,’ but in this case it fits. If you like women in lead roles, this is a great book.”

“I picked up
The Geneva Decision
based on a recommendation and I’m glad I did. Seeley James does a good job of… taking the reader to new places… James is a writer to keep your eye on, and I’m looking forward to the next Pia Sabel book.”

Giacomo Giammatteo, author of
Murder Takes Time
and
A Bullet for Carlos

S
he thought the man was an assassin the instant she saw him. Then he walked out of the shadows. Definitely. All the visual signs for an assassin were there: sweat on his brow, bulging eyes, pulsing neck veins, purposeful stride. She knew the signs inside and out. When she was ten, off-duty Secret Service agents had permanently etched them in her mind. He weaved through the forest of tuxedos and ball gowns in the small park, just a silhouette in the last rays of sunlight shimmering off Lake Léman. Then he disappeared behind groups of partiers.

She searched for him. Nothing.

Maybe she imagined him because her father had forced her to change careers. Which forced her to attend the party. Which forced her to meet Clément Marot at the Banque Marot reception. Or whatever the French invitation called it. They’d roped off the whole park for cocktails before the formal dinner. Exclusive as it was, she would never feel comfortable around the idle rich. She preferred the company of people who had accomplished things on their own. Still, she had agreed to take the job so she should give it her best effort.

Pia Sabel sighed and scanned the crowd, this time looking for Marot. Any man there could be the banker. It was Geneva after all. She pulled out her phone and took another glance at Marot’s picture.

When she looked up, she saw the assassin again.

He was crossing the park at some distance. His stride was picking up pace as if he were nearing his target. Then he disappeared behind waiters bearing silver trays of champagne flutes. She looked around at the reception guests who politely laughed at each other’s cocktail wit. An alarm went off in her head.

She reached into her purse and clicked her panic button. Agent Marty waited on the far side of the boulevard, Quai du Mont Blanc. Could he reach her in time to help? She looked around for security people then remembered there were none. The safest city in Europe had few of them. The very reason Marot wanted to hire Sabel Security.

Shouldering her way between guests, she put herself on an intercept path. With a little luck, she could cut him off and maybe delay him until help arrived. But she reached the balustrade and a magnificent view of Jet d’Eau, Geneva’s famous fountain, with no sign of the assassin. She stepped onto a park bench and searched again. His predatory pace would make him easy to find.

Instead, she found Clément Marot chatting with people in the far corner. The assassin stepped out from between two guests on Marot’s left, pulled his hand out of his pocket, and pointed something at Marot’s temple.

The bang echoed off the hotel façade and across the water.

Marot collapsed on the ground like a dropped cloth. Sharp shouts and cries erupted as a small crowd moved around the victim. Some tried to move back, others to move in, but they cancelled each other out.

Pia Sabel watched the assassin. He held a gun in his hand and aimed at bystanders’ faces. Everyone in his path stepped back a good ten yards, crushing together until there was little room to move. Once they moved, the gunman strode toward the street. After five paces, some men swirled in behind him. He turned around and threatened them with the gun, then resumed his march.

Pia slid her hand around the Glock in her purse’s hidden holster but left it there. Too provocative. Too many innocent bystanders.

She sized him up. Average height for a European, he was an inch shorter than Pia. She’d sparred with enough men at the gym to know a fight with him could go badly. Very badly. But there was another move that might work. Dangerous, but someone had to do something.

Threading her way between guests, Pia took up a position in the killer’s path. Standing on tiptoe to see over a tall man’s shoulder, she watched him. His wary eyes scanned the crowd, daring anyone to stop him. His cold gaze locked with hers for a second before moving on. Then he hesitated, something had caught his eye. He looked in her direction again.

To keep the element of surprise, she turned her back, bent her knees, and lowered herself below the shoulder in front of her. She tried to use all her senses. She watched people’s eyes to track his movement. She tried to feel the static charge in the air through her skin. She listened for his footsteps.

Her human shield stepped back, clearing the killer’s path.

She coiled the powerful springs in her legs and listened to the killer’s footsteps approaching.

Pia exploded into his path, pivoting on her right foot and hooking her left ankle around his. Momentum carried his bodyweight forward, but before he could recover, her left forearm slammed hard into his shoulder blade. The assassin crashed face first onto the concrete pathway. She jumped into the air above him, her gown billowing around her like an unfurling parachute and came down hard. Her knees drove into his back on either side of his spine, halfway between the ribs and the hipbone. The impact forced the air from his lungs and pounded his kidneys.

Emboldened by her initiative, a heavy man stomped on the killer’s wrist until the gun fell free. Another man picked it up. Someone hurled epithets in French while other voices called for police and doctors.

Multiple vehicles converged on the scene, their sirens shrieking. Their blue and white lights splashed off nearby windows before spilling into the park. Pia, panting from the adrenaline rush, patted down the killer. In one pocket, a book of matches with a handwritten phone number and a bus ticket from Douala, Cameroon. In another pocket, a wad of cash comprised of several euros and other bills that read
Banque des États l’Afrique Centrale
. Nothing else—no other weapons, no ID, no wallet, no phone. He writhed and struggled against the men holding him.

Agent Marty pushed through the crowd, looked at Pia and the man under her knees. He said, “Hey boss, you OK?”

“Killed Marot. He was heading to the street, probably had an accomplice. Cuffs?”

Marty whipped out the plasticuffs and took over.

Grabbing a fistful of her gown, Pia kicked off her heels and pushed through the astonished crowd. She ran toward the quai fifty yards away, jumped the velvet rope, and surveyed the broad sidewalk. Thirty meters to her right, a lone gray Peugeot idled at the curb in the no-parking zone. It was empty, the driver’s door open, no license plate. A tall man, pale with blond spiky hair and a thin goatee, stood not far from the car, just outside the rope. He strained on his toes to peer into the crowd.

His face snapped her way. Their eyes locked.

He turned to run. Should she pull her gun or try to tackle him? She was not a confident marksman on the range but was a world-class sprinter. She gave chase.

In a last ditch effort, she threw herself into a slide tackle. Her feet nearly clipped his ankles but caught only a bit of his heel. He stumbled and jumped into the car. By the time she grabbed her Glock, he had the door closed and in half a second was tearing away.

Her darts would never penetrate the car’s sheet metal.

Should have brought bullets.

She clutched her gown
at the shredded hip and limped back toward Agent Marty. As police cars and emergency vehicles swarmed the street, officers and emergency responders pushed through the crowd. Pia followed in their wake.

Agent Jonelle, hair slicked into a tight bun at the nape of her neck, came alongside Pia.

Pia glanced over. “Thought I gave you the night off.”

“Awfully kind of you, Ms. Sabel. But you know I don’t work for you, right?”

“Mr. Sabel told me to keep your past in the past and unplug any pranks you might think funny.” She paused as they walked. “And I’m here to help you run Sabel Security before you run it into the ground.”

Without breaking stride Pia turned to stare at the woman. She turned forward again, looking ahead twenty yards. Several police officers had arrived and formed a circle to the right of Marty and the killer. Two, a man and a woman, wore blue windbreakers with POLICE CANTONALE stenciled in white from shoulder to shoulder. The rest were uniformed officers.

“Those were Dad’s words?” she asked.

“Pretty much—but cleaned up some.”

The woman in the blue windbreaker stepped forward to meet them. She carried a purse slung over her shoulder bandolier-style, the way Pia liked to carry hers. She extended a hand, smiled, and gushed something in rapid-fire French. The only words Pia understood were the two that matched the woman’s nameplate,
Capitaine Villeneuve
. Villeneuve didn’t wait for a response but hurried on toward three uniformed officers, shouting orders as she went.

Must have been her official thank you.

Pia approached a pudgy officer next to Marty. His name badge read
Duchamps
.

“His accomplice is getting away in a small gray Peugeot, no plates,” she said. “You can catch him if you hurry.”

Duchamps stared at her, then turned to Marty. Marty translated and Duchamps stared some more. After an awkward second, he pulled a handheld radio out and repeated the description.

Jonelle tapped her shoulder. “What makes you think they’re working together?”

“They were both soldiers.”

Marty extended his free hand, holding her Vivier heels. She smiled thank you.

Pia examined her captive while Jonelle waited for an explanation. Since he wasn’t facedown with her knees in his kidneys, she could get a look at him. He had a swarthy complexion, black beard, dark eyes, and a high and tight haircut. A broken nose and bloody shirt. No longer struggling, he seemed oddly calm. Not subdued. Not worried.

“This guy was aiming at people’s heads,” Pia said. “Marty told me that’s how soldiers aim in case the enemy is wearing body armor. And the other guy wore Army boots.”

The Chaplain’s Legacy by Brad Torgersen
Deadly Catch by Helms, E. Michael
Resuscitation by D. M. Annechino
Puck Buddies by Tara Brown
Swimming Across the Hudson by Joshua Henkin
The One Real Thing (Hart's Boardwalk) by Samantha Young
The Other Side of Paradise: A Memoir by Chin, Staceyann
Killing Monica by Candace Bushnell
HIDDEN SECRETS by Catherine Lambert
Dear Lover by David Deida
Our partner