Read The Girl Who Dreamt of Dolphins Online

The Girl Who Dreamt of Dolphins 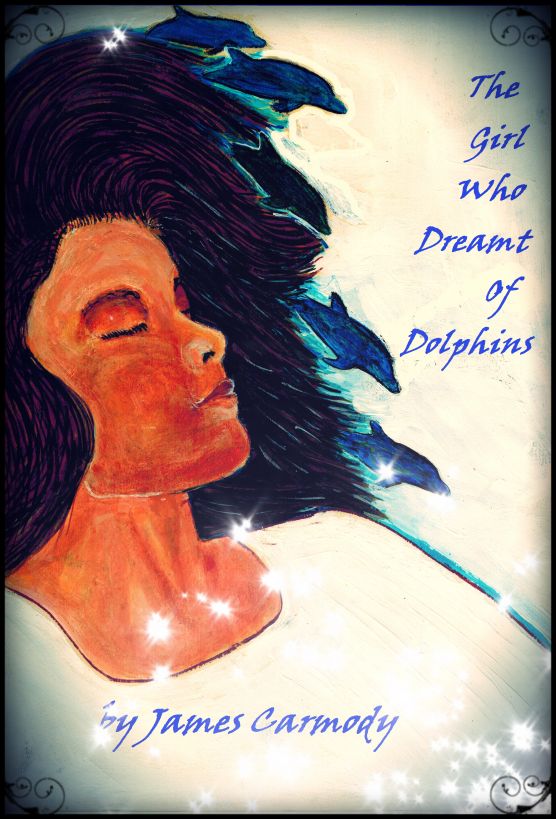 The Girl Who Dreamt Of Dolphins

This ebook is licensed for your personal enjoyment only. This
ebook may not be re-sold or given away to other people. If you
would like to share this book with another person, please purchase
an additional copy for each recipient. If you’re reading this book
and did not purchase it, or it was not purchased for your use only,
then please purchase your own copy. Thank you for respecting the
hard work of this author.

Lucy woke up and stretched, lying sprawled across her bed. Her
duvet had half slipped off and she shivered in her pyjamas. Her
mind though was still full of dreams of dolphins in the deep,
emerald-blue water, swimming all around her. It was the same dream
that she had so often before. In her dream she always stretched out
her arm towards the dolphins, but never could quite touch them.
Then one dolphin, smaller than the rest but with sparkling eyes and
a look in its eyes that made her heart feel warm would turn briefly
towards her clicking encouragement, almost as if to say ‘follow me’
before swimming off into the deep blue void.

Lucy stretched again. It was a beautiful dream and so vivid,
she felt as though she was almost there. Some dreams you just don’t
want to wake up from, they’re so nice.

‘
Lucy’ called Dad from downstairs, ‘It’s time to get
up.’

‘
Coming’ replied Lucy sleepily, as she crawled out of bed,
knocking a teddy or two to the floor as she did so. She yawned
before pulling on her school clothes and stumbling downstairs to
breakfast.

Dad was busy, rushing around, dressed in his suit, keen to get
Lucy out of the house before heading off to work. He looked
stressed and preoccupied.

‘
Breakfast is on the table Lucy’ he said. ‘Eat up. You know we
don’t have all day.’

‘
Yeah yeah’, she mumbled through a mouthful of cornflakes,
still half asleep.

‘
And remember’ he continued, ‘its homework club again today, so
I won’t be picking you up from there until five thirty.’

‘
Great!’ she thought with a grimace. Packed off to the
after-school club again. It was just not the same since
Mum….

Dad crammed toast into his mouth with a spray of crumbs as he
raced around the house in his rush to get out.

‘
And another thing’ he added, ‘I’ve got a work-do again this
evening, so I’m leaving the house again at six thirty and Maureen’s
coming over at six to baby sit. You’re okay with that aren’t you
Luce?’ he continued. ‘And I don’t want to hear Maureen complaining
about you again like she did last time.’

‘
You know I’m not a baby any more don’t you’ replied Lucy. I
don’t need a baby sitter.’

‘
Well you’re only just twelve years old and not quite grown up
yet young lady’ he replied. ‘I can’t just very well leave you alone
all evening can I?’

‘
I could sleep over at Amy’s house like I did before’ Lucy
replied.

‘
I’m sorry Lucy, I just can’t keeping asking Amy’s Mum for
favours like that all the time, it’s just not fair on
her.’

‘
She doesn’t mind’ complained Lucy, frowning into her
cornflakes.

‘
Look’ I’ve arranged for Maureen to baby sit and that’s the end
of it’ he said definitively.

Dad was always like this, rushed, preoccupied, or just not
there. It wasn’t fair. He hadn’t always been like this. They used
to have a great time together. Now it just seemed so much duty and
drudgery. Lucy sighed to herself as she finished her
cereals.

Dad looked at his watch. ‘Better get going Luce’ he said ‘You
don’t want to be late again.’ Lucy gave him a thin
smile.

Lucy slipped on her shoes, grabbed her satchel and snatched
one last gulp of her juice as Dad chivvied her out of the
house.

‘
You want a lift or are you good to walk?’ he asked as he
played with his car keys.

‘
It’s okay Dad, I’ll walk’ said Lucy. She knew he didn’t want
to get delayed in the school traffic. He gave her a peck on the
cheek.

‘
See you this evening then’ he said.

Lucy was the kind of girl who never really stood out in the
class photo. She was middling height and generally got stuck
standing in the third row. Her Dad always said she was skinny and
her Gran always told her she looked lovely, though Lucy thought
that Gran was just saying that to be nice. She had a freshly
scrubbed complexion and kept her shoulder length hair in a tidy
pony tail when she was at school. Pretty much all her class-mates
seemed to get on with her though she was never the class favourite
and in her school reports her teachers always commented on how nice
she was to have in class. Everyone had been very kind to her this
last year. Lucy had fine features and a slightly olive complexion,
which meant that she tanned easily. She got that from Mum. She
dressed tidily and was generally well turned-out for school. She
hated to be the centre of attention because it made her feel
self-conscious. She could stand up for herself against bullies in
the playground if she had to, but fortunately it hadn’t been
necessary for quite a while.

School wasn’t so bad, though she didn’t relish the prospect of
another day of study this chilly Monday morning and wished it was
already half term. As she trudged determinedly to school, her best
friend Amy popped her head out of her bedroom window as Lucy passed
her house and then quickly ran out of her door, with a noisy ‘Bye
Mum’, slamming the door behind her before racing to catch up with
Lucy. Amy was the same height as Lucy, but with jet-black hair and
Lucy always thought her the prettier one, though Amy wouldn’t
agree.

‘
Hi Luce’ said Amy, just a little out of breath, ‘done your
homework?’

‘
Just about’ grinned Lucy. ‘You know me, I do it, but only at
the last minute.’

‘
Well it doesn’t seem to harm your marks anyway’ said Amy
ruefully, ‘So, what did you do this weekend?’

‘
Oh you know, the usual’ said Lucy with an expression that said
‘don’t get too excited now.’ ‘Dad was pretty much working from home
all weekend’ she continued. ‘All he does is work, either that or do
the shopping and then we just watch TV in the evening. He never
does fun stuff anymore. I asked him if he wanted to kick the ball
about a bit in the garden, but he just said he was too
busy.’

‘
That’s no good’ said Amy. ‘We had Gran and Grandad around for
lunch on Sunday and Gran fell asleep on the sofa and snored.’ Lucy
snorted a laugh as they crossed the road and joined the other
children streaming towards school.

‘
So are you doing swimming practice this lunchtime, or do you
want to hang out with me?’ Lucy’s school was right next door to the
local swimming pool and, though the paint was peeling round the
windows and an ant’s nest seemed to have taken up residence in the
changing rooms, it was Lucy’s favourite place to be.

‘
I’m in the pool of course’ smiled Lucy. She just loved
swimming and her classmates called her ‘the fish.’ Lucy was a
natural in the swimming pool and could stay under water longer than
anyone else in the school. Miss Baldwin, their sports teacher, said
that Lucy should train seriously and that she could go far. But Dad
was dead-set against it and said he wouldn’t support all that time
training out of hours when she should be doing her homework. Lucy
was trying to think of a way to talk Dad round to it, but hadn’t
done anything about it yet. Ms Baldwin said she would talk to him,
but Lucy was worried it would have the opposite effect. She just
had to content herself with time swims twice a week during the
lunch break. It was only for twenty five minutes or so, but it was
better than nothing and what Dad didn’t know he couldn’t complain
about.

‘
I figured you wouldn’t want to hang around with the cool crowd
like me’ joked Amy.

‘
Like you?’ exclaimed Lucy, giving her a playful nudge in the
ribs. They walked in through the school entrance.

That lunchtime, Lucy stood poised on the side of the pool and
then dived gracefully and easily into the water. She sliced into it
like a knife, leaving barely a ripple. She surfaced again almost
half way across the length and before finishing it with the
front-crawl. She did three more lengths the same way before pausing
a moment at the edge. She took a deep breath, then plunged
underwater and swum the next length without breaking the surface
for air.

Unluckily for Lucy, she wasn’t the only girl in the pool and
she often felt that the other children just got in the way. It
looked like Miss Baldwin agreed, as she told Todd Simmons to get
into the next lane and let her through. Lucy did the butterfly for
the next half a length, powering herself through the water with
power and style. It was very tiring though and Lucy only did a
short distance before turning over and floating for a few moments
on her back, staring up at the ceiling. Miss Baldwin loomed into
view.

‘
So have you talked to your Dad yet about getting serious with
your training schedule?’ she quizzed her.

‘
No, not yet’ admitted Lucy reluctantly. ‘It’s
complicated.’

‘
So you keep telling me Lucy’ said Miss Baldwin, ‘but you don’t
know until you try.’

‘
I’m working on it’ bluffed Lucy, before plunging under the
water again. Ms Baldwin sighed and then looked at her watch. She
blew the whistle.

‘
Everyone out!’ she called. ‘Break ends in ten minutes. You’d
better get showered and changed ASAP.’

Lucy changed quickly, rubbing her hair briskly before pulling
on her clothes onto her still-damp body. She had to sprint back to
class and got there only just in time.

At the end of the last lesson, Lucy remembered what Dad had
said about being in the after-school club. It wasn’t so bad there,
but it’d be nicer just to walk home with Amy, Anya and her other
friends. Instead, in the after-school club the boys just tore
around all the time making noise, throwing balls around and
generally getting in the way. Lucy needed a chance to unwind at the
end of a long day.

Mr Baines told the class to pack away their things and opened
the door to the playground, out to where a few parents were
congregating at the school gates ready to take their children home.
Lucy glanced up and then uttered a small gasp of
surprise.

‘
Bethany!’ she exclaimed. Her aunt had appeared at the door.
She rushed to get her things together.

‘
Hey Kiddo’ Bethany said with a smile. ‘I thought I’d just drop
by and pick you up from school today.’

‘
Sounds good to me’ said Lucy eagerly, ‘Dad didn’t tell me you
were coming.’