I suppose it’s a good sign that his “bodyguard”
hasn’t returned. Or maybe she just has no reason to, nothing else
to tie her here if Michael is…

We’ve done the cleanup: buried the dead, patched the
injured, fixed the base as best we could. The Knights and the
Nomads came in force to help, even after all they’d sacrificed
themselves. And the ETE, of course. Even Hatsumi Sakura called to
pay her respects, to officially grieve a fallen warrior.

And I suppose that’s Michael’s best legacy: We have
friends here, friends willing to shed blood for us (and not just
because we can give them food and supplies).

But Chang is still out there. We hurt his ship, broke
his big gun (though the one shot he got off hurt us bad). Sent him
limping away when we pulled most of his teeth—I guess he wasn’t
willing to waste everything he’d put into building it. He fought
off our boarders, turned and headed back into Coprates while a
second wave of drones kept the ETE too busy to pursue him. Then he
blew up a storm to cover him, hacked into the ETE atmosphere net
and upped the output to mask his EMR signature until he could hide
himself somewhere. But he lost a lot of people, assuming that means
anything to him. We collected another hundred and fifteen
bodies—from the downed airships and the fight on the big thing’s
deck—and nineteen wounded left behind.

Earthside is calling it a “stunning victory,” “a
testament to the human spirit” and a lot of other things people who
weren’t here might call a fucking slaughter. All we bought
ourselves, and way too expensively, was another reprieve. Chang
will fix his flying fortress and his base-killing gun and come
back, probably harder.

The one possible consolation: when Chang abandoned
Zodanga, he lost his hidden aircraft factory, apparently putting
everything he had into the one big ship, and that may be all he has
left now. Unless he has another factory somewhere in Coprates. Or
his ship
is
a factory—Zodanga was stripped of whatever
manufacturing gear they had.

At the very least, he can probably make more Discs.
And repair his rail gun. Hopefully he won’t be able to get it back
online until we can get a better defense in place, or at least be
able to take this fight to him. But we won’t have assets to go
after the bastard until at least June. That means the ETE are our
best hope, something Earthside is still loathe to admit.

What I do have is a new set of satellites overhead to
keep looking for him, and to get us some of the recon we don’t have
means to do, maybe find other survivors (preferably before Chang
does). And a clear uplink that doesn’t rely on our Candor relay,
letting us pull those assets back home.

And Colonel Markus Burns, calling himself Acting
Planetary Commander even though he hasn’t set foot on planet, won’t
even be in orbit for another two months. But he’s The Appointed
Voice of UNMAC, at least until General Richards gets here in June.
(Neither one of them sound particularly broken up by Colonel Ram’s
assumed fate, despite all the official condolences.)

For now, all I can do is watch the screens. Keep
everyone fed. Maintain the goodwill (especially with Earth getting
closer to re-establishing a working presence here).

And hope Michael’s just going to show up, limp out of
the desert (or get found by an ETE Guardian patrol), apologize like
an idiot for getting dragged away from the fight, then resume
pissing off his so-called superiors while he makes friends out of
enemies.

Map of Melas and Western Coprates 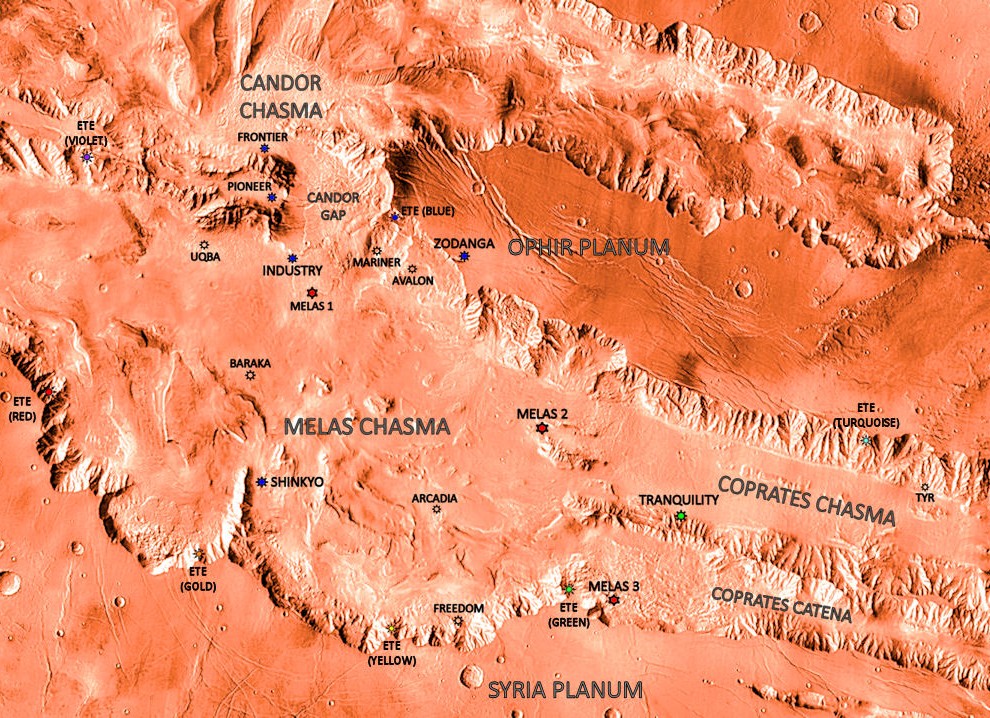 The God Mars continues in
Book Three: The Devil
You Are

Michael Rizzo is an artist, martial artist, collector
(and frequent user) of fine weaponry, and has had a long, varied
and brutal career in the mental health and social services
battlefield. (He is locally regarded as the Darth Vader of social
work.)

His fiction series include
Grayman
and
The
God Mars
.

He causes trouble in person mostly in the Pacific
Northwest.

For updates and original art, visit Michael on
Facebook.com
,
and see the Facebook page for “The God Mars Series”.

Discover other books by Michael Rizzo at
smashwords.com