Data whispered, “Geez, if
he
didn't make it out—and he was supposed to be an expert—what about us?” Then he had another thought, so he reached into his
pack and pulled out a couple dozen small red thingies made of caps, and set a couple down on the floor.

That's when I noticed the medallion hanging around the skeleton's neck. I grabbed it and studied it close. It was copper,
and it was shaped like a key with a skull at one end, with three irregular holes cut into it for the eyes and nose.

For some reason I wondered if it fit onto the map somehow, so I took out the old parchment and tried comparing points.

This last item was the last straw for Andy. She flipped out and started runnin' down the tunnel, yelling, “Let's get out of
here! Come on! We've got to keep moving!”

She was running right for a tree branch lying on the floor against the wall, and then I noticed there were branches just like
it, spaced regularly along the floor, stuck into the wall, right at places near where the boulders were hanging.

But it was too late. Her foot snapped the first branch.

I heard this humongous creaking sound, and the first boulder began to waver. And suddenly, without thinking, all the kids
ran after her. Now, I wasn't very strong, but I was pretty fast—faster than old Chester, anyway—so I raced along with everyone
else. Playing Beat the Boulder.

And did they fall! Just missed me twice, once so close that the wind of the fall knocked me over. But the noise alone was
enough to kill anyone with half a brain. Fortunately we'd parked our brains elsewhere temporarily.

Anyway, we all made it somehow, finally, to the far wall, as the last boulder crashed behind us by a hair, shattering into
rubble. We huddled there a minute, shaking and holding our ears, scared and buzzed, and only slowly realized we were at a
dead end.

It was a big stone wall with a small circular boulder stuck into it at the bottom. And gradually, as our ears stopped ringing,
we were aware of another sound—behind the wall.

Brand took it as his big chance to be Macho Rescue-Man. He gave Andy a wink, yanked off his shirt, and flexed. Andy blushed,
Mouth
woo-wooed
, I tried to make a muscle, Data rolled his eyes, and Brand put his shoulder to the boulder.

Nothing happened at first, but then, after a lot of grunting and sweating and isometrics by Brand, the thing began to give.

Brand was a lot of kinds of jerks sometimes, but he was strong, I'll give him that.

Slowly the rock moved more and more, with a sound of
crunching stone. And suddenly it just rolled away down the slope of the floor, leaving a hole in the wall.

Everyone applauded, and Brand did his typical fake-modesty trip. I poked my head into the opening. Total blackness. But there
was still that sound, only much louder now. Sort of a squeaking, rubbing, whupping.

“Hey, Data, bring the light,” I said. It wasn't the kind of sound I wanted to walk into blind.

Brand stuck his head in. “Hello! Hello! Anybody here?”

And the next thing I knew, there was a screech and a flapping, and about a thousand bats came flying out of the hole.

They were in our hair, in our clothes, big black wings and sharp pointy teeth and red eyes and evil garbles. We knocked at
them, we tried to hide behind the big rocks, we yelled—I think it was the most disgusting thing that ever happened to me in
my life.

Luckily they didn't stay long, or we might have died of being grossed out. They flew in a swarm down the tunnel, back in the
direction we'd just come from, like a loud cloud. It took maybe five minutes for all of 'em to pass.

So then we moved on.

We had to muck through about a foot of bat guano on the way to the exit tunnel, which was no treat, but then we were across
and into the next passage.

Brand was leading the way, holding the lantern, but the passageway was gradually getting narrower and heading
lower again, sometimes so steep that we had to sort of slide down—and I could see Brand was getting nervous.

After a while the tunnel got so tight, we had to start crawling. That's when the flashlight began to flicker and die. Brand
began to panic.

“Hey, what's goin' on? This thing's losin' juice! What're we gonna do about light?”

Data reached into his backpack and pulled out one of the flares he'd lifted from Chester Copperpot. He struck it, and it burst
into that special cool red flame they make, so bright you can hardly stand to look at it, and he passed it to Brand.

Brand took it, but he kept griping. “All we keep doin' is goin' lower! Where we goin'? Where's this leadin'? All I know is,
this place is gettin' too damn small.…”

I was near the rear with Andy. “Uh-oh,” I whispered, “he's gettin' that elevator look in his eyes.”

I moved up close to her. Even after all this she smelled awful good. Some kind of perfume none of the other girls wore. Made
me wanna talk softer than usual.

“Me and Brand got stuck in this elevator once,” I explained. “For five hours. It was okay at first, but then he started gettin'
closet… trophy… photo…”

“Claustrophobia,” she said. She was even smarter than Brand.

“Yeah. And he freaked out. Lost total control. Started spinnin' in circles, his arms whippin' around. Like a break dancer
on fast forward. I had to climb on the elevator roof so I wouldn't get hurt.…”

The tunnel started widening again a little, so we were able to stand up mostly now, but even so, Brand suddenly began shouting,
“I can't breathe! I'm chokin'! Mikey, gimme your mist inhaler! C'mon, man! Now!” 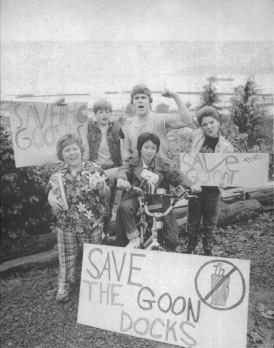 The Goonies fight to save their homes on the Goon Docks in the Warner Bros. movie, THE GOONIES. 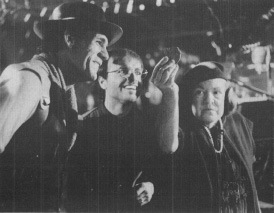 Mama Fratelli and her boys, who recently escaped from prison 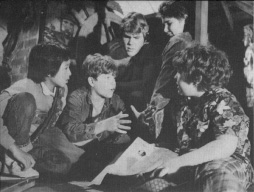 The boys discover the map and… 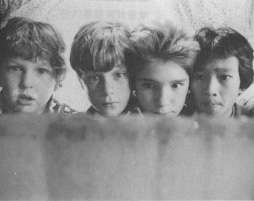 its secrets really open their eyes. 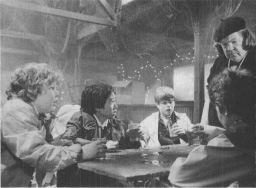 The Goonies meet Mama, who doesn't make the most gracious waitress. 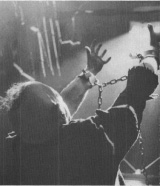 Sloth, before the Goonies set him free. 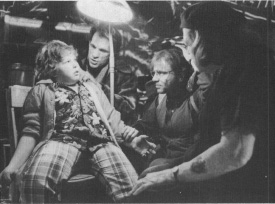 Chunk is interrogated by the Fratelli's while the rest of the Goonies make their way to the underground treasure (Below). 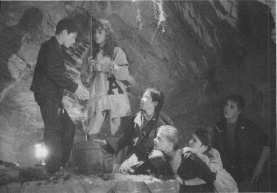