Read The Hammer of the Sun Online

The Hammer of the Sun 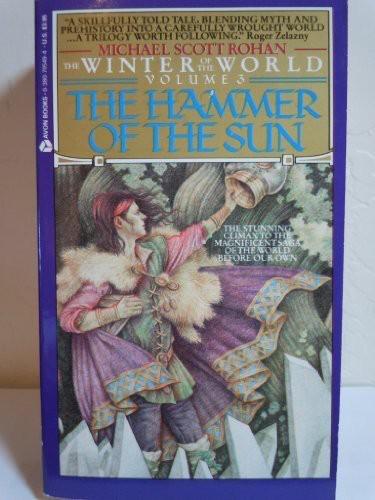 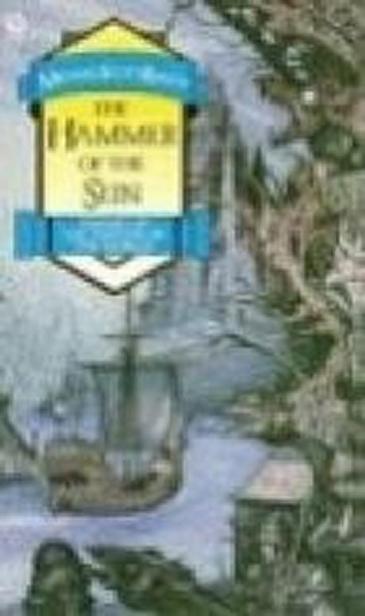 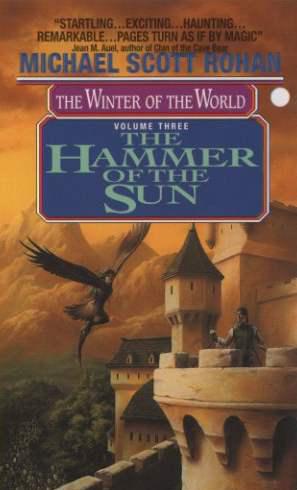 The Winter of the World Trilogy
by Michael Scott Rohan

Volume 1: The Anvil of Ice

Published by arrangement with William Morrow and Company, Inc.

All rights reserved, which includes the right to reproduce this book or portions thereof in any form whatsoever except as provided by the U.S. Copyright Law. For information address Permissions Department, William Morrow and Company, Inc., 105 Madison Avenue, New York, New York 10016.

Chapter One
- The Forging

Chapter Three
- Into the Night

Chapter Five
- To the Heart of the World

Chapter Nine
- The Airs of Freedom

Chapter Eleven
- The Hammer of the Sun

Chapter Twelve
- The Coming of the Spring

The happiness of men is fragile; for so are we made that all our gains carry within them the seeds of loss, and too often we ourselves may sow them. After the events chronicled in the Book of the Helm, many long years of such happiness awaited Elof and Kara whom he loved, and the friends they had won; and for all he knew, in the pride and prime of his years, they might have lasted forever. But it was he himself who was to end them, in such folly as only wise men may create, and endure terrible trials in consequence. Yet from that ill sowing much else was to grow; and of that the Book of the Armring tells.

Chapter One
- The Forging

It was her restlessness that roused him, the slender body beside him twisting and turning beneath the covers of heavy tapestry, admitting the keen morning air to play over his naked skin. For a moment he lay half-drugged with sleep, dimly aware of a deeper chill growing within him. He knew it well, that chill, all too well of late; in part it was excitement, oddly tinged with guilt. But even more of it was fear. In sleepy anxiety he rolled over, put out an arm to enfold her; it brushed her flank as she rose, and dropped on the warmth of the empty sheet. His eyes blinked open, she was stepping onto the balcony, her skin pale as the dawn sky beyond, lifting something to her shoulders. A swirl of white hid her back, fell back to her sides, its lining black as her hair. Then her outstretched arms raised the cloak in a great spreading sweep, hiding the sky; fear stabbed him awake. He sat up, cried out. Her arms dropped, but in falling the cloak billowed out, the lining flashed, and the air whistled with the downstroke of wide black wings. A great swan surged up from the balcony and wheeled dark against the pallid airs, lifting and swooping with a lazy grace out over the sleeping rooftops and down towards the sea.

He cursed and sprang from the bed, his feet tangling in the spread skins beneath, and flung aside the curtain of the aumbry behind; from its highest shelf he seized a light metal cap and clapped it onto his head. A spray of mail fell icy about his cheeks, chilled his neck as he closed it with clumsy fingers. Fear flamed in him, fear and a fire still hotter. So it was, as the tale is told, that there awoke in his heart that wish, wholly loving and yet tainted by darker and more ruthless desires, that was to turn the course and flow not of his brief existenence alone, but of the whole Winter of the World. He drew breath an instant, forced himself to think, while the black speck dwindled in the swelling light.

An image formed in his mind; he gave it substance, shape, and as it burgeoned a wave washed over him, a prickling surge of pain, cold and metallic, that trailed behind it a sense of vast pressures. He let fall his hands, and felt the air grow thick beneath them, a sudden urge of overwhelming power at his breast that lifted him high, higher, across the tangled bed and out over the balcony in a single thrusting embrace of the air. His legs trailed, he angled his feet in the rush to steady him as he rose; his eyes, grown newly keen, sought out the distant wing-beats. Already they were out beyond the harbour; with a fierce, voiceless hiss he angled his wings and plunged down the the sky in pursuit. Below him the ships of the great fleet rocked gently at their moorings, no-one stirring on their decks, and at the sight of them a cool thread of doubt grew among Elof's anger. He threw all his strength into his wings, arced high above the sea wall and out over the swell that heaved like the breathing of some vast monster, low but deep. Over it, now low, now high, sped Kara, but for all her speed he was gaining, he was upon her, the shadow of his wings flickered on her back as he stooped to her. She wheeled effortlessly, and rose to meet him. Level with him she flew, and passed so close that her back brushed his breast and their flight muscles rippled together under the sleek black down. Her neck snaked against his, writhing teasingly, then, suddenly, down ruffled against bare skin, her skin. Up and past him she surged, in woman's shape once more; but from her shoulders vast black wings still beat, and among their feathers was a single flash of gold. Startled, he threshed clumsily after her, and her laughter rang bright in his ears. He struggled to concentrate, to clothe himself in a new shape as she had, but he could not imagine himself so, could not accept the strangeness of it. He faltered, fluttered on the freshening wind, panicked, and felt the shape that masked him fall away, the rushing air chill upon his naked skin. He flailed at emptiness and dropped like a stone.

The uprush took him, flung him about, showed him the steely sea sweeping up to meet him. Then it whipped him around again and Kara filled the sky, swooping down upon him, a vision of eerie loveliness. He reached his arms out to her, and her great wings closed about him, enveloped him. He touched her, clung, and felt her legs twine around him. Her lips pressed down on his with bruising force, her tongue flickered against his and her breasts thrust against him with every wing-beat; he hooked an arm about her heaving shoulders, caressed her with his free hand, felt the taut peak of her fierce excitement, the heart that leaped beneath. He stroked his fingers down her ribs to her flank, across her taut belly, and she threw back her head and cried out. They were rising now, the sea swaying away beneath them with every beat of the black pinions, faster and faster; he felt a surge of strength to match her own, and crushed her to him. Her back arched, her legs quivered against his, then she folded fiercely forward and crossed them about his waist. Joined, they scaled the heights of the sky while beneath them the horizon rolled away to reveal the sun, and they lifted into its first clear flare of gold. It blazed on Kara's pale skin as she swayed back in a tremor of delight, and to Elof s eyes she seemed to flow with a flood of molten light; it spilled over into him, rushed searing through his body, a torrent that burst into his mind and blotted out thought. He felt Kara stiffen convulsively against him, her wide wings . outhrust, quivering. With the high scream of a great bird she toppled backward in the air; they went spiralling down into emptiness, uncaring.

Only in the last instant, as the sea seemed to reach up and grab at them, did Elof recover his wits. Kara gave a wild yell, then he felt a great stinging slap of cold across his back, that all but drove out what little breath was left him. Water rushed into his open mouth, stung his eyes, roared in his ears; it sucked the heat from him, though his skin burned with the impact. Instinctively he kicked out against the icy embrace, felt himself rising, and in a sudden qualm of panic snatched for the precious helm. His fingers touched metal, and he knew it hung still fastened about his neck; it was no greater relief when an instant later he burst through the surface and could draw breath. Gasping, he clawed his streaming hair out of his
eyes;
a wave lifted him, and he looked anxiously about. He was floating naked in a strong swell, the shore no more than a sun-reddened streak of grey in the distance, and he could see no other shape among the wavecrests. Then came a splash, and Kara's light laughter rippled like harp strings among the soft rush and thunder of the ocean. Two warm and wholly human arms slithered around his neck, and her slender body was a startling warmth in the dawn-chilled waters.

"
Kara
! You…" Then he had to hold her close and kiss her, taste the salt on her soft neck. Her dark eyes sparkled into his, and he sought to see past the gentle mockery he read there, and heard in her voice.

"But you were not worried, surely? For
me
? Who in all the world has less to fear from any element than I?"

He held her to him, tight, as if at any moment she might slip away into the depths beneath. "I was afraid you might have… changed again. Gone where I could not follow."

She stroked his forehead. "Why would I do that, my heart, even if I could? Have you not' bested me before, you and your cunning helm?"

"Aye, but it strains me, Kara; I was not born to this constant shifting and change. And I love you as you are; I would have you so - "

She lowered her eyes and smiled a small smile. "And did you not, just? In what counts, at any rate…"

Elof laughed, though it rang hollow in the emptiness within, and bent his head to hers. "That I'll grant you! Though the rest was strange enough, in all conscience it was good. But I'm wearied now, and the ocean's ice-chill yet at this hour; let's be swimming back for breakfast, eh?"