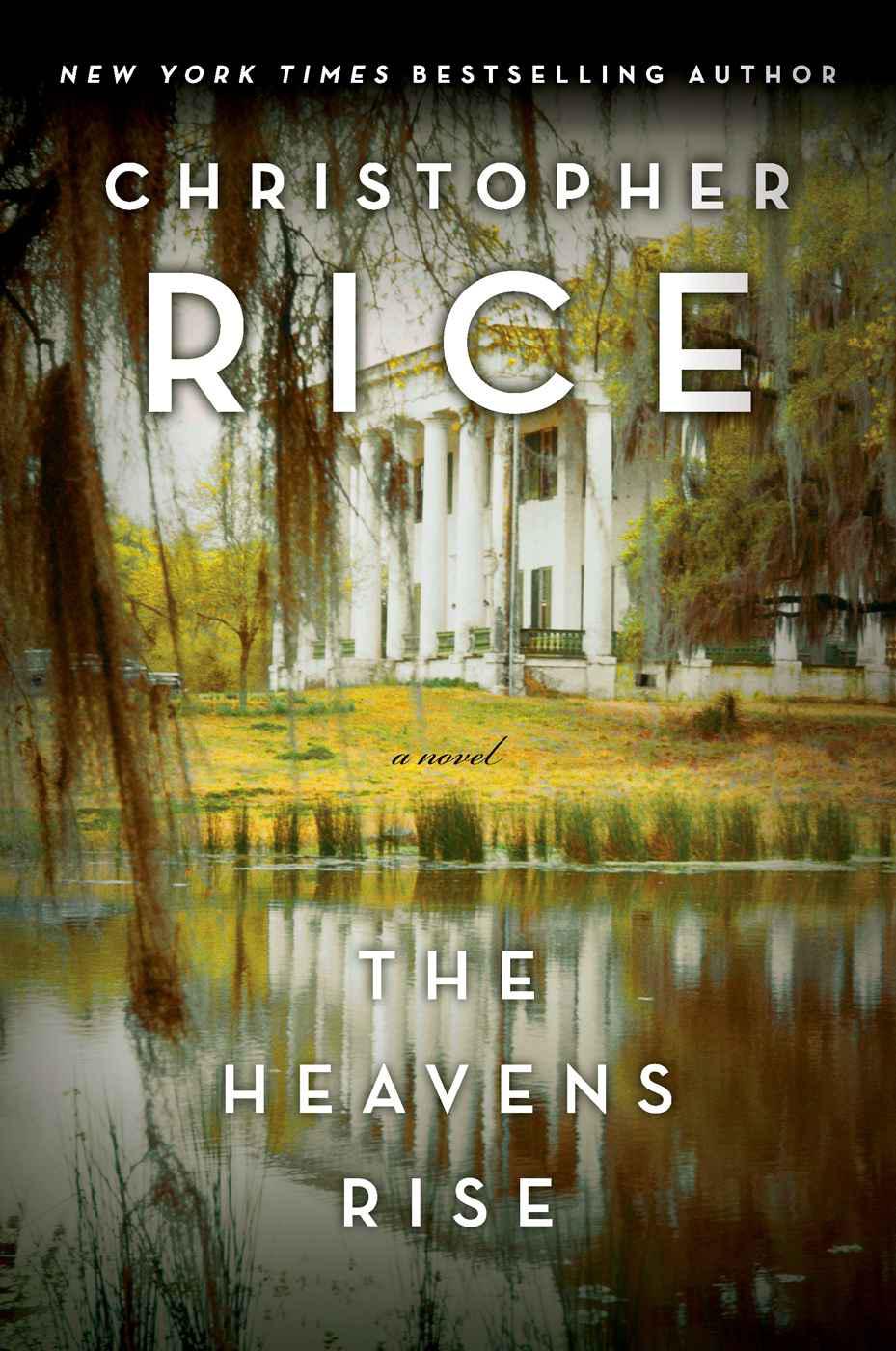 For Sid Montz and Christian LeBlanc

FROM THE JOURNALS OF NIQUETTE DELONGPRE

I
’m not sure how long it was down there.

The soils beneath South Louisiana are constantly shifting; a mass of alluvial sands deposited over hundreds of thousands of years by the Mississippi’s flow. It could have worked its way up from deep within the earth, possibly pressured by the nearby upwelling of one of the many salt domes that dot the bottom of my home state.

Or it could have been drawn to the surface by the work of some retired and forgotten oil well. I’ve studied old survey maps. There were two within a five-mile radius of our property. But they were capped and abandoned decades ago.

I remember when my father got the call that the contractors had discovered some kind of artesian well just a few yards from where they were laying the foundation of the new house. I remember how excited he was as he breathlessly explained the possibilities to my mother and me. The cost of running a larger pipe between Elysium and one of the parish’s main water
lines was considerable; that’s how isolated the place was. But after a little investigation, the aquifer turned out to be woefully small, an isolated pocket beneath layers of bedrock that had long ago been cut off from its original source.

Still, Dad wanted to put it to some kind of use, even if it was only temporary.

We had so many excited conversations about that well. I can remember us all sitting around the dining table speculating on the ornate uses we could put it to. A fountain, perhaps. A koi pond was my idea. “Too California,” my mother protested.

She was the one who had named the property years before I was born. Elysium, a final resting place for the heroic and virtuous. It was an odd name for an isolated acreage of mud and cypress that was a good ten-minute boat ride from its nearest neighbor. But my mother had an obsession with Ancient Greece that stemmed from the pagan-themed Mardi Gras parades that ruled our lives each winter. The significance of the name ended there, though. The house my father eventually built on the property wasn’t even Greek Revival. It was a raised Acadian cottage, with wraparound screened porches and a one-story brick foundation to protect it from floods. Still, if there was one thing my father worshipped more than his lifelong dream to construct an elegant idyll in the swamp, it was my mother, so the name stuck. Back when he was a college student, and the place was just two trailers, a long oyster-shell driveway and walls of deep, dripping shadows on all sides, my father proposed marriage there beneath ropes of string lights he and his fraternity brothers hung that afternoon. A photograph of the happy couple taken on that night, surrounded by several of my father’s brawny accomplices, hung on the wall of our front parlor for years.

A swimming pool. That’s what my father wanted. If the well eventually did run dry, we could always feed the pool from the main water line, he insisted.

I was resistant at first. The idea of a gurgling, classical French fountain surrounded by all that wild foliage appealed to my teenage love of the Victorian
gothic. But my father used a very simple and cogent argument to change my mind; I loved to swim, but with my mortal fear of snakes, I’d never so much as stuck a toe in the thick finger of black water that snaked through our property like the waterlogged path of some giant jungle serpent. But if I had a cool, perfectly clear pool of pure water, direct from the source . . .

Eventually, I gave in. Of course my father still asked for a show of hands, which seemed like a silly formality to me, but I cast my vote anyway. A swimming pool it was.

It was a decision that destroyed our lives
.

T
he patient in Room 4 was named Marshall Ferriot and he couldn’t dream.

Instead he experienced vivid eruptions of memory that came from the center of what he perceived to be his person. After the terrifying fall that landed him at death’s half-open door when he was only seventeen, he lost all sense of his physical body.

Only rarely was he given some sense of the passage of time and, when it came, it was always accompanied by the jarring realization that his home was a dark, purgatorial place where dreams and memories, all those aspects of human beings people consider to be intangible, took on discrete wavelengths before they were stripped from those human souls they once defined.

In these moments, he could feel himself dragging against a current of souls broken down to their raw constituents
—
a quantum flow of hopes, nightmares and memories
—
and it made him feel like shark bait
being towed through open sea. While he had no sense of his limbs, he knew he was still too fully formed to be worn down and passed through this pulsing refinery of the spirit.

Then, a moment of stultifying blackness would arrive, stealing the passage of time, an intermittent distortion that turned a march of ten years in the conscious world into an endless tape loop of revelations lost, rediscovered and lost again.

Sometimes he could hear the nurses. Their whispers and their shouts would come in at equal volume and, with them, a dim awareness that they spoke of him often because they were afraid of him.

But, for the most part, Marshall Ferriot’s consciousness fluctuated steadily between vivid memories of the time before his fall and a terrifying awareness of his paralysis at the edge of death.

And the memories were growing stronger. They had come to include rich sensuous details that suggested an awakening of some kind might be close at hand. But first they carried him back to New Orleans, the city of his birth, and to the swamps of Tangipahoa Parish and a place called Elysium, where he’d been granted his first and last taste of a beautiful girl with cat-eyes and honey-colored hair, a girl whose very name filled the remnants of his soul with sustaining rage.

H
er motivation was revenge, he was sure of it. And that was fine with him. At seventeen, Marshall Ferriot prided himself on being a young man who could recognize opportunity when it arrived and, with the fiery end of the passionate romance between Niquette Delongpre and Anthem Landry, opportunity arrived at Marshall’s doorstep with bells on.

He had wanted her since they were sophomores, after her breasts had swelled to fullness over the course of one summer, after her walk had acquired a swaying, adult confidence, probably ’cause she’d given up her virginity to that stupid fathead she’d fallen head over heels for the minute he’d transferred into their class. Since then, Marshall Ferriot had spent hours watching Nikki glide gracefully through the hallways of Herschel B. Cannon School, all the while wondering what the skin around her nipples tasted like, or how much pressure he’d have to
bite down on them with before she let out a pained yelp that would curl his toes with pleasure.

He’d concocted a few plans over the years, most of them intended to get her white-trash boyfriend kicked out of school and sent back to Jefferson Parish where he belonged. But it was clear the two of them were too much in love to be driven apart by such a meager separation, so Marshall had even thought about cozying up to that little homo she was best friends with, maybe letting the guy give him a BJ or two if he promised to do Marshall’s dirty work. But Ben Broyard, pipsqueak that he was, always looked at Marshall as if there was a stink coming off of him, as if he could detect the dark thoughts Marshall nursed about people who made him angry and thought they were kind of stupid, even if they did involve knives and rope.

What Marshall had been waiting for was a golden opportunity, a sign that the stars had aligned on his behalf, and it didn’t come until the last months of senior year. There had been plenty of girls to occupy his time along the way, of course. There were the real girlfriends, the ones befitting a young man of his stature and breeding, classically pretty, with first names that were more often used as last names for men
—
Chesley, Whitney, Preston
—
girls who never let him go below the waist unless he got them shitfaced on Zima. And then there were others. The ones who could keep secrets. The band geeks and the computer dorks. The ones so grateful for any kind of attention from a guy like Marshall they’d let him use things like beer bottles and staplers.

But Nikki Delongpre, she was the prize. The ultimate. Everybody agreed; there was something
different
about her. Like the fact that she’d been the only freshman ever to make varsity cheerleading, and then had ditched the squad a few months later because, as she told everyone who asked, she thought she was too young to have an eating disorder. Stuff just didn’t get to Nikki the way it got to the other girls at Cannon; she wasn’t a gossip, she rarely drank. And until Anthem’s betrayal, she was rarely swept up in some tearful drama over something somebody
might have said about her three weeks ago. Marshall had overheard two teachers talking about her once and their words had seared themselves into his mind. While the first asserted
the Delongpre girl
had a wisdom beyond her years, the second—in the same kind of superior tone Marshall’s mother used to discuss the moral failings of Democrats—asserted that Nikki was a perfectionist, and if she was ever going to really grow up, she would have to stop planning her life and actually begin living it.

The Battle At Three-Cross by William Colt MacDonald
A Boy and His Tank by Leo Frankowski
The Recruit: A Taskforce Story by Brad Taylor
The Bridal Path: Danielle by Sherryl Woods
Their Marriage Reunited by Sheena Morrish
A Hard Witching by Jacqueline Baker
The Man Everybody Was Afraid Of by Joseph Hansen
Broken to Pieces by Avery Stark
Absolute Beginners (Absolute #1) by S.J. Hooks
The Second Time Around by Angie Daniels
Our partner