Read The Hell You Say Online 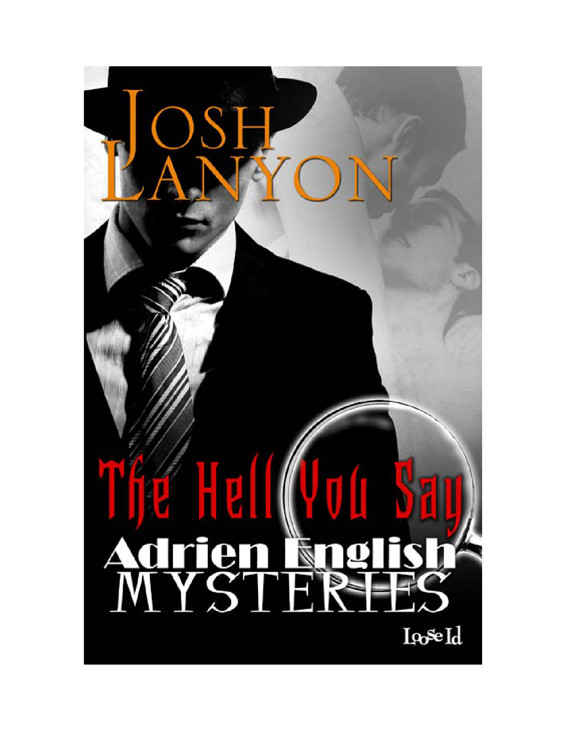 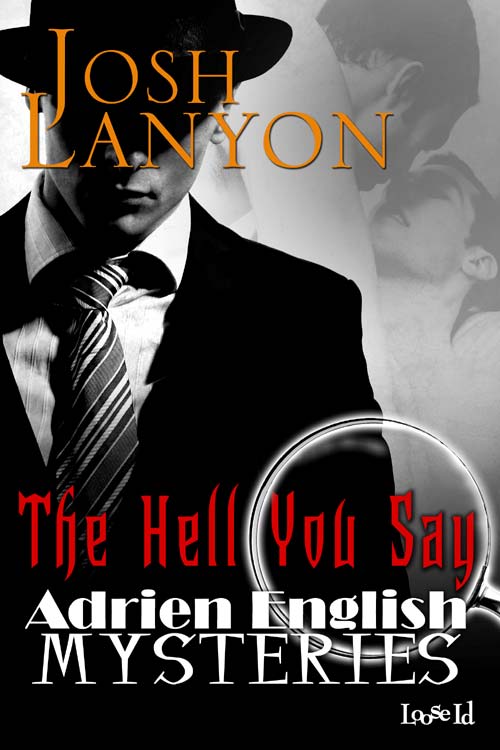 THE HELL YOU SAY

This e-book contains sexually explicit scenes and adult language and may be considered offensive to some readers. Loose Id® e-books are for sale to adults ONLY, as defined by the laws of the country in which you made your purchase. Please store your files wisely, where they cannot be accessed by under-aged readers.

The Hell You Say (An Adrien English Mystery) Josh Lanyon

All rights reserved. This copy is intended for the purchaser of this e-book ONLY. No part of this e-book may be reproduced or shared in any form, including, but not limited to printing, photocopying, faxing, or emailing without prior written permission from Loose Id LLC.

Available in Adobe PDF, HTML, MobiPocket, and MS Reader Printed in the United States of America

There is nothing new under the sun but there are lots of old things we don’t know.

To Nick (the other one), who keeps me on the straight and narrow. Well, on the narrow, anyway.

And finally, special thanks to the readers who kept pushing and pleading for a new Adrien English novel. This one’s for you.

The voice on the phone rasped, “Bones of anger, bones of dust, full of fury, revenge is just. I scatter these bones, these bones of rage, enemy mine, I bring you pain. Torment, fire, death the toll, with this hex I curse your soul. So mote it be.”

I handed the receiver to Angus, who was facing out the “We Recommend” stand by the counter. “It’s for you.”

He took the receiver and put his ear against it as though expecting an electric shock.

He listened, then, hand shaking, he replaced the receiver and stared at me. Behind the blue lenses of the John Lennon specs his eyes were terrified. He licked his pale lips.

“He’s a homicide detective,” Angus muttered. “Plus he doesn’t like me.”

True on both counts, but I tried anyway.

“He doesn’t dislike you, really. Besides, you’ve got to talk to someone. This is harassment.”

“Harassment?” His voice shot up a notch. “I wish it was harassment! They’re going to kill me.”

A customer lurking in the Dell Mapbacks coughed. I realized we were not alone in the bookstore.

I gestured to Angus. He followed me back to the storeroom that served as my office. So far we’d had a grand total of three customers browsing the shelves on this gloomy November day. I half shut the door to the office, turned to Angus.

I thought my tone was pretty calm, but he put his hands out as though to ward me off.

He swallowed The Word. “They’ll kill me.”

“I thought they were already trying to kill you?”

“I mean physically kill me.”

They know where Wanda works. They --”

“Why don’t you leave town for a while?” I interrupted. “It’s nearly Christmas. Why don’t you…take a vacation?”

Angus had worked at Cloak and Dagger Books for the past year, but I knew little about him beyond the fact that he was finishing up an undisclosed undergrad program at UCLA which seemed to entail an awful lot of courses in folklore, mythology, and the occult. He was twenty-something, lived alone, and was a decent, if irregular employee. Lisa, my mother, insisted that he was on drugs. Jake, my sometimes lover, was convinced that he was a nutcase, but I tended to believe he was just…young. I studied him as he stood there in his baggy black clothes, like an émigré from the dark side. He was shaking his head in a hopeless kind of way, as though I still didn’t get it.

“Yeah,” I said, warming to the idea. “Why don’t you take Wanda and split for a week or two? Let this all blow over.” I dug through the desk drawer for my checkbook.

Not that I believe throwing money at a problem solves the problem -- unless the problem is lack of money. And not that I ordinarily recommend trying to run away from your problems, but this particular problem rang a few bells for me. Or so I thought at the time.

Angus stood silent while I wrote out the draft. I tore it off. When I handed it to him, he stared at it. He didn’t say a word. Then, as I watched, a tear slid down his face and dropped on the check. He gave a great shuddering sigh, started to speak.

I cut him off. “Listen, kiddo, do us both a favor. Crank calls from the crypt are bad for business.” I headed for the door.

I had been about ten minutes late meeting him at the car dealership on East Colorado Boulevard. My ten-year-old Bronco was on its last legs, and Jake seemed to believe that I was incapable of making an informed buying decision unless he was my informant.

“Gave him eight hundred bucks. Told him to take Wanda Witch away for the holidays.” I gazed at the rows of sleek sports cars and rugged-looking SUVs gleaming in the tequila sunset. Palm trees rustled overhead. Tinny Christmas carols issued from the loudspeakers in not-so-subliminal messaging.

I watched Jake’s blond and buff reflection materialize behind me in the windshield.

I shrugged. “I’ll write it off as his Christmas bonus.”

“Uh-huh.” I felt him study my face. “Well, Mr. Trump, is there any point in our going inside?”

“Did you never hear of the great American tradition of financing?”

He snorted. I met his tawny gaze. “How the hell is running away supposed to solve anything?” he asked, and for a second, I thought we were talking about something else entirely.

“I wasn’t looking for a long-term solution.” Before Jake could answer, I added, “I doubt if I need one. They’re kids. They have the attention span of…what is it? One minute for each year of life. We’re looking at twenty minutes of terror. Tops.”

Jake’s lips twitched, but he said, “These kids are all part of a witch’s coven based out of Westwood?”

I stroked the hood of a silver Subaru Forester. “New meaning to the words ‘Teen Spirit,’

huh?” I studied the sticker price on the window. “From what I’ve picked up, they all took part in a class on demonology or witchcraft about a year ago. I guess somebody inhaled too much incense during the lab.”

“They went off and started a coven?”

“I’m guessing. It’s not like Angus has been forthcoming on the subject. Revealing Count Chocula’s secrets carries a stiff penalty.”

Red and green Christmas lights strung across the lot flashed on. They reminded me of glowing chili peppers, but maybe I was subconsciously influenced by the Mexican restaurant across the street. I remembered I hadn’t stopped for lunch. My stomach growled. I wondered if Jake could take time for dinner.

If I whined about being hungry, he’d make time. He was appalled by my eating habits, being one of these fitness fanatics who believes the rule about three balanced meals a day is engraved on a stone tablet. We hadn’t seen much of each other lately. I was willing to risk another lecture on the benefits of complex carbs.

“You shop around, you compare prices, you get the vehicle right for you,” he observed, watching me linger over the Forester.

“You don’t need another gas guzzler. How about a coupe? How about pre-owned?”

At my tone, a muscle tugged at the corner of his mouth. Reluctantly I moved down the aisle of cars to a blue two-door. Tinted windows, power sun roof, Bose speakers. The price was right, too. Climate controlled. What did that mean? Air conditioning?

Jake said suddenly, grimly, “Believe it or not, this kind of shit can get way out of hand.

Hollywood PD turned up a Jane Doe in the Hollywood Hills about a month ago. Word is she was the victim of a ritual killing.”

I was mostly kidding, but Jake said thoughtfully, “I kind of wish you hadn’t sent the kid out of town. I’d have liked to talk to him.”

“You can’t think Angus is involved in that,” I protested. “He’s a bit odd, granted, but he’s a decent kid.”

“You have no idea what he is, Adrien.” Jake, a ten-year veteran of LAPD, used that cop tone when I exhibited signs of civilian naïveté. “You’ve employed him for a few months, that’s all. You hired him through a temp agency. You think they ran a serious security check?”

“You think it’s necessary for working in a mystery bookstore?”

He wasn’t listening. “There’s this whole satanic underground we’ve been hearing about since the ’80s. There might not be evidence of an organized movement like certain religious groups claim, but we’ve seen plenty of injuries and deaths resulting from people taking this stuff seriously. And plenty of people turning up in psych wards. It’s ugly and violent, but a lot of kids are attracted to it.”

“So hopefully this scares the hell out of Angus, and he gets it out of his system.” I tried to picture myself behind the wheel of the coupe, gave it up, headed back to the silver Forester.

When I finished signing the loan docs, Jake and I went across the street to grab dinner at the cantina. I had traded in the Bronco, and since the dealership was going to install a stereo system in the new vehicle, I needed a ride back to my place. Jake let himself be coerced.

While we waited for our meal, I watched him put away two baskets of tortilla strips.

He munched steadily, as though he were being paid by the chip, gaze fastened on a wall planter bristling with plastic bougainvillea.

Still crunching, he paused mid-reach for his Dos Equis. “Sure. Why?”

“I don’t know. You seem preoccupied.”

“Nope.” He swallowed a mouthful of beer, eyes on mine. “Everything’s cool.”

Our relationship was not an easy one. Jake was deeply closeted. He claimed it was because he was a cop -- that the job was tough enough without having to go to war with the guys who were supposed to be on your side -- but I’d come to believe that it was more complicated. Jake despised himself for being sexually attracted to men. Though he had been a good friend to me and was a physically satisfying lover -- when he was around -- there was a certain tension between us that I sometimes feared could never completely be resolved.

Silent Hall by NS Dolkart
Girl Rides the Wind by Jacques Antoine
Third-Time Lucky by Jenny Oldfield
Mistress of the Hunt by Scott, Amanda
World by Aelius Blythe
Pulpy and Midge by Jessica Westhead
Pennies From Heaven (The Bella Novella Collection Book 3) by Janice Thompson
Havana Bay by Martin Cruz Smith
The Book of Nonsense by David Michael Slater
Just a Matter of Time by Charity Tahmaseb
Our partner