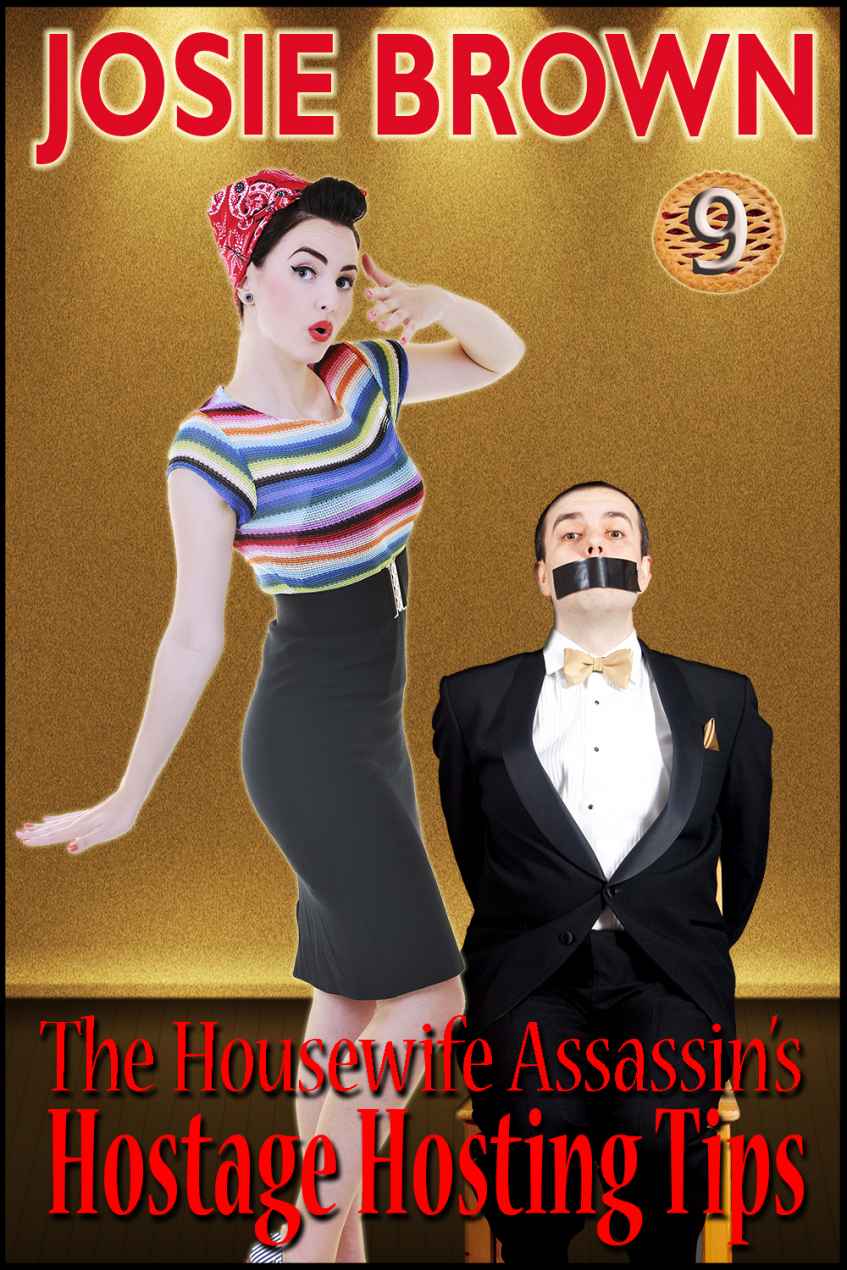 Chapter 1 The Best Way to Prep for a Party!

Chapter 2 Choosing a Theme for Your Party

Chapter 5 How to Choose a Venue

Chapter 6 Entertaining on a Budget

Chapter 7 How to Stuff a Wild Canapé

Chapter 8 Should You Use Cater Waiters?

Chapter 12 Dealing with Your Guest’s Requests

Chapter 18 Keeping out the Riff-Raff

Chapter 22 And a Good Time Was Had by All!

The Best Way to Prep for a Party!

So that your next gathering is the talk of the town (in the right way), do as much as possible in advance. That goes for picking the date of your event, making your signature hors d'oeuvres, and getting dressed early, so that you’re ready to meet and greet those guests who always appear ahead of schedule.

Of course, for the early birds, you can always hire guards with MP5s. A few rounds fired over their heads will certainly make them think twice about their obsession to arrive ahead of the crowd!

As for any guest who is rude enough to whisper under her breath, “Boooooring…” invite her to see the newest room in your house–the wine cellar! The fact that it doubles as a dungeon can be revealed after you’ve drugged her with whatever Kickapoo Joy Juice you’ve injected into that very expensive Chateaux Margaux 1995 she’s been dying to try–

“Dying,” of course, being the operative word.

His body, encased in a black body bag, lies on a marble-topped table in the morgue.

The room’s chilly temperature sends a shiver up my spine, but the coroner–a beefy, barrel-chested guy named Jerry–thinks it is widow’s nerves that are undermining my stoic composure.

Jerry waits for my lethargic nod before zipping open the bag–from the bottom first, to read the toe tag. “Yep, the ID is correct.” He gives a half-hearted chuckle. “It’s never good when the attendant pulls the wrong corpse–er, body–”

I stiffen at his idiotic attempt at humor.

The coroner stutters through his faux pas. “I–I meant to say
loved one
. Really, I did.”

I pat his arm to indicate that I forgive him for his mistake.

He zips up the bag at the foot, and steps toward the head of the bag, where the zipper pulls down.

Slowly, he opens it.

My reaction is the same as that of any widow who is looking at the waterlogged body of her husband–I stifle a moan as my knees buckle.

The coroner catches me in his arms before I collapse. “There, there,” he murmurs sympathetically. “It will be over in a moment.”

When, finally, my composure returns, I lift the short black veil that barely covers my eyes with a gloved hand in order to wipe away my tears. Choking on my sobs, I turn my head.

In truth, I’m doing my damnedest to keep from laughing at the corpse in front of me.

Oh yeah, that’s him all right.

May he rest in hell.

Although drained of blood and life, his once proud and handsome face is now pocked with blisters, made even more hideous because of its greenish-black hue. Three weeks at sea without sunscreen will do that to you. I hope the tourists who first spotted him while they were joyriding on the Princess Cruise Line on its way to Alaska take this lesson to heart.

At least his lids are closed. I guess that’s a good thing, considering that they caved into his sockets, once his eyes were ravaged by sea critters. They also nibbled away at his skin, which was loosened as it absorbed the naturally chilly water found this far north in the Pacific Ocean.

What is left is embalmed in waxy body fat.

What a way to go.

And yet, I feel no pity.

I do feel hungry, though. In the little French bistro around the corner, there’s a filet mignon with my name on it. Very rare.

And certainly no fat.

Time to move this charade along. I bow my head.

As I wipe imaginary tears from my eyes, I whisper, “If–if you don’t mind, I’d–I’d like a few minutes alone with…with him.”

Jerry hesitates. Finally, he shrugs. “No problem at all, ma’am. Take as long as you want.” He lumbers toward the exit. The door closes behind him with a small click.

Time’s a wasting. With both hands, I wrench open the mouth of my supposedly dearly departed. The force snaps his neck in half.
Yowch!
My bad.

Well, hopefully, I’ll be long gone before the coroner notices that this corpse is now a bobblehead.

His mouth is open just wide enough for me to slip my hand into it. I reach for the second molar on the left side of his upper jaw–the maxilla. Wrapping my fingers around it, I twist as hard as I can.

Nope, it can’t be the right tooth because it’s as solid as a rock.

On to the next molar–no movement. The third try is also a bust.

I hit gold–make that porcelain–with the fourth tooth, a premolar with a cap. While it twists, I can only get it halfway off.

Believe me when I tell you that I’m not a sadistic necrophiliac (or for that matter, a desperate housewife who’s obsessed with the
Twilight
and
Fifty Shades
series), but rather an agent on a black-ops mission to protect the free world from terrorism. Inside the crown is a microdot with locations of well-placed terrorists–saboteurs planted in key defense administration positions in governments throughout the world: England, Germany, Japan, France, and yes, the United States, too.

However, they’ve yet to learn that one of their puppet masters was, until recently, fish food.

“Speed it up, Donna. The coroner is looking at his watch,” Jack Craig, my mission partner, warns me through my remote ear bud. Between it, my 5MP cam feed contact lenses, and the hack job our tech-op, Arnie Locklear, did on the security feed here at the morgue, I’ve got some coverage.

I pull out a pair of needle-nose pliers, but the handle is so big that I can’t fit it and my hand into his mouth, so I take a wild guess which way to turn it in order to loosen the cap, and twist.

It comes off–not the cap, but a tooth–

And the wrong one at that.

“Oopsy,” I murmur, as I toss the tooth over my shoulder.

The fact that I’m strapped into four-inch stilettos and a short flouncy black dress doesn’t stop me from scurrying onto the morgue table in order to straddle my dead darling. This puts me in a better position to see the target tooth.

It also allows me to feel something I might not have noticed before, because of the draping of the body bag:

To my amazement, he has a hard-on.

Jack is laughing so hard into my ear bud that I have to pull it out of my ear.

“Happens all the time–especially under the circumstances. When he went overboard, he got tangled up in the mooring rope; he died by strangulation as opposed to the fall.

It’s called a post-mortem priapism, or a death erection.”

The fact that he somehow got snagged in a Japanese trawler’s net meant for Bluefin tuna and choked to death shows you just how polluted our oceans have become.

All of a sudden, I’m hungry for sushi.

I frown. “That doofus, Jerry, could have warned me.”

I’ve just wrapped the pliers around the right tooth when Jack tells me, “Better hustle. He’s coming your way.”

I twist the pliers with all my might, but the crown doesn’t move.

I hear the click of the morgue’s heavy door.

I’m left with no alternative except to suck face with the corpse of a despicable terrorist.

It helps that I’m thinking of all the great ones in my life–Jack, first and foremost. Okay, yeah–admittedly, my dead (so it seems, albeit still hard to believe) ex-husband, Carl, curled my toes a time or two.

But that was before I knew he was a terrorist, and certainly before his many attempts to kill me.

This is neither the time nor the place to reminisce about the man who haunts my nightmares. When it comes to Carl Stone, I’ll never think,
Rest in peace.
Instead, I declare,
Good riddance.

The last laugh is on him.

Okay, maybe it’s on me. As it turns out, the coroner can’t help but stutter when he sees me. I guess it’s the first time he’s walked in on a widow having a make-out session with one of his corpses.

I glance over, feigning surprise, then sigh loudly. “Excuse me–
do you mind
?”

He takes the hint and skedaddles. This time, the door closes with a bang.

I wipe yucky grave wax from my lips. Seeing it on the back of my hand makes me sick to my stomach.

“Are you okay?” The sympathy in Jack’s voice is all I need to buck up and get back to work.

To speed things up, I put both hands in Dearly Departed’s mouth, and wrench his jaws wide open. Except for his emerald hue, he could have modeled for Edvard Munch’s painting,
The Scream
.

Well, well, whattaya know? In addition to the crown, he has loads of fillings, too. Note to self: set an appointment for my children–Mary, Jeff, and Trisha–as well as Jack and myself, with our local dentist, Dr. Yarborough.

“Oh, hell, Donna, the coroner is headed back your way, and he’s got company. He doesn’t look happy, either.”

It’s now or never. Once again, I position the pliers over the tooth. I tug. I yank. I jerk. “I’ve–almost…”

For inspiration, I hum,
Hit him, baby…one more time…

With both hands, I yank up as hard as I can–

And topple over backward onto his thighs.

It’s not a knife. Instead, I was speared by Dearly Departed’s hard-on.

Jack sighs. “Now, seriously, get the hell out of there! He’s on his way in with Hardy Higginbotham’s real widow!”

Hardy, whose business cards call him out as an international financial consultant based in Vancouver, British Columbia, was on his yacht, circling Vancouver Island.

In truth, Hardy headed up new business development for the Quorum, an international conglomerate of businessmen who finance terrorism around the globe. Their investments in these unusual start-ups reap big bucks in the munitions businesses they own, such as banks used for money laundering, and companies in the transportation, construction, and prison management industries.

Tuffer's Christmas Wish by Jean C. Joachim
The Game by Kyle, Calista
Blast from the Past (A Mac Faraday Mystery) by Carr, Lauren
The Millionaire Meets His Match by Kate Carlisle
Street Gang by Michael Davis
Tamberlin's Account by Munt, Jaime
DEAD GOOD by Cooper, D A
Divorce Horse by Johnson, Craig
The Night Crew by John Sandford
Running Fire by Lindsay McKenna
Our partner