Read The Hunted (The Chronicles of the Hunter Book 1) Online

The Hunted (The Chronicles of the Hunter Book 1) 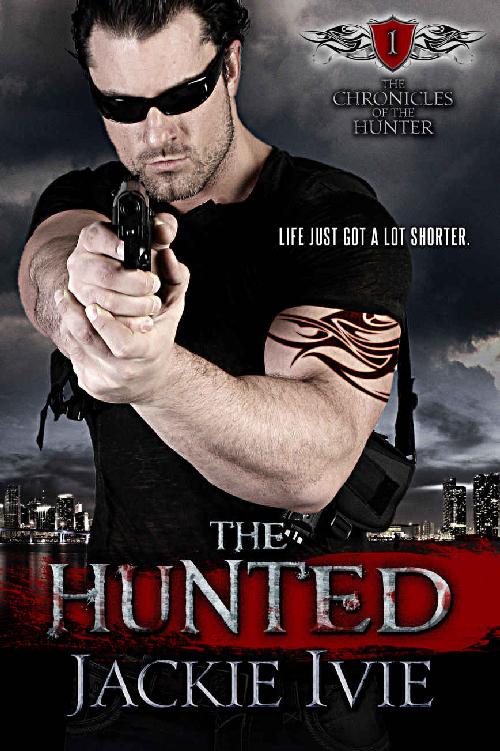 “…THE HUNTED is an exciting suspense/romance that will keep readers at the edge of their seats till the very last page.”

The Hunted is dedicated to my great friend and fellow writer, Miriam Matthews.  Your help and guidance is invaluable to me.  Thank you.  I couldn’t have written LeeAnn and Kane’s adventure without you.

LeeAnn glanced at the digital read-out on the desk clock. Excellent. Her inner clock was working perfectly. The wake-up call was scheduled for 5:00. Her back-up alarm on her phone for 5:03. She looked toward the window next. She hadn’t drawn the room-darkening drapes. That was probably stupid, but she loved things open. Transparent. Open windows. Clear minds. What she didn’t like was subterfuge. Cheating. Shady dealings. That’s why she’d gone into accounting in the first place. Numbers weren’t negotiable. Figures didn’t lie. Unless liars did the figuring.

A groan slid past her lips. She glanced toward the clock again. 4:58 now. She was not looking forward to the breakfast meeting with Chad. The man was charming. Good-looking. Single. Smart. But he had a huge problem with integrity. Thank goodness she’d gone with her gut instinct and never had sex with the guy! Talk about adding complication. Then again, LeeAnn wasn’t an easy type, like he favored. Nor was she the kind of accountant to overlook accounts that ran through millions of dollars without any source of income. Regardless of how handsome, charming, and debonair her business partner happened to be.

The window drew her gaze next. Again. As if it called to her. Pre-dawn was just starting outside, highlighting wisps of clouds. Nothing that would bring rain. Not this week. This was just another hot night in a hot week. She was going to be inundated with sunlight. Miami had a lot of that. Especially in the summer. The city was sexy. Sultry. Sticky. She shouldn’t have turned the air conditioning down last night. Bed linens clung to her legs as she rolled onto her back.

The words were distinct. Separated. Spoken in a hissed whisper. Carried a lot of threat in a definite bass tone, and resonant with all kinds of masculine vibes. They were accompanied by a long cylindrical item that looked like a rifle barrel. Right above her ribcage.

LeeAnn’s heart jumped into her throat, choking her. Her breath caught. Shivers flew down her limbs. Everything went immobile. Deer caught in the headlights. Prey sighted. Spotlighted. Frozen in fear.

Staying still was not going to be a problem.

The rifle shifted farther, elongated. Became a long barrel. Equipped with a large scope. Steadied with his left hand. His other one was on the trigger mechanism. It was attached to a large arm. A really large arm. With a lot of muscle.

Her heart started beating again. Shallow bits of breath were right behind it, followed by mental acuity. She slanted a glance toward him and instantly wished she hadn’t. The guy was hooded. His upper face in shadow. But that didn’t stop her gasp. Nor the series of shivers that started up.

This was beyond interesting. She must be dreaming here. Nothing else made sense. Bad guys weren’t this good-looking. Nor were they sexy as hell. Or ripped. They really weren’t supposed to smell nice, either. This was a really great dream.

The analyst portion of her psyche kicked in. If this was real, she’d have to file a police report. She needed details. Specifics. LeeAnn licked her lips. Concentrated.

She couldn’t see as much as she wanted. It wasn’t light enough yet. He was little more than an amorphous mass in the midst of a lot of black. She could barely make out the tip of his nose down to his shirt collar. A scruff of dark whiskers delineated his jaw. They might match his hair color. He’d dressed in fabric that sucked up light. Everything looked black. No reflection. Not even his gun. The scope was another match. LeeAnn didn’t know a lot about rifles, but he wasn’t going to hit anything vital in that position. Not on her, anyway.

The words were hissed in another whisper. His right arm tensed, putting a lot more forearm definition in her line of sight. She wondered how to describe that to a sketch artist.

He called this moving? She made a face before replying. “Look. You’re in my hotel room. I’m not screaming. I think I’m doing pretty good here. Okay?”

He sighed, sending a slight touch of air across her throat. It lifted all kinds of goose bumps on her skin. She’d selected a peach-colored nightgown last night. It wasn’t covering her shoulder area. In fact, it wasn’t in evidence at all. The satin felt tangled around her, along with the sheet.

“You should have closed your drapes,” he told her.

“Your levity is out of place.”

He gestured with a slight nod. It wasn’t necessary. The moment he’d spoken, a long slice of red came through the window, reaching her approximate ankle area. It started moving up from there. She was guessing on its proximity. She didn’t check. She’d seen too many suspense movies and crime dramas to be innocent. It looked exactly like she’d seen on a screen.

The last words were choked. The frozen feeling came back with a vengeance. The guy was completely unaffected. His reply was in the same modulated, calm, deep voice. For some reason, that was even more frightening.

“Have to find him first.”

His finger moved, the gun pulsed, giving a slight whisper sound, and the phone rang. Simultaneously. What a time for a perfectly timed wake-up call.

Mister Big-and-Bad had as much strength as it looked. He snagged her about the waist, yanking her and her bedding onto the floor between the bed and wall. That hurt. A thump accompanied her hip hitting the floor, followed by her exclamation. He didn’t note it. All kinds of male moved as he reached up and swatted the phone off the nightstand. It landed near her head, sending off a bell tone. A pre-recorded message followed. He settled the handset back onto the phone stopping the noise. LeeAnn wasn’t paying much attention. The guy had as much mass as it looked. She was getting squashed. Things were actually going dim.

He sounded surprised. She shoved. He grunted and actually got heavier somehow.

His rifle made a slight sound as he set it beside her. He pushed up. And nothing had ever felt so sweet! LeeAnn sucked a solid lungful of air, let it out, and grabbed another.

Was he joking? She’d almost suffocated. Loud heartbeats filled her ears along with the sound of her own breathing. LeeAnn inhaled deeply, held the breath, and listened. Heard what sounded like little puffs of air. They were accompanied by smacking sounds as something hit the wall beside him.

“That is the sound of failure.”

LeeAnn rolled her head. There was a line of dark spots in the wall that hadn’t been there before. Her eyes were wide as she returned them to his face. Or what she could see of it.

“Those are bullet holes.”

“I just asked you not to say that.”

“Somebody wants you dead. I failed to stop them.”

“You ever been hunted?”

“Hunted? Are you crazy? I’m here to meet with—no. Chad might be laundering money, but—no. He wouldn’t hire someone to kill me! This kind of thing does not happen in real life. Okay? It just doesn’t.”

“We have about three minutes.”

“Before what? A room explosion?”

He lowered his chin. She had to imagine the look he was giving her. It was too dark to see in the well of space they occupied, and he was still hooded.

“You said you wanted to live.”

“Then, follow me. Do exactly as I say. Don’t argue. Don’t question.”

“No way. Do I really look that stupid? And I’ve got news for you, mister. I’m not leaving without my purse and ID.”

“Weren’t you listening? I never miss. This is new territory for me, too.”

“New territory? Okay. Enough is enough. Who
are
you? Exactly?”

LeeAnn would have laughed, except he was serious as he said it. And everything was just too weird at the moment. As if his occupation was a real possibility. That decided it. She was definitely dreaming.

“I thought guardian angels were old guys...with white beards...you know. Like skinny Santa’s. Or, they’re beautiful young women. Mostly blondes. And they have wings. Big ones. And...I don’t know. This is insane. They don’t even exist.”

“You ready to try the door?”

He might have sighed if the amount of breath touching her neck was an indicator.

“This could be dangerous, LeeAnn.”

“How...do you know my name?”  Her heart stuttered.

“Guardian angels can’t get through doors?”

She tried to say it without snickering, but failed. He lowered his chin more, dropping the hood farther, sending a shadow to his mouth. He didn’t look remotely angelic. His appearance was pretty damned sinister. And frightening. And he expected her to leave with him?

“Hotels keep their halls brightly lit. Your room is dark. You failed to shut your drapes last night. The moment the door opens, he’ll know it.”

His lips twitched. Her heart leapt. And that was just more weirdness.

“Won’t know until we try,” he finally replied.

“Give me one good reason why I should trust you. Just one.”

“I saved your life.”

LeeAnn reached over and ran her finger over one of the holes on the wall. It looked real. It sure felt real. This was starting to get scary.

He didn’t give her any time! And the bedding made it easy for him. LeeAnn found herself wrapped in wads of cloth and atop a shoulder, but at least she had a peephole for air. He acted like her bulk was nothing as he squatted at the side of her door.

“We’re going to be exposed for a few seconds. You ready?”

A whir of gear noise started up. He swiveled in a sickeningly quick motion. LeeAnn rocked atop his shoulder. Swallowed. A couple of moments later, the noise halted.

He opened the door and slid to the other side, shutting it behind him. She shifted as he resettled her, banging her legs against what was probably his rifle.

“You’re not going to let me take it?”

“Dead people don’t need phones, either,” he informed her and then he started jogging.