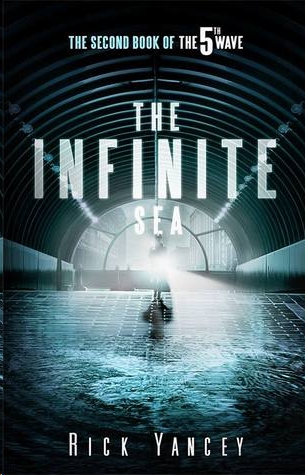 Summary: “Cassie Sullivan and her companions lived through the Others’ four waves of destruction. Now, with the human race nearly exterminated and the 5th Wave rolling across the landscape, they face a choice: brace for winter and hope for Evan Walker’s return, or set out in search of other survivors before the enemy closes in”—Provided by publisher.

I: THE PROBLEM OF RATS

VII: THE SUM OF ALL THINGS

For Sandy, guardian of the infinite

My bounty is as boundless as the sea,
My love as deep; the more I give to thee,
The more I have; for both are infinite.
—
William Shakespeare

THERE WOULD BE
no harvest.

The spring rains woke the dormant tillers, and bright green shoots sprang from the moist earth and rose like sleepers stretching after a long nap. As spring gave way to summer, the bright green stalks darkened, became tan, turned golden brown. The days grew long and hot. Thick towers of swirling black clouds brought rain, and the brown stems glistened in the perpetual twilight that dwelled beneath the canopy. The wheat rose and the ripening heads bent in the prairie wind, a rippling curtain, an endless, undulating sea that stretched to the horizon.

At harvesttime, there was no farmer to pluck a head from the stalk, rub the head between his callused hands, and blow the chaff from the grain. There was no reaper to chew the kernels or feel the delicate skin crack between his teeth. The farmer had died of the plague, and the remnants of his family had fled to the nearest town, where they, too, succumbed, adding their numbers to the billions who perished in the 3rd Wave. The old house built by the farmer’s grandfather was now a deserted island surrounded by an infinite sea of brown. The days grew short and the nights turned cool, and the wheat crackled in the dry wind.

The wheat had survived the hail and lightning of the summer storms, but luck could not deliver it from the cold. By the time the refugees took shelter in the old house, the wheat was dead, killed by the hard fist of a deep frost.

Five men and two women, strangers to one another on the eve of that final growing season, now bound by the unspoken promise that the least of them was greater than the sum of all of them.

The men rotated watches on the porch. During the day the cloudless sky was a polished, brilliant blue and the sun riding low on the horizon painted the dull brown of the wheat a shimmering gold. The nights did not come gently but seemed to slam down angrily upon the Earth, and starlight transformed the golden brown of the wheat to the color of polished silver.

The mechanized world had died. Earthquakes and tsunamis had obliterated the coasts. Plague had consumed billions.

And the men on the porch watched the wheat and wondered what might come next.

Early one afternoon, the man on watch saw the dead sea of grain parting and knew someone was coming, crashing through the wheat toward the old farmhouse. He called to the others inside, and one of the women came out and stood with him on the porch, and together they watched the tall stalks disappearing into the sea of brown as if the Earth itself were sucking them under. Whoever—or
whatever
—it was could not be seen above the surface of the wheat. The man stepped off the porch. He leveled his rifle at the wheat. He waited in the yard and the woman waited on the porch and the rest waited inside the house, pressing their faces against the windows, and no one spoke. They waited for the curtain of wheat to part.

When it did, a child emerged, and the stillness of the waiting was broken. The woman ran from the porch and shoved the barrel of the rifle down.
He’s just a baby. Would you shoot a child?
And the man’s face was twisted with indecision and the rage of everything ever taken for granted betrayed.
How do we know?
he demanded of the woman.
How can we be sure of anything anymore?
The child stumbled from the wheat and fell. The woman ran to him and scooped him up, pressing the boy’s filthy face against her breast, and the man with the gun stepped in front of her.
He’s freezing. We have to get him inside.
And the man felt a great pressure inside his chest. He was squeezed between what the world had been and what the world had become, who he was before and who he was now, and the cost of all the unspoken promises weighing on his heart.
He’s just a baby. Would you shoot a child?
The woman walked past him, up the steps, onto the porch, into the house, and the man bowed his head as if in prayer, then lifted his head as if in supplication. He waited a few minutes to see if anyone else emerged from the wheat, for it seemed incredible to him that a toddler might survive this long, alone and defenseless, with no one to protect him. How could such a thing be possible?

When he stepped inside the parlor of the old farmhouse, he saw the woman holding the child in her lap. She had wrapped a blanket around him and brought him water, little fingers slapped red by the cold wrapped around the cup, and the others had gathered in the room and no one spoke, but they stared at the child with dumbstruck wonder.
How could such a thing be?
The child whimpered. His eyes skittered from face to face, searching for the familiar, but they were strangers to him as they had been strangers to one another before the world ended. He whined that he was cold and said that his throat hurt. He had a bad owie in his throat.

The woman holding him prodded the child to open his mouth. She saw the inflamed tissue at the back of his mouth, but she did not see the hair-thin wire embedded near the opening of his throat. She could not see the wire or the tiny capsule connected to the wire’s end. She could not know, as she bent over the child to peer into his mouth, that the device inside the child was calibrated to detect the carbon dioxide in her breath.

Our breath the trigger.

Our child the weapon.

The wheat took longer. Nothing was left of the farmhouse or the outbuildings or the silo that in every other year had held the abundant harvest. But the dry, lithe stalks consumed by fire turned to ash, and at sunset, a stiff northerly wind swept over the prairie and lifted the ash into the sky and carried it hundreds of miles before the ash came down, a gray and black snow, to settle indifferently on barren ground.

Witch Is Why Time Stood Still (A Witch P.I. Mystery Book 13) by Adele Abbott
Circle of Stones by Suzanne Alyssa Andrew
Construct a Couple by Talli Roland
Three Dirty Secrets (Blindfold Club #4) by Nikki Sloane
Lovers and Reprisals (Lovers Series) by Turner, Lori
The Blood Diamond by John Creasey
A Widow Plagued by Allie Borne
Wait for Me in Vienna by May, Lana N.
Lifeforce by Colin Wilson
Verdict Unsafe by Jill McGown
Our partner