The Inn at Dead Man's Point 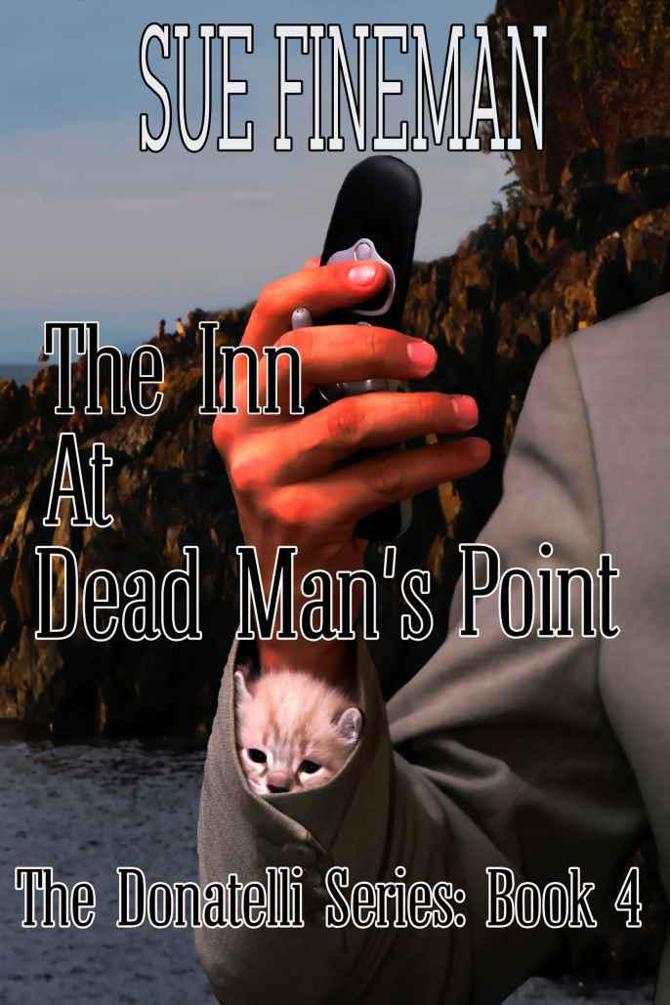 THE INN AT DEAD MAN’S POINT

The Inn at Dead Man’s Point

Alessandro Donatelli, the youngest of the Donatelli brood, has a promising career as an architect, but he needs a quiet place to work. He buys the run-down inn at Dead Man's Point from a ninety-year-old woman. She gives him a good price, but part of the deal is that he has to let her live out her life in the inn, the only home she’s ever known. He wants the inn, so he accepts the deal. How many more years could a woman that age live?

When the old woman breaks her arm, her great-niece comes to take care of her. Jenna Madison's parents supposedly bought into the inn before they died. Uncle Charlie said the inn would be hers someday, but she can’t find a record of her parents’ investment. And Al Donatelli claims
he
owns the inn.

Jenna and Al knew each other in high school, when he was a shy nerd and she was the class slut. One kiss is all it takes to forget the past and fuel their passion, but life at the inn isn’t easy. The old woman has other plans for the inn, and she doesn’t care who gets in her way.

T
he old woman stood at the edge of the hill, looking down at the rocks on the beach below where her husband of over sixty years had died five years ago. He’d been shaky and unsteady, and his mind wasn’t always clear, but that wasn’t the reason she’d pushed him over. He’d wanted to give
her
inn to his bastard daughter.

Mattie had left his body on the rocks long enough to be sure he was dead before she called 911. He’d gone out for a walk and disappeared, she’d told the woman on the phone. He was old and sick, and she was worried about him. It didn’t take them long to find his body. She’d called the girl then, as was expected, and they had a nice funeral service for Charlie. Nobody had suspected a thing, Mattie still had her inn, her home, and his bastard had returned to Seattle. Charlie’s hand-written will had curled and turned to ashes in the fireplace. The girl would never get her hands on this inn.

Mattie turned to walk back toward the inn, her home since the day she was born. The county wanted money for taxes, but she couldn’t find the money Charlie had hidden away, and she couldn’t pay the bill. If she didn’t sell it, they’d auction it off, and she’d end up in a nursing home, a place where old people went to die. And she wasn’t ready to die.

The young man who’d offered to buy the inn agreed to let Mattie live on the main floor of the inn for as long as she could take care of herself. She told him she’d think about it, but she was running out of time. The county auction was scheduled for the end of the month.

The wind picked up and howled through the trees and around the inn, chilling her to the bone. The sky darkened and the first big drops of rain splattered in the weedy grass around her. She hurried back to the inn to call the young man. Yes, she’d sell him the inn.

If she didn’t want to die in a nursing home, she had no choice.

“N
o, Brian, she’s not spending a week with you and your parents.”

“She’s my daughter, and I have a right to spend time with her.”

“Yes, you do, but not a whole week with your parents.” After a two-hour visit, Katie came home wheezing from Brian’s father’s cigar smoke. An entire week would put her four-year-old daughter in the hospital for sure, and Jenna no longer had health insurance. That went away with her job two months ago.

She wouldn’t mind letting Katie spend a week with Brian if he didn’t take her to his parents’ home, but he always did, and Katie always came home sick. Jenna hadn’t been able to convince Brian’s parents that Katie couldn’t handle the smoke. Brian’s mother talked so much she didn’t hear the wheezing, his father always blamed it on a cold, and Brian was oblivious.

Jenna glanced at the clock. “Brian, I have to go get Katie from pre-school.” She hung up and grabbed her purse. Before she could get out the door, the phone rang again.

She picked it up. “Is this Jenna Madison?” the woman asked.

“Miss Madison, this is Margaret Lofgren from Allenmore Hospital in Tacoma. I’m calling about Mattie Worthington.”

Her breath caught. “What about her?”

“She fell off a ladder and broke her arm. The doctor is reluctant to release her without someone at home to take care of her. He suggested a nursing home and she refused. She said to call you, that you’d take care of her.”

Fell off a ladder?
Aunt Mattie was ninety years old. What was she doing on a ladder? “How soon will she be released?”

“The doctor wants to keep her for a day or two, maybe longer. At her age, fractures can be quite serious, and she’d apparently been on the floor for at least two days before someone found her. She’s dehydrated and weak.”

Jenna took down all the pertinent information and ended the call. Poor Aunt Mattie. Bad enough to break something without lying on the floor for two days.

Her great aunt was a handful to deal with. Uncle Charlie had always been a sweetheart, but Aunt Mattie was outspoken, opinionated, and critical of others. Especially Jenna. When the inn was open, nobody wanted to work for her, and her surly attitude had often chased customers away.

The thought of taking care of her aunt gave Jenna a headache, but there was no one else. Aunt Mattie and Uncle Charlie had never had children of their own, but they took care of her after her parents died, so she couldn’t refuse to take care of her aunt now.

Jenna picked Katie up from pre-school, drove through McDonalds for a Happy Meal, and then headed to the hospital in Tacoma. Her aunt was zonked out on pain medication, so Jenna had a long talk with the nurse. Aunt Mattie had always been a robust woman, but now she looked thin and frail and very old. One side of her face was black and purple, and the white cast on her arm looked bigger than she was.

How long had it been since she’d seen Aunt Mattie? A year, two years, or three? Katie wasn’t walking yet, so it must have been over three years. They’d talked on the phone occasionally, and Jenna always got a lecture on morality. She’d tried to explain why she wouldn’t marry Katie’s father, but Aunt Mattie wouldn’t listen. To her, it wasn’t right for a woman to have a baby unless she was married.

“She’ll probably sleep for most of the afternoon,” said the nurse. “The bruise on her face isn’t as bad as it looks.”

Jenna took a deep breath. Was she prepared to take care of a ninety-year-old woman with a broken arm? Aunt Mattie wouldn’t be able to do much of anything until that cast came off. Feeding herself would be awkward, if not impossible, since she’d broken her right arm.

Better check out the inn. She hadn’t been there since Charlie’s funeral.

Jenna strapped Katie in her car seat and drove across the Tacoma Narrows Bridge toward Gig Harbor. Minutes later, she pulled off the main road at the faded sign for The Inn at Dead Man’s Point and drove down the single-lane drive under a dappled canopy of green. Uncle Charlie used to trim the trees back from the drive, but he’d been gone a long time.

Jenna stopped at the clearing at the top of the hill and gazed down at the big old house with the wrap-around porch, her home from the time her parents died until she left for college. The siding was streaked and dingy, and the patched roof was covered with moss. The inn had been neglected for so long she wanted to cry. The Japanese maple that she and Uncle Charlie had planted when she was twelve had gotten so big she could barely see the water beyond sparkling in the sunshine. The tree they’d planted in memory of her parents needed to be pruned and the flower beds torn out and replanted. It was mid-May, when the flowers should be blooming and the grass thick and green, but it looked like the weeds and moss and blackberry vines had taken over.

She drove down the winding drive to the front door, hoping the inside didn’t look as bad as the outside, yet knowing it must. There was a car parked in front. Unless Aunt Mattie had bought another car, someone was here. Jenna parked beside it. Katie was sleeping in her car seat, so Jenna rolled down all the windows and left her there. It was a cool day, so she should be all right for a few minutes.

Opening the front door of the inn, she called, “Hello.”

A man walked to the door. Tall, dark, and handsome barely touched it. This guy was gorgeous, but who was he and what was he doing here?

Al Donatelli?
Jenna didn’t mean to stare, but she couldn’t help it. His skinny frame had filled out, and he’d grown into a handsome man. A lifetime ago, they’d gone to high school together. Al was the class nerd, the quiet kid who’d never fit in. If only they could see him now. The thick black-framed glasses were gone and his dark hair was cut and styled just so. He wore tailored slacks and a tapered button-down shirt instead of the ill-fitting hand-me-downs he wore back then. If she’d met this guy in a bar or at a party, she’d definitely give him a second look. He oozed success and something she would never have thought possible.
Sex appeal.

He backed away from the door. “Come on in.”

She waved toward her car. “I left my daughter in the car.”

Beyond the Power of Your Subconscious Mind by Jensen, C. James
Angel in My Arms by Colleen Faulkner
Undercover Billionaire Boss: A BWWM Contemporary Romance by Mia Caldwell
Interzone Science Fiction and Fantasy Magazine #223 by TTA Press Authors
Five Ways 'Til Sunday by Delilah Devlin
Good In Bed by Jennifer Weiner
The Spiral Effect by James Gilmartin
Tyrant's Blood by Fiona McIntosh
Glory by Lori Copeland
Everland by Wendy Spinale
Our partner