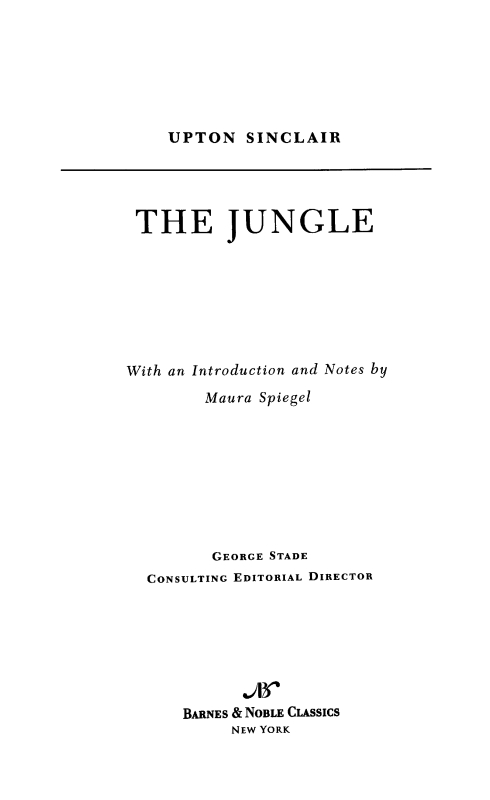 Table of Contents
FROM THE PAGES OF THE JUNGLE
Title Page
Copyright Page
UPTON SINCLAIR
THE WORLD OF UPTON SINCLAIR AND THE JUNGLE
Introduction
Dedication
ONE
TWO
THREE
FOUR
FIVE
SIX
SEVEN
EIGHT
NINE
TEN
ELEVEN
TWELVE
THIRTEEN
FOURTEEN
FIFTEEN
SIXTEEN
SEVENTEEN
EIGHTEEN
NINETEEN
TWENTY
TWENTY-ONE
TWENTY-TWO
TWENTY-THREE
TWENTY-FOUR
TWENTY-FIVE
TWENTY-SIX
TWENTY-SEVEN
TWENTY-EIGHT
TWENTY-NINE
THIRTY
THIRTY-ONE
ENDNOTES
INSPIRED BY THE JUNGLE
COMMENTS & QUESTIONS
FOR FURTHER READING
FROM THE PAGES OF
THE JUNGLE
Chicago and its saloons and its slums fade away—there are green meadows and sunlit rivers, mighty forests and snow-clad hills. They behold home landscapes and childhood scenes returning; old loves and friendships begin to waken, old joys and griefs to laugh and weep.
(page 10)
“I will work harder.” That was always what Jurgis said.
(page 21)
The new hands were here by the thousands. All day long the gates of the packing-houses were besieged by starving and penniless men; they came, literally, by the thousands every single morning, fighting with each other for a chance for life.
(page 83)
The people of Chicago saw the government inspectors in Packingtown, and they all took that to mean that they were protected from diseased meat; they did not understand that these hundred and sixty-three inspectors had been appointed at the request of the packers, and that they were paid by the United States government to certify that all the diseased meat was kept in the state.
(page 101)
On election day all these powers of vice and crime were one power; they could tell within one per cent what the vote of their district would be, and they could change it at an hour’s notice.
(page 262)
All day long the blazing midsummer sun beat down upon that square mile of abominations: upon tens of thousands of cattle crowded into pens whose wooden floors stank and steamed contagion; upon bare, blistering, cinder-strewn railroad-tracks, and huge blocks of dingy meat-factories, whose labyrinthine passages defied a breath of fresh air to penetrate them; and there were not merely rivers of hot blood, and car-loads of moist flesh, and rendering-vats and soap-caldrons, glue-factories and fertilizer tanks, that smelt like the craters of hell—there were also tons of garbage festering in the sun, and the greasy laundry of the workers hung out to dry, and dining-rooms littered with food and black with flies, and toilet-rooms that were open sewers.
(page 284)
He would find it everywhere the same; it was the incarnation of blind and insensate Greed. It was a monster devouring with a thousand mouths, trampling with a thousand hoofs; it was the Great Butcher—it was the spirit of Capitalism made flesh.
(page 326)
“It is the Railroad Trust that runs your state government, wherever you live, and that runs the United States Senate.”
(page 333)
“Organize! Organize! Organize!”
(page 356) 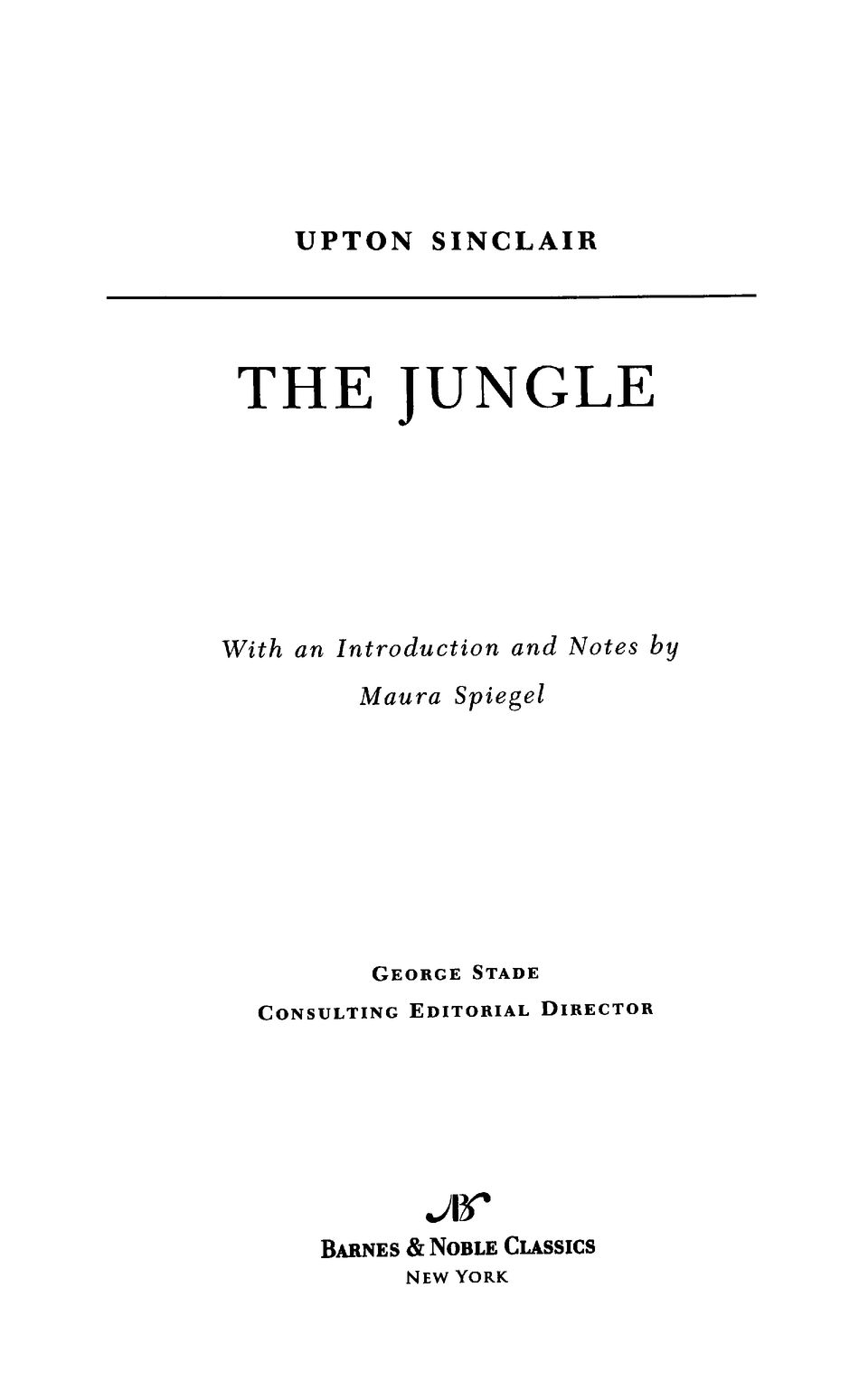 Published by Barnes & Noble Books
122 Fifth Avenue
New York, NY 10011
www.barnesandnoble.com/classics
The Jungle
was first published in 1906.
Originally published in mass market format in 2003 by Barnes & Noble
Classics with new Introduction, Notes, Biography, Chronology, Inspired By,
Comments & Questions, and For Further Reading.
This trade paperback editon published in 2005.
Introduction, Notes, and For Further Reading
Copyright © 2003 by Maura Spiegel.
Note on Upton Sinclair, The World of Upton Sinclair and
The Jungle,
Inspired by
The Jungle,
and Comments & Questions
Copyright © 2003 by Barnes & Noble, Inc.
All rights reserved. No part of this publication may be reproduced or
transmitted in any form or by any means, electronic or mechanical, including
photocopy, recording, or any information storage and retrieval system,
without the prior written permission of the publisher.
The Jungle
ISBN-13: 978-1-59308-118-8 ISBN-10: 1-59308-118-9
eISBN : 978-1-411-43387-8
LC Control Number 2004115321
Produced and published in conjunction with:
Fine Creative Media, Inc.
322 Eighth Avenue
New York, NY 10001
Michael J. Fine, President and Publisher
Printed in the United States of America
QM
7 9 10 8 6
UPTON SINCLAIR
ON SEPTEMBER 20, 1878, Upton Beall Sinclair, Jr., was born in Baltimore, Maryland, to socially prominent but financially strained parents. His thinking on social and economic issues began to be shaped at a very early age, when he perceived the striking disparity between his parents’ restricted lifestyle and that of his wealthy grandparents. Sinclair’s parents, Upton Sr. and Priscilla, were devout Episcopalians who regularly attended church with their young son. Based on a doctor’s misguided diagnosis that Upton’s mind was “outgrowing [his] body,” his parents deferred his formal education until he was ten years old. He then completed the work of eight grade levels in less than two years and at age thirteen passed the entrance exam to the College of the City of New York.
Sinclair sold short vignettes, humor, and “half-dime” novels to finance five years at City College and graduate studies in literature and philosophy at Columbia University. In 1900 he married Meta Fuller, and their son, David, was born in 1901; the couple divorced in 1912. Sinclair married twice more.
In the early 1900s Upton Sinclair came into his own as a socialist thinker. Beginning with his contact with the editor of
Appeal
to
Reason,
the most influential socialist journal of its time, he met numerous figures who influenced his development from idealistic poet to social progressive. Sinclair was a significant presence within early socialist groups in America: In 1905 he cofounded the Intercollegiate Socialist Society with Jack London, Florence Kelley, and Clarence Darrow; in 1906 he established a socialist community, the Helicon Home Colony, in Englewood, New Jersey.
In 1906 the publication of
The Jungle
fueled a storm of debate on food sanitation laws and “wage slavery.” Sinclair subsequently won global celebrity for his exposures of social injustice—other novels concerned inequities and exploitation in the judicial system, in religion, in the oil, steel, and automobile industries—and he subscribed to the more radical ideologies of his time. His work is identified with that of the writers Theodore Roosevelt dubbed “muckrakers.” In all, he published more than ninety books and pamphlets and countless articles.
Sinclair’s End Poverty in California plan, under which he campaigned (unsuccessfully) for California governor in 1934, helped bring about substantial changes in the political and social climate of the United States, including passage in 1906 of the Meat Inspection Act and the federal Food and Drug Act, as well as more equitable tax laws under President Franklin D. Roosevelt. His novel on the rise of Nazism,
Dragon’s Teeth,
won the Pulitzer Prize in 1943.
Upton Sinclair died on November 25, 1968, in a nursing home in New Jersey. He is remembered not only as a prolific writer but as a significant contributor to American social thought.
THE WORLD OF UPTON SINCLAIR AND THE JUNGLE