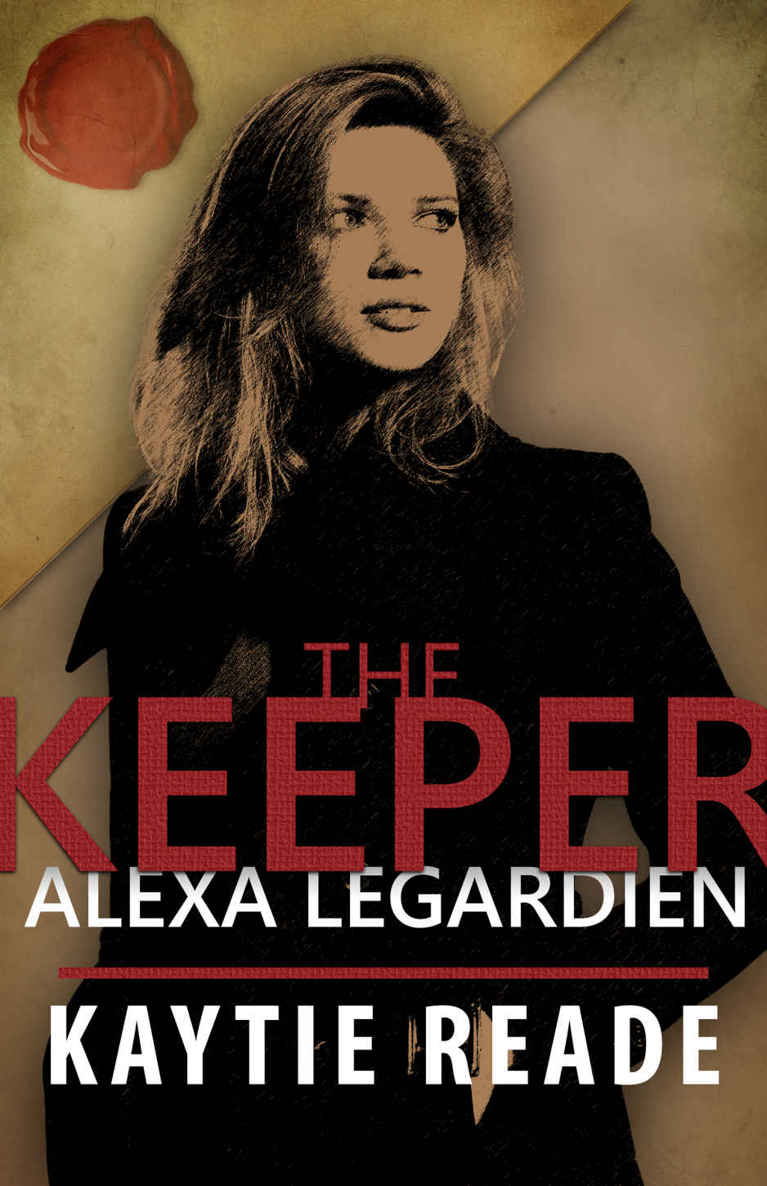 Character names, places, and situations in this book are purely fictional or used in a fictional manner. Any similarities with real life are purely coincidental and not done intentionally by the author.

Next for
The Keeper

This was originally published in shorter episodes/parts, but has now been re-released in two bundles as
The Keeper: Alexa LeGardien
and
The Keeper: Ruins in Italy
(coming soon) There are slight variations (like in chapter transitions within Parts), but the main story remains unchanged.

A
LEXA
peered down at the papers that were laid in front of her. She twirled a pen between her right index finger and her thumb, and drummed her left fingers on the desk in front of her.
The time has finally come
, she thought.

“Having second thoughts?” The lady behind the desk asked. She wore glasses and had a welcoming smile that Alexa could care less about. Her blonde hair was pinned to a perfect bun. She was new and more preferable to the former receptionist, but that didn’t make Alexa any more willing to wait any longer in order get to know her.

“Not even if the world caught on fire. I couldn’t be happier.” Alexa put on her widest and fakest smile. It was a good day. It just wasn’t one to make her happy. She read the first line which was printed in bold one more time with as little anticipation as possible ‘Evacuation from Foster Care Correctional Center’.
At least it’s not juvie
, she thought. Although it didn’t show, she was more than glad to be out. She had waited this long to get out, but it didn’t make her any less burdened. She scanned her eyes down the page to the very bottom where a dotted line was placed. One last thing to worry about, she kept thinking to herself. ‘Happy birthday to me.’

“Okay, so just sign right there and you’re free to go,” said the lady behind the desk.

Alexa quickly drew her signature. “It’s been my pleasure.” She spoke contemptuously.

“So, eighteen, huh?” The woman asked as a fake attempt of a real conversation.

That’s what the paper says
, she thought, but didn’t answer. She replied with a raised brow and a stiff smile. Best not to bait the shark.

The woman keyed in some letters on a desktop that was placed just by the front of her face. “So, I just need to put that information in the system. I’ll get your belongings, and you should be good to go.” After typing a few more words that Alexa couldn’t make out, she pushed the enter button on the keyboard. “There.” She stretched her hand to the locker behind her and pried. It opened with ease. She pulled out an envelope which Alexa immediately noticed had been sealed with an old fashioned wax stamp. “Alexa LeGardien.” She emphasised both words while still holding on to the envelope.

“I don’t have a last name.” Of course she knew she had a last name, she just wasn’t in the mood to hear it.

“Not according to your legal documents. Anyway, this came for you just this morning. No return address.
Mysterious
.” Mrs. Secretary Sunshine seemed more interested in what lay within it that Alexa herself.

“Whatever,” Alexa responded ungratefully.
To hell with manners
. She snatched the envelope from the woman’s grip and looked around it curiously. She rubbed her thumb around the wax stamp, which glowed as red as fresh blood. Stamp made of wax . . . Was that something people still did? Her ride was going to be here anytime soon. He’d promised.

She had no outside friends other than her one best friend, Matt, who did everything but send her strange unsigned envelopes. So that ruled him out. She really couldn’t think of anyone else in the outside world who’d be willing to send her a package—no matter how small. So, the question of just exactly who could have sent the envelope spun around her head. But she didn’t want to open it. Not just yet, anyway. She read the line on the front one more time
‘To Alexa LeGardien’
.

“Is that all?” She asked in the hopes that she would not spend another second in that house. It held nothing but depressing memories for Alexa, and she couldn’t wait to get the stench out of her system.

The woman took a look at the small locker one more time. “I guess so. Good luck with whatever your next step is.” She seemed genuine in her statement, making Alexa really wished she’d woken up in the right side of the bed today.

She swung the two main doors wide open, and felt the fresh air and the rays of the bright sun hit her body. Somehow, knowing that she was never going to return to this facility made her much happier. This is what freedom tastes like.

“I can’t believe my eyes.” She shrieked as her eyes fell on Matt who was leaning on a brand new red 1970 Mustang with two black stripes running along the center of it.

Matt leaned by the passenger door of the brand new looking mustang. “Six inches of steel, babe. Only the best on your eighteenth birthday.”

“Only six inches?” she raised an eyebrow in humour. “Just for me?” she said jokingly.

She spread her hands out in front of the red mustang and hugged it as much as she could. “You’re not rich at all, period. How on Earth did you get this?” She tapped the hood of his car.

Matt spread his arms out expecting a hug from Alexa. When none came, he asked, “What? No hug for me?” Alexa quickly wrapped her arms around him. Still within her grip, he said, “As for where I got it... Can’t tell you. It’s a secret.” Then he let go of her. “Speaking of secrets, what’s that you’re holding?” he looked at the cream colored envelope and also noticed the red wax stamp on its front.

“An envelope,” she replied, stating the obvious.

“Yeah, I can see that. Who from? And what does it say? Just by looking at it, I’ve diffuse that it’s from a long lost relative who just recently found you and happens to be filthy rich.”

“Well, I’ve diffused that it’s a case of mistaken identity.” She stretched the letter towards him. “Shall you do the honours?”

“Normally, I would love to, but I really think that you should do it.”

After a brief moment of hesitation, Alexa picked up the envelope again and propped it open. Inside, was what appeared to be a neatly folded letter and a key. A small strange key. “Weird.”

“Read it.” By then, Matt’s face was right by hers, awaiting the mystery of the letter.

He took the piece of paper from her hand and straightened it. “It’s handwritten,” he noted. “To Alexa LeGardien, my beautiful daughter on your eighteenth birthday. I hoped this wouldn’t come to pass. Your journey begins now. Love, mom.” He stopped reading. “That’s it.”

“Stop looking at me like that. It’s obviously
not
from my mother. She died giving birth to me, you know that. That’s all that’s written? Talk about vague.”

Matt’s eyes saddened when he looked at Alexa. “You sure?”

“Yes, I’m sure! This is a sick joke from a very sick person. That’s all. There’s no deeper meaning to it.”

Alexa took it from his hands and re-read it. “I wonder what that’s meant to mean. And I wonder what this key unlocks.” She twirled it between her fingers for a while and then brought the key closer to her sight. It was much smaller than your average key and had a letter followed by two digits inched at one side of it. It read ‘S37’ to be exact. “We find the lock, we find the idiot.”

“Like you said, I also wonder what it unlocks.”

Matt cocked his left eyebrow and looked at her knowingly. She looked back at him, almost as if they were having a back-to-back conversation in their minds. He looked at her in a ‘you-know-what-we-have-to-do’ – Yeah – We have to find out exactly what it opens.

M
ATT
was sitting in his apartment with his laptop right in front of him. “S-37. Does that mean anything to you?” he looked up at Alexa, hoping her past answers of
no
, would suddenly change to
yes
or
maybe
.

Alexa dropped the key on the table before her. “For the very last time, no. I wish the writer of this letter would have been a little more specific.”

“I’ll keep looking.” He returned his hands to the keyboard. “So, just how much did you miss the outside world?”

Alexa took a look around the messy apartment. Nothing was in its place, clothes had been spread all over the floor randomly. “Ah, New York, New York.” She acted out in a dramatic way. “No offence, dude, but you need a new place. This apartment is...just not doing it for me.” She flung a stale banana peel in the nearby trash which itself was filled to the brim.

“Found something. There’s a chance our strange key is a safety deposit box key.”

Alexa rushed to his side and peered at his laptop screen. “That’s great. What bank?”

“You don’t know what bank?”

She slouched on his couch which was not the only thing that looked dead in his apartment, and that was saying a lot. “Hope your girlfriend’s not popping in anytime soon.” She grabbed a pack of Skittles and burst it open.

“Christina and I broke up,” he stated openly. He kept his eyes glued to his screen.

“Wish I could pretend to be sorry. She was a bitch.”

“You never even met her.”

She threw a couple of skittles and caught them in her mouth. “Didn’t have to. I’m about to throw a tantrum if we don’t find anything about the mysterious key soon.”

“So, Resimant bank which is just a couple blocks away from here is the closet bank with safety deposit boxes. Hopefully they can tell us what we need to know.”

Alexa quickly wore her backpack. “Great! What are we waiting for? Let’s go.”

He slammed his laptop shut and got up. “Okay then.”

“L
ET
me handle this, okay?” Matt said as they both approached the entrance to the bank.

Alexa raised her arms in a fake surrender, “Fine, I’ll just have a seat.”

He left her side and met up with a man who Alexa guessed worked in the bank. “Hi, I’m wondering where I can get information about a key to a safety deposit box.”

The worker who wore a much more expensive suit than he could afford and looked overly cocky to Alexa’s dismay refused Matt any help. He didn’t look like he was willing to give a random stranger any information whatsoever. His name tag which was placed on his left breast pocket read ‘John Kingslow’.

“I’m sorry, sir, we can’t disclose sensitive information out to . . . strangers.” No doubt, he had taken a one second look at Matt and Alexa and made his stereotypical assumptions.

But Matt wasn’t willing to go down without so much as a little hint. “There must be something you can do. We just want to know what box it opens.”

Alexa could spot John shake his head, denying any more aid to Matt from where she sat. She approached them both.

“Hi, John Kingslow, is it?” She asked, reading his name tag one more time to be sure. “It’s actually my key. I just wanted to know what it opens. Please.”

He shook his head once more. “I’m sorry, but all I can disclose is that it’s not from this bank.”

“Can you tell us what bank it’s from then?” Alexa asked. She wasn’t backing down anytime soon.