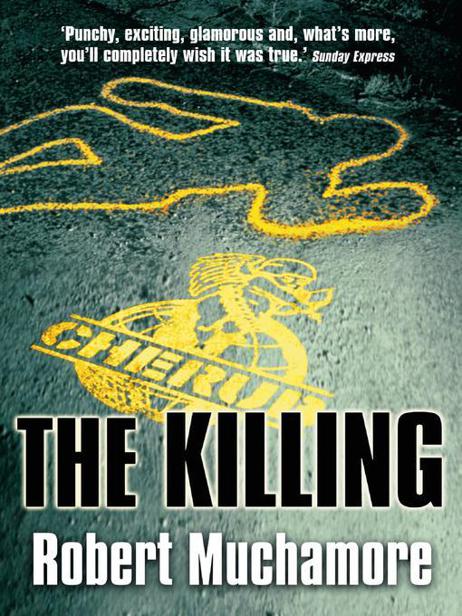 Robert Muchamore
was born in 1972 and spent thirteen years working as a private investigator.

is his fourth novel in the series.

The CHERUB series has won numerous awards, including the 2005 Red House Children’s Book Award. For more information on Robert and his work, visit

Praise for the CHERUB series:

‘If you can’t bear to read another story about elves, princesses or spoiled rich kids who never go to the toilet, try this. You won’t regret it.’

in one sitting, then went out the next day and got the sequel.’ Sophie Smiley, teacher and children’s author

‘CHERUB is the first book I ever read cover to cover. It was amazing.’ Scott, age 13

‘CHERUB is a must for Alex Rider lovers.’ Travis, age 14

First published in Great Britain in 2005

This eBook edition published in 2012

The right of Robert Muchamore to be identified as the Author of the Work has been asserted by him in accordance with the Copyright, Designs and Patents Act 1988.

All rights reserved. Apart from any use permitted under UK copyright law, this publication may only be reproduced, stored or transmitted, in any form, or by any means with prior permission in writing from the publishers or in the case of reprographic production in accordance with the terms of licences issued by the Copyright Licensing Agency and may not be otherwise circulated in any form of binding or cover other than that in which it is published and without a similar condition being imposed on the subsequent purchaser.

A Division of Hachette Children’s Books

THE KILLING
ROBERT MUCHAMORE
WHAT IS CHERUB?

CHERUB is a branch of British Intelligence. Its agents are aged between ten and seventeen years. Cherubs are mainly orphans who have been taken out of care homes and trained to work undercover. They live on CHERUB campus, a secret facility hidden in the English countryside.

WHAT USE ARE KIDS?

Quite a lot. Nobody realises kids do undercover missions, which means they can get away with all kinds of stuff that adults can’t.

Amongst James’ closest friends on campus are BRUCE NORRIS, GABRIELLE O’BRIEN, SHAKEEL DAJANI and the twins CALLUM and CONNOR REILLY. His best friend is KYLE BLUEMAN, who is fifteen.

Cherubs are ranked according to the colour of the T-shirts they wear on campus. ORANGE is for visitors. RED is for kids who live on CHERUB campus, but are too young to qualify as agents. BLUE is for kids undergoing CHERUB’s tough 100-day basic training regime. A GREY T-shirt means you’re qualified for missions. NAVY – the T-shirt James wears – is a reward for outstanding performance on a single mission. If you do well, you’ll end your CHERUB career wearing a BLACK T-shirt, the ultimate recognition for outstanding achievement over a number of missions. When you retire, you get the WHITE T-shirt, which is also worn by staff.

The two thirteen-year-olds wore nylon shorts, sleeveless tops and flip-flops. Jane leaned against the concrete wall of the housing block where she lived, peeling away strands of hair stuck to her sweaty face. Hannah was sprawled over the paved steps a couple of metres in front of her.

The words were meaningless, but Hannah understood. It was the middle of the summer holidays and the hottest day of the year so far. The two best friends were broke, irritated by the heat and weary of each other’s company.

‘Makes me sweat just looking at ’em,’ Hannah said, staring at the pre-teen boys kicking a football around a tarmac pitch less than twenty metres away.

‘We used to run around like that,’ Jane said. ‘Not football. I mean, racing our bikes and stuff.’

Hannah allowed herself to smile as her brain drifted into the past. ‘Barbie bike grand prix,’ she nodded, remembering herself on a little pink bike; the white spokes blurring as she juddered over the gaps between paving slabs. Jane’s
nan
always sat out in a deck chair keeping an eye on them.

‘You and me had to have everything the exact same,’ Jane nodded, as she curled her toes, making her sandal clap against her foot.

The voyage down memory lane was rudely interrupted by a football. It skimmed Hannah’s hair and stung the wall behind her, missing Jane by centimetres.

She dived forward, wrapping her body over the ball as it bobbled down the steps alongside her. A boy ran up to the bottom of the staircase. Nine years old, with a Chelsea shirt tied around his waist, he displayed a rack of skinny ribs every time he breathed out.

‘Give us,’ the kid panted, putting out his hands to catch.

‘You nearly whacked me in the face,’ Jane yelled furiously. ‘You might at least say sorry.’

The other lads who’d been playing football were closing in, irritated by the break in play. Hannah appreciated that the kick was an accident and she’d been set to give the ball back until one of the kids gave her lip. He was the biggest lad there, ten years old with cropped red hair.

Hannah barged between a couple of sweaty torsos and faced the redhead, squeezing the football between her palms. ‘You
wanna
repeat that, Ginger?’

Hannah was three years older than the kid she was facing off, with height and weight on her side. All Ginger could do was stare dumbly at his Nikes, while his mates waited for him to come out with something clever.

‘Cat got your tongue?’ Hannah glowered; enjoying the way Ginger was squirming.

‘I just want our ball,’ he said weakly.

Hannah let the ball drop and booted it before it hit the ground. It would have been OK in trainers, but as the ball soared towards the goalposts on the opposite side of the pitch, her sandal flew after it.

Ginger quickly backed up and picked the sandal out of the air. Enjoying his newfound power, he smirked as he held the sandal up to his nose and took a sniff.

Hannah made a grab for her sandal as the young footballers jeered. Ginger ducked out of the way, before throwing the shoe underarm to one of his mates. Lumps of gravel dug into Hannah’s sole as she stepped unevenly towards her new tormentor. She felt like a total
wally
for letting this gang of runts get one over on her.

‘Give us that shoe or I’m gonna batter you,’ she snarled.

The shoe changed hands again, as Jane stepped into the fray to help her mate. ‘Give it back,’ she steamed.

The angrier the girls got, the harder the boys laughed. They were spreading out, anticipating an extended game of piggy in the middle, when Jane noticed changing expressions on the young faces.

Hannah sensed something was wrong too. She turned sharply, catching a fast-moving object out the corner of her eye a second before it smashed into the ground. It hit the staircase in the exact spot where she’d been sitting a minute earlier.

Hannah froze in shock as the metal banister crumpled. By the time her brain got up to speed, the terrified young footballers had abandoned her sandal and were shooting off in all directions. She found her eyes focused on the well-worn tread of a boy’s trainer. His denim-clad bum poked out of the crumpled metal and dust. The adrenalin hit hard as Hannah recognised the mangled body and screamed out.

He looked dead, but this couldn’t be for real. She covered her face with her hands and screamed so hard she felt her tonsils dance in the back of her throat. She tried to tell herself it was all a dream. Stuff like this didn’t happen in real life. She’d wake up in a minute and everything would be back to normal …

For the past three years George Stein has worked as an economics teacher at the exclusive Trinity Day school near Cambridge. Recently, information has come to light suggesting that Stein may have links with the environmental terrorist group Help Earth. (Excerpt from CHERUB mission briefing for
Callum
Reilly and
Shakeel
‘
Shak
’
Dajani
.)