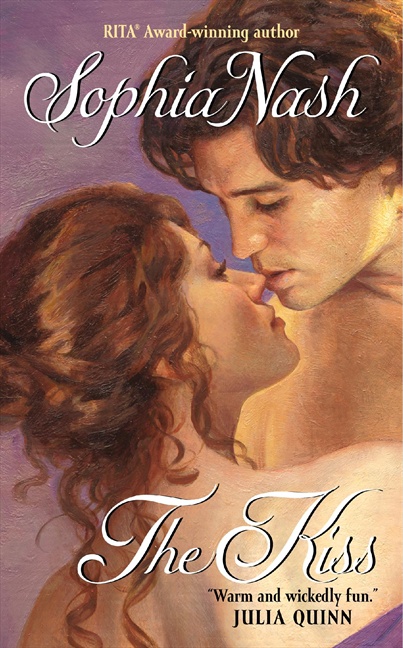 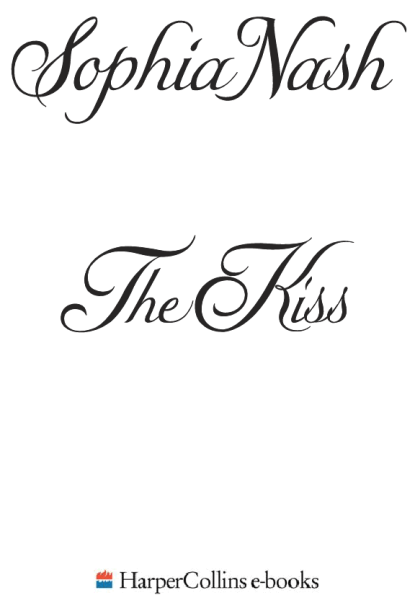 "Moderation," Georgiana Wilde breathlessly cautioned her husband of several hours, "is the key to happiness."

The Marquis of Ellesmere's deep baritone chuckle filled the vast, elegantly appointed bedchamber that had served twelve generations of Fortesques very well. "Yes, but my dear, there are times when excess has its merits. And I do believe"—with a wolfish look Anthony swallowed the last of the brandy in his glass—"wedding nights fall into that category."

He turned her around like a recalcitrant child. "You'll have to stop gripping your arms if I'm to get this gown off you," he murmured, then nuzzled her neck.

Georgiana's insides roiled, yet she immediately released her elbows and stifled the urge to squirm under Anthony's tickling breath. This was every bit as embarrassing as she had imagined it would be. He was working the buttons at the back of her gown and she was precisely eight pieces of clothing away from utter embarrassment—one gown, one corset, one shift, two shoes, two stock—

Without warning her gown whooshed over her head and a button snagged her hair. "Ow!"

"Honestly, you didn't really expect me to undress in front of your mother's maid of forty years, did you?"

"Mmmm..." He had his face buried in her hair and she felt his fingers searching for pins.

"Why, when you asked for congratulations, Harris's lips became more pursed than the time you bit into an unripe persimmon." Now she was babbling and her voice sounded high and unnatural, even to her own ears. She was certain normal women did not bring up fruit on their wedding night.

She shivered but resisted the urge to wrap her arms about her shift-clad body again. Surely there was not one Ellesmere marchioness in the illustrious family tree who had had such a plain and frayed garment. And her serviceable corset with the yellowed whalebone sticking out... Well, Anthony had known what he was getting when he persisted in this ridiculous—

"Stay still." Anthony's arm snaked around her waist and he lifted her to stand in front of the bedpost. She grasped the finely turned rosewood and exhaled as her new husband—she still couldn't believe she had gone through with it—stroked a finger from her nape to the top of her corset. "You're not turning missish, are you? Most ladies of eight and twenty are over that sort of thing."

"Nervous?" he filled in, his lips nipping her earlobe. "I hope your mother hasn't been filling your head with nonsense about duty and pain."

"No, she only suggested the
rack
would give more pleasure." She felt his lips curl on her neck. "But I am to concentrate on the majesty of the Fortesque jewels."

Humor crawled into his voice. "Your mother is interested in the family jewels, is she?" He threw back his head and laughed before gathering her to his barrel-shaped chest. "You may tell her they were much
larger
than you expected."

"Well, if all else fails, I'm to put my mind to good use by planning my future role."

"As if you needed any inducement to make more of those confounded lists of yours." He slowly spun her around and wrapped his arms about her before lifting her to her toes and planting all-consuming kisses on her eyes, her nose, and finally her lips. She inhaled sharply and registered the smoky scent of his neck cloth. It was the sickly sweet aroma she had recently learned was the favored amusement of jaded gentlemen and worldly ladies ...
opium.

"Now, there'll be no more nonsense about duty and torture." His fingers skimmed the top edges of her corset and shift, searching and finding the little bow. "But since you're so fond of plans, let me tell you what I plan to do to you. No, I see that look in your eye. I've spent
years and years
thinking about this night, and now I'll have the pleasure of telling you all about it, since we're properly married and you no longer have to pretend to be shocked."

Her nerves almost deserted her when the familiar dangerous glint appeared in his darkening eyes.

A short, piercing shriek echoed from the corridor on the other side of the locked bedchamber door. The unmistakable high-pitched voices of Anthony's mother, sisters, and Mrs. Harris whistled through the room's cracks.

"You're entirely mistaken, Harris," his mother's voice echoed. "Anthony gave me his word he wouldn't marry without my approval. He's merely enticed by that loose-moraled, scheming—"

"Not Granny's," moaned a voice that sounded a lot like his younger sister's.

Harris never could hide her cockney roots when she was in a snit, thought Georgiana.

"Anthony," she whispered. "You said you'd informed your mother, and furthermore, she'd be away another three days. Oh, this is unbearable. What are we to do?"

"And I suppose when you say
we
you really mean
me,
if past history is any indication."

"You don't really expect
me
to go out there, do you?" That was the thing about Tony. You never could really be sure.

"Well, if you just stick your hand out the door and show them the bloody ring, that'll quiet 'em right up. And then we can go straight back to my plans." His eyes were twinkling, but the odd look in the rest of his expression couldn't mask his concern. Facing judgement had never been one of Anthony's preferred activities. Beating a hasty retreat until everything boiled over was much more his style.

Anthony tugged at his neck cloth. "Oh, all right."

The rattle of the door handle rended the air. Georgiana grabbed her rumpled gown and threw it over her head, praying for something, anything, other than this awkward moment. "I'm not sure I'll forgive you for this—at least not in this century."

"My dear, cover your ears. Consider it my first husbandly order." He winked. "I think I could get used to that part of the vows." Hopping on one leg, he put on his breeches quickly and stuffed in the edges of his long linen shirt. His familiar lopsided smile worked far better than any wicked wink at tugging at her heart. She dutifully covered her ears upon hearing an explosion of very unladylike language on the other side of the door.

She loved the big imbecile, no matter how much she was tempted to wring his neck at times. It had been the way of things since they were three years old. Their nannies had been sisters from the village and had used every opportunity to join forces in attempting to corral their exuberant charges. Why, Tony's antics and hair-raising schemes to avoid his long-suffering string of tutors during adolescence were legendary.

And his actions as a man? Well, after one and a half very poorly executed years at Oxford, which were said to have been the cause of his father's apoplexy and early demise, ten mysterious years had followed in London. Georgiana knew there were some who whispered he was a thoroughly debauched, dissipated rake without a shred of a conscience or a lick of common sense. And they were right.

There was also a heart of gold half buried under those years of depravity, and also years of guilt. It was why she was willing to help him find his way back to a productive way of life.

And she'd do it because he was her best friend. Well...

A man who loved her.

A loud crash intruded on her thoughts. She cautiously lifted her hands from her ears and realized Tony and his mother had boxed themselves up in the marchioness's rooms adjacent to this suite. The very rooms from which Lady Ellesmere would be forced to remove in order to give way to Georgiana. God preserve her.

"Anthony Edward Lawrence Fortesque, she is a—a—a
peasant.
No, worse than that. She's the
deformed spawn of a nobody.
I will not share a house with that upstart—that conniving daughter of our
steward.
Think what your father would have said! Why, you must have this ridiculous union annulled right away. We shall call on our solicitor in town, and thank God I found this out in time before you consu—"