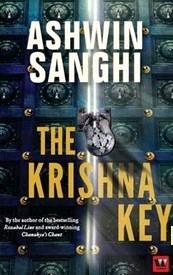 Ashwin Sanghi’s first novel,
The Rozabal Line
, was self-published in 2007 under his pseudonym, Shawn Haigins. The theological thriller based upon the theory that Jesus died in Kashmir was subsequently published by Westland in 2008 in India under his own name and went on to become a bestseller, remaining on national bestseller lists for several months.

Ashwin Sanghi’s second novel
, Chanakya's Chant
, a political thriller with roots in ancient Mauryan history, shot to the top of almost every bestseller list in India within a few weeks of its launch. The novel went on to win the Crossword-Vodafone Popular Choice Award 2010, and film producer UTV acquired the movie rights to the book. The novel continues to dominate the fiction charts.

The Krishna Key
, Ashwin’s third novel, is a furiously paced and riveting thriller that explores the ancient secrets of the Vedic age and the
Mahabharata
.

Ashwin is an entrepreneur by profession but writing historical fiction in the thriller genre is his passion and hobby. Ashwin was educated at the Cathedral & John Connon School, Mumbai, and St Xavier’s College, Mumbai. He holds a masters degree from Yale and is working towards a Ph.D. in Creative Writing. Ashwin lives in Mumbai with his wife, Anushika, and his son, Raghuvir.

To connect with Ashwin on email or social media please visit his website at
www.sanghi.in.

This book is sold subject to the condition that it shall not by way of trade or otherwise, be lent, resold, hired out, circulated, and no reproduction in any form, in whole or in part (except for brief quotations in critical articles or reviews) may be made without written permission

I am obliged to my wife Anushika and my son Raghuvir, who ungrudgingly tolerated my persistent absence from their lives while I was writing this book. They are my inspiration, my life and my very breath.

I am beholden to my parents, Mahendra and Manju, who supported me in all my endeavours, including my writing. Also, many thanks to my brother and sister, Vaibhav and Vidhi, who picked up the slack, at work, and at home, while I was working on this project.

My aunt, Aparna Gupta, is my eternal friend and guide, but has never hesitated to critique my work. I am thankful to her for playing the role of sounding-board while this novel was a work in progress.

I am grateful to my editor, Prita Maitra, and my publisher, Gautam Padmanabhan, without whom none of my novels, including this one, would have emerged from their manuscripts. In addition, I am thankful to Paul Vinay Kumar, Renuka Chatterjee, Anushree Banerjee and Satish Sundaram at Westland who have always supported me wholeheartedly.

Gunjan Ahlawat and Kunal Kundu deserve special mention for the beautiful cover design as also Vipin Vijay for putting it all together. My thanks to Rupesh Talaskar for the illustrations inside the pages of this novel. My gratitude, also, to Vishwajeet Sapan for the key Sanskrit translations.

I am thankful to various authors and producers of original or derived works. A separate acknowledgements section at the end of the narrative lists these in detail.

Finally, I am deeply aware of the fact that when I sit down to write, the words that flow from mind to matter are merely
through
me, not
from
me. How do I convey my thanks to the real writer—the formless, shapeless and endless Almighty—for his blessings?

Perhaps this book will analisto-reg;" a

I was present in Drupada’s court the day Draupadi’s Swayamvara was held. I was also there when Arjuna returned to his mother and told her that he had won a grand prize and asked for her advice on what he should do with it. ‘Whatever it is, you must share it equally with your brothers,’ Kunti commanded. Hence, Draupadi ended up wedded to all five brothers in an instance of polyandry. I felt that this was the appropriate time to introduce myself to my aunt. I fell at Kunti’s feet and said, ‘I am your nephew, Krishna. I am your brother Vasudeva’s son, and your sons are my cousins. It shall be my duty to protect them and Draupadi!’

The road from Jodhpur to Chandigarh was an almost perfect south-north route that would take them via Jhajjar, Rohtak, Panipat and Ambala to Chandigarh. Having stopped at a gas station for a quick top-up of the fuel tank, they headed out to State Highway 22 that would eventually bring them to National Highway 71.

A short distance from where the State Highway started, they saw a police check post blocking traffic. All vehicles were being stopped and checked. ‘Stop the car,’ hissed Saini to the driver. Even though Taarak knew why he was being asked to stop, he feigned ignorance. ‘Why should we stop sir? This is the correct route to Chandigarh,’ he said.

‘Find a way to avoid the police checkpost,’ said Saini reluctantly, unaware of the fact that Taarak wanted to avoid the cops just as much. The owner of the Tata Safari at Abu Road Station was lying dead in a ditch. Taarak had quickly donned the dead taxi driver’s clothes and had assumed his new role, offering a twenty p,’ replied Sir Khan" aid="7K4 on the Kaliyugaercent discount to Saini in order to ensure that he was hired.

‘Yes sir,’ retorted Taarak smartly as he took a sharp left at a chemist’s shop in order to avoid the check post.

‘I’m not too familiar with Jodhpur roads so I will need to get down and ask for directions,’ said Taarak as he parked the car on the side of the road and got out. He had a short chat with a taxi driver in the distance and re-joined them. ‘He said that we should go first to Mandawar. From there, a road will take us via Laxmangarh to the National Highway. It will help us avoid the police check post,’ he said as he turned the ignition. Saini nodded while Priya and Kurkude, seated in the back of the car, remained absolutely quiet.

Within ten minutes they were out of Jodhpur and on their way to Mandawar. As the hustle and bustle of the city gave way to sand dunes and unending vistas of the Thar desert, Taarak settled back in the driver’s seat and allowed himself to relax. His mind wandered for a while before focusing on his childhood once again.

‘Taarak, this is Pushpendraji. He shall be teaching you
Sastravidya
,’ said Mataji.

‘What is Sastravidya?’ asked Taarak.

‘Our Indian scriptures—particularly the
Ramayana
and
Mahabharata
—contain descriptions of the ways in which combat was conducted in ancient India. This included both armed and barehanded strategies. The
Mahabharata
provides detailed descriptions of the intense battle between Arjuna and Karana, in which bows, swords, trees, rocks and even bare fists were used. An encounter in the
Ramayana
shows how two fighters used boxing manoeuvres with clenched fists whilst simultaneously incorporating kicks, head butts, finger strikes, and knee strikes. The result was the development of sixteen key principles of Indian martial arts. These are the only sixteen principles that you shall need to learn. Having learnt these, you shall be a master of Sastravidya and it will be impossible for the uninitiated to fight you,’ explained Pushpendraji.

‘Absolutely. She was trained by me in her school. Why don’t you show dear Taarak your skills, Mataji?’ said Pushpendraji.

Before Taarak knew what was happening, a slim Ninja spike flew from Mataji’s left hand—it had been carefully concealed in her sleeve. It twirled in the air momentarily before it hit the wall just above Taarak’s head. ‘See what training can achieve, Taarak?’ asked Mataji, smiling. Taarak nodded seriously.

‘Here is some vermillion paste. Put a tilak on my head and then touch my feet,’ instructed Pushpendraji. Taarak did as he was told. Pushpendraji then said, ‘Now hold out your right hand please.’ As Taarak did so, Pushpendraji took a bundle of
moli
—red and yellow thread used by Hindu priests while performing religious ceremonies—and wove it around Taarak’s
wrist. ‘You are now officially my disciple. Each day we shall practice Sastravidya for an hour. In a few years you shall be as strong as a bull, powerful as a tiger, fast as a cheetah and clever as a fox!
Om Namah Shivaya!’