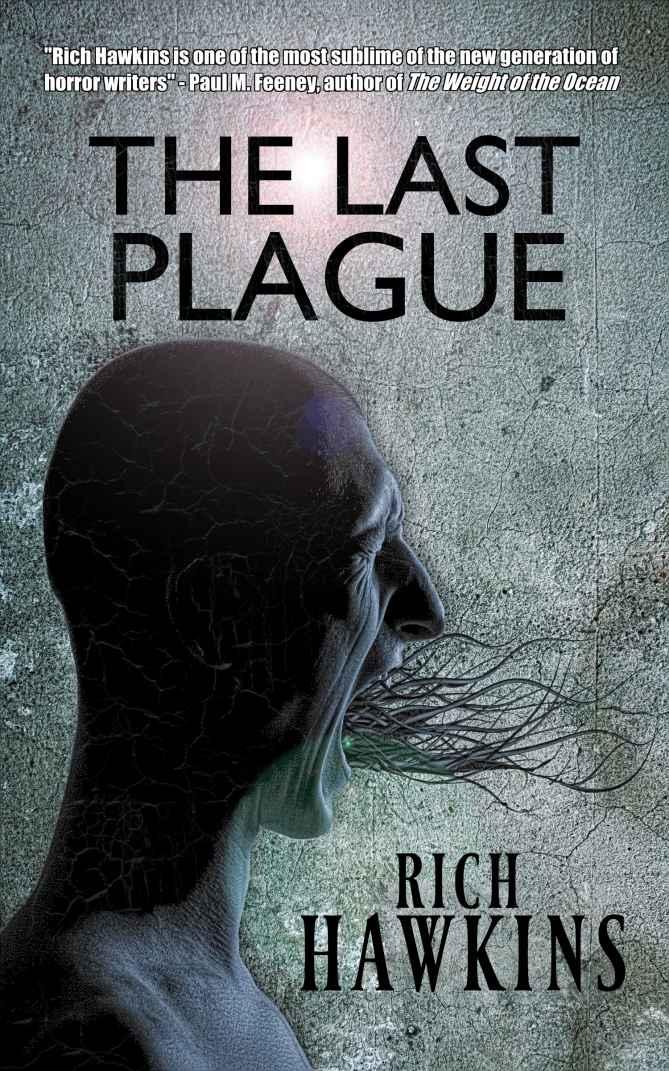 Rich Hawkins lives in Salisbury, England, with his wife and daughter. He has several short stories published in various anthologies. ‘The Last Plague’ is his debut novel.

This Edition Published 2014 by Crowded

and any resemblance to real persons, living or dead,

form or by any means without the prior

cover other than that in which it is published

and without a similar condition including this

condition being imposed on the subsequent purchase.

A CIP catalogue record for this book

is available from the British Library

Thanks and gratitude to my family and friends, present and absent; my old mates from the good old days (you know who you all are). Cheers to Matt Darst for his beta-reading talents and literary wisdom, Paul M. Feeney for the kind words, Adam and Zoe Millard for having faith in me, David Moody, Wayne Simmons, Adam Baker and Conrad Williams for inspiring me, everyone in the Facebook groups Moody’s Survivors and the Wayne Simmons Fan Page, all the other writers I’ve come to know online, and everyone who’s ever supported me and my writing.

My humble appreciation to you all.

To Sara, Willow and Molly,

Who keep me sane amidst the madness

Her name was Florence, and she did not cry when the end of the world came. She didn’t scream when Mr. Stewart from next door stumbled into the garden with something pulsing and wet erupting from his throat.

In the distance a plane fell from the sky and vanished beyond the curve of the earth. She heard the explosion just before the black smoke stained the horizon. She imagined fire and metal and people burning in their seats. She imagined bodies obliterated by impact with the earth.

Mr. Stewart fell down, writhing on the front lawn, spluttering a yolky fluid from his mouth. His bones pushed against his skin. He arched his back and his insides cracked and popped like something chewed by a slavering mouth.

Florence watched him with fascination, her feet planted on the garden path. The smell of cut grass in the air. She did not run away.

Florence’s father grabbed her by the arm and dragged her into the house. Her mother was waiting for them in the kitchen. Smudged make-up and running eyeliner. Pale skin like boiled tripe.

“What about the television?” Dad asked.

“What do we do?” Mum’s voice was strained.

Mr. Stewart was screaming outside. He didn’t sound human.

Dad picked up a carving knife. “Lock the doors.”

The battered and dirt-speckled Vauxhall Corsa was an intestinal worm in the guts of the Kent countryside.

Frank Hooper’s bones shook as the car lurched over a pothole. The road’s surface was scarred and uneven, dusted with gravel and dirt. The shadows of trees loomed across the road, stretching from one side to the other, onyx and creeping with the sun behind them.

His back was aching. Driving was bad for his posture. His throat and mouth were dry, like he had been chewing cotton wool. He yawned. A dull pain throbbed at the top of his skull.

“We’re nearly there,” said Joel, studying the map beside him. “I think.”

“You’re the one who turned off the sat-nav.”

“I like your mother’s voice,” said Ralph, from the back seat. “Especially when she talks dirty.”

“You’re obsessed with older women,” said Magnus, across from Ralph.

“She hasn’t aged as well as Janeway,” said Ralph.

Frank glanced at Joel. “Look at the map. Find out where we are.”

“No need to be sarcastic.”

“We just went through Wishford. The house is somewhere around here.”

“Now you’re being sarcastic. It’s not very far. Keep an eye out.”

Frank’s grip on the steering wheel tightened. He slowed his breathing, exhaled through his nose, and his hands loosened upon the wheel until he relaxed again and the throbbing in his head faded a little.

Ralph laughed. He was short stocky man with a crew cut, eating a packet of crisps which rustled every time he reached his ape-like hand inside. The floor around his feet was sprinkled with bits of food. Frank glanced back to see Ralph brushing crumbs from his lap. Frank sighed, didn’t bother to scold him. There was no point.

“You two are like an old married couple,” Ralph said.

“They’ve been like that since school,” said Magnus. He was shaven-headed; an attempt to hide male-pattern baldness, a hereditary condition in his family. Thick-rimmed glasses framed his grey eyes. An oversized jacket and cargo pants shrouded his meagre, wiry figure.

“So are you both sharing a room, when we get there?” Ralph asked.

“They wouldn’t let the ugly fucker on television,” Magnus said.

“Piss off,” said Ralph. “There are many women who can’t resist the bearded and portly look.”

“Depends how drunk you get them,” said Frank.

“Don’t be too hard on yourself,” Joel said. “There are plenty of ugly, sober women out there that’ll sleep with you. A lot of desperate women out there.” He winked at Ralph.

“I don’t need your sympathy, Joel – you’re the poor sod getting married next month.”

“Says the bloke who’s got his right hand for a girlfriend.”

“Left hand actually. Well, both, to be honest.”

“Have they got names?” asked Frank.

The four men laughed. Magnus tried to twist Ralph’s ear between his thumb and forefinger, but Ralph batted away his hand and slapped him on the back of the head.

Ralph grinned. “Love you too.”

They passed a small farm with a grey-walled, crumbling barn. A tractor was parked at the front of the farmhouse.

Ralph finished the crisps and scrunched the packet into a ball.

“Where you thinking of putting that?” Frank eyed him from the rear-view mirror.

Ralph made an innocent face. “Somewhere…”

“Put it in your pocket; if you can’t do that, put it up your arse. You’ve already made enough mess.”

“Wouldn’t putting it up my arse make more mess?”

“No need to use the long words, college boy.”

“Okay.” Ralph put away the empty packet, then picked up a paper bag of cookies from the seat. He nibbled on one, and crumbs fell down the front of his Metallica t-shirt, over his curved belly and onto his thighs.

“Sorry,” Ralph said, mashed up cookie in his mouth.

Joel turned to Frank. “See? That’s what you get when you let a monkey in your car.”

Ralph gently kicked the back of Joel’s seat, and he jumped.

Joel looked down at the map. “Uh, I think I’ve worked it out.

“This should be good,” said Ralph.

Joel ignored him. “Keep following this road for another few miles then turn onto a smaller road, which will take us to the house.”

Frank guided the car around a tight bend. The sun was falling and the chill in the air touched his skin. His headache was almost gone now. He spared a glance away from the road and saw the fields open up on either side. Some were filled with the distinctive yellow of rapeseed, stark against the land’s dull greens and browns.

“Reminds me of Somerset,” said Magnus, staring out of the window.

“You sound disappointed,” Magnus said. “Would you have preferred to go up north?”

Ralph grunted. “You must be joking. Last time I went up north a transvestite tried to fondle me.”

“Do you hear that?” asked Joel.

“Could be my stomach,” Ralph said.

A military truck shot around the bend, filling most of the narrow road and momentarily blocking the low sun. Its shadow fell across the car, engine growling like a large, angry animal.

Frank turned the wheel sharply, bringing the Corsa to a stop at the side of the road, skidding on the grass. The truck’s massive wheels passed inches from Frank’s window, swiped the wing-mirror and kicked up bits of gravel and dust against the car. Ugly angles of dark green metal smeared with dried mud. The stink of diesel and oil filled its wake as it disappeared down the road.

Frank looked at the wing-mirror lying on the road.

Another army truck blared past them and crushed what remained of the severed wing-mirror.

Death of an Expert Witness by P D James
Daughter of the Winds by Bunt, Jo
Flow: The Cultural Story of Menstruation by Elissa Stein, Susan Kim
Black Desire by Karyn Gerrard
Step Brother by Jayna King
Up to This Pointe by Jennifer Longo
Playing House by Lauren Slater
How to Capture a Duke (Matchmaking for Wallflowers Book 1) by Bianca Blythe
Redemption of the Dead by Luke Delaney
Twixt Firelight and Water by Juliet Marillier
Our partner