The Last Time We Spoke 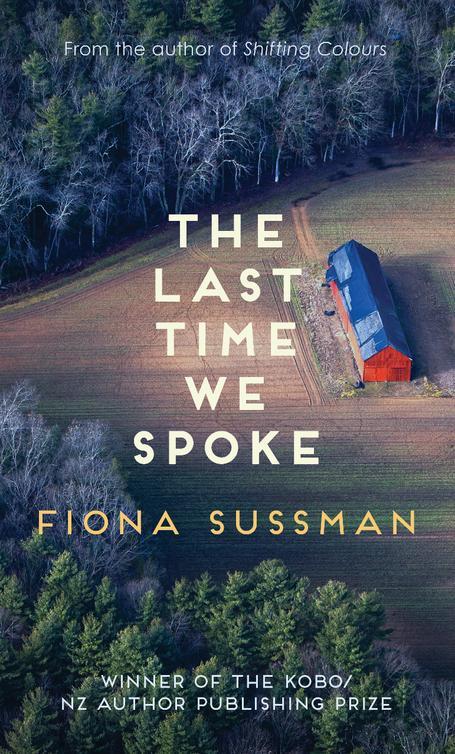 The Last Time We Spoke

To those living in the shadow of a violent crime

The author states that any resemblance between fictional characters in this novel and any persons dead or living is purely coincidental. The surnames of some of the characters do not have a genealogical basis.

‘What will become of the monster?’

Thirty pairs of eyes grew wide. Felicity Taylor started to whimper and Garth Mullins rammed a finger up his freckled nostril, examined his haul, then sampled it.

‘Garth!’ Carla said, fixing him with a frown and shaking her head, strands of her ink-black hair escaping the order of a tortoiseshell clasp.

The class of new entrants sat cross-legged on the square of cranberry carpet. It was a humid February morning, and despite all four sash windows being open, the air was still and thick, and the children restless. Even the Loch Ness monster drooped from the roof, its cardboard tail buckling, its green scaly body sagging. And Garth’s behaviour was worse than usual. The school year had barely begun, yet Carla already had a good idea of the little personalities in her charge.

‘He’s going to kill them all,’ the freckly boy shouted, his hands clawing at the air, his teeth gnashing.

Felicity was now in full-blown wail.

‘Garth, what about our quiet voices?’ Carla said, opening her arms and beckoning to the pale, strawberry-blonde girl. ‘Come here, love. It’s just a story.’

Felicity Taylor wriggled onto her teacher’s knee and buried her head into Carla’s neck, her nose cold against Carla’s skin. Carla turned the page, her silver bracelets jangling.

‘I don’t think our monster is quite that bad. Hilary and Owen, eyes this way.’

‘Let’s find out then, Nathan.’

Carla started to read again, her eyes darting from page to audience in playful exaggeration. ‘Deeper and deeper into the murky waters he slid—’

There was a knock at the door. The class let out a collective gasp as the principal, Miss Carr, stepped into the room. Instantly shoulders were pulled back and arms folded.

The chubby lad grinned. Carla winked at him.

‘Sorry to disturb you, Mrs Reid …’ The children scrutinised their principal’s bronze lipstick, sharp green shoes, and laddered stocking, ‘but there’s an important call come through for you in the office.’

‘An important call?’ Carla felt a rush of apprehension. She eased Felicity off her knee and stood up.

‘Don’t know what it’s about,’ her boss whispered. ‘Just said important. Something confidential.’

Carla hurried from the room and started down the corridor. She broke into a run, her red pumps clattering on the lino. Was it Kevin? Something on the farm? Please God her father hadn’t had another fall.

Five C was just returning from music when Carla rounded
the corner, the kids spread across her path in a noisy amble.

‘Excuse me. Can I get past? Excuse me,’ she said, weaving through the slow slouch of bodies. ‘Thank you. Can I get through?’

‘This is not a Sunday picnic, class. Move along!’ came the shrill Irish tones of Esther Creighton bringing up the rear.

Carla smiled in grateful acknowledgment, then hurried on, leaving Esther open-mouthed as the opportunity for a corridor gossip slipped by.

She was out of breath by the time she heard the familiar
tap tap tap
of Daphne at the word processor. The secretary stopped and peered over her glasses as Carla burst into the office. On the desk lay the black telephone receiver dislocated from the rest of the instrument.

‘Catch your breath, honey,’ Daphne purred, slipping a Mint Imperial into her mouth. The room stank of cigarette smoke.

Carla picked up the phone. ‘Hello?’ She could hear a hum of voices in the background. ‘Hello?’

‘Carla.’ The voice at the other end was familiar. ‘Sorry to disturb you at work, but I thought you’d want to know.’

‘Your test results, they’re back. It’s not Giardia after all.’

‘I’m what?’ Carla began to tremble. ‘Are you … I mean, that’s impossible!’ Eight years of trying. Her mind spun through it all.

The doctor kept talking, Daphne kept typing, and Carla wept and laughed at the same time.

When she finally replaced the handset, Daphne was waiting with a box of apricot tissues and her tell-me-all eyes. But Carla
wasn’t ready to talk. Silence would keep her baby safe. She excused herself and wandered back through the narrow corridors, past rows of hooked schoolbags spilling lunch boxes and books onto the floor, past frosted doors and serious silhouettes, past years of anguish and effort and resignation. And just before she reached her classroom, she turned and headed out into the sunshine.

The playground beckoned. Carla climbed onto the paint-peeled jungle gym, scaling the scarred yellow bars till she was teetering on the very top. Kevin was going to be a father. She flicked off her shoes, letting them drop to the ground. Her toes curled around the cool metal. Her father was going to be a
nonno
. She closed her eyes and stretched out her arms sideways, letting the cool fingers of breeze caress her. Then she jumped, her skirt billowing out to trap the freedom. She tumbled onto the grass and fell back on the damp earth, a twig snagging in her hair. ‘I’m going to be mother!’ she shouted, gazing up into the blue. ‘I’m going to be a mother!’

Then she saw them, her students’ faces pressed hard up against the classroom window – noses flattened, fingers pointing, hot breath misting up the glass – and behind them, squinting, a bemused Miss Carr.

‘Fuck, Debs, I’m pregnant,’ Miriama Kāpehu said, flicking off the top of a bottle of DB Draught and taking a long swig.

‘Choice, girl,’ Debs said, eyeing her friend’s flat midriff with a mix of respect and suspicion.

‘It’s not bloody choice. Joel will lose me soon as he finds out. And I can’t go back to the olds now. Not after running away with
a man with a patch,’ she groaned, shaking her slight shoulders to imitate his staunch stance. ‘I’m stuffed.’

‘Teach you for letting him poke you without protection, girl,’ Debs said, snorting with laughter.

Miriama lay back in the dry grass and looked up at the sky littered with shredded clouds. ‘Got a smoke?’

Debs passed over her half-smoked cigarette. ‘How far gone?’

‘Three months! Too late for Family Planning, hon.’ Debs broke a twig in two and used the sharp end to clean one of her fingernails. ‘I knows this woman who does the business. Cost you ’bout a hundy to get rid of it.’

The two girls lay beside an upturned supermarket trolley in the middle of the empty lot, contemplating Miriama’s predicament.

‘Hey, you can’t have the whole smoke,’ her friend said, grabbing back the glowing stub. ‘It’s my last one.’

A week later, in some house in Drover Street, in a dank-smelling bedroom with peeling pink wallpaper, Miriama lay back on a grey plastic tarp. It stuck to the backs of her thighs and left a crisscross pattern on her bottom. She spread her legs, and a woman whose name Miriama never got to know stuck a knitting needle through the mouth of her young womb. But it was a hundred dollars wasted, because the
koru
of cells didn’t let go. It held on, refusing to be annihilated. Perhaps it was meant for greater things … Grasping at life through bleeding and infection, it continued to grow, and six months later, on April 1st, like some rude joke, it made its way into the world, tearing Miriama asunder.

To Miriama’s surprise, Joel had been pleased about the pregnancy. He’d seemed almost excited at the prospect of becoming
a father, at night rolling into the deep dip of their bed to put his ear to her growing belly.

‘I thinks it’s a Lenny,’ he once said, his black curls tickling her taut tummy.

‘You can’t call him Lenny,’ she protested. ‘I had this really ugly uncle called Lenny. He had hundreds of warty bumps all over his face. Anyway, it’s gonna be a girl.’

Miriama knew Joel wanted a son, but she was carrying high and everyone told her that meant it would be a girl.

They finally agreed on the name Benjamin Joel if it was a boy. Benjamin, after Bennie Edmonds, Joel’s best mate in the gang. Miriama didn’t like the idea of naming her son after one of the mob – it was a bad omen – but she gave in because she was sure she was having a girl, and then they’d call her Aroha Jude. Aroha after Miriama’s mother, even though they hadn’t seen each other in the longest time, and Jude after Jude Dobson, the pretty presenter on
Sale of the Century
. Miriama hoped her daughter would be pretty too.

Now she wiped the matted hair off her forehead and sank back into the pillows. The midwife, a round, rosy woman with warm hands, placed the baby next to her. Miriama took a closer look. A shock of black hair stood to attention on its crumpled brown scalp, and little popsicle-stick fingers poked out from under the soft
pink
blanket. Well, she thought she was having a girl, didn’t she!

Miriama’s breathing started to pick up. It wasn’t that she was out of puff or anything. Rather, it was a sort of panic growing inside her.

‘Course you are. The bloody best.’ Her friend laughed. ‘Now don’t be so serious. You look like you seen a ghost.’

Miriama slipped her pinkie into the baby’s tiny creased palm and five little fingers rolled tightly around it, giving her goosebumps all over.

She spent three nights in the National Women’s Hospital because of all the stitches down below. It was awesome. She’d never stayed in hospital before and it was how she imagined a hotel would be – food delivered on a tray three times a day, a jug of fresh water every morning, and a hot shower whenever she wanted. And Joel was so chuffed at getting the son he’d ordered, he swaggered into the ward that first night holding the biggest bunch of flowers she’d ever seen and wearing a grin as wide as the world.

On the day of discharge, Debs ordered a taxi, and Miriama was driven home like proper royalty, sitting there in the back seat with baby Ben wedged between her and her best friend.

But when they got home, Joel was there with his crew. They’d been on the booze all day.

‘Come ’n’ party,’ he said, grabbing her round the waist.

‘I’ve just had a bloody baby!’ she flashed, wriggling free.

His eyes darkened. ‘So now you got your fuckin’ baby, you think you can jus’ turn your back on me?’ he roared. ‘Well that’s not how it’s gonna be. Not with tits this size.’ His hands moved up under her shirt and squeezed her swollen breasts. She winced as two damp patches bloomed over her blouse.

A few of the guys sniggered; others shifted uncomfortably.

‘Get off me!’ she cried, driving an elbow into him.

Joel’s top lip curled back over his teeth, and he swung her round, the Moses basket pirouetting with her.

‘I said, come party,’ he hissed, his sour breath hot against her cheek.

Debs lunged forward and grabbed the basket with baby Ben inside, just as Joel grabbed a fistful of Miriama’s long black hair.

‘Jesus, man. Give her a break,’ Debs screamed.

‘Shut the fuck up, woman, or I’ll give you a reason to moan.’

Later that night Miriama got up to give her baby a feed, but her milk had gone and she couldn’t fill the screaming, wrinkly kid. It cried all night until Joel told her if she didn’t do something he’d shut the baby up himself. So she took the little one onto the street and they walked up and down until dawn.

From the first day home, it was so hard having a baby.