Read The Lava in My Bones Online

The Lava in My Bones The Lava in My Bones 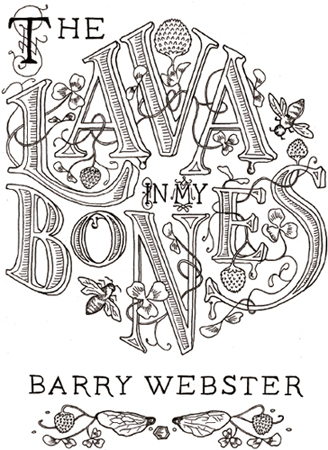 THE LAVA IN MY BONES

All rights reserved. No part of this book may be reproduced in any part by any meansâgraphic, electronic, or mechanicalâwithout the prior written permission of the publisher, except by a reviewer, who may use brief excerpts in a review, or in the case of photocopying in Canada, a license from Access Copyright.

This is a work of fiction. Any resemblance of characters to persons either living or deceased is purely coincidental.

Lyrics from "I Got You, Babe" by Sonny Bono Â© 1965 (Renewed) Cotillion Music, Inc. and Chris-Marc Music. Reprinted with permission of Alfred Music Publishing Co., Inc.

The lava in my bones / Barry Webster.

For Brian D. and Stephen N.

I am among those who think that science has great beauty. A scientist in his laboratory is not a mere technician: he is also a child placed before natural phenomena that impress him as though they were fairy tales.

I cannot understand why my arm is not a lilac tree.

Sam rifled through his lover's drawer and discovered a dog-eared book called
Fairy Tales of Flesh.
He flipped the pages hoping to find evidence of himself.

He read long stories about witches with phalluses for teeth, men with breasts for testicles, huge walking elbows, chins, and disjointed body parts who performed elaborate Maypole dances together yet couldn't synchronize themselves enough to form a functioning human body. One tale described two ghosts who had sex; their ephemeral skins flowed into each other, and the erect penis became so foggy you could run a hand through it. Sam read of rock people who made love with such violence that their bodies fractured, crumbled, and were blown away in the breeze. There were tales about women whose body fluids drowned entire civilizations, lovers who bit off each other's organs and when they opened their mouths, birds flew out.

The final story described a free-floating world where Mr. Potato Head-like people could remove and try on each other's body parts as if they were brooches or clip-on bowties; of course, sexual organs were most in demand and people started hoarding. National outrage ensued when police discovered a woman with fourteen breasts and sixteen penises pointing in all directions like the quills on a durian fruit.

Although Sam couldn't put his finger on exactly how, he knew these tales were telling the very story of his life.

Sam stares through his barred window at a spot of earth that
looks no bigger than a postage stamp. Soon the guard will unlock the door and offer him dinner.

Sam's not sure if he's in prison, a hospital, purgatory, or hell. If this is heaven, he thinks, how disappointed his mother will be.

From the hall he hears boots stamping, the squeak of trolley wheels, voices over the loudspeakers, “Ted Murphy wanted in the L-wing.”

Sam puts his head against the crisscrossing bars. The metal is cold against his forehead.

Has the scientific community reacted to his collapse with horror or delight? Surely not indifference. If Franz knew, he'd be mortified. “I had no idea Sam was like that.
Scheiss.
I should be careful who I hang out with.” Sam's mother and sister haven't come banging on the door, which shows he's made progress in life.

Is Sam ashamed of what he did in full view of the whole world? Studying the snow-covered lawn outside, he realizes he feels no shame, and this self-assurance amazes him.

He remembers the rise of Franz's stone-solid chest, with scattered hairs bending like windblown grasses.

A few months prior, Sam had lived in a Toronto basement apartment that was empty but for a desk, bed, computer, and stacked plastic cubes containing rock samples. The microscope was never put away but stood defiantly on the desk. While he slept, his hand would twitch in empty space on the bedspread as, with his ear pressed to a pillow pressed to a futon pressed to the earth, he'd hear the fire burning at the Earth's centre. There, lava coagulated into gigantic globules that collapsed downward into a sea of fire that broke apart and rose up to join other steaming, shifting masses in a subterranean landscape that perpetually devoured and recreated itself. In the morning when Sam woke, his friend was everywhere. Franz's shoulder was the rock sheath jutting from the dirt beside the apartment parking lot. Protruding stone spheres behind the corner store were nodules in Franz's spine. The lakeside cliffs were the edges of his forehead and nose. With his hands on his ears, Sam would run down Toronto's cement-walled streets, through car-flurried intersections, across deserted squares, over empty, wind-whipped fields, but no matter how fast he raced, no matter how many buildings he circled, there was always the sudden, scuffled scrape of stone beneath his feet and the fire roaring at the Earth's centre.

But then again, he was nowhere.

Sam stood on the edges of oceans, straining to see his friend's face in the horizon. He shouted his name into windstorms, waved huge placards from atop mountain cliffs, but the world was too vast, distances were too great, and the Atlantic Ocean was like a wall.

Now Sam touches the gridwork of metal bars with the open palm of one hand. He does not know why desire destroyed him, why his own frail frame couldn't bear the force of what is a part of human nature.

One year earlier, Sam sat nervously on a plane bound for Europe. He fingered the steel seatbelt-buckle that flickered like a winking eye. Tomorrow, at a climate-change conference, he'd give his first lecture ever. At university Sam had avoided public speaking. Now this “genius” who'd gotten a BA, MSc, and PhD in eight years would visit another continent. “Talking,” he muttered as the plane shot like a bullet from the runway, “is necessary. Nothing else works.” Despite all his journal articles and studies for the Science Council of Canada, ice caps were still melting and temperatures were rising. Canadians only half-listened to him, but Europeans were more environmentally aware; at last, he could have an impact.

Blaze (The Firefighters of Darling Bay Book 1) by Rachael Herron
Fire in a Haystack: A Thrilling Novel (Legal Mystery Book Book 1) by Erez Aharoni
Monster of the Apocalypse by Martens, C. Henry
Days of the Dead by Barbara Hambly
Norton, Andre - Anthology by Catfantastic IV (v1.0)
Death in the Devil's Den by Cora Harrison
Hunters' Game by Denyse Bridger
Nothing to Lose by Norah McClintock
The Arrangement (New Hampshire Bears Novella) by Mary Smith
The Fourth Sunrise by H. T. Night
Our partner