The Life of Anna, Part 2: Entwined 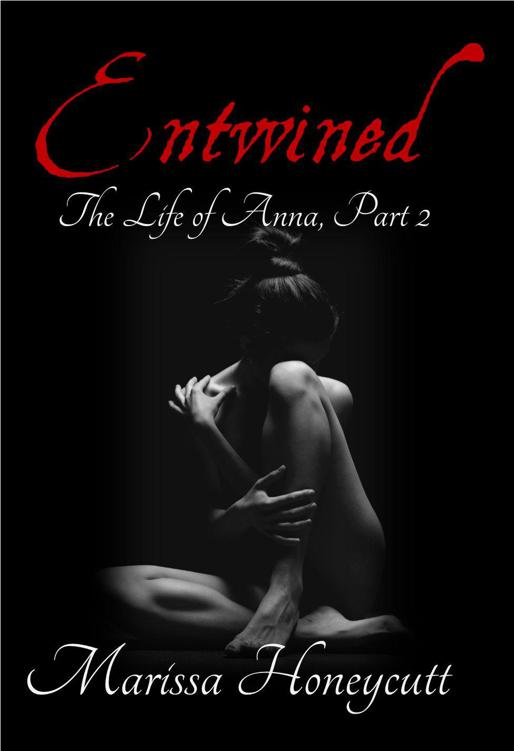 The Life of Anna, Part 2: Entwined

All portrayals of sexual acts are between adults (aka, over the age of 18).

This book is for grownups. This book is not for people who are easily offended, get nightmares easily, or have difficulty reading books about tough subjects. I do not glorify bad things, but bad things do happen to my poor characters. This is not your typical love story. My heroine does not fall in love and live happily ever after... at least not like the typical heroine. There is a happily ever after, but it is a long, painful journey to that end.

This is not a stand-alone novel. The series must be read in order.

But, don’t worry. I take you to the deep end gradually. ;)

There are many sexual situations in this series of books. People die. People get hurt. Things aren’t always truly the way they appear. The antagonist isn’t just a bad guy; he’s EVIL. My heroine’s worldview is skewed; things that may appall you are perfectly normal to her.

Any violence in this book is non-gratuitous and crucial to the plot and character development.

Do not read this if you are under the age of consent in your country. Do not get angry if the subject or actual book upsets you. If you're reading this, you've been warned.

Alex sensed Anna the moment he walked into the Great Hall. He didn’t understand why he could sense when she was around, but he was glad nonetheless. Sometimes it was stronger than others, like now. Sometimes it was nearly impossible for him to keep himself from pulling her into his arms and kissing her like there was no tomorrow.

He caught himself before he started tapping his fingers on the arm of the chair. It wouldn’t do to appear bored or uninterested, even though listening to Devin’s moronic speech took him to the edge of his sanity. Devin's arrogance grated Alex, and he was thankful that his hood sheltered his face from view, else he’d have to school his features as well as still his fingers.

As it was, he relaxed his hand and turned his thoughts to the girl across the room.
Anna.

Anna’s obvious, deep-seated fear confounded Alex. An Elder-Mistress rarely showed any emotion at all; to see one so beat down and frightened struck him at his core. The other Elder-Mistresses he knew were beautiful, confident women that took the breath away of every man they came in contact with.

Anna was beautiful, yes, and breathtaking; no one would deny that. The innocence mixed with fear in those beautiful green eyes made the protective lion inside his chest want to steal her away and shelter her from all the evil in the world. What had happened to make her that way? What was she so afraid of? Alex had asked himself the questions a million times since he saw her last week, and still had no satisfactory answer for them.

In the dark, far corner of the room, Alex could just see a figure wrapped in white. His heart pounded as he realized that it was Anna.
His
Anna. Kurt might think that Anna was a fun toy to have around, but his brother would never be able to care for her the way Alex could. Alex’s heart had been bound to hers long ago by her own father.

Vati elbowed Alex gently and Alex pulled his hood down and looked away from the corner. It wouldn’t do for his precautions to be undone now. He had to remain aloof or Devin would become suspicious. Neither he nor his father knew exactly what Devin had planned, but Alex’s gut told him it was nothing good; they would be required to intercede before the night was over.

He composed his features to appear uninterested as Anna walked up the aisle to join Devin on the platform, but when Devin removed her cloak, Alex’s breath caught in his throat. Kurt had spoken of the beauty of Anna’s naked body, but to see it firsthand took his breath away.

He shifted in his chair as his gaze moved down her body, from the sable-brown hair that hung down her back in waves, to her shapely calves. Her neck was long and slender, her breasts full and round. Her nipples were pink and taut and oh-so tempting. The lines of her torso, the swell of her hips.... Alex gripped the arms of his chair tightly. God, she was beautiful.

Alex growled slightly as Devin mauled her in front of the men. Devin might think that Anna belonged to him, but before the end of the night, the American Elder would know the truth: Anna belonged to Alex.

Devin pushed her to her knees and Alex frowned. What was Devin doing? A Deacon handed him...a piercing gun? Her kind weren’t supposed to be marked as....

Anna looked at Alex suddenly and he saw the panic in her eyes. He resisted the urge to shove Devin out of the way and take her from him now. Marking an Elder-Mistress as a slave had been forbidden for centuries! What the hell was Devin thinking?

Devin spoke softly to Anna. She looked back at Devin and her eyes glazed over slightly.

“I don’t know, Alex,” his father whispered back. “But I can’t believe he would—”

There was a click and a sharp inhale of breath as Anna’s nipple was pierced.

Why didn’t she cry out? Tears glittered in her eyes and she clearly felt pain.

Vati didn’t reply, but stared at Devin and Anna.

“The piercings can be undone, Alex,” Vati said in a calm voice.

They both winced at the third and final piercing.

“Let him be, son. He’s not doing anything permanent. You can still take her after.”

Anna began shaking and Devin spoke quietly to her. Tears filled her eyes and she nodded before standing and walking over to Alex and his father, eyes filled with pain. She bowed and then motioned to the ground between them.

“Devin told you to come sit between us?” Vati asked, affection in his tone.

“Then do so. I would be honored to have you next to me, Anna.”

Sebastian!
Alex’s mental voice was a shout
.
I can’t sit and watch this!

The reply from his friend came a moment later.
You must, Alex. This is your chance to save her.

Vati said the piercings could be undone.

He’s not done, Alex. You must stay.

She’s in so much pain. I can almost feel it.

Put your hand on her head and concentrate.

Alex stroked her silky hair and then rested his hand lightly on top of her head. He felt warmth flowing through his body and into hers. After a few moments, she visibly relaxed.

Devin gave him a suspicious look, and Alex removed his hand. Her pain had been minimized, though Alex wished he could do more for her. He took a deep breath to calm his heartbeat and regain his patience.

While new Brothers were being initiated, Alex’s thoughts wandered once more. He wondered what else Devin was going to do tonight. What else
could
Devin do? Marking Anna as a slave was insulting enough.

Ian approached, and Anna stood and then followed him across the platform to the table. Alex’s stomach filled with dread as he saw Ian produce a set of manacles.