Read The Lighter Side Online 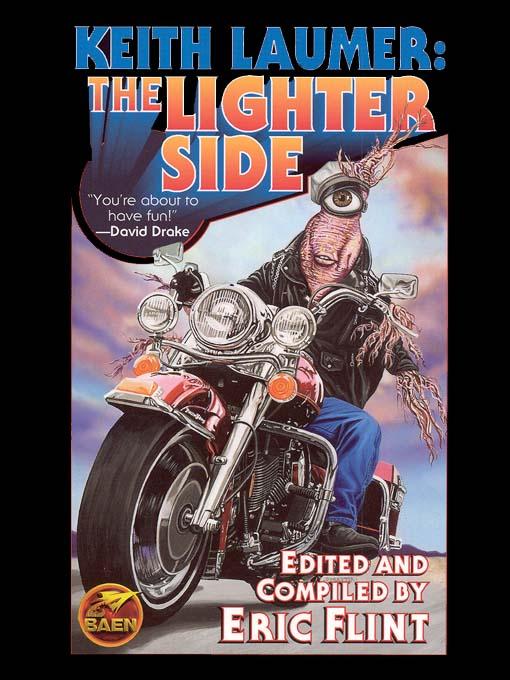 The girl lay in the rain by her crumpled motorcycle. "You must help me," she whispered. "Deliver the message: Beware the Rhox!"

"What rocks?" Roger looked around wildly. "I'll go for a doctor!"

"Seems like a funny time to worry about a hearing aid," Roger gulped, "but . . ." He held the button to his ear. Did he hear a faint, wavering hum, or was it his imagination? He pushed it in.

"Drive to Pottsville," the girl's voice said in his ear. "Start now. Time is precious!"

There was the sound of a motor. The headlight of a second motorcycle was approaching. As it shot past, he saw the shape behind the handlebars: a headless torso, bulbous, ornamented with two clusters of tentacles. Through the single goggle, an eye as big as a pizza swiveled to impale him with a glance of utter alienness.

With a strangled yell, Roger leaped back and saw the motorcycle veer wildly, hurling its monstrous rider clear, then skid to a stop in the center of the highway. Roger could see that the rider's upper portion was smashed into a pulp.

"I should go to the police," he said. "But what can I say? That I was responsible for the death of a giant rutabaga?"

"Time is of the essence," the girl's slightly accented voice said. "Get going! Take the motorcycle!"

"That would be stealing!"

"Who's going to report it? Relatives of a giant rutabaga?"

The Compleat Bolo
Retief!
Odyssey
Keith Laumer: The Lighter Side

The old man fell just as Farn Hestler's power wheel was passing his Place in Line, on his way back from the Comfort Station. Hestler, braking, stared down at the twisted face, a mask of soft, pale leather in which the mouth writhed as if trying to tear itself free of the dying body. Then he jumped from the wheel, bent over the victim. Quick as he was, a lean woman with fingers like gnarled roots was before him, clutching at the old man's fleshless shoulders.

"Tell them
me
, Millicent Dredgewicke Klunt," she was shrilling into the vacant face. "Oh, if you only knew what I've been through, how I
deserve
the help—"

Hestler sent her reeling with a deft shove of his foot. He knelt beside the old man, lifted his head.

"Vultures," he said. "Greedy, snapping at a man. Now, I
care
. And you were getting so close to the Head of the Line. The tales you could tell, I'll bet. An Old-timer. Not like these Line, er, jumpers," he diverted the obscenity. "I say a man deserves a little dignity at a moment like this—"

"Wasting your time, Jack," a meaty voice said. Hestler glanced up into the hippopotamine features of the man he always thought of as Twentieth Back. "The old coot's dead."

"Break it up," the brassy voice of a Line Policeman sliced through the babble. "You, get back." A sharp prod lent urgency to the command. Hestler rose reluctantly, his eyes on the waxy face slackening into an expression of horrified astonishment.

"Ghoul," the lean woman he had kicked snarled. "Line—!" She mouthed the unmentionable word.

"I wasn't thinking of myself," Hestler countered hotly. "But my boy Argall, through no fault of his own—"

"All right, quiet!" the cop snarled. He jerked a thumb at the dead man. "This guy make any disposition?"

"She's lying," Hestler cut in. "I happened to catch the name Argall Hestler—right, sir?" He looked brightly at a slack-jawed lad who was staring down at the corpse.

The boy swallowed and looked Hestler in the face.

"Died intestate," the cop intoned, and wrote a note in his book. He gestured and a clean-up squad moved in, lifted the corpse onto a cart, covered it, trundled it away.

"Close it up," the cop ordered.

"A rotten shame. The slot goes back to the government. Nobody profits. Goddamn!" the fat man who had spoken looked around at the others. "In a case like this we ought to get together, have some equitable plan worked out and agreed to in advance—"

"I meant to suggest nothing illegal." The fat man faded back to his Place in Line. As if by common consent, the small crowd dissipated, sliding into their Places with deft footwork. Hestler shrugged and remounted his wheel, put-putted forward, aware of the envious eyes that followed him. He passed the same backs he always passed, some standing, some sitting on canvas camp stools under sun-faded umbrellas, here and there a nylon queuebana, high and square, some shabby, some ornate, owned by the more fortunate. Like himself: he was a lucky man, he had never been a Standee, sweating the line exposed to the sun and prying eyes.

It was a bright afternoon. The sun shone down on the vast concrete ramp across which the Line snaked from a point lost in distance across the plain. Ahead—not far ahead now, and getting closer every day—was the blank white wall perforated only by the Window, the terminal point of the Line. Hestler slowed as he approached the Hestler queuebana; his mouth went dry as he saw how close it was to the Head of the Line now. One, two, three, four slots back! Ye Gods, that meant six people had been processed in the past twelve hours—an unprecedented number. And it meant—Hestler caught his breath—he might reach the Window himself, this shift. For a moment, he felt a panicky urge to flee, to trade places with First Back, and then with Second, work his way back to a safe distance, give himself a chance to think about it, get ready . . .

"Say, Farn." The head of his proxy, Cousin Galpert, poked from the curtains of the three foot square, five foot high nylon-walled queuebana. "Guess what? I moved up a spot while you were gone."

Hestler folded the wheel and leaned it against the weathered cloth. He waited until Galpert had emerged, then surreptitiously twitched the curtains wide open. The place always smelled fudgy and stale after his cousin had spent half an hour in it while he was away for his Comfort Break.

"We're getting close to the Head," Galpert said excitedly, handing over the lockbox that contained the Papers. "I have a feeling—" He broke off as sharp voices were suddenly raised a few Spaces behind. A small, pale-haired man with bulging blue eyes was attempting to force himself into Line between Third Back and Fifth Back.

"You don't understand," the little man was whimpering. "I had to go answer an unscheduled call of nature . . . " His weak eyes fixed on Fifth Back, a large, coarse-featured man in a loud shirt and sunglasses. "You said you'd watch my Place . . . !"

"So whattaya think ya got a Comfort Break for, ya bum! Beat it!"

Lots of people were shouting at the little man now:

The little man fell back, covering his ears. The obscene chant gained in volume as other voices took it up.

"But it's my
Place
," the evictee wailed. "Father left it to me when he died, you all remember him . . . " His voice was drowned in the uproar.

"Serves him right," Galpert said, embarrassed by the chant. "A man with no more regard for his inheritance than to walk off and leave it . . . "

They watched the former Fourth Back turn and flee, his hands still over his ears.

After Galpert left on the wheel, Hestler aired the queuebana for another ten minutes, standing stony-faced, arms folded, staring at the back of One Up. His father had told him some stories about One Up, back in the old days, when they'd both been young fellows, near the end of the Line. Seemed he'd been quite a cutup in those days, always joking around with the women close to him in Line, offering to trade Places for a certain consideration. You didn't see many signs of that now: just a dumpy old man in burst-out shoe-leather, sweating out the Line. But he himself was lucky, Hestler reflected. He'd taken over from Father when the latter had had his stroke, a twenty-one thousand two hundred and ninety-four slot jump. Not many young fellows did that well. Not that he was all that young, he'd put in his time in the Line, it wasn't as if he didn't deserve the break.

And now, in a few hours maybe, he'd hit the Head of the Line. He touched the lockbox that contained the old man's Papers—and of course his own, and Cluster's and the kids'—everything. In a few hours, if the Line kept moving, he could relax, retire, let the kids, with their own Places in Line, carry on. Let them do as well as their dad had done, making Head of the Line at under forty-five!

Inside his queuebana it was hot, airless. Hestler pulled off his coat and squatted in the crouch-hammock—not the most comfortable position in the world, maybe, but in full compliance with the Q-law requirement that at least one foot be on the ground at all times, and the head higher than the waist. Hestler remembered an incident years before, when some poor devil without a queuebana had gone to sleep standing up. He'd stood with his eyes closed and his knees bent, and slowly sunk down to a squat; then bobbed slowly up and blinked and went back to sleep. Up and down, they'd watched him for an hour before he finally let his head drop lower than his belt. They'd pitched him out of Line then, and closed ranks. Ah, there'd been some wild times in the queue in the old days, not like now. There was too much at stake now, this near the Head. No time for horseplay.

Just before dusk, the Line moved up. Three to go! Hestler's heart thumped.

It was dark when he heard the voice whisper:
"Four Up!"

"Four Up!" the voice hissed again. Hestler twitched the curtain open, saw nothing, pulled his head back in. Then he saw the pale, pinched face, the bulging eyes of Four Back, peering through the vent slot at the rear of the tent.

"You have to help me," the little man said. "You saw what happened, you can make a deposition that I was cheated, that—"

"Look here, what are you doing out of Line?" Hestler cut in. "I know you're on-shift, why aren't you holding down a new slot?"

"You should have thought of that sooner."

"I swear I couldn't help it. It just hit me so suddenly. And—"

"You lost your Place. There's nothing I can do."

"If I have to start over now—I'll be over seventy when I get to the Window!"

"That's not my lookout—"

" . . . but if you'll just tell the Line Police what happened, explain about my special case—"

"You'd better go. Suppose someone sees me talking to you?"

"I had to speak to you here, I don't know your name, but after all we've been four Spaces apart in Line for nine years—"

A Lesson in Desire: Season of Desire Part 3 (Seasons Quartet) by Matthews, Sadie
Two Scholars Who Were in Our Town and Other Novellas by S. Y. Agnon
Pilgrim by Timothy Findley
The Mayne Inheritance by Rosamond Siemon
Trained by Three Panthers [Caves of Correction 3] by Cara Adams
Seeds of Rebellion by Brandon Mull
Tidal Wave by Roberta Latow
The Sheikh's Irresistible Proposal by Rayner, Holly
Appalachian Dulcimer Traditions by Ralph Lee Smith
The Paths of the Dead (Viscount of Adrilankha) by Steven Brust
Our partner