Read The Lighter Side of Large Online

The Lighter Side of Large 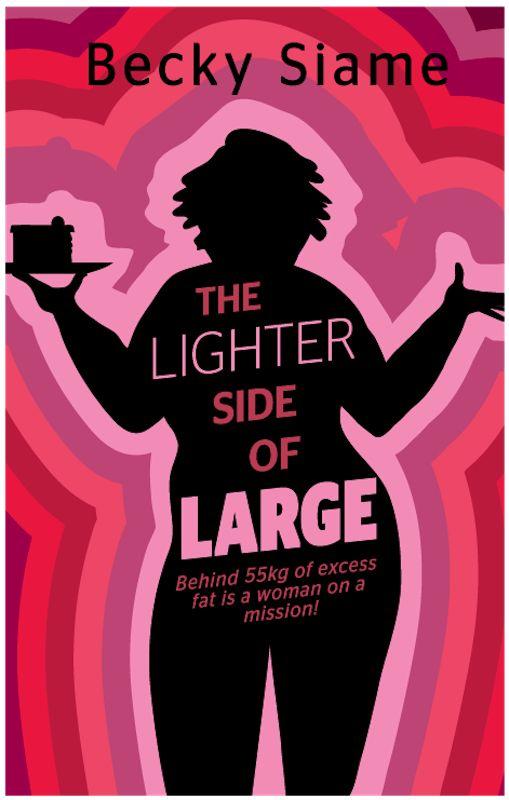 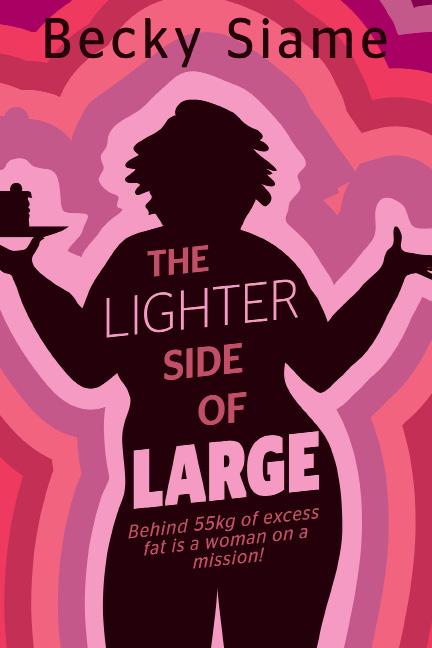 “Be kind. For everyone you meet is fighting a great battle.”

To my darling children, Abe & Phoebe, the loves of my life. May you know throughout your life that you are loved just as you are. To my Dad, Doug Duncan, who passed away on the 5th October 2011, right when I was in the middle of writing this story. You always encouraged me to be all that I could be and taught me that the sky is the limit of all that I may want to achieve in my life! Thank you. To Vic without you this book may not have eventuated. You know the characters and the storyline as well, if not better than me. Thanks for your long-suffering, encouragement, and dedication to helping me make this the best novel ever. I couldn’t have done it without you. To my beloved friend Roslyn who was with me 6 years ago when Bella’s story first started taking root and for all the laughs we had coming up with the cartoons about the various misadventures of being fat. Also thanks for the great one-liners that you, unknowingly, contributed to the book. To all my other friends and family, that helped me on my own personal journey to being ok with myself just as I am. You are loved!

I can’t believe I am here. Despite the opposition of the love of my life, despite the incident a few months ago which almost killed me, despite the misgivings of friends and family, here I sit along with several other women who look model-perfect.

A twinge of guilt nags at me, but I stubbornly push it aside. I want this. I need this. I can’t afford it, but I’m doing it anyway.

I look down at my hips, which fit snugly between the armrests of the chair. I have spent most of my life not fitting into chairs, taking up even two at a time. I have looked forward to sitting in a booth without the table cutting into my midsection and to grocery shopping without knocking cans off the shelf with a big butt with a mind of its own. I have bornethe muttered insults and disdainful glances of strangers, who hate me because of my size, in silent misery. I lost the weight, but now I need something more. So here I am, waiting
.

“What work are you getting done?” A voice interrupts my reverie. I look up at a bust bursting out of a tight hot-pink tube dress. Only after that do I see the skinny blonde behind the boobs. She looks like she stepped from the pages of a Victoria’s Secret catalogue.

She shrugs. “They’re fake. My boyfriend gave me his credit card and said to get whatever work done that I want. He’s used to being with really beautiful girls. His ex-wives are all actresses and models. So I figure I need to get rid of my imperfections so that he’ll stay with me.”

“Pardon me for saying so,” I say, “but I think you’re beautiful and perfect as is. Maybe he needs glasses.”

She laughs at my jest. “Well, you know how rich, older men are. I don’t think there’s any harm in getting plastic surgery in order to keep a man, do you? Do you have a boyfriend?”

“Definitely not.” I shake my head.

Why am I here?
I repeat the question to myself. There are lots of whys which led me here. “It all started nine months ago.”

“We cover up our obesity by making ourselves indispensable. If we make ourselves needed, then we won’t be rejected. Right?”

It is the first bit of solitude I’ve had today. Seven year-old Abe is out back climbing and exploring the bank of bushland that borders the boundary of the cosy three-bedroom box, which we call home. My five year-old daughter, Fi, is taking her afternoon nap.

I want to put my feet up and enjoy a few moments of bliss, curled up with a good romance story or watching recordings of
Shortland Street,
which I never get to watch because the kids hijack the TV. Instead, I wander around the house picking up and putting away clothes, toys and other scattered, abandoned incidentals.

The phone rings. The caller ID flashes: Mama Rose. I hesitate, take a deep breath, and pick up the headset.

These calls from Tina matua o le aiga, my grandma, start with enquiries about her grandchildren, followed by a tongue-lashing for me not attending or contributing to a family event. They end with a lecture on why I should keep in touch with my estranged sister, Tiresa. Why do I even pick up? Because she is family, that’s why- the last link to my mother.

“Hello, Isabella speaking.” I sound hurried and flustered as I pick up a straggly, water-soaked teddy bear. Fi, no doubt, had given him a bath.

“Hi, Mama Rose. How are you?” I ask, cradling the phone between my shoulder and my ear as I continue picking up toys. If I have to listen to another lecture, I might as well redeem the time while doing so.

“They’re wonderful, Mama Rose. Fi hasn’t stopped talking about the flax outfit she started making at your house last week, and Abe is determined to build a canoe. He’s scouting the tree trunks out back for a suitable base.” It is a slight exaggeration, but I learned long ago that it is easier to deal with Mama Rose if you tell her what she wants to hear. The lectures are shorter that way.

I barely listen as she rambles on, extolling the benefits of teaching her grandchildren about their culture and history. She long ago gave up teaching me the “Samoan Way”. Instead, She turns the full force of her efforts onto her grandchildren.

I am the firstborn, pride and joy of my soft-spoken yet fiery-tempered Scottish Dad, and the second-born of my late mother. She already had a one-year-old daughter when she met and fell in love with my Dad. I was born twelve months later. Dad raised Tiresa as his own, and we were brought up as true sisters until the ages of ten and eight, when tragically, unexpectedly, our mother died from cervical cancer and my sister and I were separated.

Anxious to get the conversation over, I interrupt. “Mama Rose, what can I do for you?”

Startled, Mama Rose hesitates before revealing the reason for the call. “You know that Tiresa and Mika announced their engagement a couple of weeks ago?”

Dread wraps its cold fingers around my heart. Squeezing, its sucks the air out of my lungs. I hadn’t known. And the last five years do not make it any easier to hear the news.

The silence on the phone is heavy as Mama Rose waits for my reply. “Oh, that’s nice,” I say, but the words sound strained and insincere.

“The family is throwing an engagement celebration for them in four weeks. I want to give you lots of notice so the children and you can be there. The wedding will be in nine months.”

“Mama Rose…” I start, resigning myself to her disappointment.

Sensing my imminent refusal, she prattles on. “I will need your help on that day, of course, cooking and such. I think it would be good if…”

Now I interrupt forcibly. “Mama Rose, you know I probably won’t be invited. I didn’t even know about the engagement until now.”

“Nonsense,” she huffs. “Tiresa is your blood sister, albeit half blood, but blood all the same. And even if you weren’t blood, family is family,” she finishes as I mouth her last words silently in unison. I’ve heard it all before.

“Tell that to Tiresa,” I spit. “She still hasn’t visited Dad since he was first hospitalised with cancer-and that was two years ago. He once was her family, too, you know.”

Tiresa hadn’t visited Dad for years, another bone of contention between us. When Mum and Dad got together, he promised he would love and support her daughter as his own. And he would have.

Although the family had reservations about Mum marrying outside the Samoan culture, Dad had been the best thing for her and Tiresa. They were happy and he was a good man. The family had been wrong to separate us after Mum died. They would have taken both of us, but Dad was adamant. He fought tooth and nail to keep us. It was quite the battle: fiery Scottish hotheadedness met generations of Pacifica island tradition. In the end, Dad lost the battle. He had no formal rights to Tiresa.

It’s been twenty-two years since Tiresa was taken from him, yet he never forgot his promise and obstinately waits for her return. Tiresa ignores him despite his failing health. She won’t acknowledge him as the doting, loving father that he is. If she would just give him a chance, she would see that.

“Well, I know nothing about that,” Mama Rose says, and then skillfully turns the conversation back to her agenda. “But it would be ridiculous if you weren’t there. Your sister will need you. Anyhow, you ARE invited because I’m inviting you.”

Phew! The end of the conversation is in sight,
I ponder wickedly to myself.

With a few more niceties and a goodbye, I am granted a reprieve, but the conversation leaves a sour taste in my mouth. When Tiresa and I were close, I would have been the first person she told about her impending engagement. How times change. A part of me misses that and wishes things could be different, yet another part of me knows I can never trust her again.

Mika, the man she is marrying, was my husband. He left me for her two weeks after our daughter was born.

“Online dating: being someone you’re not in order to get someone you want. Problem is, if everyone is lying about themselves, how can anyone find Mr/Miss Right?”

Everything at Café Crave is just a little wrong since the new manager took over. It used to be a quaint, comfortable hangout for Sands, Riyaan, sometimes Cat, and I to meet up for our weekly therapy debriefs.

The new manager is turning it into one of those up-scale á la carte cafés where yuppies are seen sporting designer label clothes and the latest Gucci handbags. The walls are now covered with original artwork from local artists, hung crookedly at different angles, as though someone keeps trying to get it right but is unable to do it. It’s hardly a place where a fat lady and her eclectic group of friends, including her very own stinky homeless friend, are welcome.