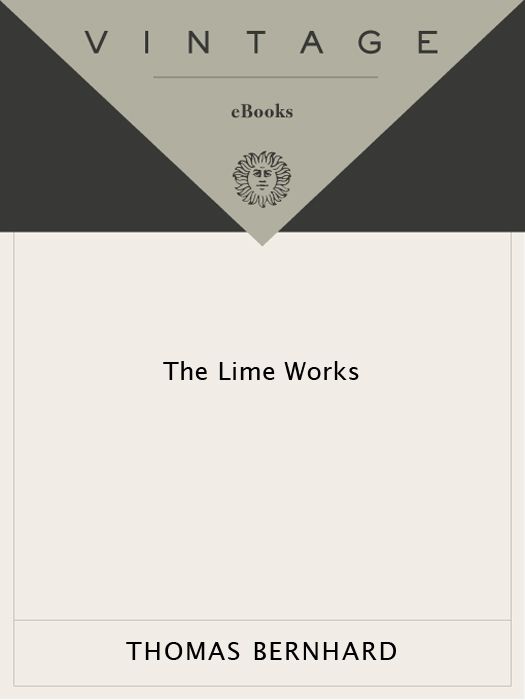 Thomas Bernhard was born in Holland in 1931 and grew up in Austria. He studied music at the Akademie Mozarteum in Salzburg. In 1957 he began a second career as a playwright, poet, and novelist. The winner of the three most distinguished and coveted literary prizes awarded in Germany, he has become one of the most widely translated and admired writers of his generation. He published nine novels, an autobiography, one volume of poetry, four collections of short stories, and six volumes of plays. Thomas Bernhard died in Austria in 1989.

The Cataloging-in-Publication Data for
The Lime Works
is on file at the Library of Congress.

But instead of thinking about my book and how to write it, as I go pacing the floor, I fall to counting my footsteps until I feel about to go mad
.

… when Konrad bought the lime works, about five and a half years ago, the first thing he moved in was a piano he set up in his room on the first floor, according to the gossip at the Laska tavern, not because of any artistic leanings, says Wieser, the manager of the Mussner estate, but for relaxation, to ease the nervous strain caused by decades of unremitting brain work, says Fro, the man in charge of the Trattner estate, agreeing that Konrad’s piano playing had nothing to do with art, which Konrad hates, but was just improvisation, as Wieser says, for an hour first thing early in the morning and another late at night, every day, spent at the keyboard, with the metronome ticking away, the windows open …

… next, Konrad bought a lot of guns, partly from fear but also because he had a passion for firearms, second-hand rifles mostly but in prime working order, from the estate of Forestry Commissioner Ulrich who died last year, well-known makes like the Mannlicher etc., which Konrad, an extremely shy man (Wieser), full of apprehension that tended to grow into panic ever since the landowners Mussner and Trattner were mysteriously murdered not so long ago, felt he needed to protect the lime works against burglars and in general against what he called
outsiders …

… Konrad’s wife, whose maiden name was Zryd, a woman almost totally crippled by decades of taking the wrong medications, and who had consequently spent half her lifetime
hunched over in her custom-built French invalid chair, but who is now, as Wieser puts it, out of her misery, was taught by Konrad how to use a Mannlicher carbine, a weapon the otherwise defenseless woman kept out of sight but always within reach, with the safety off, behind her chair, and it was with this gun that Konrad killed her on the night of December 24–25, with two shots in the back of the head (Fro); two shots in the temple (Wieser); abruptly (Fro) putting an end to their marital hell (Wieser). Konrad had always been quick to fire at anything within range of the house, they say at Laska’s, and as everyone knows he did shoot the woodcutter and game keeper Koller who was passing by on his way home from work one evening about four and a half years ago; quite soon after Konrad had moved in, carrying his knapsack and a hoe, and catching it in the left shoulder because Konrad mistook him for a burglar; for which shooting Konrad was in due course sentenced to nine and a half months at hard labor. The incident brought to light about fifteen previous convictions of Konrad’s, mostly for libel and aggravated assault, they say at Laska’s. Konrad served his time in the Wels district prison, where he is being held again right now …

… apart from the exceptional few who found his eccentric though quite inconspicuous personality interesting, people began little by little to cut him dead; even those who wanted his money preferred to have nothing to do with him. When I myself ran into him a few times on the road to Lambach, or Kirchham, and a couple of times walking through the high timber forest, he’d nail me every time by starting to talk without let-up on some topic of a medical or political or
scientific kind, or a mixture of all three; more about that later …

… at Lanner’s the word is that Konrad killed his wife with
two shots;
at the Stiegler place, with
a single shot;
at The Inglenook, with
three;
and at Laska’s with
several
shots. Obviously nobody really knows except, presumably, the police experts, how many times Konrad pulled that trigger …

… but the trial, set for the 15th, should cast some light—even if only in the legal sense, as Wieser says—on the mystery of this shooting, a mystery that only gets darker as time goes on …

The Water Road by JD Byrne
Orchards by Holly Thompson
And We Go On by Will R. Bird
Wyoming Sweethearts by Jillian Hart
Shadow Dancer (The Shadow Series Book 1) by Kline, Addison
The Decaying Empire (The Vanishing Girl Series Book 2) by Laura Thalassa
The Confession by James E. McGreevey
Heat Flash by Anne, Taylor
Under the Gun (CEP Book 3) by Harper Bentley
Beautiful Soul: An American Elegy by Joshua Corey
Our partner