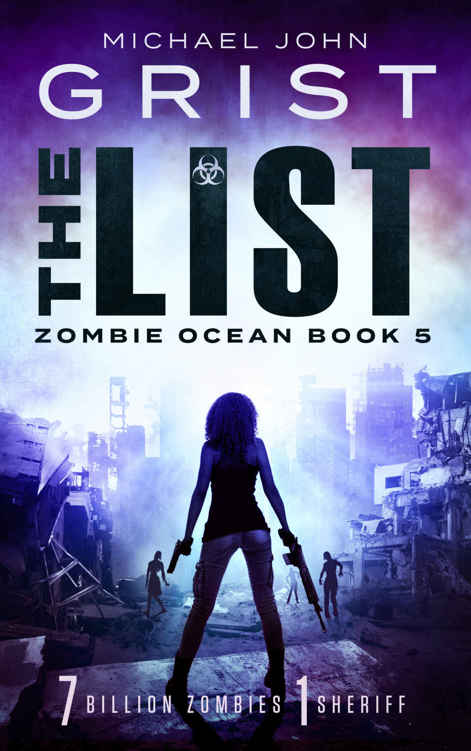 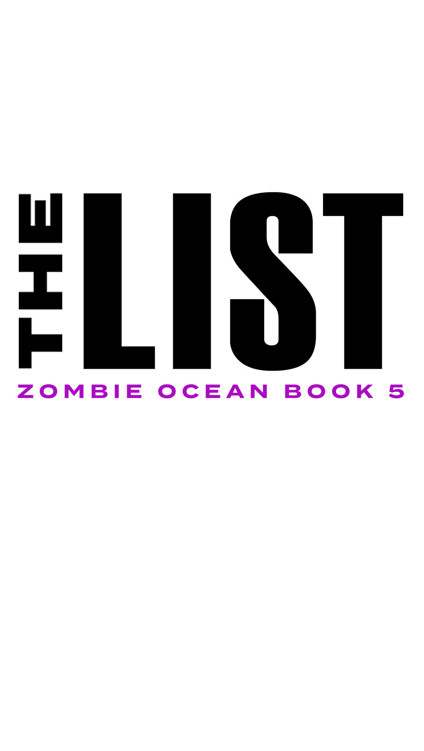 At five years old
Anna
survived the first zombie apocalypse, but lost her father. At fifteen she survived the second, but lost even more.
She won't allow a third.

She has a
list
of the 11 remaining bunkers. She has the skills to take them down. But the bunkers have a secret weapon, and won't go down without a fight.

The world will never be the same.

The List is the 5th post-apocalyptic thriller novel in the Zombie Ocean series.

Join the newsletter and get the free Starter Library of 2 post-apocalypse thriller books
here
.

For my readers. Yes, you.

Anna was on the beach again, looking out over the water. So often she found herself in this sad, bleak place, more and more these days.

The water was gray and stretched on forever, with frothy white waves studded with the bald white heads of zombies, sticking up like spikes in a trap. Once her father had been here too, sitting on his island far out to sea. She would run to him over the frozen waves, but no matter how fast she ran she never drew any closer.

"Anna," he'd call back to her from his island, his voice reverberating like distant thunder. "Dear Anna."

The end of the world had stolen him from her, like it had stolen so much. Ten years later she'd crossed the world to find him, only for him to die a final time in her arms in a Mongolian desert, torn apart by a red demon that didn't even know his name.

Now he was gone, and so the beach had changed.

There was a new figure crawling down by the water now, a deep black man who had loved her when they'd both needed love so much, who she'd abused and abandoned in return, who still wore the silver necklace of their mutual adoption round his neck.

His face was red and featureless but for a gaping black hole where his mouth should be. His arms were massive and bulging with muscle, his legs trailed uselessly behind him, curled up like rotten old red peppers, and he was crawling down to the lapping water line. Every night he crawled down to the water, and every night the ocean gathered him in to its cold, killing embrace, and every night for a time the tide receded.

In this sacrifice he was saving her, she knew. Every night he drowned again and again to save her, but standing there on the edge of the beach, looking out to a sky black with billions of the dead, she didn't know if he'd managed to save her from anything at all.

She'd killed thousands of people. She'd lied, cheated and brought pain to the ones she loved. So many people had died, and so many more were going to die, because there was no stopping now. The ocean was there and she'd been drawn to it all her life, never able to escape the pull of its great weight. Now every time she came to this place the gray disc of the sun sank a little further down on the horizon, and the waves pulled a little further out, and the darkness came on a little more deeply.

Every time, she followed the tide out. She strode across the cold and lonely sands that the tide left behind, plunging into the night and the depths, searching for some lost thing that she couldn't ever name, and couldn't ever find.

Anna jerked awake in the too-hot bed, in the RV in Portland International Jetport, Maine. The bed was narrow and she was slick with sweat, trembling as it chilled off her skin in the cold spring air.

Ravi by her side mumbled something and rolled over, his face pressing against the metal wall of the booth. Though they'd extended it with a folding coffee table, the bed was still too slim for the two of them, and somehow his knees always ended up exactly in the spot her knees needed to be. There were so many new things to learn, as a couple.

She kicked her legs gently out of the thin cover and sat for a moment on the creaking coffee table's edge, rubbing her eyes and working her fingers back through her tightly knotted braids. Ravi had had a big time learning how to knot them, weaving the knappy threads back and forth, and he took such pleasure in the long work of grooming that she didn't have the heart to tell him that she'd rather just shave it all off.

Three months had gone by, and the waiting was killing her. The fog in her head, probably brought on by the dream, didn't help. She got to her feet and padded unsteadily to the front, where the digital clock on the dashboard displayed the time in glowing green.

The middle of the night. It was still plenty dark outside, though the open expanse of runway shone with moonlight like a glistening lake. The sky was a rich dark purple, the moon was almost full, and stars filled the arc of heaven with a million little eyes.

She slumped into the driver's seat in the dark and sighed. The dreams were getting worse, always the same, always so tantalizingly close to peering right into the coming dark, but never quite seeing through to the other side.

Three months had passed and all she could do was wait.

Three months since their blistering trek east across the continent, since the Yankee Stadium horde took down all seven demons sent by Salle Coram's bunker, since she and Amo had entered the Habitat together and watched the three thousand budding Mars colonists transform into soulless, white-eyed zombies. They'd pushed the button, the demon had died, and the zombie horde had started east.

She sighed. After the debacle with Witzgenstein, three months of preparations, plans and trial runs had followed; of weapons practice, bomb runs and drone navigation; of meetings, politics and PTSD dreams. It was all good, all necessary, but she was exhausted with all the waiting.

She sipped chilly water from a worn plastic bottle. Her breath came out as vapor in the cool air, lit faintly green by the dashboard clock, and she pulled her jacket on from the back of the chair. Everything was tired and breaking down out here. Maine above ground had been dead for a decade, lying largely undisturbed but for the pilfering Julio had done for supplies.

There were no steaming croissants in the morning, fresh from Jonathon's New LA bakery; no warm milk straight from the udder poured over still-crisp, foil-packed Lucky Charms; no blueberry ice cream beaten and mixed that day. They had only rations of ancient canned leftovers left over from a past and ancient people.

Images of the waves danced before her eyes, and she ran a silent tally of all the ways they still depended on the old world for resources, infrastructure and equipment: preserved food, water, roads, vehicles, planes, runways, fuel and walkie-talkies. GPS, satellites, boats, buildings, electric lights. Space ice cream, first aid, the electron microscope, the remnant cables of the old Internet, DVDs, Ragnarok 1 to 3, and of course, lest she forget, the zombies.

Something stirred in the darkness outside, likely a deer or a fox come to dig through their trash. All the zombies were long gone now, chasing demons in Europe, somewhere at the bottom of the Atlantic in mid-ocean crossing. That left wildlife free to roam everywhere, wandering in and out of broken buildings like raiding Vikings. She squinted to try and pick this one out, but her eyes were blurry and she couldn't. All the trashcans had lids on anyway, for just this eventuality. The few wild chickens Cynthia had trapped for them were secure in their coop.

She brought up her walkie and scanned the channels. One was open, as it often was at this time, playing a tinny instrumental version of 'Dancing Queen' by ABBA. Peters loved that stuff.

"Ho, Peters," she said softly into the receiver.

"Anna, I thought you'd never show," he answered after a moment, in his lilting Swedish accent, comically like the chef off that puppet show Cerulean used to make her watch.

"The same dream," she said.

"I have been cataloging bullets," he responded brightly, ignoring her. "We have thirty-five different calibers."

Anna smirked. She could have told him that, as she'd stocked up their gun store, but it was better to let him get on with things. They'd become very friendly after falling out of the sky together, and she knew the rhythms of his depression about as well as he knew hers.