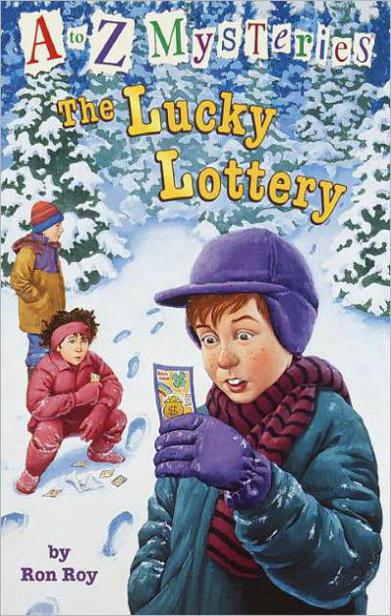 Here’s what kids and parents
have to say to Ron Roy about
the
A to Z Mysteries
series:

Whenever I go to the library, I always get an A to Z Mystery. It doesn’t matter if I have read it a hundred times. I never get tired of reading them!—Kristen M.

I love your books. You have quite a talent to write A to Z Mysteries. I like to think I am Dink. RON ROY ROCKS!—Patrick P.

I love your A to Z Mysteries. They’re really good. I love reading and hope to write books myself someday.—Eva Z.

I could not put
The Absent Author
down!—Mandy G.

Nothing can tear me away from your books!—Rachel O.

Every time I have a free minute I sit down and read your books.—Emily C.

Thank you for your wonderful books, Mr. Roy. Ryan has always enjoyed reading, but this is amazing. In one day he read all of D and E and got a good start on F. He just can’t put them down.—Mrs. V.

This book is dedicated to kids everywhere
who love to read.
—
R.R.

She and Dink hurled snowballs at Josh’s fort.

Josh’s grinning face popped up. “Missed by a mile!” he yelled. “You throw like a girl, Ruth Rose!”

“I
am
a girl!” Ruth Rose yelled back. She whipped another snowball, catching Josh in the face.

The sides were uneven, but no one
cared. It was Dink, Ruth Rose, and her little brother, Nate, against Josh and his dog, Pal.

Nate was in charge of making snowballs for his sister and Dink. Pal raced around barking and trying to catch the snowballs in his mouth.

Dink shrugged. He and Ruth Rose dropped their snowballs and walked over to the newcomers.

The taller one was a boy. He wore a dark blue parka and a green ski hat. The shorter one was a girl. Her red hair framed blue eyes and pink cheeks.

“And I’m Ben,” the boy said. “We
brought you a message from our big brother.”

Josh climbed out of his fort and walked over. “Who’s your brother?” he asked.

“Oh, now I recognize you,” Ruth Rose said. “You live over on Robin Road.”

Ben O’Leary unzipped his parka pocket and pulled out a crumpled note. “Here, Lucky said to read it right now.” He handed the note to Dink.

Dink flattened out the paper.

Guys, I need you.
Come to my house now. Urgent!
Lucky

“Did Lucky say what this is about?” Dink asked.

Dink, Josh, and Ruth Rose looked at each other.

“Let’s go!” Ruth Rose said. She pointed her brother toward their house. “Nate, please go stay with Mom. Tell her I had to go on a secret mission!”

Dink, Josh, and Ruth Rose followed Ben and Josephine. With Pal at their side, they headed for the west side of Green Lawn.

It was Christmas vacation, and the store windows on Main Street were decorated with tiny white lights. Snow covered the grass, but the streets and sidewalks had been cleared.

“Is your brother home from college?” Dink asked Ben.

Ben nodded. “He came home a couple days ago.”

“We bought a Christmas tree and presents!” Josephine added.

The kids crossed Main Street and
headed up Bridge Lane. They turned left and stopped at 33 Robin Road.

The house was tall and blue. Kids’ toys and sports stuff were scattered across the yard and front porch.

The five kids tromped up the steps. Josephine threw open the front door and clumped down the hall, leaving snow tracks on the floor.

Dink and the rest of the kids knocked the snow off their boots before stepping inside. Josh told Pal to wait on the front porch.

“Lucky’s in the kitchen,” Ben said, leading the way.

Lucky was making lunch for his six brothers and sisters. Lined up on the counter were six grilled-cheese sand-wiches, six glasses of milk, and six bananas.

“We brought ’em!” Josephine said. She and Ben hung up their jackets and
sat at the table with the rest of their sisters and brothers.

Lucky had grown taller since Dink had last seen him. His hair was longer, too.

“Hey,” Lucky said, nodding at Dink, Josh, and Ruth Rose. To his brothers and sisters, he said, “Okay, you guys eat your lunches. Be good, and no fighting! Ben’s in charge.”

“Why does
he
get to be in charge?” Josephine piped up.

“Because I said so,” Lucky said. Then he smiled at Josephine. “You can be Ben’s assistant, okay?”

Lucky beckoned for Dink, Josh, and Ruth Rose to follow him. Stepping over soccer balls, mittens, books, and hockey sticks, they trailed after Lucky into the living room.

A tall Christmas tree stood in one corner, half decorated. Ornaments and strings of lights covered the floor.

Lucky threw himself into a chair and rubbed the top of his head. “Someone robbed us,” he said.

Dink looked around the room. “What did they take?” he asked.

“Lottery tickets,” Lucky said. “Every year, my grandfather sends us kids a Christmas card with seven lottery tickets inside. Every year, he uses our birthdays for the numbers. And every Christmas morning, we open the card while he’s here. It’s a big ritual in my family. Nobody ever wins, but Gramps gets a kick out of it.”

Lucky pointed to a row of Christmas cards propped up on the fireplace mantel. “This year, a burglar got in here and stole his card. I hadn’t even opened the envelope!”

“But how did the burglar know there were lottery tickets inside?” Josh asked.

“I don’t know,” Lucky said. “My
grandfather called me this morning, all excited. He said he’d been reading his Sunday newspaper and saw that the winning lottery number was my birthday! But when I ran in here to get the card, it was gone.”

“So the burglar must have learned the winning number before your grandfather did,” Ruth Rose said.

Lucky nodded. “Lottery winners are announced on TV every Saturday night,” he said. “The crook must’ve heard about it then.”

“So he snuck in here last night,” Josh said, “after he saw it on TV. Did he break a window or anything?”

“Wouldn’t have to,” Lucky said. “The back-door lock hasn’t worked in years. The guy walked right in!”

“Um, how much was the ticket worth?” Dink asked.

Lucky drooped lower into his chair. “Seven big ones,” he said.

Dink stared at Lucky. No one moved or spoke. Giggling and eating-lunch noises came from the kitchen.

Lucky nodded. “Gramps was so happy he could hardly talk,” he said. “But when I told him the card was gone, I thought he was going to cry.”

Lucky scooted forward in his chair.
“Do you guys think you can find the crook and get my ticket back? I can’t leave the house because I have to watch the kids.”

“What if it’s too late?” Ruth Rose asked. “Maybe the thief cashed in the ticket already!”

Lucky shook his head. “He can’t. Today’s Sunday, so the lottery place is closed. But he could do it when they open again tomorrow morning.”

Just then they heard a crash from the kitchen. Whispering followed the crash, then a chorus of giggling.

“Guess I better get back in there,” Lucky said. “I promised I’d take them sledding after lunch. So do you think you can help?”

A three-foot-tall redhead whirled into the room. “Stuart mushed my
banana!” the kid wailed. “And I didn’t do nothin’ to him!”

“Don’t cry, Freddie. We’ll make Stuie clean up that mushy banana,” Lucky said. He took Freddie by the hand and headed for the kitchen. “Call me, okay?” he said over his shoulder.

The kids let themselves out. Pal was asleep on the front porch, making little snoring sounds.

“So how are we supposed to find this crook?” Josh asked. “Where do we even start?”

From the porch, Dink looked over the front yard. The snow had been trampled where the O’Leary kids had been playing.

“If the crook was here last night, maybe he left a trail,” Dink said. “Let’s check out back.”

The kids tramped around to the back of the house. The O’Leary kids
had played only in the front yard, so the snow in the back was fresh and smooth. The yard was surrounded by tall pine trees.

“Look,” Josh said. A trail of footprints led to the back door from across the yard.

“The guy must’ve come out of those trees!” Dink said.

“And gone back the same way,” Ruth Rose said. “These footprints go in both directions.”

The kids followed the tracks into the trees. The footprints veered off to the right, and the kids went with them.

With his nose in the snow, Pal sniffed each footprint. Suddenly, he let out a woof.

Josh stooped down and picked something shiny out of the snow.

“What is it?” Ruth Rose asked.

Josh held out his mitten. He was
holding a piece of tinfoil that had been twisted into the shape of a small bow tie.

“Do you suppose the burglar dropped this?” Josh asked.

A few minutes later, they walked out of the woods onto Bridge Lane.

“No more footprints,” Josh said, glancing up and down the lane. “The thief could’ve walked anywhere from here.”

“Or driven,” Ruth Rose said. “Maybe the guy parked a car here, then hiked into the woods.”

The day was growing colder. A few big snowflakes started to fall. All three kids had pink cheeks and runny noses.

“Let’s get some hot chocolate at Ellie’s,” Dink suggested. “Then we can plan what to do next.”

It was a short hike down Bridge Lane to Ellie’s Diner on Main Street. The kids pushed through the door and stomped their snowy boots on Ellie’s rubber mat. Pal waddled along at Josh’s heels.

“Hey, kids. Hey, Pal. What’ll it be?”
Ellie asked from behind her counter.

The kids slid into a booth. “Hot chocolate,” Josh said, struggling out of his down jacket. “With about a mile of whipped cream on top!”

While they waited, Dink thought about what Lucky had told them.

“Guys, anyone watching TV Saturday night would know the winning numbers, right?” he said. “But how did the thief know that the winning ticket was inside Lucky’s Christmas card?”

Just then Ellie came over. “Hot stuff!” she said, setting three tall mugs on the table. Each was topped with a small mountain of whipped cream and dotted with chocolate sprinkles.

“Don’t burn that cute nose, Josh,” Ellie added as she turned away.

Josh blushed, then licked the top of his whipped cream.

Dink blew on his hot chocolate. “Anyone got an idea?” he asked.

Dink fished in his pocket for a quarter. “Let me out, guys,” he said. “I’m gonna call Lucky.”

A Winter's Date by Sasha Brümmer, Jess Epps
Rigadoon by Louis-ferdinand & Manheim Celine
McKenzie, Cooper - Thanksgiving in Sanctuary (Welcome to Sanctuary 5) (Siren Publishing Ménage Amour) by Cooper McKenzie
Practicing Peace in Times of War by Pema Chödrön
Marrying Winterborne by Lisa Kleypas
Love of Her Lives by Sharon Clare
Not My Will and The Light in My Window by Francena H. Arnold
Coveted (Charming Bastards #2) by Lexie Davis
Blood of the Pure (Gaea) by Sophia CarPerSanti
Poisoned Politics by Maggie Sefton
Our partner