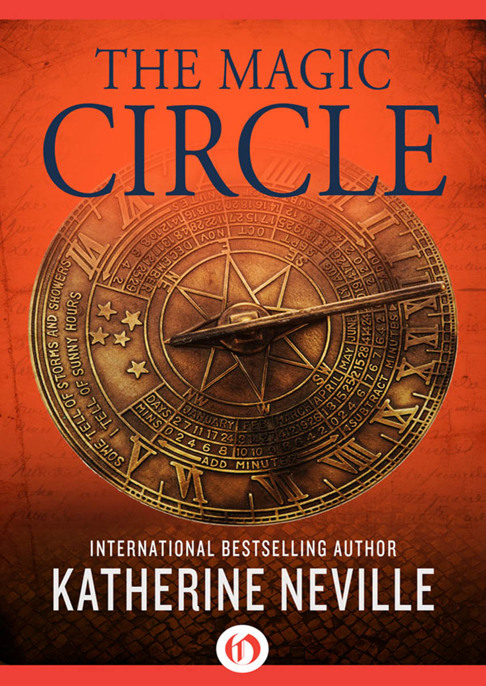 BE THE FIRST TO KNOW—

PRAISE FOR THE WRITING OF KATHERINE NEVILLE

“A fascinating piece of entertainment that manages to be both vibrant and cerebral.… Few will find it resistible.” —
Los Angeles Times Book Review

“Readers thrilled by
The Da Vinci Code
will relish the multilayered secrets of
The Eight
.” —Matthew Pearl, author of
The Dante Club

“A feminist answer to
Raiders of the Lost Ark
.” —
The Washington Post Book World

“The female counterpart to Umberto Eco’s
The Name of the Rose
… impossible to put down.” —
Boston Herald

“Never a dull moment, and [Neville] makes it all the more plausible because of her intimate knowledge of how international banking works.… [Her] book churns up wave after wave of excitement.” —
The New York Times Book Review

“Filled with intrigue … Neville keeps the novel moving at a fast pace.” —
The Denver Post

Time itself is a circle, everything recurs
.

What goes around comes around
.

—Motto of the Hell’s Angels

And they do not know the future mystery,

And they do not know what is going to happen to them
,

and they will not save their souls from the future mystery
.

—
The Dead Sea Scrolls
, prophecy of the Essenes

Now has come the last age of the song of Cumae
.

From the renewed spirit of the Ages a new Order is born
.

Now the Virgin returns, the reign of Saturn returns
.

Now a new generation is sent down from heaven on high
.

It was just before dusk. The volcanic Lake Avernus, high above Cumae, seemed to float in the air, partly veiled with a thin metallic haze. Between the patches of mist, the lake’s glassy surface mirrored opalescent clouds scudding across the crescent sliver of the moon.

The walls of the crater were wild with scrub oak, changing color from bloodred to purple in the descending twilight. The aroma of the dark sulfurous lake filled the air with a sense of danger. The very landscape of this ancient, hallowed spot seemed to be waiting for something, something that had been foretold for thousands of years. Something that was about to happen tonight.

As the darkness deepened, a figure slipped stealthily from the trees bordering the water’s edge. It was followed swiftly by three others. Though all four were dressed in sturdy leather breeches, jerkins, and helmets, it was clear by form and bearing that their leader was a woman. Over her shoulder she carried a pickaxe, a roll of oiled tarpaulin, sturdy rope, and other climbing gear. Her male companions followed silently, skirting the rim to the far side of the lake.

The woman moved back into the shadows, where a thick cluster of trees camouflaged an overhanging cliff. In darkness, she felt along the sheer face of vine-covered rock until she’d once more found the hidden crevasse. Pulling on heavy gloves, she loosened the rubble she’d so carefully replaced earlier. Her heart pounded as she slipped sideways through the narrow cleft in the rock, followed by her three companions.

Inside the cliff, the woman quickly unrolled the tarpaulin and, with the help of the others, stuffed it into the crack. When not even the smallest trace of light from the cave could be observed outside, she pulled off her metal helmet and lit the carbide miner’s lamp affixed to it. Tossing back her mane of blond hair, she gazed at her three rugged companions, whose eyes glittered in the lamplight. Then she turned to look at the cave.

Carved from the lava rock, the walls of the vast cavern rose more than one hundred feet above them. It took her breath when she realized they stood at the edge of a sheer cliff that dropped off into the pitch-black void. She could hear the sound of rushing water, from what seemed hundreds of feet below. This was the passage that had once led those seeking the mysteries deep within the bowels of this extinct volcano. This was the legendary place sought by so many over so many centuries, the cavern that had once served as home to the most ancient of all prophets: the Sibylline oracle.

Now, as she shone the lamp across the glistening walls, the woman knew there could be no mistaking what she’d found. The cave was exactly as described by those who’d visited here from earliest times—Heraclitus, Plutarch, Pausanias, and the poet Virgil, who’d immortalized this grotto in verse as the site of Aeneas’s entry into the underworld. Indeed, she knew that she and her three comrades could well be the first to have laid eyes on this fabled spot in two millennia.

When the emperor Augustus had seized power in Rome in 27 B.C., his first act had been to round up all copies of the books of her prophecies, called the Sibylline Oracles. He’d burned any he deemed “inauthentic”—those that did not support his tenure, or that prophetically heralded the return of the Republic. Then he’d ordered the Cumaean grotto sealed. Its official entrance, located not here but at the base of the volcano, was buried beneath a mountain of rubble. All trace of the famous cave’s existence had been lost to mankind. Until now.

The young woman set down her gear and once again pulled on her mining helmet with its small beacon of light. Extracting from her leather jerkin the crudely drawn map she’d brought, she handed it to the tallest of the three men. She addressed him aloud for the first time.

“Aszi, you will come with me. Your elder brothers must remain here and guard this entrance. If we can make no progress below, this crevasse will be our only avenue of escape.” Turning to the sheer cliff, she added undaunted, “I shall make the first descent.”

But he’d taken her by the wrist. His handsome face searched hers with great concern. Then he drew her to him and he gently kissed her forehead.

“No, let me go down first, Clio,” he said. “I was born on the rocks, you know,
carita
, I can climb like a goat. My brothers will lower you after me.” When she shook her head, he told her, “No matter what your father sketched out on this map before he died, it’s just one man’s scholarly opinion, formed from reading dusty books. Through all his travels, your father could never find the place. And you know well that oracles are often dangerous. The one at Delphi kept a brood of deadly pythons in her cave. You can’t know what we’ll find in the shrine you imagine is down there, in the dark.”

Clio shuddered at the thought, and the two strapping men nodded in support of their brother’s bravery. Aszi lit a second lamp, which he clipped onto his own helmet. The men secured the heavy rope to a rock and their younger brother, with only his bare hands on hemp, used his hobnailed boots to clear the wall and vanished with a brief, flashing smile into the darkness.

After what seemed a very long while, the rope swung loose, so they knew he had touched bottom. Clio passed her own rope between her legs to form a harness, which the brothers secured to the main line as double protection if she slipped. Then she, too, went over the side.

As Clio descended the sheer rock face, alone in silence, she studied the schist in the light of her lamp as if it contained the key to some riddle. If walls had ears, she thought, this one might reveal thousands of years of mysteries. Just like the Sibyl herself, a woman who could see all of the future and the past.

The oldest oracle in history, a woman who lived in many lands over dozens of generations, the Sibyl was born on Mount Ida, from which the gods once overlooked the war on the plains of Troy. More than five hundred years before Christ, the Sibyl traveled to Rome, where she offered to sell to King Tarquin the books of her prophecies spanning the next twelve thousand years. When he refused to meet her price she burned the first three volumes, then the next three, until only three books were left. Tarquin did buy these, and he enshrined them in the Temple of Jupiter, where they remained until that structure, too, burned to the ground, in 83 B.C., along with its precious contents.

The Sibyl’s vision was so profound and far-reaching, she had been granted any wish by the gods. She asked to live for one thousand years, but she forgot to ask for youth. As the end of her life approached, she had shrunk so small that nothing remained but her voice, which still prophesied from a little glass ampulla placed in this ancient cave of the mysteries. People traveled from far and wide to hear her song—until Augustus silenced her, for eternity, with Neapolitan clay.

Clio hoped beyond hope that the information her father had gleaned from his wealth of readings in ancient texts, a vision he’d only really understood on his deathbed, would prove true. Whether true or not, to follow the overriding wish of a dying man had already cost her everything she’d known in her young life.

When she reached bottom, she felt Aszi’s strong hands grasp her waist, helping her to gain her footing on the slippery rocks that bordered the onrushing underground river.

They made their way for more than an hour through the caverns beneath the volcano, following the directions her father had laid forth on the map. At last they came to the hollow, high in the rock, beneath which the Sibyl’s successors, young country girls, had for centuries sat on a golden throne—now a mass of crumbled stones—transmitting the prophecies passed down through them from the mind of the ancient goddess.

Aszi stopped beside Clio, then he unexpectedly bent to her, and he kissed her on the lips. He smiled. “You are nearly free,” he said.

Without another word he bounded up the crumbled pile of rock to the hollow, scaling the last length of cliff with his hands. Clio held her breath as he gained purchase against the rock with his boots and she saw him stretch his arm to reach his hand into the high hollow, feeling about in the dark hole above his head. After a long moment he drew something out.

When he returned, he handed it to Clio. It was a shimmering object, like a tiny vial, not much larger than her palm. Clio had never believed that the Sibyl’s voice was contained in an ampulla, but rather that the ancient vial held her prophetic
words
. Her prophecies, Plutarch had said, were written on small bits of metal, so light and fragile that, when released, they were borne away on the wind.

Clio carefully opened the vial and the tiny leaves tumbled out into her palm, each the size of a fingernail and each inscribed in Greek. She touched one leaf and looked into Aszi’s dark purple eyes gazing into her own.

The Technologists by Matthew Pearl
Stable Manners by Bonnie Bryant
Ghost Soldiers by Michael G. Thomas
The Assyrian by Nicholas Guild
Letters to Katie by Kathleen Fuller
Valor of the Healer by Angela Highland
Banquo's Son (A Crown of Blood and Honour Book 1) by T. K. Roxborogh
Impervious (City of Eldrich Book 1) by Laura Kirwan
The Cleaner by Paul Cleave
Running in Fear: Cupid's Venom by Trinity Blacio
Our partner