Read The Magic Half Online 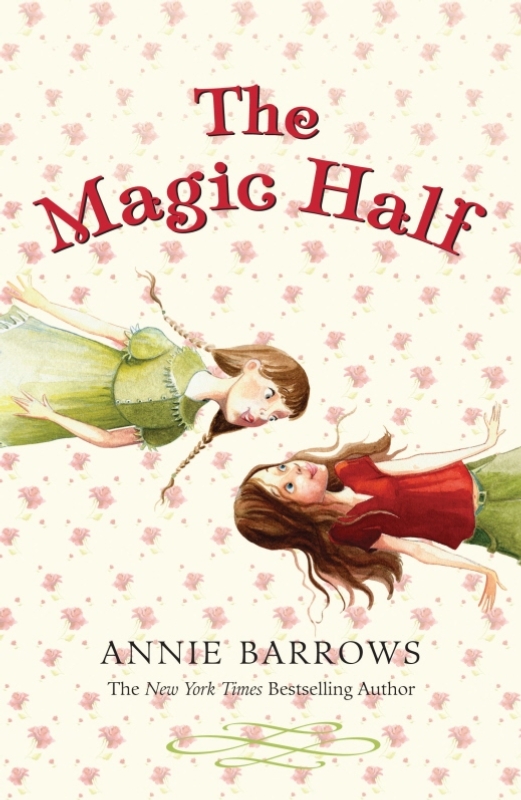 O
NLY
M
IRI
HAD NO TWIN
. People always said, “Two sets of twins! That must have been quite a surprise!” They would smile at Miri’s parents and shake their heads in wonder.

When she was younger, Miri had been proud of it. After all, as her father loved to remind them, only one in fifty thousand families had two pairs of twins. It was like being world champion of something. But after a while, Miri noticed that none of the smiling people ever looked at her. Their eyes moved from Ray and Robbie on one side to Nell and Nora on the other, slipping right over Miri in the middle.

“What about two pairs of twins and an extra?” Miri had asked once. She was curled up on the old blue couch in her father’s cozy office. “How many families have that?”

Her father had turned a slow circle in his swivel chair before he answered. “I don’t think they have statistics like that, baby. But you’re part of a special family.”

Ha, she thought, burrowing into the faded pillows. I’m just the extra, not the special.

Now the couch was gone, and she missed it. It had been sold, along with all the other things that Miri’s mother had decided weren’t good enough to move to the new house. It would probably be months before the new owner of the couch discovered that Miri had cut a hunk out of the bottom of one of the cushions to remember it by. Miri smiled craftily at herself in the bathroom mirror.

She had to admit that the new house wasn’t all bad. The bathroom mirror was tinted pink, for instance, which made her look good. The bathroom door locked, too. Since they moved, Miri had spent a lot of time in there. “Hello, me,” she said pleasantly to her pink reflection. She had toothpaste on her nose. She wiped it away, and a little breeze wafted a piece of hair over her forehead. The new house was full of breezes that seemed to come from nowhere. “We’re going to freeze this winter,” Miri told her reflection. Like an answer, another gust ruffled her hair.

Miri shook her half-straight, half-curly hair over her face. Her glasses glinted through the strands, so she took them off.
I’m the Wolf Princess,
she thought,
cursed to take on wolfish form when the moon grows full.
My terrified family locks me in the bathroom, fearful of the
destruction I may cause.
Miri paused to snarl wolfishly and then continued,
Shut up and forgotten, I spend years
in solitude, eating bread that my family shoves under the
door. But one night, as the full moon rises, I escape out the
window
—Miri squinted at the bathroom window. She thought it looked big enough—
and tear through
the countryside, causing mayhem among the villagers. Only
one person is brave
—
brave enough to pursue the Wolf
Princess
—
and his name is
—

“Miri!” her mother called down the hall. “Have you seen the girls?”

Miri put her glasses back on. “No.”

There was a pause. “What are you doing in there?” asked her mother, outside the bathroom door now.

“Nothing.”
Even in her human guise, the Wolf
Princess had long, silvery hair that shone strangely in the
moonlight.

“Come down and have some breakfast, then.”

Farewell, Wolf Princess,
said Miri silently and opened the door. Her mother looked at her with a questioning smile. “You okay?”

Her mother considered. “At sixty, yes. At eleven, no.”

The big, square kitchen, filled with summer light, was empty. But Nell and Nora had been there: an almost-empty ice-cream carton lay in a thickening mint-chip puddle on the counter. Miri’s mom walked to the stove and poured herself a large cup of coffee. She contemplated the mess gloomily. “Those girls are a menace,” she said.

Miri stood next to her. “It’s not so bad,” she said. “Remember the time they cut the eggs with scissors?”

Her mother giggled. “You’re right. That was worse. I guess they’re trying to tell me that they’re tired of cereal.” She opened a cupboard and scanned the shelves. “There’s nothing else to eat, though. I should go to the store today. But what I really should be doing is setting up my office.” She tapped her fingers against the cupboard door. “I wish your daddy wasn’t at that stupid conference. I don’t see why
anybody
needs to talk about geothermal energy for ten days, much less a man who— Oh my God!”

Miri looked up, startled. Her mother was gazing in horror at the back porch. Standing outside the screen door were Ray and Robbie. Their T-shirts were streaked with mud and dust. Their hair was thick with cobwebs, and their faces, underneath smears of grime, were blazing with enthusiasm. “Hey!” Ray yelled. “You’ll never guess what!”

“What happened to you? What are you doing out there? Don’t come inside!”

“We met a guy! Who told us!” Ray hollered, as if they were miles away instead of just on the other side of the screen.

“
Stop!
” ordered their mother. She looked sternly at her sons. “Ray, please stop yelling. Robbie, can you tell me—quietly—why you’re filthy and what stolen stuff you’re talking about? And who this guy is?” She nodded at Robbie. “Begin.”

Miri’s mother was on a campaign to get Robbie to talk more.

Robbie was having none of it. He jerked his head at Ray. “Let him tell.”

Ray smirked at his mother and continued, “As I was saying, we got up superearly this morning, like so early the sun was rising, cause we’re going to do track when school starts, and we thought we should start training today. So we decided to run to the creek, swim around in the swimming hole, and run back.” He slapped himself proudly on the stomach. “Cross-training.”

“And then?” prompted his mother.

“And then,” Ray continued, “we ran through the woods. We did great. Except Robbie tripped on a root or something and cut himself because he’s a dweeb.” Robbie smacked his brother on the back of the head. “Get out,” said Ray, smacking him in return. “Anyway, we were trying to run without any sound, like those Indian dudes, but Robbie made a lot of noise when he fell and Mr. Guest heard us.”

Miri imagined running from tree to tree, silent as air. Maybe sometime she could go along with them. “Who’s Mr. Guest?” she asked.

But Ray was continuing, “He said we scared all the fish away when we were running around in the woods, even though we didn’t really make that much noise. Anyway, he’s this old guy, like really old, who’s lived in the valley for a million years, and you know what he says? He says—”

“He says there’s stolen stuff under our house!” Robbie blurted.

“Under this house?” said Mom doubtfully.

“Well, it might be under the house,” Ray said. “Mr. Guest said ‘on the property.’ But no one knows where. He says way back in the twenties or something there was a guy who lived here who was a thief, and he buried the junk he stole here, and after he was gone, nobody ever found it. It could be jewelry, he said. Isn’t that
sick?
”

His mother smiled at him. “That’s pretty sick, all right.”

“It better not be,” said Mom firmly. “So—let me guess how you got all those cobwebs in your hair. You crawled under the house to look for this stuff. Right?”

“Yeah. So far, though, we only found a rake,” said Ray. “We’re going to look some more after breakfast. We’re starving,” he added.

“I’ll get you all some cereal,” said Mom. “But boys, I’m not so crazy about the idea of you messing around under the house. There’s a lot of nasty stuff under houses, and your father will have a fit if you knock out any of those furnace ducts. Why don’t you look in the yard?”

“Mom!” groaned Ray. “A thief wouldn’t put his loot out in the yard where anyone could find it. That’d be stupid! He’d have buried it under the house, in a hidden place.” Robbie nodded in agreement.

“You know,” said Mom hopefully, “there was a barn on this property a long time ago. It was somewhere out in back, near the apple trees, I think. He could have buried it in the barn.”

“Mom! Come on! We’re not complete morons. We won’t touch the furnace, we promise. Just let us look under the house. Please!”

Their mother sighed. “All of my children are horribly stubborn.” She yanked gently on Miri’s hair. “All except you, thank goodness. Okay, boys, you can look under the house, but carefully. Don’t touch the furnace or the water heater. And watch out for spiders.”

“Can I help?” asked Miri eagerly.

Ray and Robbie glanced at each other. Then Robbie gave her one of his wide, sweet smiles and said, “Maybe later you can help, Miri. Today, Ray and I want it to be just us. Okay?” Saying no to Miri was always his job.

“Now guys, that’s not right,” objected Mom. “If there’s buried loot, it’s as much Miri’s as yours. But honey,” she turned to Miri, her face pleading, “it’s your turn to look after the girls this morning. The boys will do it this afternoon—oh, don’t give me that look, you two—and Miri, you can go look for buried treasure then. But this morning, I have to get my office unpacked. My syllabus is due next Tuesday, and I can’t even
find
most of my files.”

Miri nodded, but she said nothing. That wasn’t what she wanted—to go hunting alone. She wanted to crawl under the house with Ray and Robbie. She wanted to dig in the mysterious dirt. She wanted to hear her shovel knock against a hard surface and call out, Hey, guys, I think I hit something. She wanted them to come rushing over to her spot and scrape frantically, all three of them, until the dull shine of a metal box appeared in the flashlight beam. She wanted them to let out an admiring breath and say, Wow, Miri, you did it. But that’s not what they wanted. They just wanted each other.

Her mother slipped an arm around her shoulder. “You know how much I appreciate it, honey. Tell you what. Next week, after my deadline, we’ll go hunting together. We’ll find that old treasure before the boys do.”

“S
TOP YELLING
about that stupid doll!” It was Ray’s voice.

“Sierra is my baby and I’m the mommy!” Nell was screeching.

“Who
cares
about your ugly doll?” thundered Robbie.

His Most Exquisite Conquest by Emma Darcy
Tied - Part Four (The Tied Series) by Callahan, Ellen
In Search of the Niinja by Antony Cummins
Macbeth and Son by Jackie French
The Goblin King by Shona Husk
Seven Scarlet Tales by Justine Elyot
Stuff My Stocking: M-M Romance Stories that are Nice and Naughty by Various Authors
Assassin's Code by Jonathan Maberry
Melting The Ice by Amy Leigh Napier
Novel 1968 - Brionne (v5.0) by Louis L'Amour
Our partner