Read The Man Who Ended the World Online

The Man Who Ended the World 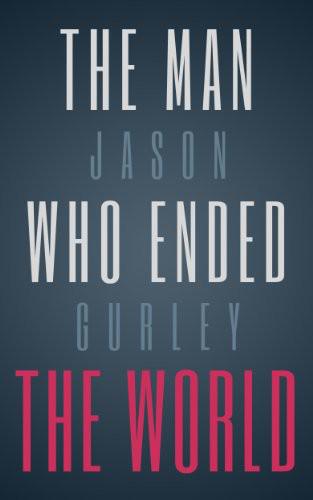 The Man Who Ended the World

The real writer in the family

THE MAN WHO BURIED HIMSELF

THE MAN WHO PULLED THE TRIGGER

THE MAN WHO LIVED WITH GHOSTS

In a way, he had been waiting for this moment since he was seven.

He leans forward, scoots to the edge of the sofa, clasps his hands between his knees.

The wall of television feeds is filled with the faces of reporters and anchors. They're all serious. Some of them don't believe this is really happening. He can tell. He can barely believe it himself.

But a few of them -- they know. He can see it in their eyes.

When it happens, it happens with such force, such speed.

There is no time even for their expressions to change.

Each of the feeds goes black, each picture replaced by floating words.

He had wondered if he would feel it. Would the walls tremble? Would they hold? Would the power go out? Would he die in darkness?

None of this happens. 'The lights don't even flicker around him.

Life goes on, but only one life.

The Man Who Buried Himself

Henry is walking home from school when he first sees the man who will end the world.

There isn't anything special about the man. He is of average height. His hair is brown. His eyes are brown. His posture is stooped, although so slightly one might not notice right away. He wears ordinary blue jeans, an ordinary blue T-shirt, and an ordinary blue windbreaker. His stride is perfectly normal, without any hiccups or interruptions. He walks with his hands swinging gently at his sides.

There is absolutely nothing noteworthy about the man.

But Henry shrugs his backpack a little higher on his shoulder, and stands with one hand in his pocket. He chews a little on his lip, and watches the man for a time.

The stranger looks through the window of Miss Peel's book shop, lingers a moment, then pushes through the creaky old door and goes inside.

Henry finds an out-of-the-way spot behind a recycling bin and waits. Between the slats of the blinds that hang over the shop windows, he can see the man nosing around inside. The man walks slowly up one aisle and down another. He stops and picks up a paperback, turns it over, puts it back.

Henry thinks he should know the man, whose face is familiar in an unexceptional sort of way. A friend's dad? A substitute teacher? Maybe he's one of the school district's bus drivers?

Abruptly the man heads for the door. Henry can hear Miss Peel call, Thank you, but the man doesn't hear, or doesn't care. Henry squishes himself against the metal bin as the man passes by, making himself as small as possible.

His inability to place the stranger's face was a minor annoyance at first, but after watching the man for a few minutes, the annoyance has grown into a full-fledged, got-to-scratch-it itch.

So when the man comes to the end of the block, Henry hefts his backpack, slides both arms into its straps, and follows.

In a town like Bonns Harbor, with fewer than twenty thousand residents, Henry thinks it is strange that he cannot figure out who the stranger is. He doesn't know that many people to begin with.

The man walks fifteen or twenty yards ahead of Henry, who suddenly worries about being detected. He ducks into every doorway on the block and peers around corners and windows at the stranger.

Sorry, he whispers when his behavior nearly topples a young woman's baby stroller.

Please be careful, she replies, and Henry says, Shhh. The woman frowns at him. He darts around her, spies a parked Chevy pickup, and runs in a conspicuous crouch to hide behind its bumper. He exhales, counts to three, then leans over until he can see past the truck's tailgate.

The woman with the stroller has ventured into an intersection. A Bonns Harbor Light and Power truck has stopped to allow her to cross. People bustle in and out of shops and across the street. The sound of small town life is almost pleasant. A dog barks, then barks again.

The stranger, however, has vanished.

Henry jumps up, giving away his location, but the man is nowhere in sight.

And then, just like that, the stranger reappears, straightening up and smoothing his ordinary blue jeans the way a man does when he's just finished tying his shoe.

Henry drops to his knees and presses himself to the side of the pickup, breathing heavily. He makes a crackling sound with his mouth.

Krzhhhhkkkttk, he says into his hand. Agent almost detected, but subject seems unaware.

The stranger resumes his course through town, weaving left to examine store windows, veering right to avoid other pedestrians. He doesn't seem to acknowledge them otherwise. There are no nods, and Henry can sort of tell from the man's posture that he's not smiling.

Some people you can just tell they're not smiling.

Krzhhhtkk, he hisses. Subject in motion.

When the man has walked a reasonable distance ahead, Henry slides to his left, still flattening himself against the truck, and like water folds over the curves and corners of the truck until he is hunched over beside the passenger fender.

This makes him visible to the entire street, and a couple of people watch him, amused. But Henry pays no mind, at least until a yellow Volvo lumbers by. The tires crackle and seem to cough gravel. The driver notices Henry and leans on the horn. YOU SHOULDN'T PLAY IN THE STREET, the stern Volvo grille seems to say. Henry flaps his hands wildly at the driver to shush him.

Henry snaps up and risks a peek over the roof of the Volvo to see if the stranger is looking his way.

The stranger is not. He's just walking, farther ahead now, still slightly stooped, still drawing nobody's attention. He hasn't noticed Henry's antics, or Henry at all.

Some people you can just tell they don't notice things.

The Volvo swings past, the driver glaring down at Henry. But Henry pays him no mind, and trudges after the stranger again.

But the inattentive and ordinary man begins to take on a different air as he approaches the edge of downtown. In one horrifying moment, the stranger executes a sudden spin that catches Henry flat-footed in the middle of the sidewalk. The stranger looks this way and that, and Henry nearly pees himself.

But the stranger seems to look right through Henry.

The stranger's shoulders relax, and his hands find his pockets, and he begins strolling up the street again.

Nobody notices eleven-year-old boys. They're practically everywhere. They're like trees, or red Jeeps, or discarded shoes.

Henry the spy is too shaken to radio in.

He lags back and follows at an even greater distance, too disturbed by the other man's anti-spycraft moves to employ any flair. He lingers so far behind that the man becomes insect-sized on the street far ahead.

Henry pretends to look at the display in the game shop window, distracted a little by the little diorama that Glenn, the shop owner, has created. There's a little Tyrannosaurus rex stomping through a tiny small town, tail precariously close to toppling a miniature water tower with BONNS HARBOR BEARCLAWS emblazoned on its side. Little toy cars and plastic figures scatter before the dinosaur, and red-and-yellow cellophane, lit with flickering LEDs, sets several small buildings ablaze.

He almost forgets his mission, and when he turns back to survey the street again, his heart sinks for a moment until he locates the man, surprisingly far away now, turning the corner at Harper Street.

The stranger is leaving the downtown strip behind, and heading for the neighborhoods near the railroad tracks.

For as long as Henry can remember, the junkyard at the edge of town has always been abandoned, its treasures secured behind a sheet metal gate strung up with heavy chains and a threatening lock. This is not to say that Henry has never been in the junkyard. Eleven-year-old boys are not thwarted by the trappings of grown-up security.

But this time, there's no need for Henry to peel back the loose boards on the Silver Cloud Lane side of the junkyard. The stranger pats his pockets and produces a key, and to Henry's amazement, unlocks the gate.

This is huge, Henry thinks. Someone bought the junkyard!

Henry cannot exactly say why this is huge, but events of such magnitude rarely happen in Bonns Harbor. The sale and purchase of a tired scrap yard rates very high for an eleven-year-old boy indeed.

He waits until the gate has closed again, and then he dashes to the Silver Cloud side of the property. The boards are still there, still loose, still forever damp and porous with rot. Henry doesn't slip inside the junkyard just yet. For now, he pulls the boards back only enough to open a sightline, and he watches.

The yard is still populated with discarded automobiles and diseased washing machines and hollowed-out refrigerators and crumbling oil drums and twisted bumpers and even a soot-stained smokestack from an eighteen-wheeler. There are coiled and scarred springs the size of fire hydrants. Henry and his friends have played here enough times to know that some of the cars are brittle, the metal eaten nearly completely through by weather and rust, and with a careful swing, can be punched through with a baseball bat or a metal pipe.

The stranger drops a key back into his pocket, and strolls casually across the yard to one of those cars, a 1994 Chevy Corsica. The car, resting on top of a larger pile of assorted metallic junk, used to be wine-colored and now is just a husk of orange steel and bleached plastic. The windows are mostly knocked out, and broken bits of bluish diamonds are sprinkled in the window gutters and across the seats. Henry knows this because he and his friends were responsible for breaking those windows, as well as the windows of most of the other cars in the yard.

Henry watches, puzzled, as the stranger lifts the Corsica's trunk. The lid groans and squeals, and the stranger winces. So does Henry.

Then, to Henry's amazement, the stranger carefully steps onto the car's bumper and climbs into the trunk.

And, with some effort, pulls the lid shut from the inside.

Henry yanks the boards back and runs into the yard, his concern at being discovered forgotten. The Corsica just sits there, not bothered at all by the human trapped in its bottom.

Henry bangs on the trunk with a flat palm. Hey, he says. Hey! Mister, are you alright? Can you hear me?

There's no response from within.

I'll open it up for you! he shouts.

The trunk is locked, so Henry looks around and spots a bent metal rod. He pushes one end into the space between the trunk and the bumper, and leans on the rod. But nothing happens. The trunk doesn't budge.

For ten minutes Henry tries and fails to break into the car. He bangs on the car with his palms. Mister? he yells. I can't get in. Are you alright in there?

As the sun goes down, he gives up and goes home.

When Johnny Came Marching Home by William Heffernan
A Study in Death (Lady Darby Mystery, A Book 4) by Anna Lee Huber
The Imposter by Judith Townsend Rocchiccioli
Kingdom Lost by Patricia Wentworth
Daniel Taylor Between Two Worlds by Monica Davis
Forever Yours, Sir by Laylah Roberts
Maid for Murder by Barbara Colley
The White-Luck Warrior by R. Scott Bakker
Knightless in Seattle by Jill Jaynes
Starman Jones by Robert A Heinlein
Our partner