Read The Man Who Made Husbands Jealous Online

The Man Who Made Husbands Jealous 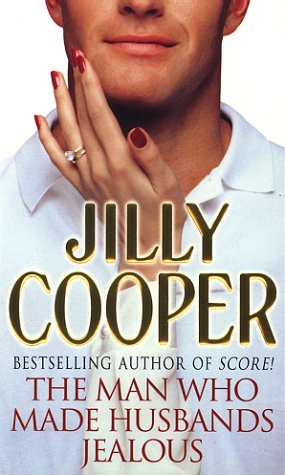 The Man Who Made

Lines from 'Naked in the Rain' by McBroom and Glover

reproduced by kind permission of

Lines from 'The Last Night of the World', from the Musical Miss

Saigon by Alan Boublil and Claude-Michel Schonberg. Lyrics by

of the Copyright Designs and Patents Act 1988

All the characters in this book are fictitious and any resemblance to actual persons, living or dead, is purely coincidental

Conditions of Sale 1. This book is sold subject to the condition that it shall not,

by way of trade or otherwise, be lent, re-sold, hired out or

in which it is published and without a similar condition

including this condition being imposed on the subsequent

2. This book is sold subject to the Standard Conditions of Sale of

fixed by the publishers for the book.

and in New Zealand by Transworld Publishers (NZ) Ltd,

To Emily with love and gratitude for so much happiness.

One of the delights of writing The Man Who Made Husbands Jealous has been the kindness and enthusiasm of the people who helped me. These include in particular John Lodge, Managing Director of Lodge Securities, who initiated me into the mysteries of highly sophisticated security systems; trainer Nigel Twiston-Davies and his wife Cathy, who took me racing and allowed me to spend several days at their yard; Emily Gardiner and Alicia Winter who advised me on the pop music front; and Ian Maclay, the former Managing Director of The Royal Philharmonic Orchestra and the orchestra themselves, who provided me with much joy and enlightenment, both at rehearsal and concerts.

I should also like to thank Martin Stephen for telling me about headmasters; composer Geoffrey Burgon and master cellist Bobby Kok for talking to me about music; Andrew Parker-Bowles and John Oaksey for being brilliant about racing; Shirley Bevan for advising me on the illnesses of horses; Simon Cowley for walking the Cheltenham course with me in a deluge; and Raymond and Jenny Mould for inviting me into their box to see Tipping Tim win gloriously at Cheltenham. Peter and Alexandra Hunter and Sally Reygate also told me wonderful stories about their horses Esperanta and Regal, both now sadly departed.

Many other people helped me. Like those referred to above, they are all skilled in their own fields, but as I was writing fiction, I only followed their advice as far as it fitted my own story, and their expertise is in no way reflected by the accuracy of this book. They include:

Dog is for Life Not Just for Christmas'.

The subconscious mind works in strange ways. Almost from conception, The Man Who Made Husbands Jealous was set in Paradise, a mythical village in the mythical county of Rutshire. Paradise Village in the book has a population of around eight hundred, an Anglo-Saxon church, a pub, a restaurant, a handful of shops and lies on a river at the bottom of a beautiful valley surrounded by steeply sloping woodland studded with beautiful houses.

During a driving lesson, when the book was well under way, I told my instructor, Peter Clarkson, about my fictional village. Did I know there was a Paradise in Gloucestershire, he asked, and promptly drove me to a tiny hamlet which looked down into a valley, even more beautiful than the one of my imagination. Charles II is alleged to have named the place Paradise. Arriving by night while escaping from the Roundheads, he gazed out of the window the following morning and asked in rapture if he had arrived in Paradise. As I had written so much of the book by then, and because the two 'Paradises' are totally different, except in their rare beauty, I decided to keep the name, but would stress that no-one living nor any of the locations in Paradise, Rutshire, bear any resemblance or are based on anyone living or any of the places in Paradise, Gloucestershire.

I must also reiterate that The Man Who Made Husbands Jealous is a work of fiction and none of the characters is based on anyone. Any resemblance to any living person is purely coincidental and wholly unintended.

An author is only as good as her publishers. Mine have been magnificent. I would like to say a massive thank you to Paul Scherer, Mark Barty-King, Patrick Janson-Smith, of Transworld Publishers Ltd., and all their staff for their continued encouragement and advice while I was writing the book. Once it was delivered I had marvellous editorial advice from Diane Pearson, Broo Doherty and Tom Hartman. Nor could anyone have a more charming, merry or skilful agent than Desmond Elliott. I also owe a special debt of gratitude to my son Felix, who in January 1992 restored the gazebo at the bottom of the garden so I was able to write in blissful seclusion uninterrupted by doorbells or telephones.

Finishing a big book is tremendously exciting and consequently I owe a further huge debt of gratitude to my friends Annette Xuereb-Brennan, Annalise Dobson, Anna Gibbs-Kennet and Marjorie Williams for entering into the spirit by working late into the night typing huge chunks of the manuscript, and often correcting factual mistakes and fearful spelling. Ann Mills was equally marvellous at clearing up after us all without throwing away any vital scribbling.

Nor could the book have been written without the wonderfully soothing presence of my PA, Jane Watts, who listened when I was in despair, provided numerous

funny lines and spent hours collating and photostating THE manuscript.

Finally, I would most of all like to thank my family, Leo Felix, Emily, Barbara and Hero. All provided comfort tolerance and inspiration. Few writers are as privileged.

SEB AND DOMMIE CARLISLE The heavenly twins. Vastly    brave professional polo players, whose serious wildness has been tempered by the recession.

LADY CHISLEDEN An old boot and a pillar of

MRS COLMAN David Hawkley's secretary -nicknamed 'Mustard' by the boys because she's so keen on him.

MISS CRICKLADE Winner of the home-made

FERDINAND FITZGERALD Fat Ferdie. Lysander  Hawkley's best friend and minder. Estate agent and fixer who is riding the recession with a cowboy's skill.

DAISY FRANCE-LYNCH His painter wife, a friend of

BOB HAREFIELD Orchestra manager of the London Met. A saint.

HERMIONE HAREFIELD His seriously tiresome  wife. Rannaldini's mistress. One of the world's leading sopranos and an applause junkie.

LYSANDER HAWKLEY A hero of our time.

DINAH HAWKLEY An old soak, and the  widow of David Hawkley's much older brother, Alastair.

HEINZ A colourless assistant    conductor at the London Met.

THE REVEREND PERCIVAL A portly parson who confines HILLARY his pastoral visits to drinks  time.

BORIS LEVITSKY A glamorous, temperamental composer who defected from Russia in the eighties. Assistant conductor at the London Met and lover of red wine, red meat and red-blooded women.

RACHEL LEVITSKY His English wife. A concert pianist who has sacrificed her career to bring up two children: Vanya and Masha. Performs under her maiden name, Rachel Grant.

wife, who is finding to her cost that rough diamonds are not for ever.

MARCIA MELLING A susceptible divorcee, one of Rupert Campbell-Black's owners.

OSWALDO A colourful guest conductor of the London Met.

MR PANDOPOULOS Another of Rupert

MRS PIGGOTT Georgie Maguire's daily. Nicknamed Mother Courage because of her fondness for a pint of beer.

ROBERTO RANNALDINI One of the world's greatest  conductors. Musical director of the London Met and a very evil genius.

KITTY RANNALDINI His much younger third wife who runs his life like clockwork.

his second marriage: a handful in all senses of the word.

CECILIA RANNALDINI Rannaldini's second wife  and a world famous diva. Given to throwing plates and tantrums.

GUY SEYMOUR A bishop's son and Georgie Maguire's very decent and rather unlikely husband. Owner of London art gallery and nurser of talent.

child. MEREDITH WHALEN A highly expensive gay interior designer, known as the Ideal Homo because he's always being asked as a spare man for deserted wives at Paradise dinner parties.

Aelred's Sin by Lawrence Scott
Collateral Damage by Michaels, Fern
The Devil You Know by Marie Castle
The Repossession by Sam Hawksmoor
My Share of the Task by General Stanley McChrystal
The Romantic by Barbara Gowdy
Surrendering to the Sheriff by Delores Fossen
The Earl Next Door by Amanda Grange
Murder in the Palais Royal by Cara Black
Bartholomew 02 - How to Marry a Ghost by Hope McIntyre
Our partner