Read The Mutt and the Matchmaker: A Matchmaker Mystery Novella Online

The Mutt and the Matchmaker: A Matchmaker Mystery Novella 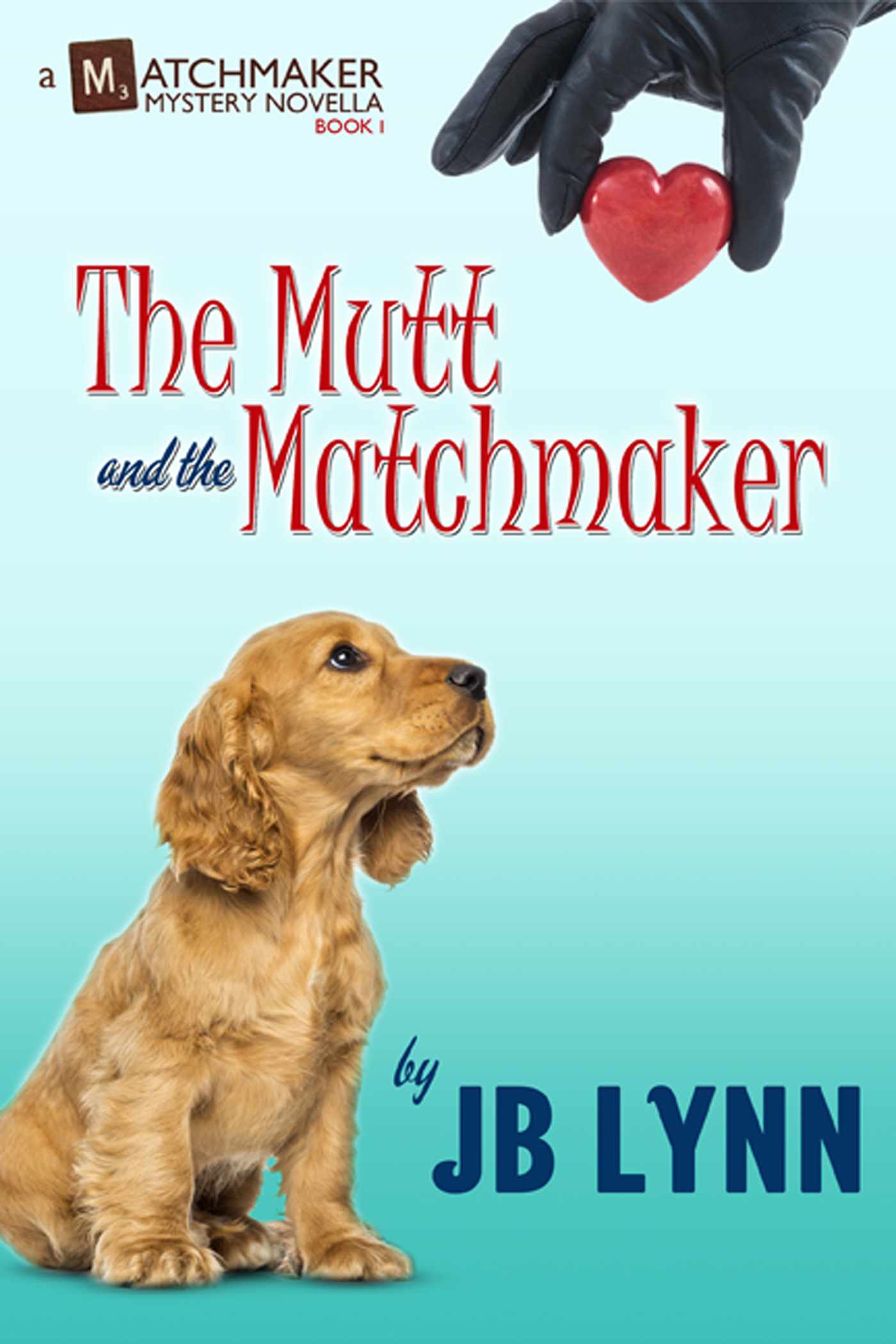 This is a work of fiction. Names, characters, places and incidents are either the product of the author’s imagination or are used fictitiously. Any resemblance to actual persons, living or dead, business establishments, events, or locales is entirely coincidental.

Interior design and formatting by The Eyes for Editing

This ebook is licensed for your personal enjoyment only. It may not be re-sold or given away to others. If you’d like to share this book (and the author hopes you’ll want to), please purchase an additional copy for each person. To obtain permission to excerpt portions of the text, please contact the author at
[email protected]

"If you love series such as Evanovich's Plum and Bond's Body Movers, you'll love Confessions of A Slightly Neurotic Hitwoman."

-A Chick Who Reads

“JB Lynn knows how to entertain readers. I can’t wait to see what she has in store for Maggie next!”

“Ms. Lynn writes stories that flow well, make you care about her characters, and make you want to read more. It’s a winning combination for a book.”

“…Lynn similarly and masterfully joins the genres of suspense and romance with a tale that is sure to please fans of both. Readers will be anxiously awaiting the next book in this series.”

OTHER TITLES BY JB LYNN

Confessions of a Slightly Neurotic Hitwoman

The Hitwoman Gets Lucky

The Hitwoman and the Family Jewels

The Hitwoman and the Neurotic Witness

The Hitwoman Hunts a Ghost

The Hitwoman and the 7 Cops

This story is gratefully dedicated to Tammy

“Is that like Bond, James Bond?” The woman on the other end of the phone call chuckled at her own joke.

Calling her insurance company to report someone had sideswiped her car in the middle of night, leaving the driver’s door inoperable, was not her idea of a fun time, but she’d lucked out with the cheery woman who’d answered her call.

“
Attitude is everything,
” her grandmother used to say.

The insurance company representative certainly had it in spades. Still, she managed to make a task Jane had dreaded an adventure. Especially toward the end of the call when the woman had asked oh-so-casually, “How do you feel about matchmakers?”

“Matchmakers?” Jane asked trying to figure out what that had to do with her car.

“Because I am one,” the woman told her. “And I’m pretty sure I’m supposed to match you up.”

Tom Hanlon’s life was going to the dogs.

Or at least one dog in particular.

There was only one woman in the world who could get him to do something that would make him look like a fool. With her twinkling eyes and tinkling laughter, she had him wrapped around her little finger and she knew it.  He’d do just about anything for Aunt Ruby.

Which was how he found himself striding down the street, trying to ignore the stares and titters of everyone he encountered. He held his head high, his chest out. He had nothing to be ashamed of.

There was nothing wrong with helping out an old lady who’d fallen on hard times. He’d agreed to Ruby’s request immediately when she’d told him about Mrs. Ciaffone’s dilemma. He was that kind of guy. The kind who helped out damsels in distress, no matter how old they happened to be.

But he wasn’t the kind of guy who could carry around a little white Maltese named Marshmallow complete with hot pink bows and a blinged-out rhinestone collar and leash without attracting attention. At least they couldn’t tell she smelled like honeysuckle.

Even when he wasn’t toting around the incongruous little dog, he attracted attention. Being six-four and a CrossFit enthusiast pretty much guaranteed him second glances, most of which were appreciative, but some were jealous, and a few were downright lascivious.

But he wasn’t getting those kinds of looks. Most people were amused, some snickered, and a few laughed outright or said something along the lines of, “Macho dog, dude.”

Finally reaching the dog park Mrs. Ciaffone had insisted Marshmallow needed to go to for socialization, Tom entered through the double gate system and gently placed the white ball of fluff on the ground and took off her leash.

She looked up at him quizzically as if unsure what he expected of her next.

Slowly she shuffled away, sniffing the ground.

“There you are,” a woman called happily. “I’ve been waiting for you, handsome.”

Tom was pretty sure she was talking to a dog, but he surreptitiously swept the area with his gaze, searching for the source of the voice.

He spotted her sitting on a bench, a dark-haired Latina beauty who seemed to possess some sort of internal sparkle.

She stared at him unabashedly. “Join me.”

He glanced over his shoulder to ascertain she was really talking to him.  When he looked back, she patted the bench seat beside her. She flashed a coy, beguiling smile.

Suddenly the trip to the dog park didn’t feel quite so bad.

He strolled over. “Hello.”

He blinked, taken aback by the cheesy pick-up line. “It’s my first time.”

“Oh yeah. You’re definitely the right one.” She sounded extremely pleased with herself. She extended her hand. “I’m Armani Vasquez.”

It was then that Tom realized the woman’s left hand and leg were misshapen and hung limply at her side. If he had to guess, he’d say her injuries were the result of some sort of accident.

With the recent stinging memory of being laughed at because of how he’d looked carrying Marshmallow, he was quick to meet her gaze and smile warmly, even though his “crazy chick” radar was going off. “Armani like the designer? I’m Tom.” He shook her good hand.

“A man of culture,” she teased. “I’ve been waiting for you.” She patted the seat next to her again.

Not wanting to hurt her feelings, he settled onto the bench. “Waiting for me?”

“I had the distinct feeling I was missing a message. I’m a psychic, you know,” she explained matter-of-factly.

Tom did his best to maintain a polite smile as he tried to figure out how to extricate himself from the bizarre conversation.

“I pulled seven Scrabble tiles earlier and they spelled out
dog park
… that or
god krap
,” Armani continued. “I figured dog park made more sense. I borrowed a dog, just in case I needed one, and came and waited.  Then, when I saw you, I knew you were the one.”

“The one?” Tom asked, despite his better judgment.

She nodded. “You’re looking for someone. Hunting for them, really.”

He looked at her sharply, wondering how she knew that. He’d done his best to act with secrecy and discretion.

Out of the corner of his eye, Tom spotted a Doberman Pinscher headed straight toward the Maltese in his care.  “Marshmallow!”

“Look out!” Tom leapt to his feet, rushing to throw himself between the two dogs.

He was too late.

The Doberman reached her before Tom could. The big dog sniffed the little one.

Marshmallow barked at it.

“Don’t antagonize it,” Tom warned, moving slowly toward the dogs only inches apart. His only plan at that point was to snatch up the fluffball and make a run for it. As plans went, it sucked.

“She,” Armani called from her bench. “That’s DeeDee. She’s with me.”

“There are rules about big dogs and little dogs interacting. Didn’t you see the sign? Call her off.”

“What for? She’s harmless. Look at her, she only wants to play.”

Tom peered at the big, brown dog. She didn’t seem to be exhibiting any aggressive behavior. In fact, she’d sprawled out on the grass and put her head on the ground between her paws as though to prove she was harmless.

“At home she plays with a cat and a lizard.”

“I don’t get it either, but it seems to work for them. Come back, Tom. Like I said I’m here to help you.”

Tom looked from one dog to the other. Marshmallow didn’t
look
scared.

“Trust me. I know these things,” the beautiful woman on the bench assured him. “I’m a psychic.”

Instead of obeying, the Maltese scooted past him, marched up to the Doberman, and licked her cheek. The big dog took off with the little dog chasing after her, nipping at her heels, in a joyous game of doggie tag.

Lunatic Revenge by Sharon Sala
Reckless Magic by Rachel Higginson
Beneath This Man by Jodi Ellen Malpas
The Book of One Hundred Truths by Julie Schumacher
The Big Picture by Jenny B. Jones
Girl Next Door by Alyssa Brugman
Seeking Vengeance by McDonald, M.P.
Second Hand Jane by Michelle Vernal
The Particular Sadness of Lemon Cake: A Novel by Aimee Bender
Reasonable Doubts by Gianrico Carofiglio
Our partner