The Mystery on Cobbett's Island 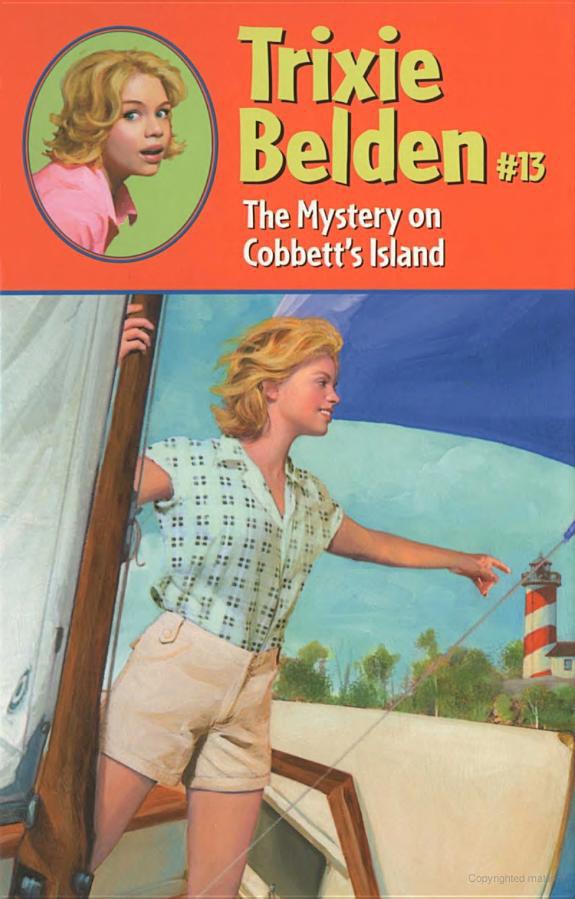 This is a reissue edition of a book that was originally published in 1964. While some words have been changed to regularize spelling within the book and between books in the series, the text has not been updated to reflect current attitudes and beliefs.

“Oh, Moms, do you know what?” exclaimed Trixie as she dashed into the kitchen, letting the porch door slam behind her, and almost knocking a lemon pie out of Mrs. Belden's hands.

Her mother carefully put the pie, piled high with golden meringue, out of the way in the pantry, and then straightening her apron, she smiled fondly at her daughter and said, “Yes, I know what; another step and you would have had no pie for supper tonight! Now try to calm down and tell me what has you so excited that you would risk ruining your favorite dessert.”

Trixie pushed back the blond curls from her damp forehead and, taking a deep breath, said, “Mrs. Wheeler has invited all the Bob-Whites to the beach for ten days!”

“To the beach!” said Mrs. Belden. “How wonderful! Tell me all about it,” she invited.

As she spoke, she brought over a bowl of cherries and sat down next to Trixie who had collapsed into a chair at the big, round kitchen table.

Trixie popped a cherry into her mouth. Her eyes were snapping with excitement. “Well, the Wheelers rented a house on Cobbett's Island for weekends this summer so Mr. Wheeler could go deep-sea fishing. Then, last week he found out he has to go to Brazil on business, and he wants Mrs. Wheeler to go with him.”

“Yes, she told me yesterday she hoped she'd be able to go because she's never been to South America,” Mrs. Belden commented, “but she didn't say anything about the invitation.”

“I guess South America is the only place she hasn't been unless it's the South Pole.” Trixie laughed. “She probably didn't mention the plans because they weren't definite until today.” She reached for more cherries as she continued. “Anyway, the Bob-Whites were all up at the clubhouse this afternoon trying to think of something to do now that school is out.”

“Well, the Bob-Whites usually find something to keep them busy and stir up a lot of excitement, too,” her mother commented. She smiled warmly.

“I know we do. I guess it all started when Honey and I found Jim in the Mansion. A lot's happened since then,” said Trixie reminiscently.

“It certainly has,” agreed Mrs. Belden, “but get back to the invitation.”

“Well, Moms, we couldn't seem to think of any new project, and we were all getting kind of frustâfrustedâ”

“You mean âfrustrated,' don't you, dear? You're beginning to sound just like Mart with those big words.” Mrs. Belden smiled proudly at her daughter.

“As a matter of fact, it
was
Mart who said we were all getting kind of frustra-ted, and that we'd all better go up to Honey's house and have something to eat so we could think better. You know how food is usually Mart's solution to a problem.” She giggled.

Mart, Trixie's brother, was fifteen, eleven months older than Trixie, and looked so much like her that he was sometimes taken for her twin. In the last year, he had begun to grow so fast his wrists always seemed to be hanging out of his sleeves, but he still had the same sturdy build as his sister, the same sandy hair and blue eyes. Mrs. Belden smiled, for well she knew how all the Bob-Whites loved to eat, not just Mart, although he was probably the most ravenous of the group. Only yesterday her cooky crock had been emptied when all seven members of the B.W.G.'s, as they called themselves, had stopped at Crabapple Farm on their way home from their last day at school.

Besides Mart, Trixie, and her oldest brother, Brian,
the members of the secret club consisted of Honey Wheeler and her adopted brother, Jim Frayne, Diana Lynch, and Dan Mangan. All lived near each other a few miles outside the small Westchester County town of Sleepyside-on-Hudson, and all attended the same junior-senior high school.

“Well, just as we were eating those yummy brownies,” continued Trixie, “Mrs. Wheeler came in and said she had some news for us. Honey, who seemed just as mystified as the rest of us, asked her mother what it was all about, and then she told us! Can you imagine?”

“I think that's wonderful,” said Mrs. Belden, “and I can see no reason why you and your brothers can't go, ifâ”

The “if” was smothered by Trixie grabbing her mother and giving her a bear hug.

“Oh, Brian's out in the barn working on an old rattletrap car that he towed home yesterday. All we need is another jalopy around here! And Mart is still up at the Wheelers' talking about the trip. We knew we could count on
you
letting us go, but do you think Daddy will agree?”

“That was the âif' I was about to mention,” said her
mother, “but I'm sure if this expedition doesn't cost too much he will let you go.”

“Oh, it won't cost much,” Trixie quickly assured her mother. “Cobbett's Island isn't more than three or four hours' drive from here. You have to take a ferry from the mainland, and there's fishing, and sailing, and a deserted lighthouse, andÂ â¦” Trixie was off again. “And I won't need anything but my old blue jeans, and those shirts we used for gym last year, and maybe a new bathing suit?”

The last item mentioned was more of a question than a statement of fact, and Mrs. Belden, obviously surprised, said, “Why, Trixie, don't tell me you're interested in getting something new for a change. Is my girl growing up?”

“Could be,” answered Trixie thoughtfully. “Of course, I don't know what I'd use for money. The yearbook and my class ring took all my extra cash,” she added, her face clouding. “What
could
I do?”

Her question was left unanswered as she and her mother heard the familiar sound of the Belden Buggy as it turned into the driveway. The family station wagon had been christened the Buggy three years ago when a queen bee had chosen its interior as a perfect place to swarm. It had taken Mr. Lawlor, the local bee authority,
all day to capture her and put her in a new hive where she was soon joined by her faithful followers.

Bobby, Trixie's little brother, who had been playing with his electric train in his room, came running downstairs, out the door, and up the drive to meet his father. He was followed closely by Reddy, the friendly but undisciplined Irish setter, who was never far away from the little boy. Trixie brought up the rear.

Mr. Belden had scarcely stepped out of the car before his children had thrown their arms around him and Reddy began barking a joyful welcome. “Now what have my pets been doing on their first vacation day? I wish banks closed for the summer, just like schools,” he said, “but when a bank closes it's a disaster, not a holiday.”

“Gosh, Daddy, do they ever have to close?” asked Trixie.

Mr. Belden walked toward the house with an arm around each one. He explained that in the old days, before banks were insured by the Federal Government, they sometimes failed, and the people who had money in them lost all their savings. But now such a thing was almost impossible.

Trixie thought of her college fund of fifty-nine dollars and seventy-two cents lying safe and sound in the bank, then she sighed contentedly. Smiling up at her father, she said, “Do you know what?”

Hunter by Diana Palmer
The Next Species: The Future of Evolution in the Aftermath of Man by Michael Tennesen
Her Tattooed Fighter by Jenika Snow
Firemask: Book Two of the Last Legion Series by Chris Bunch
Prayers for the Stolen by Clement, Jennifer
Carnival Nights: Carnival #2 by Nelson, K.B.
Mind Over Mind by Karina L. Fabian
The Sword Of Erren-dar (Book 2) by R.J. Grieve
CRASH & BURN (Rule Breaker) by Arden, Susan
And One Rode West by Graham, Heather
Our partner