The New Biographical Dictionary of Film: Completely Updated and Expanded 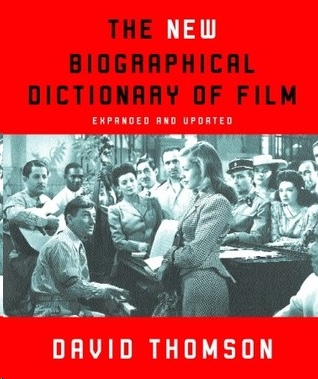 The Moment of Psycho:
How Alfred Hitchcock Taught America to Love Murder

Try to Tell the Story: A Memoir

The Whole Equation:
A History of Hollywood

In Nevada:
The Land, the People, God, and Chance

Beneath Mulholland:
Thoughts on Hollywood and Its Ghosts

Rosebud: The Story of Orson Welles

America in the Dark

Wild Excursions:
The Life and Fiction of Laurence Sterne

A Bowl of Eggs

All rights reserved. Published in the United States by Alfred A. Knopf, a division of Random House, Inc., New York, and in Canada by Random House of Canada Limited, Toronto.

For Kate and Kieran

The year before, I had been to the cinema for the first time and seen a film about a horse. I think it was called
Black Beauty
and was based on a famous book. The film was on at the Sture cinema and we sat in the front row of the circle. To me, it was the beginning. I was overcome with a fever that has never left me. The silent shadows turned their pale faces towards me and spoke in inaudible voices to my most secret feelings. Sixty years have gone by and nothing has changed; the fever is the same.

The great trouble is people trying to be funny. If they don’t try to be funny, then they are funny.

—Howard Hawks, talking about Katharine Hepburn and
Bringing Up Baby
, in
Hawks on Hawks

You are holding in your hands the fifth edition of a book that was first published in 1975. The book is now about one and a half times the size of the original, but still the form and nature of the book are as they were thirty-five years ago. But in 1975, the thing I called moviegoing was primitive: it was me, theatrical screens I could get to, and the television screen. Today, that cozy triangulation has been shattered first by the thing called video (which allows one to see nearly everything ever made and saved) and then, more comprehensively, by various reaches of the Web which support an infinite openness called access, or blurred seeing. Yet somehow, with so much more to see, I wonder if people are watching as closely as once they did.

Let me put it this way: the five films nominated for Best Picture for 1975 were
One Flew Over the Cuckoo’s Nest, Barry Lyndon, Dog Day Afternoon, Jaws
, and
Nashville
. Well, not the greatest ever made, and I think
Barry Lyndon
was lucky to be there, but as its replacement you could have had
Amarcord, Shampoo, Night Moves, The Man Who Would Be King, The Passenger
, or
Picnic at Hanging Rock
. It was a pretty good year. I won’t take the space to list the ten films the Academy scrounged together for Best Picture this last year, because so few of them stand comparison with what 1975 had to offer.

Meanwhile, only the other day, in
The New York Times
, Tony Scott raised the question of whether film criticism (along with the critics) might be dying or disappearing. As often, he and the
Times
tried to have it both ways: yes, criticism is fading away, but, don’t you worry, it’s still capable of being terrific.

Critics guard their jobs and so they assume that there is a flag still flying and a city there to be defended. Those of us old enough know how much the general level of film knowledge is in decline—and sooner or later criticism becomes a part of history.

Whereas I think it’s more than obvious that mainstream filmmaking (or being in Oscar contention) is ebbing away. So films are for smaller, smarter audiences? Yes, and usefully so. But there are those of us who feel that film will never be the same if it comes to be a “worthy” rival to the novel, the art gallery, or the concert hall. Why? Because what those places have to offer usually beats intelligent, artistic, independent movies to hell. But those places once went in awe of some movies made at the height of the medium’s confidence—a time for everyone. You see, the everyone-ness of it all is vital. If the story is for you alone, or for me, then Faulkner, Joyce, Proust, and on and on, have done better than the best movies.

So welcome to the fifth edition of a book that is pledged to believing in what was once a mass medium, as well as in the archaic marvel of books, where one entry will lead you to another—as in a story. But do not be too surprised if this is the last edition.

This edition is updated. There are over a hundred new entries, but still there are careers omitted that deserve to be mentioned—in part that is because “film,” in one form or another, is spreading so swiftly, while memory fails us. In the next ten years, more than ever, we may need to change our definition of what a film or a movie is more than we have ever done before.

Keeping up with that international scene and the frenzy of what is “new,” and with the fragmentary wonders on the net, will become increasingly experimental. Still, some filmgoers and filmmakers want to know the outline of our great history, and I hope that this book is a step towards that. The picture on this edition’s jacket (chosen by the very talented Carol Devine Carson) is from a recent film, and one I love. But it serves as the illustration for this book because, inasmuch as it addresses the idea of education, it hints at the possibility that the teacher is a perilous person to sit down with—while the kid should stay wide awake.

Writing the introductions to the several editions of this book can be a dispiriting affair. The author gets into a gloomy mood that fears times have changed (not necessarily for the better), and he is left alone, trying to make some sense of it all. No wonder the poor idiot is tempted to think enough is enough. But then, he comes to give thanks—to all the people who, one way or another, have shared in the ongoing “conversation” about movies. All at once, he realizes that he has such lively company, such friends and arguers. Moreover, the thanking has become the more enjoyable since I stumbled into the game of asking people for their three favorite films. The informal poll that emerges suggests how far movie buffs now live (or would prefer to live) in the past.

Anyway, I am grateful to all the people listed. I start with the publishing houses involved: long ago, at Secker & Warburg, where Tom Rosenthal (
For a Few Dollars More, The Searchers, The Third Man
) was decisive. At Knopf, I want to thank Bob Gottlieb for his unfailing editorial acumen and adventure (
Tokyo Story, The Wind, The Lady Eve
), Kathy Hourigan, maybe the book’s best friend (
On the Waterfront, The Godfather, The Lady Eve
), Jessica Freeman-Slade, sufficiently trained in the Knopf operation to help everyone and need three comedies (The
Philadelphia Story, When Harry Met Sally, A Serious Man
), Jonathan Segal (
Les Enfants du Paradis, Casablanca, The Grand Illusion
), Kathy Zuckerman, an inspired publicist (
Breakfast at Tiffany’s, The Great Escape, Bright Star
), Kevin Bourke whose copyediting and movie knowledge saved me from so many errors (
Conte d’Automne, La Dolce Vita, North by Northwest
), Carol Carson, who designed the jacket (
Suspicion, Cría, I Know Where I’m Going
), Virginia Tan, who designed the book (
The African Queen, The Wizard of Oz, Midway
), Roméo Enriquez, the production manager (
Diva, The Umbrellas of Cherbourg, Field of Dreams
), and Charles Spaulding, one of those who actually sell books across the country (
Chinatown, Vertigo, Dr. Strangelove
). Above all, my lasting thanks to Sonny Mehta. And in England, the same thing goes for Richard Beswick at Little, Brown (
Some Like It Hot, Les Enfants du Paradis, The Life and Death of Colonel Blimp
).