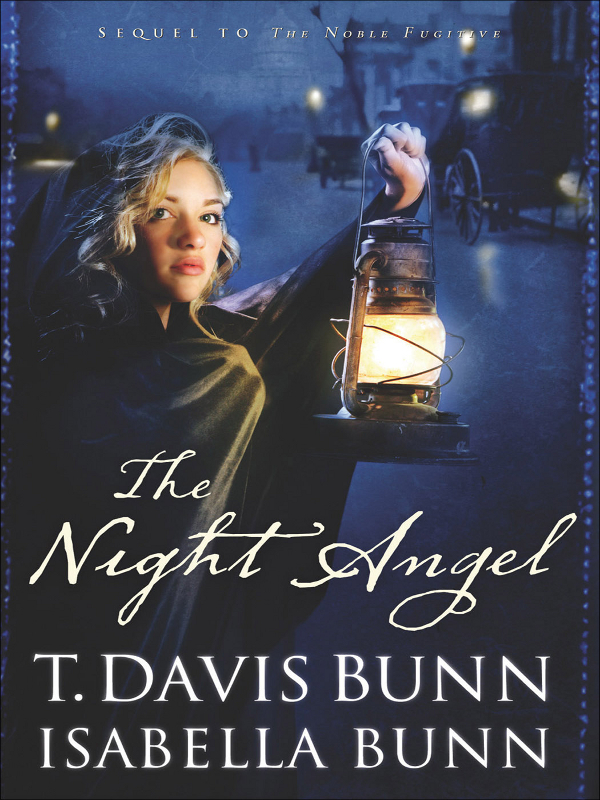 For my sister,
Bunny Matthews,
who has helped me appreciate
the artist’s technique
and spirit

T. DAVIS BUNN is an award-winning author whose growing list of novels demonstrates the scope and diversity of his writing talent.

ISABELLA BUNN has been a vital part of his writing success; her research and attention to detail have left their imprint on nearly every story. Their life abroad has provided much inspiration and information for plots and settings. They live near Oxford, England.

The Book of Hours

Drummer in the Dark

Riders of the Pale Horse

To the Ends of the Earth

The Meeting Place     The Birthright

The Sacred Shore      The Distant Beacon

John Falconer watched the line of people on the ridge, silhouetted against a leaden sky. When he heard the clank of chains, he knew. He made out a dozen figures locked together. A horseman ambled behind them, reins held loosely in one hand. A leather quirt was tied to the rider’s other wrist and rested upon the saddle. The rider wore a low-brim hat that masked his eyes. But Falconer knew the rider watched the chained group with a predator’s gaze.

The sun finally managed to pierce the clouds. A golden lance fell upon one of the chained men. His face became illuminated, as though touched by the finger of God.

The chained man turned then. He looked straight at Falconer.

And spoke his name aloud.

Falconer rose from his bed and slipped into his clothes. The actions gave his hands something to do while his heart resumed a normal pace. Moonlight fell through his window, illuminating a room far too cramped for his massive frame. He lit a candle and watched the sputtering flame for a time, sorting through the dream’s images.

For years after coming to faith, Falconer had awoken to dread images and drenching sweats. But this dream had been no nightmare. In fact, as he listened to his breathing steady, he felt something else entirely. Despite how the image linked Falconer to his own tragic past, he felt neither sorrow nor dismay. Instead, he felt exhilarated. What was more, he found himself wondering if perhaps the dream had carried some form of divine message.

Falconer seated himself at the narrow table and read his Bible by candlelight. He had no idea of the hour, though he knew it was very late. The church towers stopped counting the hours at eleven. His eye caught sight of his reflection in the window opposite his little table. The window was filled with his bulk, like a dark-haired beast caught in a narrow cage door. The candlelight flickered, making the scar that ran up the left side of his face writhe like a serpent. He traced the scar with one finger and wished his outsize frame was merely due to the window’s uneven glass. In truth, he carried a fighter’s look about him. No wonder Alessandro and Bettina Gavi were so alarmed about his affection for their daughter, Serafina.

Falconer folded his hands over the open Book and lowered his head. He presented his midnight prayer, faltering and terse. But Falconer had come to believe firmly in God’s ability to look beyond his awkward words and see the heart’s message. And his heart was sore indeed.

His first few words were a request for clarity over the dream’s image. From there he wandered far. It was difficult for a strong man to face the helpless moment. And Falconer was trapped by his love for Serafina.

When he lifted his head, the candle’s glow drew Serafina’s image in the window beside Falconer’s reflection. Hair the color of winter wheat framed a perfect face, palest lips, and eyes of captured sky. Her father was a Venetian merchant prince, her mother from the Italian Alps. She was rich, she was lovely, and she trusted him so fully he felt crippled by wants and needs he feared she would never share.

He shut his eyes again and rested his forehead upon his hands. Hands made for sword and pike and pistol. Fists so powerful they could punch through a solid oak door, and had done so more than once. Folded now in prayer, turned from violence and wrath by the miracle of salvation.
Father, I am the
worst of sinners and the least of all. I have no right to ask you for
anything more. Not after you have given me the greatest gift of eternity.
Yet ask I must. For I am as powerless as ever I have been. Is there
any hope that my love for Serafina might be returned? Flawed and
sinful as I am, might I ever know the gift of a wife and family? Give
me a sign, Lord. For the days lay empty before me and the nights rest
heavy on my heart. Give me a sign
.

Then the knock came upon his door.

Falconer rose slowly. “Who goes there?”

“It is I” came the urgent whisper.

His heart surged. Was this his sign? “One moment.” Falconer lifted his eyes to the ceiling close overhead and let his exultation surge in one silent shout. Then he stepped into his boots and opened the door.

Serafina stood before him. Beside her was Mary, the traveling companion from England who had remained as Serafina’s maid. Both were dressed in the hurried fashion of having reached for clothes in the dark. Mary appeared terrified, continually throwing glances back down the servants’ hallway.

Serafina, however, showed Falconer only steadfast trust. “I saw men. Three of them. With guns.”

Falconer moved to his desk and swiftly blew out the candle. He drew the door shut behind them. “Tell me everything,” he said, keeping his voice low.

“Something woke me. A sound perhaps. I’m not sure,” Serafina began.

“I heard it too,” Mary whispered.

“You were fast asleep. I heard you breathing.”

“I heard it clear as the nose on my face, miss. I tell you—”

Falconer halted the disagreement with a touch to Mary’s arm. “You heard a sound. What then?”

“I moved to the window and saw three men.”

“No. I had crawled across the floor and came up slowly by the glass.”

He repressed his smile. “Good girl.”

Nonetheless Mary caught his amusement. “How you can find anything humorous in this affair, good sir, is beyond my understanding.”

“Tell me about the men.”

“Three, as I said. One very tall. The other two thicker and shorter. I saw something in the moonlight. The tall man moved, and I saw he carried a musket. We came to you because they stood between our cottage and my parents’ apartment.”

The previous summer, when Falconer had brought Serafina to Washington, they had found Alessandro and Bettina Gavi residing in an apartment at the rear of the Austrian legate’s manor. The building fronted Pennsylvania Avenue, with six large official chambers stretching along the street. But the apartment assigned to the Gavis contained only three rooms— kitchen, parlor, and cramped bedroom. Serafina and her maid had been assigned a chamber in the manor’s rear cottage. Falconer had been given a room in the servants’ wing, across the courtyard from the Gavis’ apartment. Which meant he was effectively isolated from both Serafina and her parents. This arrangement caused him no end of concern. Especially when the rumors began swirling.

Falconer was treated as just another guest’s hired man, only larger and potentially more lethal. Few of the legate’s entourage even bothered to learn his name. He slipped about, he scouted, and he listened. That week, Falconer began hearing below-stairs rumors that Alessandro Gavi was marked for destruction.

Falconer repeatedly warned Serafina’s father. But Alessandro Gavi was a diplomat by training and by nature, which meant he preferred to take a course of action only when everyone was in accord. Falconer wanted them moved to a private home, where they could be more protected. But when approached, the legate insisted that Alessandro and his family were his honored guests. Alessandro dithered, hoping to move only with his legate’s blessing.

Falconer pushed open the servants’ exit, motioning for the women to remain well back. The door was at the base of the rear stairs, connected to Serafina’s cottage by a narrow brick path. The moon was hidden behind scuttling clouds. The March night was cold and very quiet.

Falconer searched in every direction and saw nothing. But his well-honed senses felt danger lurking close by. He was at full alert as he drew Serafina forward. Quiet as a breeze he whispered, “Where did you spot them?”

She pointed at the likeliest spot for an attack. “There.”

Papelucho perdido by Marcela Paz
The Other Side of the Island by Allegra Goodman
Diana the Huntress by Beaton, M.C.
Echoes from the Lost Ones by Nicola McDonagh
The Denver Cereal by Claudia Hall Christian
Vow of Silence by Roxy Harte
Girlfriend Material by Melissa Kantor
All I've Ever Wanted by Adrianne Byrd
The Preacher's Son #2: Unleashed by Jasinda Wilder
If It Flies by LA Witt Aleksandr Voinov
Our partner