Read The Oath of The Vayuputras Online

The Oath of The Vayuputras 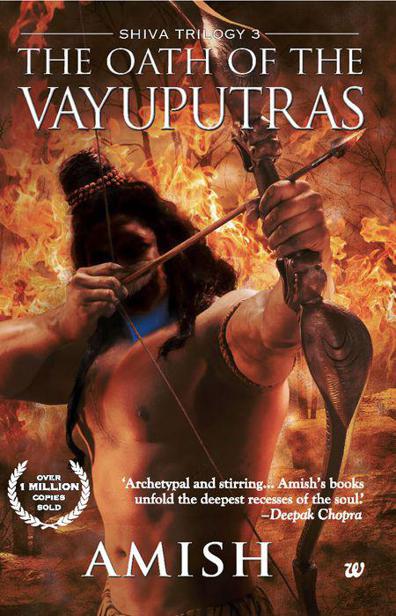 Praise for the Shiva Trilogy

‘Amish’s mythical imagination mines the past and taps into the possibilities of the future. His book series, archetypal and stirring, unfolds the deepest recesses of the soul as well as our collective consciousness.’

‘Amish is a fresh new voice in Indian writing – steeped in myth and history, with a fine eye for detail and a compelling narrative style.’

– Shashi Tharoor, Minister of State in the Indian government
and celebrated author

‘Furious action jumps off every page.’

‘Tripathi’s Shiva Trilogy is already being touted as India’s
Lord of the Rings.
’

‘…Amish has mastered the art of gathering, interpreting and presenting India’s many myths, folklores and legends, and blending all of that into fast-paced thrillers that change your views about gods, cultures, histories, demons and heroes, forever.’

‘Amish’s Shiva Trilogy has a refreshing storyline… The narration forces you to impatiently turn the page to know what secret is going to be revealed about the “Neelkanth” next.’

‘It’s a labour of love... Amish also humanizes his characters, something which most popular Indian writers fail miserably at.’

‘Amish’s philosophy of tolerance, his understanding of mythology and his avowed admiration for Shiva are evident in his best-selling works.’

‘Tripathi is part of an emerging band of authors who have taken up mythology and history in a big way, translating bare facts into delicious stories.’

‘[Amish] has combined his love for history, philosophy and mythology into a racy fictional narrative which depicts Lord Shiva as a Tibetan tribal leader.’

‘Tripathi’s approach to storytelling is contemporary and urban which is one of the main draws of the books. Though the story is fictional, its characters and historical depictions are factual […].’

‘[Amish] does a matchless job of bringing Shiva’s legacy into a character who inhabited the earth.’

‘The Shiva Trilogy is a racy mytho-thriller with a masala twist, like
Amar Chitra Katha
on steroids.’

Praise for
The Immortals of Meluha

‘I was blown away with the world of Meluha and riveted by Amish’s creation of it.’

‘Shiva rocks. Just how much Shiva rocks the imagination is made grandiosely obvious in
The Immortals of Meluha
. […] Shiva’s journey from cool dude […] to Mahadev […] is a reader’s delight. […] What really engages is the author’s crafting of Shiva, with almost boy-worship joy.’

– The Times of India

‘
The Immortals of Meluha
[…] sees Lord Shiva and his intriguing life with a refreshing perspective. […] Beautifully written creation. […] Simply unputdownable for any lover of Indian history and mythology.’

‘The story [in
The Immortals of Meluha
] is gripping and well-paced. An essentially mythological story written in a modern style, the novel creates anticipation in the reader’s mind and compels one to read with great curiosity till the end.’

‘[
The Immortals of Meluha
is] amongst the top 5 books recommended by Brunch... the story is fascinating.’

‘[
The Immortals of Meluha
] has philosophy as its underlying theme but is racy enough to give its readers the adventure of a lifetime.’

‘[
The Immortals of Meluha
is a] wonderful book, replete with action, love and adventure, and extolling virtues and principles... The author has succeeded in making many mythological characters into simple flesh and blood human beings, and therein lie(s) the beauty and the acceptability of this book.’

‘The author takes myth and contemporises it, raising questions about all that we hold true and familiar. The book is a marvellous attempt to create fiction from folklore, religion and archaeological facts.’

‘…
The Immortals of Meluha
is a political commentary with messages for our world and a hope that since they flow from the Mahadev himself, they will find greater acceptance. Be it the interpretation of Shiva’s battle cry – Har Har Mahadev as Every man a Mahadev or the valour of Sati who fights her own battles – every passage is rich in meaning, and yet, open to interpretation. Therein lies the strength of this book.’

‘Following the amazing success of the first book, one has to admit that Amish has managed to touch a very popular nerve […].’

Praise for
The Secret of the Nagas

‘With his book, the second part of the Shiva trilogy [
The Secret of the Nagas
], [Amish] seems to be taking a walk in [Dan] Brown’s shoes.’

‘In
The Secret of the Nagas
, the author tells the story well, tying up seemingly loose ends and tangents into a tight plot.’

‘[…] a gripping tale that combines lots of action with deep yet accessible philosophy. Amish does not disappoint. […]
The Secret of the Nagas
is furiously packed with action and intrigue and leaves the reader guessing.’

‘…the book has it all – philosophies, spiritual messages, secrets, battles and mysteries.’

‘It’s clear that [
The Secret of the Nagas
] has struck a chord with Indian readers.’

‘Amish Tripathi retained his Midas touch with
The Secret of the Nagas.
’

‘
The Secret of the Nagas
is impressive in its conception... Tripathi is an excellent storyteller.’

‘The moment you start reading [
The Secret of the Nagas
], you are sucked into the adrenaline-pumping ride through the enigmatic landscape populated by a host of [characters].’

‘Few books on history and mythology have an element that makes you think beyond the printed word.
The Secret of the Nagas
, Amish Tripathi’s second book of the Shiva Trilogy, does that.’

The Oath of the
Vayuputras

Book 3
of the
Shiva Trilogy

Amish Tripathi asserts the moral right to be identified as the author of this work.

This is a work of fiction. Names, characters, places and incidents are either the product of the author’s imagination or are used fictitiously and any resemblance to any actual person living or dead, events and locales is entirely coincidental.

Inside book formatting and typesetting by Ram Das Lal

This book is sold subject to the condition that it shall not, by any way of trade or otherwise, be lent, resold, hired out, or otherwise circulated without the author’s prior written consent, in any form of binding or cover other than that in which it is published and without a similar condition including this condition being imposed on the subsequent purchaser and without limiting the rights under copyright reserved above, no part of this publication may be reproduced, stored in or introduced into a retrieval system, or transmitted in any form or by any means (electronic, mechanical, photocopying, recording or otherwise), without the prior written permission of the copyright owner, except in the case of brief quotations embodied in critical articles or reviews with appropriate citations.

To the late Dr Manoj Vyas, my father-in-law
Great men never die
They live on in the hearts of their followers

Har Har Mahadev
All of us are Mahadevs, All of us are Gods
For His most magnificent temple, finest mosque and
greatest church exist within our souls

Shades of Shame (Semper Fi) by Cooper, Laura, Cooper, Christopher
The Rise and Fall of Alexandria by Justin Pollard
The Problem at Two Tithes (An Angela Marchmont Mystery Book 7) by Clara Benson
The Bravest of the Brave by Shutta Crum
Diane R. Jewkes by The Heart You Own
The Plato Papers by Peter Ackroyd
Burial by Neil Cross
Midnight Louie 14 - Cat in a Midnight Choir by Carole Nelson Douglas
Escorting the Billionaire #3 (The Escort Collection) by Leigh James
New Balls Please (Ball Games #3) by Andie M. Long
Our partner