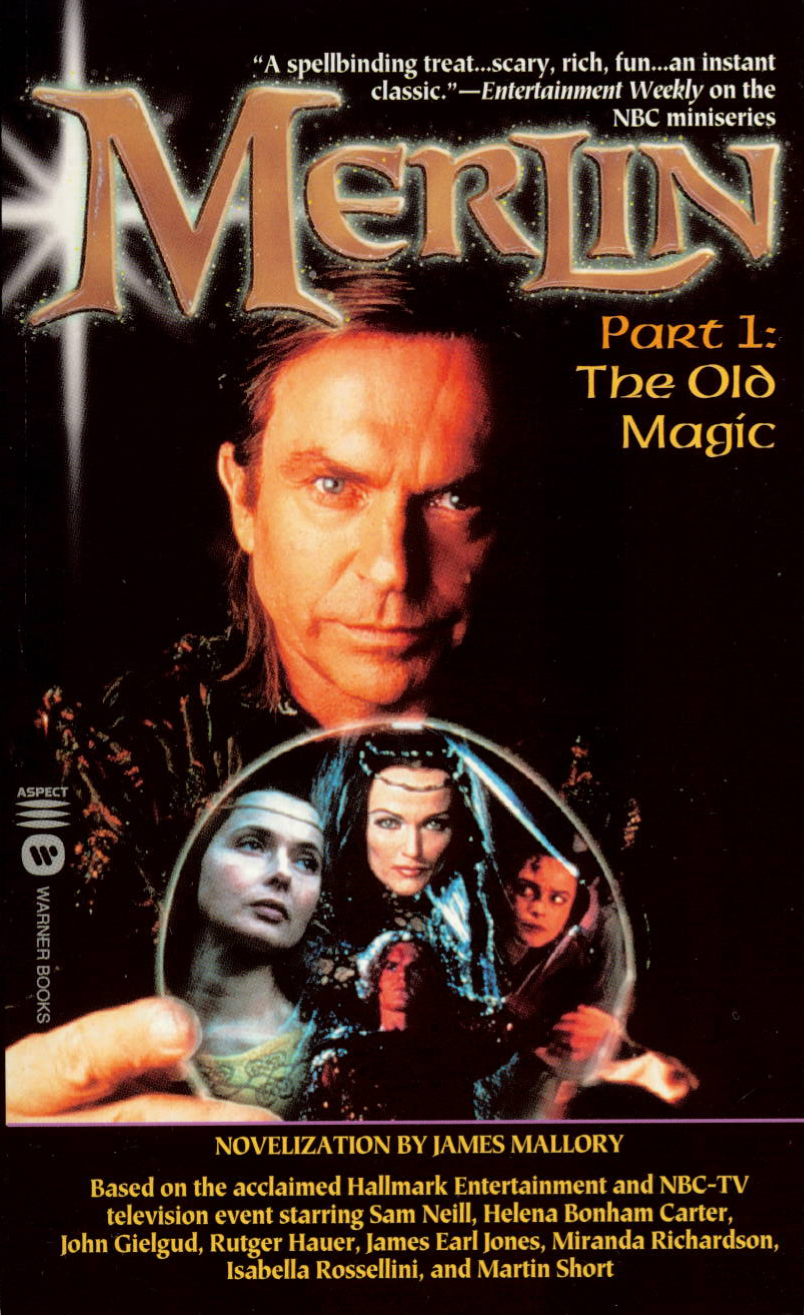 “Use your magic!” Frik shouted from the far shore.

“I can’t remember any of it!” Merlin shouted back. None of the spells Frik had taught him seemed suitable for saving him from
falling into a river that would grind his bones like corn between millstones.
I need to get out of here!
his mind shrieked.

“Fly!” Merlin shouted, without quite realizing what he was saying. Suddenly he felt the shimmering transformation of magic
course down his body, but this time it did not end with the lighting of a candle or the elongating of a branch. This time
the magic turned inward, transforming his very self …

Aspect® is a registered trademark of Warner Books, Inc.

For Betsy, Jane, Fiona, and Russ,
for all their help and support,
and for MJ, for the usual.

Prologue: The Courts of Shadows

Chapter One: The Courts of Winter

Chapter Two: The Courts of the Greenwood

Chapter Three: The Courts of Mirrors

Chapter Four: The Courts of Love

Chapter Five: The Courts of Fairy

Chapter Six: The Courts of Deception

Chapter Seven: The Courts of Magic

Chapter Eight: The Courts of Honor

Chapter Nine: The Courts of Cruelty

Epilogue: The Courts of the Moon

A Preview of Part 2: The King’s Wizard

S
he rode the winds of the upper air in search of a very special man. She did not remember how long it was since she had traveled
this way, for her kind did not reckon the passing of Time in the way that mortal men did. Seasons spun over the face of the
earth like shooting stars, but she paid little attention to their passing. She was the stuff of stars, not seasons, and the
Old Magic ran in her veins, hot and pure and old. She was Mab, Queen of the Old Ways.

But the Old Ways were dying.

It had started so insignificantly that even she could not put her finger on exactly when the first challenge to her power
had come. Perhaps when the first Christian had come from Rome to preach his pernicious doctrine to the people of her land.
She had been strong then, and arrogant in her power, and what could the insignificant doings of Men matter to her as she listened
to the crystal music of the stars in their courses? The land would take them in and its magic would change them as it had
so many others.

But the land had not changed the Christians. They had changed the land. When they began to lay waste to her people, cutting
down the sacred groves and toppling the standing stones that marked her temples and sacred places of power, she had lashed
out at them in a hundred furious battles, but it was already too late to win the battle. These Christians were not content
for their strange god to live in harmony with the other Powers of Britain. They demanded that those Powers be cast down and
banished forever—and Mab’s kind could not live without human belief.

War came to a land that had never known it. As the gentle spirits of field and wood were destroyed by cold iron and holy water,
the people no longer lived in harmony with the land. Weeds grew among the scanty crops that had once grown lushly at the behest
of a Priestesses of the Old Ways. Trees that had once borne abundant fruit withered. Famine spread throughout the land, for
man and beast alike, and now humankind labored with incessant toil to bring crops from the soil, and turned in even greater
numbers to the priests of the New Religion for the certainty and security they could offer.

And as they did, Mab’s people—the folk of Fairy—died. When human folk forgot them, they dwindled away into nothingness. She
must save them, somehow. She must destroy the Christians and the Christian king who persecuted her people.

The mead-hall was lit by flickering torches whose smoke spiralled up to the age-darkened rafters of the Great Hall and the
carven dragon-heads there. The sightless wooden eyes gazed down on the feasting Saxons below as if hungry to join in their
merriment.

The walls were hung with the painted round shields of the Saxon war-band, the bright designs and snarling faces looking down
on the tables full of feasting men. Their enemies called them pirates; they called themselves warriors—landless men and younger
sons who had no patrimony save a sword-blade and no skills save those of war. And so they sailed and raided all up and down
the Frisian coast, seeking the gold and glory that could take the place of a homeland.

The war-leader looked out over his followers and wondered why he could not share in their merry-making. He was a young man,
Saxon-fair and muscled like a young bull. He wore a great wolf-skin cloak, and gold glittered about his brow and upon his
brawny arms, a mark of success in countless previous attacks. The raid they celebrated here tonight had gone well; they’d
sacked a village a few days’ sail down the coast and came away well-laden with gold and glory and few men lost. Now their
leader hosted a great feast for them, with bards to make a song of his prowess and valor in the battle. And by so much his
glory increased.

But it wasn’t enough. Gold was spent and glory faded. His eyes were the pale wintry blue of northern ice, and he looked out
over the merriment of his companions with increasing restlessness. Only land was eternal, and you could not load land aboard
a ship and sail away with it …

“But you could still take it,” a voice whispered in his ear.

The young warlord straightened in his chair and turned sharply toward the sound of the voice. What he saw made his eyes widen.

A woman stood beside his chair, but a woman like no other woman he had ever seen. Her skin was white as moonmilk, and her
long black hair was as dark as raven’s wings. It was twisted and braided and studded with jewels, but enough of it fell free
to coil about her shoulders like glittering black snakes. Her face was painted into a harsh mask, her eyes rimmed with black
that made their translucent fire glitter like moonlight on the ice. She wore a trailing black gown that made the young warlord
think of smoke and shadows and the dark and powerful undertow that could claim men and ships and drag them to the bottom of
the sea in an instant.

“Who are you?” he asked, but in his heart he already knew. His people called her kind
svartaelfin
—the dark folk of Fairy. This one must be their Queen, so rich and powerful did she look.

“One who can give you what you desire,” she answered. She put a hand on his arm, and at her touch he felt a mingling of alarm
and desire that excited him. He had never felt such an emotion before, save in the heat of battle.

“And what do I desire?” he asked, turning toward her and looking over his shoulder to see who noticed. All were occupied at
their drinking. No one saw her but him, he was sure of it now.

“Land. Power. A Kingdom. A name that will live forever.” Her voice was like the surf hissing over the rocks.

“All men desire that,” the warlord said. He was beginning to be irritated as well as wary, and his temper was not good at
the best of times. “Where are these lands?”

“West of here,” the woman said. She pointed in the direction of the sea. “The are undefended and ripe for the taking, groaning
beneath the tyranny of a Christian king.”

“Britain?”
The young warlord was astonished. “Britain is a Roman province; Constant rules there as their puppet, and if he should cry
for help, the Legions will come to his aid. They’ll slaughter my men by sheer force of numbers.”

“Rome will send no more Legions to Britain,” the woman answered. Her eyes glittered like those of a hunting cat. “The Empire
is fallen—now is the time for new men to carve out new empires. And I will help you.”

Rome fallen? But the Roman Peace had lasted for as long as the Saxons could remember, the Roman Legions keeping them from
raiding the soft fat villages of Brittany, Armorica, and Gaul—all Roman provinces—but protecting Britain most of all, for
the Romans valued the tin trade that flourished there.

His eyes narrowed as he studied his eldritch companion. Most men would fear her, but he was not most men. He had known from
the cradle that he was different, that he was born to rule.

“And your price for this aid, Lady?” he asked levelly.

Her face twisted into a mask of hate. “Kill the King! Kill Constant and every Christian in the land and I will help you rule
in his place,” Mab hissed. “You will have power and rich lands beyond imagining. You are Pagan, and I do not care who rules
there so long as the people return to the Old Ways.”

“Killing Christians. I can do that. I’m pretty good at it, actually,” he said with satisfaction.

Let her think he served her, until he had his kingdom. He bowed down to no power on earth or beneath it—he cared not what
gods or spirits existed or didn’t so long as he ruled.

CHAPTER ONE
T
HE
C
OURTS OF
W
INTER

T
he road to Anoeth was long and twisted. Only the dead travelled it easily. It was a land of grey mist and the blackened stumps
of stark, twisted trees that reached out of the mist like hands from the grave. Even Mab felt its chill, and she shivered
as she groped her way among the standing stones that marked the path. This was not her own kingdom—this was the land of Death
and Winter, ruled over by its own dark king, Idath.

Once they had been lovers, for Idath, grim and terrifying as he seemed to the souls he harvested, was as necessary to the
Old Ways as Mab herself. When the Wheel of the Year turned, spinning the seasons from summer to winter, Idath was there to
take up the weak who fell to Winter’s cruel sharpness. Without death and change, there could be no light and life.

But death must balance life, not overwhelm it. The war that had raged over Britain since Vortigern landed had sown death in
its wake as a farmer sowed seed, until the land was awash in blood. King Constant was old and crafty, and his priests filled
his armies with the terror of Hell and the death which has no rebirth. They fought like maddened wolves for their King, but
Vortigern had allies in the Danelaw, and with their help he had slowly pushed the royal armies back across the face of Britain,
but at a terrible cost to both sides in lives.

Now it ends,
Mab told herself. Vortigern was camped outside the walls of London, and her allies would open the gates to him. Before another
dawn, the Christian rule in England would be over, washed away in blood.