Read The One I Was Online

The One I Was 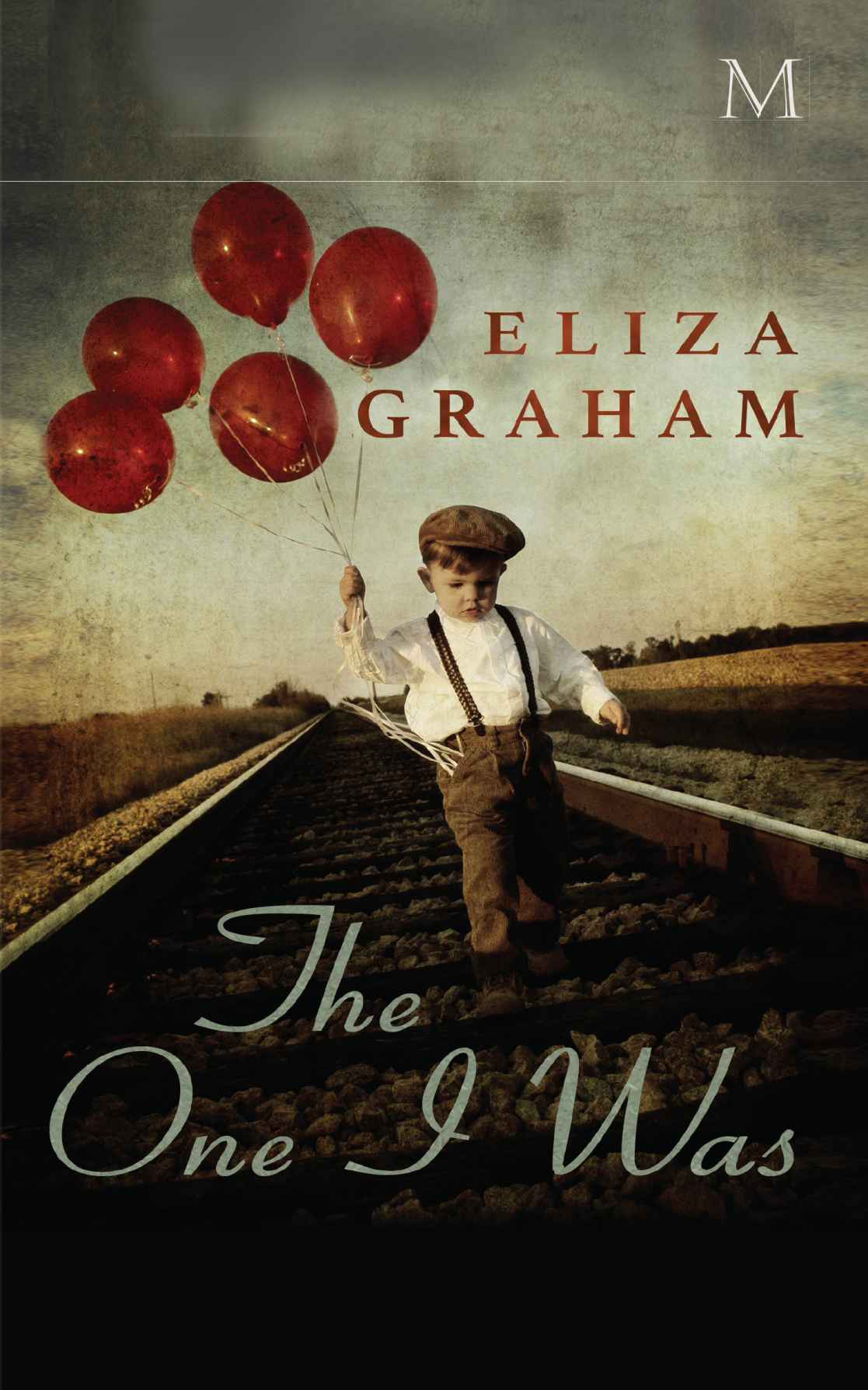 The One I Was

Eliza Graham has asserted her right under the Copyright, Designs and Patents Act, 1988, to be identified as the author of this work.

This book is a work of fiction. Names and characters are the product of the author's imaginations and any resemblance to actual persons, living or dead, is entirely coincidental.

This book is sold subject to the condition that it shall not, by way of trade or otherwise, be lent, resold, hired out, or otherwise circulated without the author's prior consent in any form of binding or cover other than that in which it is published and without a similar condition including this condition being imposed on the subsequent purchaser.

Every atom of my body screamed at me to run away from the elegant and classical white house at whose door I stood.

I was a forty-something woman, a professional, a nurse, but I felt like a twelve-year-old again. I forced myself to push the doorbell. Sarah, the housekeeper, opened the front door and let me in. I heard myself exchanging pleasantries with her while my heart beat out a tattoo. I took stock of my surroundings. Duck-egg walls. A chandelier of twisted metal and crystal, hanging from the ceiling like an icicle. I looked up the staircase, trying to accustom myself to being back at Fairfleet again. My fingers clenched the handles of my suitcase as I drew in a long breath. The house smelled of new paint and the large white lilies on the console table. An older, deeper smell undercut the scent: polished wood and old stone, but it should have been bitter like burning almonds, to remind me of my guilt.

The telephone rang. Sarah frowned. ‘That’ll be the district nurse. Excuse me one moment, Rosamond.’

Some of the balustrading on the staircase had been replaced, but the work had been done with sensitivity; only someone who knew where to look would have spotted the new spindles. The flagstones replacing the old parquet floor might have been there for centuries. What had I expected: that the house would somehow remember what had happened on a clear, frosty morning just like this, thirty years ago?

I tried to clear my mind, to remember why I was here. I thought about my patient, Benny Gault, and his arrival at this house. Just before the war Fairfleet had taken in a group
of Jewish refugee boys from Germany, made them a home while they grew up, and sent them back out into the world to make good lives for themselves. And then the adult Benny Gault had returned years later to buy Fairfleet and make it his own. Now he lay dying upstairs.

Sarah came back in. ‘Sorry about that: come through to the kitchen, Rosamond.’

I moved onwards into the house. I felt more relaxed now I wasn’t dwelling on myself and my past. I was thinking about how Benny must have felt when he’d first arrived in England. Homesick? Relieved? Excited? Possibly all of these.

The boy clutched his football. The label round his neck flapped in the breeze, cutting into his skin. Now they’d docked at Harwich, his stomach had stopped heaving. He stood at the top of the gangplank, took in deep breaths of the salt-and-oil air that rasped his throat. Where were the little kids he’d looked after on the voyage? A woman in nurse’s uniform was already steering them away. Someone pushed him gently down the gangplank.

It looked different, England: the cars, dockers, buildings. People were smiling at them, even the policemen in their tall helmets and capes. One of them was holding a small girl’s hand, picking up her suitcase, snow falling on them.

All very foreign. All very safe. He had to get the hell out.

He turned around. He’d hide on the boat. But there was no fighting the tide of children streaming down the gangplank. Boys cursed him and girls tutted as he shoved into them. He gave up and let them push him down to dry land. Not that it was very dry. It had obviously rained here. And now it was snowing, white flakes dissolving into the black ground. Everything swayed as Benny walked along the quay. Perhaps it took a while to get used to being on land again. The English dockers were shouting in that up-and-down, up-and-down language he couldn’t understand.
HARWICH
, he read on a sign.

Then they were on a bus, the air thick with the reek of long journeys and farewells and not being sure where the toilets were and hoping the big boys wouldn’t give you trouble. Act your age, he told himself. You’re eleven, not six. A plump woman in a hat that
looked like a squashed cake wiped noses and handed round wrapped sweets. Someone was sick, very quietly, into a paper bag. A child of about four wept, face buried in his lap, tears running down his knees. The seven-year-old girl twins stared at their hands, their golden curls now less smoothly brushed, stains on the fronts of their coats.

Then the camp: a huge, metal-clad structure. Not like the camps he’d heard about at home. The woman in the squashed-cake hat ushered them inside to trestle tables, where they were served a hot stew he was too tired to identify. Young men and women led them to little houses like miniature Alpine chalets, where they were to sleep, even though it wasn’t yet night. Groups of three or four. The other boys in his hut complete strangers. Good. He laid his football at the end of the bunk. Certain he wouldn’t sleep. Closed his eyes to block out everything. Thought of his bedroom back at home. Quiet. Shuttered. Football posters on the wall. Boxes of construction kits. A bookcase of books.
Emil and the Detectives
was his favourite, be good to have it here now and flick through its pages. A dull ache of homesickness inside him now. Try to ignore it, feel the safe roundness of the football at your feet and . . .

When he woke it was morning. He was still wearing his outer clothes. If he’d been at home there’d have been trouble.

They spoke German here – he heard them calling out as they walked along outside the chalets, knocking on doors, encouraging kids to wash before breakfast was served.

He’d tell them he’d changed his mind and wanted to go home. But he’d seen them on the boat, hushing kids who cried for lost homes and families. Telling them how fortunate they were, how their families and friends were so relieved they were safe and would be sad if the children returned to the danger.

Well he was no little kid. He wasn’t going to blub. He’d force down the memories of the people at home so they wouldn’t trouble him any more.

Perhaps he’d only be in England for a few months anyway, if the war didn’t happen. They might be pleased to see him back in Germany after an absence.

A couple of days passed. They were kind enough here. He was even growing used to English cooking: strong-smelling kippers for breakfast with a thick oat soup called porridge, which coated your insides like a warm glue.

At home breakfast meant warm bread rolls from the baker’s. Eggs boiled so that their yellows were still soft. Slices of nutty cheese.

Thinking about these past meals sharpened the persistent ache inside him into a more painful stab of homesickness. He looked around for distraction. The children were wearing coats and scarves to breakfast in this huge glass-and-iron edifice where once, they’d been told, holidaymakers had enjoyed cabarets, and fish and fried potatoes the British called chips. Were all English homes cold like this? A vase of chrysanthemums sat on the table. At home these were flowers you took to the cemetery for your mother’s grave. The floor was wet from snowy footsteps.

‘Try smiling,’ he overheard a youth worker telling a boy of about his age. ‘It helps.’

Benny practised smiling. His facial muscles ached. He’d laughed since he’d been here at Dovercourt: at a clown performing in one of the evening shows. But you could laugh and not really be happy.

‘Why don’t you join in prayers?’ one of his room-mates in the wooden chalet had asked him this morning, frowning.

Benny tried to make a relaxed but dismissive gesture with his hand.

‘Weren’t you observant at home?’ The boy folded a towel into neat squares, while he addressed Benny, eyes narrowed.

Benny had thrown his football at the boy, hitting him in the midriff and preventing further questions.

Now the would-be buyers shuffled into the hall to examine the wares. The blond Berlin twins drew a flock of clucking matrons. Those girls would be sitting in front of the fire with doting foster-parents before supper time.

Benny arranged his face into what he hoped was a nonchalant confidence. Nobody came near him. He fiddled with the petals on the chrysanthemums.

Safe in his Arms by Melody Anne
Sahara by Clive Cussler
The Well of Shades by Juliet Marillier
Corambis by Sarah Monette
Montana Fire by Vella Day
Owned by the Yakuza: A Japanese Mafia Bad Boy Romance by London, Ariel
How to Propose to a Prince by Kathryn Caskie
Dear Old Dead by Jane Haddam
Intervention by Robin Cook
Shadow Man by Grant, Cynthia D.
Our partner