The Other Side of Truth (The Marked Ones Trilogy Book 3) 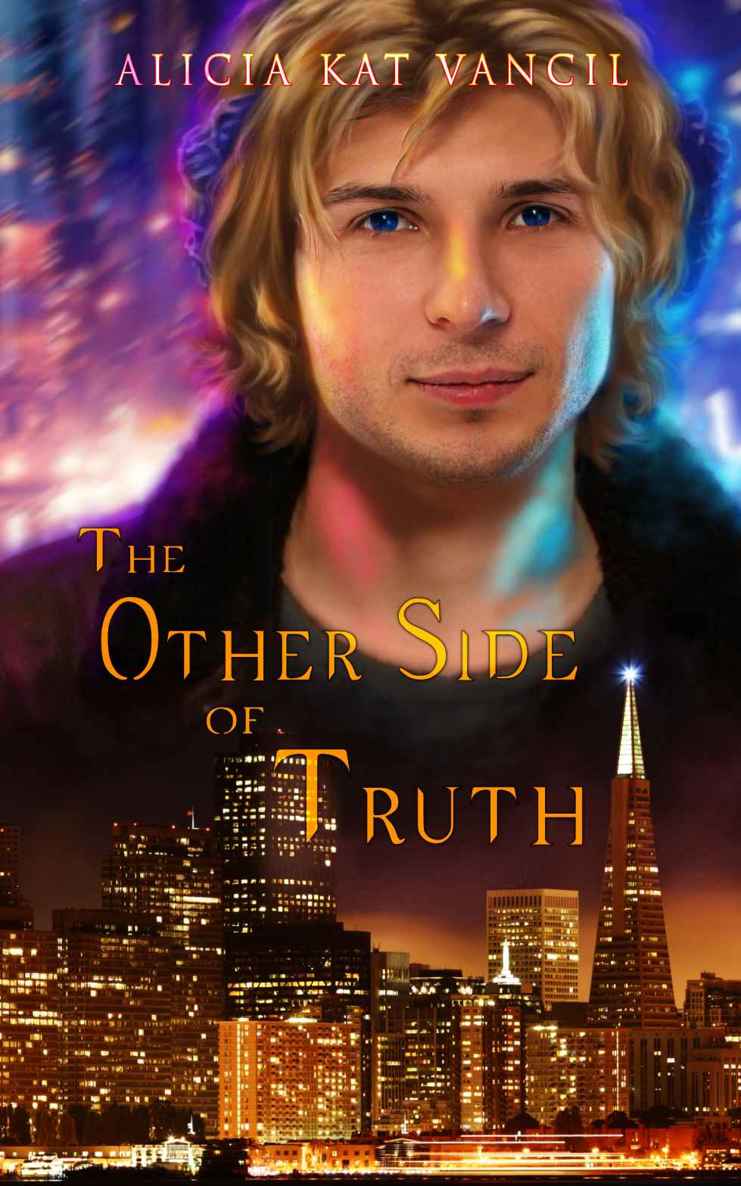 The Other Side of Truth

The Marked Ones Trilogy

Sometimes the truth is more dangerous than a lie.

We all have secrets. Some we keep from others. And some we keep from ourselves. But when your life becomes nothing more than a lethal construct of secrets and lies, one false step could mean your death.

In the wake of overwhelming tragedy, Patrick, Travis, and Nualla are frantically trying to piece their lives back together. Unfortunately, there’s only so much super glue and duct tape you can paste onto something before you have to admit it might be beyond fixing. However, Travis is unwilling to just give up and accept the devastation of the family he has tried so desperately to patch together. But as he delves into the secrets of the past to uncover how his little brother became the most deadly weapon in the Kakodemoss’ arsenal, Travis begins to realize that there are some secrets better left unlearned.

The Other Side of Truth

This book is a work of fiction. Any references to historical events, real people, or real locales are used fictitiously. Other names, characters, places, and incidents are the products of the author’s imagination, and any resemblance to actual events or locales or persons, living or dead, is entirely coincidental.

This eBook is licensed for your personal enjoyment only. It may not be resold, or reproduced. If you’re reading this book and did not purchase it, or win it from the author or publisher during a promotional event, then please purchase your own copy.

The author greatly appreciates you taking the time to read her work. Please consider leaving a review wherever you bought the book, or telling your friends about The Marked Ones, to help her spread the word.

Thank you for supporting Kat’s work.

A Construct of Lies and Betrayal

I
finally gave up looking at
the selection of greeting cards because no matter how long I looked at them, I wasn’t going to find one that said, “I’m sorry I stabbed you.”

I let out a deep sigh that ruffled the plastic and paper of the cards in front of me, and picked up the orange plastic pumpkin candy pail. The convenience store was unsurprisingly packed to the brim with last-minute Halloween shoppers stocking up on “fun-sized” candy, unbelievably clichéd decorations, and glow-sticks. Then I realized the store wasn’t so much
full
as that it was comprised of one single, seemingly endless, line that snaked its way through the store aisles.

Halloween was
supposed
to be fun. It was supposed to be filled with moonlit shenanigans, free candy, and girls in cute little costumes.

Halloween was
supposed
to be filled with her, and us, and dancing till dawn. But it wasn’t. And it never was going to be, ever again. Because I had ruined—
everything
.

I hadn’t seen Nualla since the day of Andraya and Emmy’s funeral, nearly seven weeks ago. And even then, some part of me knew it was over. It was that look in her eyes, that flicker of fear and utter betrayal. The inescapable look that haunted me every time I closed my eyes even for a moment that told me it was over. And even though I
knew
it was over, that there was nothing—absolutely
nothing
—I could ever do to make me something other than a monster in her eyes, I just couldn’t let go. Couldn’t say goodbye. Couldn’t face the fact that I had damaged something so precious in a way that could never be repaired.

In the past weeks, I had stared at Nualla’s number on my phone more times than I could count, my finger hovering over the screen. But I could never make the call, because really, what was I going to say? There was no way to ask forgiveness for something so horrible, I knew that.
Trust me
, I knew it. And after a few weeks, I had pretty much given up any hope of ever finding a way to prove to her just how truly sorry I was. Because no matter what I thought of, when I said it—even in my head—it seemed so hollow and meaningless.

Because it is
, a voice whispered in the back of my mind. More mocking than my own self doubt.

I stared unseeingly at the back of the head of the guy in front of me. Every fiber in my body wanted nothing more than to just go back to Travis’ apartment and curl up alone in the dark. But after weeks of doing mostly that, and not returning Connor’s calls, Connor had basically threatened to camp out at Travis’ doorstep and pound on the door every time I didn’t pick up the phone. And so here I was, after weeks of self-imposed isolation, standing in what felt like the world’s longest fucking line, buying a cheap plastic Halloween pumpkin for my “little sister” and pretending like I wasn’t really just dead inside. A love-sick zombie in a human shell.

What felt like a mind-numbing eternity later, I dropped the plastic candy pail unceremoniously onto the counter so the clerk could scan it, and handed him my card. Not the card Nualla had given me—no, that one was still sitting in a large box of stuff in what was now my bedroom closet—but one Travis had given me earlier today. Mostly, I think because he knew I wouldn’t use the other one, and he didn’t want to give me any excuses not to go outside.

The clerk—who seemed to have more metal piercings than
actual
face—looked at me skeptically as he handed me back my card. “Aren’t you a little old for trick-or-treating?”

I gave him a withering glare as I took back the card and receipt, and shoved them into my backpack. “It’s for my little sister, asshole,” I growled before I picked up the orange plastic pumpkin and stormed out of the open door.

As I passed costumed kids on the street out for a night of fun, I couldn’t stop the feeling of desperate longing and self-loathing that mixed like food poisoning in my stomach. Halloween had always been my favorite holiday. Putting on a costume to become someone else—someone
awesome
—if only just for a day, and getting free candy. What could be better than that? But now, all it did was remind me that I had been wearing a mask my whole life, and I wasn’t even sure anymore where the mask ended and the
real
me began. Or if there
was
even a real me to begin with.

Nearly everything about my life had been a lie.
I
had been a lie. And it was a little hard to swallow that with a smile. To just move on. To return to being “normal.”

Two.
I had been only
two
years old when the Kakodemoss had murdered my parents and took me, making me part of their horrific project. And as if keeping me captive for over fifteen years and experimenting on me wasn’t bad enough, they had surgically implanted chips into my body to control me. To be able to switch my soul between Patrick and Aku like one would switch on a light. Like I was a remote control person, a cybernetic golem. A robot.

I looked down at the thin silver bracelet on my wrist. Try as I might, it was hard not to feel like a lab animal. It might not have been in my head like the Kakodemoss chip, but it was still tracking me so they’d know where I was at all times. Because as much as the Grand Council thought I was a victim, they also thought I was a potential danger. A monster hiding behind a smile. And the sad, sick truth of it all was that they were right.

I turned a corner, my eyes still tracing the shape of the metal bracelet, and ran into someone.

As a bag of groceries hit the sidewalk, my eyes darted up to their owner. “I’m really sorry, I wasn’t looking—”

Two large, blue and golden flecked eyes looked back at me in pure, unadulterated fear.

“
Amurai suna Kalo
,” the female daemon breathed in a trembling voice before she turned and ran. Her long black braid swinging from side to side as her feet pelted the pavement.

And it wasn’t until she was disappearing around the side of a building that I even realized that her horns were a dusky red color instead of blue.

I just stared after her in shock. The girl—the Kakodaemon—she looked so much like— And even though I knew what was coming it still stole my breath when the pain surged through me. I leaned against the building as another headache ripped through my head, bringing with it even more memories.

A long white hallway, and a girl with a long black braid walking down it in front of me.
8+6=14
carved deeply into the base of a wall. The look in her eyes—in Nualla’s eyes—as I shoved the
tantō
blade through her. It all flashed by like rapid heartbeats, nauseating, and jarringly vivid and surreal in the same breath.

Let me out! You have to let me out! Please!
a voice pleaded within my head.

I doubled over, and put my shaking hands on my thighs, trying not to throw up. Some times were more painful than others. This was one of those times. Like an army of angry crabs were living inside my head, trying to claw their way through my skull. But as terrible as everything else was—the headaches, the tracker bracelet, the lost years and lies—nothing was as bad as the fact that the Kakodemoss had tried to make me murder my own wife—my
One
—with my own hands.

When the rush of pain finally faded away into the background, I stooped down and picked up the orange plastic candy pail.

“Are you okay?” a girl’s voiced asked from in front of me.

I stood back up a little too quickly. The dizzying double image of a blond girl in an abused, striped green sweater tank, skull-adorned pleated leather skirt, and fur boots, swimming in and out of focus in front of me. Blond hair so very much like Chan-rin’s. Moon-pale with a slight wave to it.

“Yeah I’m fine. Just dizzy,” I admitted with an unsteady intake of air.

The girl eyed me dubiously. “Maybe you should lie down.”

I couldn’t help the crazed bark of a laugh that escaped my lips. “Frankly, what I’d love—more than anything—would be to crawl into a hole and die. But I have places to be,” I replied with an off-kilter smile as I moved past the girl. And it wasn’t a lie—not
really
.

The only reason I was even out traipsing around outside was because as fucking awful as my life was, somebody else’s life was worse. Because the only thing worse than realizing your life was a lie, was realizing it
wasn’t
. Like Chan-rin. My “little sister.” The little eight-year-old girl who had never even set foot outside the Kakodemoss facility walls until the day she came to find me. Who had never had a
real
Halloween.

And if it was the last good thing I did before I died, I was going to make sure she at least had a real fucking good first Halloween.