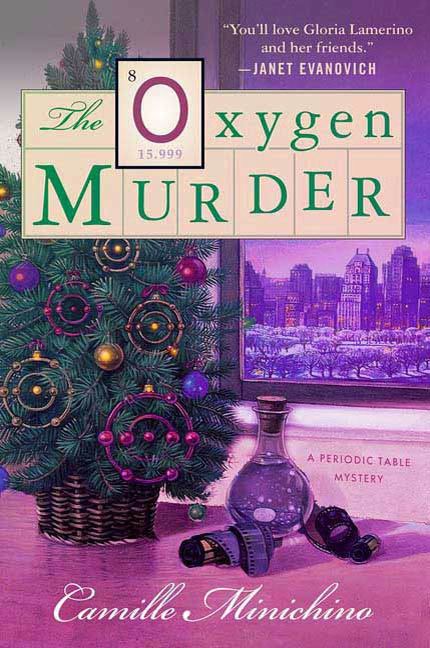 T
HE
B
ORIC
A
CID
M
URDER

An imprint of St. Martin’s Press.

THE OXYGEN MURDER
. Copyright © 2006 by Camille Minichino. All rights reserved. Printed in the United States of America. No part of this book may be used or reproduced in any manner whatsoever without written permission except in the case of brief quotations embodied in critical articles or reviews. For information, address St. Martin’s Press, 175 Fifth Avenue, New York, N.Y. 10010.

For my dear sister, Arlene Minichino Polvinen, who delivered
life-saving oxygen throughout her long career in anesthesia

As usual, I drew enormous amounts of information and inspiration from Robert Durkin, my cousin and expert in all things mortuary, and from Inspector Christopher Lux of the Alameda County, California, District Attorney’s Office.

Any misinterpretation of such excellent resources is purely my fault.

Special thanks to Marcia Markland, my wonderful editor, who has been with me in one way or another from my first book; and to my patient, extraordinary agent, Elaine Koster.

I’m most grateful to my husband and webmaster, Dick Rufer, the best there is. I can’t imagine working without his love and support.

Y
ou’d think it would be impossible to find yourself alone in New York City. Especially on a bright Sunday morning in December, only a couple of blocks from the dazzling supersigns of Times Square.

A short distance away, elbows and shoulders overlapped at crowded intersections. Couples and families had to hold hands to stay together. Holiday shoppers, packed as close as particles in a nucleus, strained their necks toward the glittery, animated ads for cameras and underwear, baby clothes and whiskey, surround-sound systems and Dianetics.

But here I was, the only person in the tiny, dark lobby of a narrow brick building, about to enter the smallest, oldest elevator I’d ever seen. Picture a dusty reddish-brown box with metal construction on three sides and a rickety accordion gate on the fourth. I hoped the indentations peppering its walls were only coincidentally shaped like bullet holes.

The blast of heat, comforting at first after the near-freezing temperature and gusty wind outside, now added to the swirls of dust around my nostrils.

I stepped inside the cage and pulled the squeaky gate across the opening. In the back corner, a janitor’s bucket and mop took up a quarter of the floor space. The smell of chlorine tickled my nose.

I could hardly breathe.

I looked up at the dented metal ceiling. Too bad there were no oxygen masks, like those demonstrated by our flight attendant on the plane from Boston’s Logan Airport.

I was no stranger to creepy environments—hadn’t I lived above my friends’ funeral parlor for more than a year? Done my laundry a few meters from their inventory of preservative chemicals and embalming fluid? Still, an uneasy feeling crept over me in the unnatural quiet of this space. I hunched my shoulders and pushed a scratched button with a worn-down label. Number
4
, I hoped. I worked my jaw to loosen it.

The elevator jerked into motion.

I longed for a sign of life, some sound other than the creaking machinery of the old cage. Where were the alleged eight million citizens of the nation’s largest city? Not to mention the hundred thousand or so tourists supposedly passing through JFK every day. Where were the blaring car horns, the noisy taxis, the thundering buses? Where were the sirens of the famous NYFD? The old building seemed soundproof, leaving no noise inside except that of the whirring, rasping gears taking me upward toward . . .
what?

It had seemed like a good idea at the time. Four of us had flown into La Guardia two days ago, but everyone else was too busy for this errand. My best friends, Rose and Frank Galigani, were having breakfast with relatives, the parents of their daughter-in-law, Karla, who was originally from New York. My husband of four months, homicide detective Matt Gennaro, was tied up, so to speak, at a police conference, which is what had brought us all to New York City in the first place.

The House of Special Purpose by John Boyne
The Tower Mill by James Moloney
Love of the Wild by Susan Laine
A Knight’s Enchantment by Townsend, Lindsay
The Alpha's Heart (Wilde Creek Two) by R. E. Butler
¡A los leones! by Lindsey Davis
Going Gone by Sharon Sala
The Age of Dreaming by Nina Revoyr
The Exploits of Moominpappa (Moominpappa's Memoirs) by Tove Jansson
Comeback by Dick Francis
Our partner