Read The Panther and The Pearl Online

The Panther and The Pearl 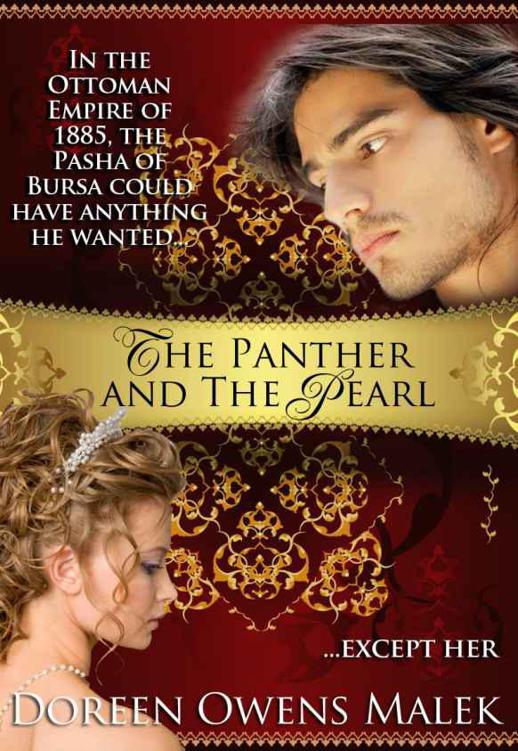 The author asserts the moral right to

All rights reserved. Except for use in any review, the reproduction or utilization of this work in whole or in part in any form by any electronic, mechanical or other means, now known or hereafter invented, including xerography, photocopying and recording, or in any information storage or retrieval system, is forbidden without the permission of the publisher.

All the characters in this book have no existence outside the imagination of the author and have no relation whatsoever to anyone bearing the same name or names. They are not even distantly inspired by any individual known or unknown to the author, and all incidents are pure invention.

For my lost daughter

Who dwells with the angels.

And for my found daughter,

An angel on earth.

“Are you going to rape me?” Sarah asked in English, trying hard to keep the fear from showing in her voice.

Kalid Shah devoured her with the intense dark eyes she remembered from their previous meeting. The eunuchs on either side of her, their oiled black skins gleaming, held her in place with grips of iron.

“If I chose to do so, there would be no one here to stop me,” Kalid replied flatly in the same language, with a British accent. He made a slight dismissive gesture and the eunuchs released her, stepping back. He said another short word abruptly and they left the room, bowing their way out.

Sarah looked around the ornate apartment of the Orchid Palace, then into the flowering courtyard beyond, with its splashing fountain, marble bathing pool and cages of colorful birds; it was a smaller, less elaborate version of Topkapi.

The pasha’s dismissal of his servants was understandable. There was absolutely nowhere for her to run.

“Why am I here?” Sarah demanded, with as much spirit as she could muster under the circumstances.

“You belong to me now,” Kalid said simply. “I may do with you as I please.”

“In my country we do not purchase people!” Sarah burst out, indignation overriding caution.

“In your country people were purchased regularly until quite recently—about twenty years ago, I think,” he said, smiling slightly.

“Our late President Lincoln outlawed such slavery,” Sarah replied, irritated at being corrected. “And anyway, I’m from Boston. We were not involved in that awful trafficking in human lives.”

“Boston is not part of the United States?” he said dryly.

“When my cousin hears what has happened to me you will be in serious trouble!” Sarah said angrily, changing the subject deliberately.

His smile widened. “I am the law here. Your kinsman...” he snapped his fingers... “is powerless in Bursa.”

Kalid threw back his head and laughed, displaying the striking white teeth of a predator. “Talkers,” he said contemptuously. “It will take them six months to decide what to do. In the meanwhile, you are mine.”

Sarah stared at him mutinously, unable to reply. He had shaved off his short dark beard since she had last seen him, revealing the smooth golden olive skin of a face stamped with the aristocratic arrogance expected of the prince of Bursa. There were twin curves in his cheeks where dimples would appear when he smiled, and he had a shallow cleft in his chin. His nose, slightly beaked, rose above a sculptured mouth with a full, sensual lower lip. His hair, the dense, shadeless black of the east, curled over his high forehead and around his ears, glossy and thick. He stood a head taller than she did, slim and straight, his embroidered white caftan slit open at the throat to reveal the mat of sable hair on his chest. He was, in fact, quite startlingly handsome, which added immeasurably to the uncertainty and confusion Sarah was feeling.

Kalid reached out suddenly and lifted a lock of golden hair from her shoulder, wrapping it around his dusky finger. Sarah stiffened and pulled back; he drew her closer with a slight, but insistent, pressure until she succumbed and stumbled forward.

He let the hair fall and traced the line of her bare throat with his forefinger, down to the cleft of her breasts revealed by the deep neck of her gauzy blouse. Sarah sucked in her breath as he moved his finger and rested the tip of it lightly on her nipple. Rouged with henna by the harem women who had prepared her for him, it was easily visible through the sheer silk she wore. He circled it lightly, then more firmly, until it rose and hardened at his touch.

Sarah dropped her eyes as she felt the color climbing into her face, then forced herself to lift her head and meet his burning stare defiantly. Then she slapped him as hard as she could.

He didn’t flinch, merely held her gaze for a long moment, then withdrew his finger. In a flash he had seized her hair again and wound the length of it around his hand, pulling her so close to him that she was trapped against his shoulder, his nose inches from hers. It was extraordinary; he wasn’t hurting her, but neither was she able to move. She stared up at him, frozen, as his black eyes with their lush lashes seemed to fill the entire world.

“I could have you killed for that,” he said softly. There was no mistaking the menace in his tone.

It was a long moment before Sarah managed a reply. She drew a breath and licked her lips. “But then you would lose your investment, donme pasha,” she said levelly.

He released her so suddenly that she reeled; by the time she regained her footing he was regarding her impassively.

“Perhaps I would consider it money well spent,” he said.

“Are you disappointed, then?” Sarah said sarcastically. “Am I not as pliant as you anticipated? Perhaps for such a high price you expected a docile horse. You should have examined your prize a little closer before buying. This filly bites.”

“Any horse can be broken to the bit,” he said quietly. “In time even the wildest, fiercest filly comes to anticipate with pleasure the hands of its master.”

“You will be disappointed,” Sarah said tonelessly.

“I will not be disappointed,” he replied confidently. “This is only the beginning.”

“Sultan Hammid got the best of your deal, pasha,” Sarah said. “He has your heirloom and your money and you have a ringer for a courtesan.”

“Force will not be necessary.” He cupped her chin in his hand and turned her face to the light. “You will beg me to take you,
kourista,
” he said silkily, “and then beg me not to stop.”

“Never,” Sarah said through gritted teeth, jerking away from him. “I won’t be worth the work, trust me. Just let me go.”

“What, return you to the Sultan?” He seemed amused.

“He’ll see that I’m released to my cousin. Maybe he’ll even give back what you paid for me,” she said hopefully.

Kalid shook his head. “It is not a matter of price. Sultan Hammid is unaware that my bargaining was a game, a sham. I would have surrendered anything he asked for you.”

Sarah was stunned into silence. Almost despairing, she realized that this man was long accustomed to getting what he wanted, and what he wanted now was Sarah Woolcott.

He clapped his hands suddenly and the eunuchs reappeared, as if from the air.

“What is happening?” Sarah asked, looking around in a panic. What was Kalid doing now?

“They will take you back to your quarters in the harem,” Kalid said, turning away. Before Sarah could say anything further she was ushered into the tiled hallway and escorted back to her room.

Kalid listened as their footsteps faded in the distance, then walked over to the samovar and poured himself a cup of thick Turkish coffee. His father would have called a servant to perform even this simple task, but he was not his father, and therein lay his problem. His life formed an uneasy bridge between east and west, like the ancient city of Constantine, and he was at home in neither hemisphere.

Kalid shoved the cup aside disgustedly and reached for the decanter of raki on the table. He poured half a glass of the colorless liquid, added water to turn it white, then dashed it off in one gulp, inhaling as the fire spread through his belly.

It had not gone well. The American woman hated him. Kalid sighed; it was to be expected. The whole world knew how independent they were, Americans and their women. He had accepted the situation when he saw her in the Sultan’s harem and heard who she was.

Kalid poured a few more drops of liquor into his glass and swirled it thoughtfully. She would set him a task, but it would be worth it in the end. She was fiery; together they would make a beautiful blaze. He wanted her to reciprocate in the western way, to come to him willingly and meet his fierce desire with her own. There was no triumph in coercing an unwilling woman, that was for cowards; the real victory lay in transforming an initially reluctant opponent into an eager, trembling partner in love.

But that would take time. He’d made a bad beginning, acquiring her as brutally and bloodlessly as he had, but there was no choice. If he had not acted swiftly, she would have ended her stay in the Sultan’s harem and gone back home. He would never have seen her again.

The idea was insupportable. He had to have her. His grandmother said he had been bewitched by the blue eye, just like his father, and perhaps it was true. He had a house full of women, and he wanted none of them- none but her. When he’d first seen her in the Grand Hall at Topkapi, she had met his gaze challengingly above her face veil, not averted her gaze in the coy manner of the harem women. He had been riveted. And when he noticed her pale gaze following after him with undisguised interest, he had been lost.

She was not indifferent to him, no matter how haughtily she behaved. She felt something, and it was powerful, even if she wouldn’t admit it to herself. He knew his effect on women and he knew he was not wrong. But he must fan that spark hard enough, and long enough, to overcome her outrage at the way she had been taken.