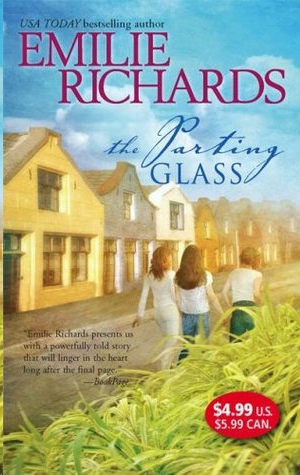 Praise for the novels of
EMILIE RICHARDS

“(A) heartfelt paean to love and loyalty.”

—
Publishers Weekly
on
The Parting Glass

“A flat-out page turner…reminiscent of the early Sidney Sheldon.”

“[Emilie Richards] adds to the territory staked out by such authors as Barbara Delinsky and Kristin Hannah with her hardcover debut, an engrossing novel…. Richards’s writing is unpretentious and effective.”

“Richards pieces together each woman’s story as artfully as a quilter creates a quilt, with equally satisfying results, and her characterizations are transcendent, endowed with warmth and compassion.”

“Richards stitches together the mystery of a family’s past with the difficulties and moral dilemmas of the present for a story as intriguing as the quilt itself.”

Watch for Emilie Richards’s next novel

My thanks to fellow writers Karen Young, Diane Chamberlain and Patricia McLinn for their affectionate support and feedback during the creation of
The Parting Glass,
and to Damaris Rowland for her insights and suggestions. I’m grateful, too, for Madelyn Campbell’s considerable medical expertise and her willingness to share it.

A very special thank-you to all the readers who asked me to continue the Donaghue story, and particularly those at Cleveland’s Irish Cultural Festival who related their personal stories of Whiskey Island and prodded me to look into Cleveland’s bootlegging past and mysterious tunnels.

Special thanks to Michael McGee, who accompanied me on two research trips to County Mayo during particularly rainy weather and almost never complained. And as always, thanks to my talented editor, Leslie Wainger, who never fails to inspire and encourage.

Of all the money ere I had,

I spent it in good company,

And all the harm I’ve ever done,

Alas was done to none but me

And all I’ve done for want of wit,

To memory now I can’t recall

So fill to me the parting glass,

Good night and joy be with you all.

Of all the comrades ere I had,

They’re sorry for my going away,

And all the sweethearts ere I had,

They wish me one more day to stay,

But since it falls unto my lot

That I should go and you should not,

Good night and joy be with you all.

(This is a traditional Irish ballad for singing at the end of an evening, a gathering or an event. One of Ireland’s most popular, it is documented as far back as the 1770s.)

So many years and so many miles separating us, dear brother. For centuries we McSweeneys knew nothing of loneliness but everything of each other. And what else was there to know? What else is there in the end but family, land and church? The rest is like butter on bread, mere pleasure with little nourishment.

Now our family has been dumped like ship’s ballast on distant shores. You in Ohio, our dear sisters in Australia, Nova Scotia and the grave. We are old, all who remain, and separated by much more than miles. We know so little of each other now. I have the new photograph that St. Brigid’s made for you, and I thank you for sending it, but what happened to the young man I knew, so straight and tall? What happened to the priest with fire in his gaze and vitality in his step? Has he gone the path I’ve trod myself? The path that leads to only one destination?

I cannot imagine you as an old man, dear Patrick. You only celebrate Mass on Holy Days, hear confession but infrequently, read for hours each day and contemplate? What exactly do you consider now that your time is your own, my brother? The years you have already lived? The green island of your birth? Our dear, dear land that McSweeneys will never work again?

Perhaps, had I married, I might find more to do with my own time. I would have grandchildren and great-grandchildren, and I would dandle them proudly on my knee. Instead, with no family to succeed me, I think only of the family from which I came, of you and Ciara and Selma, of dear Una who was with us such a short time. Not a one of us with offspring of our own, and a long proud line in ashes at out feet.

I remember all, even at this final juncture of my life. I remember songs and laughter, the fragrance of bread baking on a stone hearth, the bleating of sheep in our paddock. I remember a small lad tugging at my skirts, saying his prayers with a childish lisp, cowering behind closed doors for fear of the boogeyman on nights when Mayo’s bog land was cold and misty.

How fortunate I am to have these memories to comfort me. How fortunate are all who have had family to cherish. This can never be taken from us, dear Patrick. No matter the years that separate us, you and all our loved ones are always with me.

P
eggy Donaghue avoided the parking lot of the Whiskey Island Saloon whenever she could, which wasn’t easy since she lived directly above it. On days when there was no parking on the street, she reluctantly took the reserved spot closest to the back door and sprinted for the kitchen. She wasn’t superstitious. She just didn’t believe in tempting fate.

Not unless the circumstances were exceptional.

The young man standing just behind her cleared his throat. “It’s real windy, Ms. D. You don’t have to stay out here. Nothing’s going to happen, I promise.”

Peggy pulled her long chestnut hair into a temporary ponytail so it would stop whipping into her eyes. Over one shoulder she could see that Josh, tall, lanky and clearly uncomfortable, wasn’t looking at her. That was understandable. Josh had just stolen his very first car. He was praying, just as Peggy was, that the owner wouldn’t realize his brand-new Honda Civic was missing.

“I trust you, Josh. And I even trust them.” Peggy nodded to the group of four adolescent boys who were poring over the car like melted butter on the saloon’s Friday night pierogi special. “But I’ll just stay here in case they need me.”

“Nick was locked away in his study. When he gets like that, he doesn’t know what’s going on. He’s not going to know.” Josh’s tone was less certain than his words.

“He’s probably got stuff to do before he leaves town.” Peggy saw a familiar figure coming up between the rows of cars. The willowy strawberry blonde was unmistakable—and related. “Uh oh, we’ve been nailed,” she said in her best Jimmy Cagney imitation. “It’s the calaboose for us now, Scarface.”

Peggy waved him away. “You go on. I’ll face the music alone.”

Josh looked properly grateful and took off, skirting Peggy’s older sister by ducking behind the back row of cars. Plastic bags and newspaper from somebody’s blown-over garbage can skittered across the lot in his wake.

Casey Donaghue Kovats came up beside Peggy and stood for a moment watching the group of adolescents tape strings of firecrackers to the back bumper of Niccolo Andreani’s car. The silver Civic was parked close to the back door of the saloon so that it would be out of sight from the road.

“You’re letting those kids tape fireworks to the bumper? You worked in an emergency room. You know how dangerous those things are.”

“Peggy, have you lost your mind?”

“Fireworks
are
dangerous. These are firecrackers, and they’re only slightly higher-tech than tin cans and old shoes.”

“Megan’s going to have a fit.”

“I certainly hope so. We’ve gone to a lot of trouble.” Peggy motioned to one youth, a handsome young African-American with meticulously divided cornrows and a roll of duct tape adorning one arm. “Winston, will you please reassure Casey that Nick’s car won’t blow up?”

Winston abandoned his supervisory post to join the two sisters. “Yo, Ms. K. Nothing gonna happen here but a little noise.”

Casey still didn’t look convinced. “I have great faith in your abilities, Winston, really I do, but what if—and I know this is a remote possibility—you’re wrong?”

“Can’t be wrong. We tried it out yesterday.”

“Yesterday?” Peggy was intrigued. This was new information.

“Yeah, at some wedding. Somebody got married down at the Baptist church.”

Winston shrugged. “Learned a lot. Like don’t put balloons and firecrackers on the same bumper, unless you want a real mess.”

Peggy tried not to smile. “See? I told you we were in the hands of a master.”

Winston escaped back to his job as Casey rolled her eyes. “I can’t believe Nick had the bad judgment to leave his car at the saloon in the first place,” Casey said.

“He didn’t. Josh delivered it half an hour ago. Nick doesn’t know it’s gone.”

“Then how’s he getting to the church?”