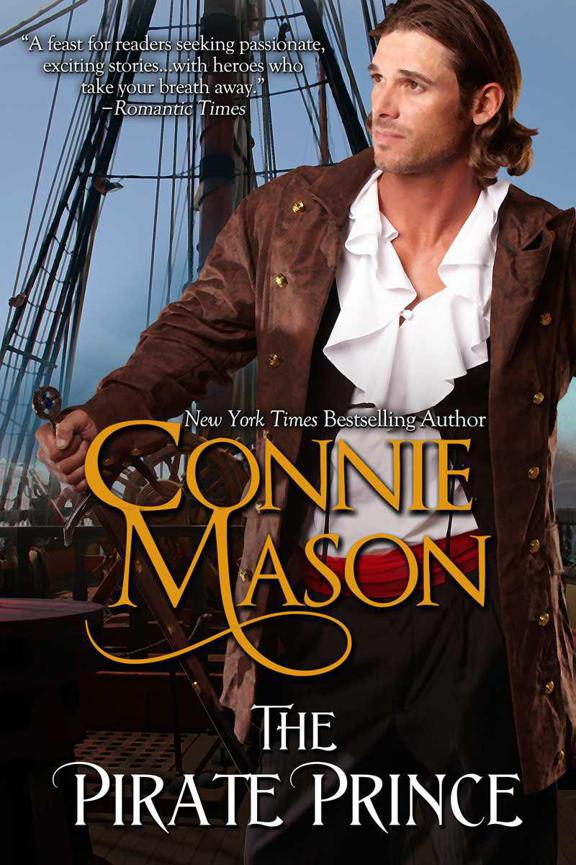 “A delight… This is a must-read for Mason fans.”

SEDUCED BY A ROGUE

THE ROGUE AND THE HELLION

“Ms. Mason has written another winner to delight her fans who want sexual tension that leads to hot explosion, memorable characters and a fast-paced story.”

THE LAIRD OF STONEHAVEN

“[Ms. Mason] crafts with excellence and creativity…[and] the added attraction of mystery and magic. [The reader will] enjoy the facets of the supernatural that permeate this wonderful love story.”

“This is a real keeper, filled with historical fact, sizzling love scenes and wonderful characters.”

“
Jess
is filled with adventure and passion. Ms. Mason delivers.”

“Ms. Mason has created memorable characters and a plot that made this reader rush to turn the pages….
Gunslinger
is an enduring story.”

“Ms. Mason has written interesting characters into a twisting plot filled with humor and pathos.”

“Connie Mason at her best! She draws readers into this fast-paced, tender and emotional historical romance that proves love really does conquer all!”

“An utter delight from first page to last—funny, tender, adventurous and highly romantic!”

“Connie Mason has done it again!”

“A lovely romance and a fine historical!”

Dariq lurched from the bed and glared down at her, stunned by his loss of control. The woman was dangerous. The sooner he placed her in Ibrahim’s keeping the better.

“That will not happen again, lady. You will cease using your wiles on me.”

Willow rolled to her feet. “You are mad if you think I wanted you to…to attack me. All I want from you is my freedom.”

“What you ask is impossible.” So saying, Dariq turned and strode from the cabin.

Willow sank down upon the bed, shaking from her horrified reaction to Dariq’s words. She would never resign herself to becoming a sex slave to a heathen Turk.

She touched her lips. They felt swollen; so did her breast where Dariq had touched it. The pirate was the devil incarnate, and far too handsome for her peace of mind.

THE LAIRD OF STONEHAVEN

TO LOVE A STRANGER

SEDUCED BY A ROGUE

TO TAME A RENEGADE

A LOVE TO CHERISH

THE ROGUE AND THE HELLION

SURRENDER TO THE FURY

LORD OF THE NIGHT

LOVE ME WITH FURY

A PROMISE OF THUNDER

TREASURES OF THE HEART

WILD IS MY HEART

Prince Dariq, second son of Murad, the recently deceased ruler of the Ottoman Empire, slept peacefully beside his concubine, his body sated and his mind at ease. Since his plush chambers were far removed from the main part of the palace, the prince remained blissfully unaware of his older brother Ibrahim’s vile scheme to slay his male siblings. Killing all the other male heirs would assure him that no one would be left alive to challenge his claim to the sultanate.

Suddenly a secret panel leading into Dariq’s private bedchamber slid open; a woman stepped inside. The woman pulled Dariq’s concubine from his arms.

“Go, Fatima,” Saliha Sultana whispered, giving the startled girl a push toward the secret passage. “Return to the harem immediately.”

Startled awake by the commotion, Prince Dariq rose up on his elbow. When he saw his mother urging his concubine
into the secret passage, he knew mischief was afoot. His mother rarely left the harem and never entered his chambers in the dead of night.

“Hurry, my son,” Saliha urged. “Get dressed. You must leave immediately. Ibrahim has slain his brothers. Even as we speak janizaries loyal to Ibrahim are on their way here to murder you.”

Horror darkened Dariq’s gray eyes. “My brothers are dead? All of them?”

“Aye, my son, even young Alkbar is gone.”

Dariq pulled on baggy trousers and shirt, stomped his feet into boots and reached for his scimitar. “I will avenge their deaths, Mother.”

“Do not be foolish, Dariq,” Saliha Sultana chided. “You will be cut down the moment you leave your chambers. You must flee. I know your ship is due to sail soon. Flee to the harbor and sail far away, where Ibrahim cannot find you.”

Even as Saliha spoke, Dariq heard footsteps echoing through the deserted hallways. They were coming for him.

“Here,” Saliha said, offering Dariq a heavy cloth bag. “Take this. Inside are the gold and precious gems your father gave me while he was alive. I cannot bear that you should go away with nothing.”

“I cannot take them, Mother. They are yours.”

“I have no further use for them, son.”

The door opened. Dariq grasped his scimitar, prepared to kill as many of Ibrahim’s janizaries as he could before he himself was slain. Mustafa, the captain of Dariq’s personal guard, a giant of a man with eyes as black as his flowing beard, entered the chamber.

“Your loyal guardsmen are stationed outside the door, Prince,” Mustafa reported. “We will hold off the janizaries while you make good your escape.”

Saliha thrust the cloth bag of valuables into Dariq’s hands. “Leave nothing of value behind,” she advised, casting a glance around the elegantly appointed bedchamber.

Moving swiftly, she gathered up gold plate and silver, gem-encrusted bowls, and anything else of value she saw, and dropped them into a satin pillowcase. She thrust the pillowcase into Dariq’s hands and pushed him toward a door opening onto a narrow balcony.

“You can escape over the rooftops and through the alleys to the harbor. Go with God, my son.”

Dariq’s handsome features settled into stubborn lines. “I am not leaving without you, Mother.”

Saliha Sultana sent her son a stern look. “You will do as I say. I do not fear Ibrahim. He needs me to keep peace in the harem. Even as we speak, your father’s concubines are mourning their slain sons. I must stay with them.”

“Listen to your mother,” Mustafa interrupted. “Kamel will see that no harm comes to her. He is the most powerful eunuch within the seraglio. He has the ear of Selim Pasha, the Grand Vizier. Trust him to keep Lady Saliha safe. You must live to avenge your slain brothers.”

The thunder of footsteps and jangle of weapons grew louder, louder even than the heartrending cries drifting through the seraglio from the harem as mothers mourned their children. “How many men are still loyal to me?” Dariq asked.

“Of your twelve personal guardsmen, none has deserted you,” Mustafa said. “They will hold off the janizaries as long as they can. Their lives are naught compared to yours, my prince.”

“Nay!” Dariq cried. “No more deaths. Summon them inside. I wish to speak to them.”

“Dariq, please,” Saliha begged. “There is no time.”

Mustafa opened the door and motioned for the armed guardsmen to enter the crowded bedchamber.

“You have proven your loyalty to me,” Dariq began, “but I do not want you to lose your lives on my behalf. Flee while there is still time.”

Saliha Sultana knew by the determined look on Dariq’s face that he intended to fight Ibrahim’s janizaries alone. She knew her son well. To his way of thinking, running was the coward’s choice. She glanced at Mustafa and knew by his expression that he had come to the same conclusion. A slight nod of Saliha’s head was all Mustafa needed to act.

Dariq was still urging his guardsmen to flee when Mustafa raised his scimitar and brought the handle down on Dariq’s head. Mustafa caught him before he fell and hoisted his prince over his massive shoulder.

“Hurry,” Saliha urged. “Take my son, and as many guardsmen as are willing to join him in exile, to his ship. I trust you to protect him, Mustafa.”

“Aye, my lady. Fear not, I will keep Prince Dariq safe.”

To a man, Dariq’s guardsmen agreed to accompany him wherever he might lead, even to the ends of the earth.

A loud banging sounded on the door. “They are here, Mustafa,” Saliha Sultana hissed. “Kamel’s cousin Hassan is a carpet seller. He has a stall in the souk. Tell Dariq to contact Hassan whenever he is able. He will pass your message on to Kamel and Kamel will tell me.”

With a sob, she tore herself away and slipped into the secret passage, closing the panel behind her.

“Lock and barricade the door,” Mustafa ordered as he stepped onto the balcony and leaped over to an adjacent roof with an unconscious Dariq slung over one broad shoulder, “and bring the pillowcase.” One guardsman
snatched up the pillowcase stuffed with valuables while another barricaded the door; then they all followed Mustafa over the rooftops.

Jumping from rooftop to rooftop, Mustafa and the guardsmen made their way to the high wall surrounding the seraglio. One by one each man slid down a tiled roof overhanging the wall and jumped the few feet to the ground. Mustafa handed Dariq down to a man on the ground before leaping himself and once again taking Dariq over his shoulder. The janizaries were not far behind; their shouts spurred Dariq’s men on as they sprinted toward the harbor.

Unerringly Mustafa led them through the city and into the maze of alleyways stretching through the souk. But they weren’t safe yet. Judging from the noise of crashing stalls, loud shouting, and pounding footsteps, the entire Turkish army was hard on their heels. As long as Dariq lived, he would always present a threat to the sultanate. Nothing short of Dariq’s death would satisfy Ibrahim.

As they raced through the sleeping city, Dariq struggled back to consciousness. “Put me down!” he roared.

Mustafa set him on his feet.

“What have you done?”

“Saved your life, master. We must hurry; the janizaries are not far behind.”

Realizing that he had no choice now but to flee, Dariq led his loyal followers to the docks. His ship,
Sultana
, was due to sail with the midnight tide. Dariq had no idea whether the midnight hour had come and gone, so he prayed that his ship had not yet left. Without the
Sultana
, he and his men would never live to see the light of day.

When they reached the docks, Dariq let out a shout of joy. The
Sultana
was still docked, though frantic preparations were under way for imminent departure. Dariq made
a dash for the long stone pier as the gangplank was being raised. He shouted until someone aboard the ship heard him. He ordered the gangplank to be lowered. Nothing happened until the captain appeared at the railing.

“Who is there?” the captain asked in a booming voice.

“Prince Dariq. Lower the gangplank. My men and I wish to come aboard. And hurry. My brother’s janizaries are hard on our heels.”

The gangplank was lowered immediately; Dariq and his men scrambled aboard. “Pull up the gangplank! Quickly,” Dariq ordered.

The anchor was raised, and the sails filled with wind as the janizaries charged down the pier. Dariq took the wheel, easing the
Sultana
away from the pier and into the Sea of Marmara. Beyond the Bosporos Straits and the Aegean Sea, a new life awaited him.

The True Blue Scouts of Sugar Man Swamp by Kathi Appelt
Torched: A Thriller by Daniel Powell
Will You Won't You Want Me?: A Novel by Nora Zelevansky
The iCongressman by Mikael Carlson
On Thin Ice by Anne Stuart
Savage Cinderella by PJ Sharon
V.J. Chambers - Jason&Azazel Apocalypse 01 by The Stillness in the Air
Friends for Never by Nancy Krulik
Never Blame the Umpire by Fehler, Gene
Playing Catch: A Baseball Romance by Ayala, Rachelle
Our partner