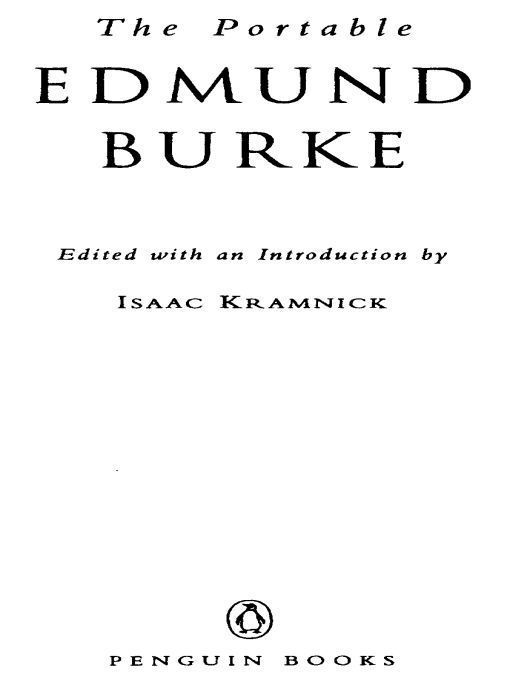 Table of Contents
THE VIKING PORTABLE LIBRARY
Title Page
Copyright Page
Introduction
PART I - CULTURE AND HISTORY
The Reformer
THE CHARACTER OF A FINE GENTLEMAN
A Vindication of Natural Society
A Philosophical Inquiry into the Origins of Our Ideas of the Sublime and the Beautiful
Fragment—An Essay Towards an History of the Laws of England
Book Reviews in the Annual Register
Speech on the Repeal of the Marriage Act
Speeches on Religious Establishment and Toleration
PART II - POLITICS AND SOCIETY
Thoughts on the Present Discontents
Speech on the Middlesex Elections
Speech at Mr. Burke’s Arrival in Bristol
Speech on Economical Reform
Speech on a Bill for Shortening the Duration of Parliaments
Speech on a Committee to Inquire into the State of the Representation of the ...
Sketch of a Negro Code
Thoughts and Details on Scarcity
A Letter to a Noble Lord
PART III - AMERICA AND REVOLUTION
An Account of the European Settlements in America
Observations on a Late Publication Entitled “The Present State of the Nation”
Speech on American Taxation
Speech on Conciliation with the Colonies
Address to the British Colonists in North America
A Letter to the Sheriffs of Bristol on the Affairs of America
PART IV - IRELAND AND CATHOLICISM
Tract on the Popery Laws
Address at Bristol on the Gordon Riots and the Catholic Question
A Letter to a Peer of Ireland on tHe Penal Laws Against Irish Catholics
Letter to Sir Hercules Langrishe
A Letter to Richard Burke, Esq., on Protestant Ascendancy in Ireland
A Letter to William Smith, Esq., on the Subject of Catholic Emancipation
PART V - INDIA AND COLONIALISM
Speech on Mr. Fox’s East India Bill
Speech on the Nabob of Arcot’s Debt
Speeches on the Impeachment of Warren Hastings
PART VI - THE FRENCH REVOLUTION
Speech on the Army Estimates
Reflections on the Revolution in France
An Appeal from the New to the Old Whigs
Thoughts on French Affairs
Letter to a Member of the National Assembly
Letters on a Regicide Peace
PART VII - SELECTED LETTERS
To the Duke of Richmond
To William Burgh, Esq.
To the Marquis of Rockingham
To Mons. Dupont
To Philip Francis, Esq.
To Captain Mercer
To Chevalier de la Bintinnaye
To William Weddell, Esq.
To William Elliot
FOR THE BEST IN PAPERBACKS, LOOK FOR THE
THE VIKING PORTABLE LIBRARY
EDMUND BURKE
EDMUND BURKE (1729-97) was born in Dublin, and educated at Abraham Shackleton’s Quaker school in Balitore and Trinity College, Dublin. In 1730 he entered the Middle Temple in London, but soon left law for literature and, later, politics. His first publication, the parodic A Vindication of Natural
Society
(1756), was followed in 1757 by A Philosophical Inquiry into the Origin
of Our
Ideas of the Sublime and the Beautiful, a text that was to influence the writers of the Romantic period. His political career began in 1765 when, having become secretary to the then Prime Minister the Marquis of Rockingham, he was made member of Parhament for Wendover. His oratory gained him influence in the Whig party, although he was not to hold office until the downfall of the Tories under Lord North in 1783. Burke became M.P. for Bristol in 1774, but his support for the then unpopular causes of Catholic Emancipation and the relaxation of the Irish Trade laws cost him the seat in 1780. Subsequently elected M.P. for Malton in 1781, he became paymaster of the forces in 1782, resigned with Fox and returned to the same office under the coalition government in 1783. He retired in 1794 and received a large pension from the ministry.
A large part of Burke’s political career was dedicated to the problem of India (he took part in the investigation of the East India Company affair) and he wrote widely on the subject. Throughout his career he wrote and spoke on many of the major governmental and constitutional issues of his day: the troubles in America resulted in his
Thoughts
on Present Discontents (1770) and Letter to the
Sheriffs
of Bristol (1777), and the French Revolution produced one of his most famous works, Reflections on the Revolution in France (1790). This latter work explained at some length his opposition to the doctrines of the revolution and it was this subject that was to be the last great political theme of his public life.
ISAAC KRAMNICK was born in 1938 and educated at Harvard University, where he received a B.A. degree in 1959 and a Ph.D. in 1965, and at Peterhouse, Cambridge. He has taught at Harvard, Brandeis, Yale, and Cornell, where he is now professor of government. He is married to Miriam Brody and lives in Ithaca, NewYork.Among his publications are Bolingbroke and His Circle,
The
Rage of Ed
mund
Burke, and numerous articles on eighteenth-century topics. He has edited The Federalist Papers, William Godwin’s
Enquiry
Concerning Political
Justice,
Thomas Paine’s Common Sense, and the Thomas Paine Reader for Penguin Classics. Most recently he is the author, with Barry Sheerman, M.P., of Laski:A Life on the
Left,
and, with R. Laurence Moore, of The
Godless
Constitution.
Each volume in the Viking Portable Library either presents a representative selection from the works of a single outstanding writer or offers a comprehensive anthology on a special subject. Averaging 700 pages in length and designed for compactness and readability, these books fill a need not met by other compilations. All are edited by distinguished authorities who have written introductory essays and included other helpful material.

INTRODUCTION
I .
EDMUND BURKE played a central role in the political history of England during the first forty years of George III’s long reign. In the House of Commons he defended the cause of the American colonies, championed the rights of persecuted Catholics in England and Ireland, criticized the parliamentary meddling of the Hanoverian monarchy, and decried the rape of the Indian subcontinent by English adventurers. In that same house he also rejected pleas for the reform of the archaic English Constitution, ridiculed efforts to lift the civil restrictions on Unitarian and other Protestant dissenters, and, most famously, called down the wrath of God and right-thinking Englishmen on the French revolutionaries and their Jacobin sympathizers in England. Burke’s historical and intellectual importance rests, however, on more than this fascinating and controversial career; he stands, after all, as the intellectual source of one of the modern world’s most influential political visions—conservatism. His writings and speeches are the bible, and he the prophet of that ideology, in much the same way that The Second
Treatise
of Government and The Communist
Manifesto
and John Locke and Karl Marx are the bibles and prophets of liberalism and communism respectively. In reviewing and assessing the historical person, role, and impact of Burke one must, thus, confront both the statesman of Georgian England and the philosopher of conservatism.
Even had Burke not become the philosopher of conservatism and been only the Whig statesman, his parliamentary role would have itself been worthy of posterity’s notice. His was a great success story: an outsider of no great means rises by dint of his own wits, skills, and energy to the inner circles of power in a closed aristocratic political community. To be sure, he never quite made it to the real pinnacles of power; instead he became the articulate defender of a class that refused to accept him as one of its own. Still, his career is linked closely with much of consequence that transpired in the public life of England in the second half of the eighteenth century.
This prophetic voice of Anglo-American conservatism was Irish, born in Dublin in 1729 to a Protestant father and a Catholic mother. He was raised in the faith of his solicitor father and schooled at Dublin’s famous Trinity College, an Anglican institution. In the 1750s Burke moved to London to study law, though he eventually turned to literary and intellectual pursuits in a circle that included Samuel Johnson and Oliver Goldsmith. After writing two well-received essays on society and aesthetics, he turned his attention to politics. He entered public life in the middle 1760s as private secretary to the great Whig magnate the marquis of Rockingham, which led to his election in 1765 to the House of Commons, where he would sit until 1794. In the 1770s, as part of Lord Rockingham’s “political connection,” he defended the American colonies in their developing clash with English commercial and imperial policy.
By 1780 he had also emerged as the principal critic of what was considered George III’s corrupt interference with the independence of the House of Commons. Although Burke saw the power of the Crown as a threat to the ancient English Constitution and its sacred principles of mixed government and the separation of power, in the 1780s he also spoke out strongly against the radical agitation associated with the Yorkshire movement and the reform effort of the Younger Pitt. Democratic enlargement of the suffrage was, he argued, also a threat to the perfectly balanced English Constitution; it would admit the people to too great a share of power.

A Place for Us by Harriet Evans
My Serbian Wolf by Charisma Knight
IM03 - Pandora's Box by Katie Salidas
The Wannabes by Coons, Tammy
Revenge of the Assassin (Assassin Series 2) by Blake, Russell
Just for You by Rosalind James
All The Pretty Lights (The "A" List #1) by Tara Oakes
The Healer by Allison Butler
Troubled Waters (Nancy Drew (All New) Girl Detective Book 23) by Carolyn Keene
Hell Transporter (Between) by Tefft, Cyndi
Our partner