Read The Prince and the Quakeress: (Georgian Series) Online

The Prince and the Quakeress: (Georgian Series) 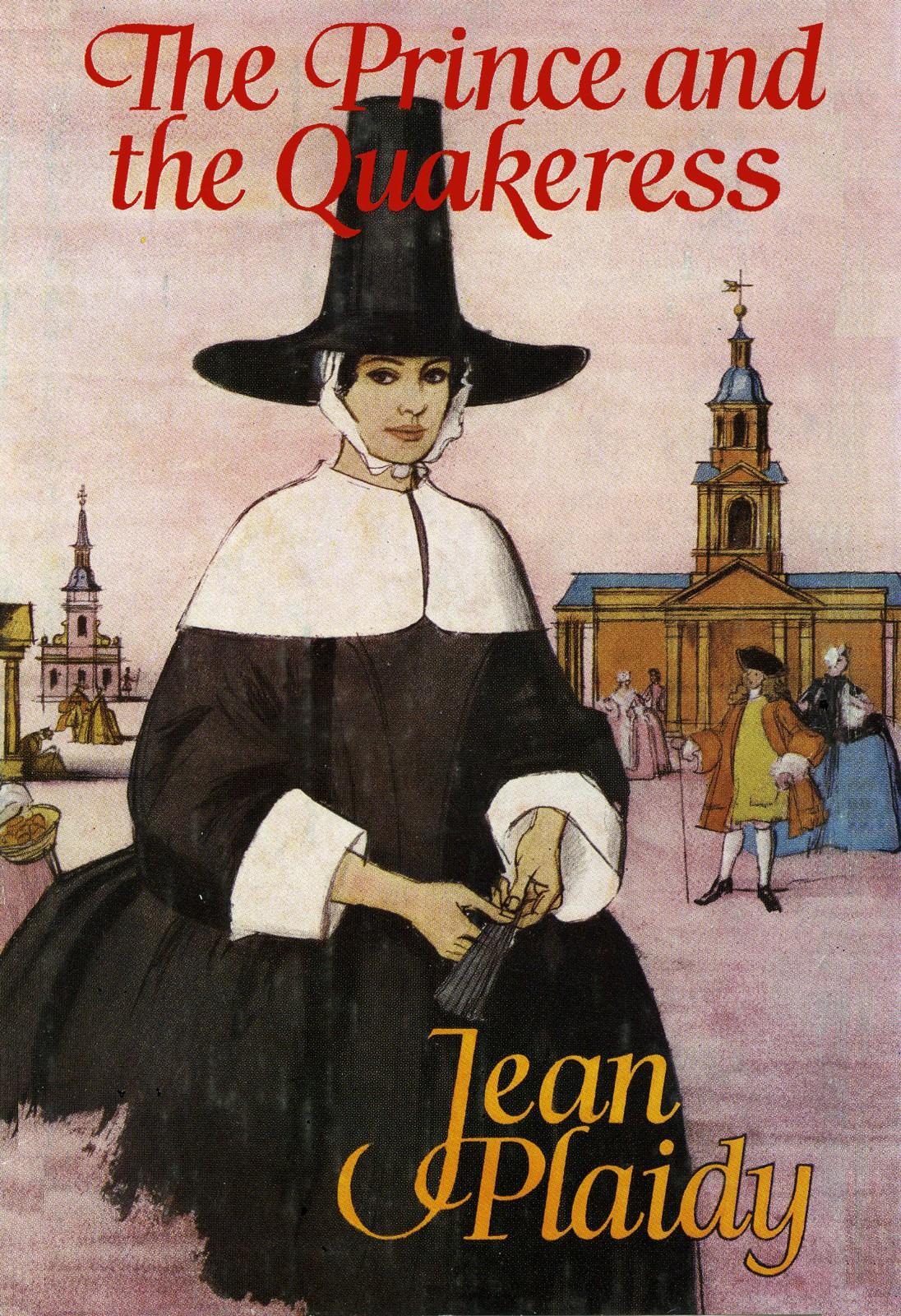 Encounter in the Rain

The Family of Wales

The Face at the Window

The Quakeress of St James’s Market

Journey in a Closed Carriage

A Slight Case of Blackmail

Visit from a Blindfolded Doctor

The Grave at Islington

The Face in the Crowd

Young and idealistic, the Prince of Wales develops a deep affection for a beautiful quakeress, Hannah Lightfoot, who catches his eye as he is riding through the streets. A first meeting is arranged, leading to several more, and eventually they discreetly marry in a secluded house where they live as man and wife. She is prepared to betray her beliefs for him, just as he is willing to defy the desires of various courtiers for her. Eventually, his mother’s lover Lord Bute uncovers the affair and Hannah mysteriously disappears.

The novel explores the lasting question, did the future George III contradict royal protocol and marry a commoner? Shortly after his affair with Hannah, he becomes King George III. After a potential engagement to Sarah Lennox falls through, he marries Princess Charlotte of Mecklenburg-Strelitz.

The fourth book in the Georgian Saga

The story of George III and Hannah Lightfoot is admittedly one of the mysteries of history. No one can be absolutely certain of what took place. There are even some who declare that Hannah Lightfoot never existed. There is, in my opinion, too much evidence from various directions for this to be likely. I believe that Hannah Lightfoot not only lived but was the mistress of George III, as Prince of Wales. There is even a report that Queen Charlotte at one time believed that the King had made a previous marriage and insisted that a second marriage ceremony should take place between her and the King, and that this was done ‘under the colour of an evening’s entertainment’. There is also the Reynolds portrait at Knole. I have based my findings on the available evidence and the character of the King; and I think my version has as good a chance of being the true one as any other.

Encounter in the Rain

THE PRINCESS AUGUSTA
was well satisfied with life. She was Princess of Wales, she had been married for eleven years to an amiable husband – unfaithful of course, but all German wives were brought up to accept that inevitability and she thought nothing of it. She was handsome, complacent and fruitful, this last asset being the most important.

The Prince was uxorious as his father had been with Queen Caroline and all were aware of how
he
had expected
her
almost to take a part in his affairs with other women, expressing her approval, doing all she could to help him as he would say to ‘his pleasure’. It was a Court joke. Not that Frederick went as far as that – in fact he was an improvement on his father. He never flaunted his women under her nose; and he was without that irascible temper which was so amusing when directed against others and so alarming when turned on oneself. After all, the little man was the King – and the bombastic, strutting, dapper, choleric creature would never allow anyone to forget that.

‘A pox on him!’ murmured Augusta pleasantly.
And
on that Walmoden woman whom he had wasted no time in bringing
to England; and while he publicly wailed that no one would ever replace his beloved defunct spouse, he was sporting with Walmoden in private. But the son of that union – Monsieur Louis whom Madame Walmoden had brought with her to England (no doubt seeing high honours for him there) – should never be recognized, if Augusta could help it; and she might well be in a position to decide, for the King, in spite of his high colour – or perhaps because of it – did not seem to her a healthy man; and when he had followed his dear Caroline to the grave it would be the turn of Frederick and Augusta.

King and Queen of England! Oh no, Monsieur Louis, there will be no place for the old King’s bastards when his son and daughter-in-law come to the throne. Louis was about two years older than her own George.

She was mildly sad when she thought of George. Such a puny little fellow he had been when he was born – a seventh-month child arriving so unexpectedly on that hot June day instead of waiting for August which was his allotted delivery date.

‘And I never thought we should rear him,’ she murmured. But one of the gardeners had an accommodating wife. What a woman! What a chest! What milk! Why were those people always so much more lavishly supplied? She had been a good woman who took to the child as though he were her own and suckled him and guarded him so that in a few months he made up for that early arrival.

George Frederick William! He would be Prince of Wales when the old man went and Frederick became King. Perhaps it would have been better if Edward had been the elder. George was so
meek
. That was it … meek. And he could not learn. It was not that he did not try. George tried very hard, for George was a good boy. He would do everything he was told; that was why it was so necessary to watch him for fear the wrong people might do the telling; Princess Augusta was determined that only one person should; and that was herself.

She smiled and decided to visit the nursery. Frederick was probably already there. He liked to be with the children and was a good father to them in as much as he showered them with affection and they in return adored him. People might laugh at Frederick but he was a good parent. Queen Caroline,
who was reputed to have been a wise woman, had said of him: ‘My dearest firstborn is the greatest ass, the greatest liar, and the greatest
canaille
and the greatest beast in the whole world, and I heartily wish he were out of it.’

German candour! But although the English laughed at it – and one had to admit laughed at Fred – they did not admire it. Perhaps they would have been disappointed if there were not quarrels in the royal family. Who knew? But at the same time they cheered wildly when she appeared with the children and they approved – outwardly – of a pleasant family life. Fred at least was not quarrelling with
his
son as his father had quarrelled with him and his grandfather had quarrelled with his father. Quarrelling in German families seemed the natural thing to do. But Fred was different; he loved his sons and his sons loved him.

Yes, Fred was doubtless paying a visit to the nursery before they set out for the races.

Augusta rose from her dressing-table where her women had been attending to her toilette and declared her intention of looking in at the children.

Cliveden, the country home of the family of Wales, had been rented by Frederick from Lady Orkney. Here the Prince and Princess of Wales could entertain lavishly and at the same time shut themselves away from the King’s Court. In fact they could build a little Court of their own, and their friends were only too ready to encourage them in this. The house was charmingly situated, being set on a terrace which stood high above the river. The gardens were cultivated to appear natural and thus supply the maximum charm. Daisies and buttercups mingled with lilies and roses; and because of his love of the theatre Frederick had ordered that a stage be built near the river. This spot was shut in by yews which formed a natural theatre, and it was greatly appreciated by visitors to Cliveden; and as Frederick shared his family’s enthusiasm for music it was most frequently used for concerts, when orchestras would be brought from London to Cliveden to entertain the guests. The children were encouraged to take part in these theatrical entertainments and when they performed, the Prince and Princess would make it a gala occasion.

Frederick was very popular in the district, living simply with
his family, mingling with their neighbours and even playing the cello in the local musical group.

Life at Cliveden was not devoted entirely to these diversions. Ambitious men found their way to what was called the Prince’s Court in opposition to that of his father. William Pitt came often, Chesterfield, Stair and Bolingbroke – men with their eyes on the future, for choleric George was well past his youth and it was believed that one of these days he would not survive a particularly violent outburst of rage. It was wise therefore to attach oneself to the rising star and this appeared to be the resolve of these ambitious men.

Reunited with the Cowboy by Carolyne Aarsen
A Wanton's Thief by Titania Ladley
Screw Everyone: Sleeping My Way to Monogamy by Ophira Eisenberg
2007 - Salmon Fishing in the Yemen by Paul Torday, Prefers to remain anonymous
Fracture by Amanda K. Byrne
About a Vampire by Lynsay Sands
Grievous Sin by Faye Kellerman
A Sound Like Hope (Fallen Tuesday #3) by Karolyn James
Twanged by Carol Higgins Clark
All About the Money (A Jesse Watson Mystery Series Book 7) by Ann Mullen
Our partner